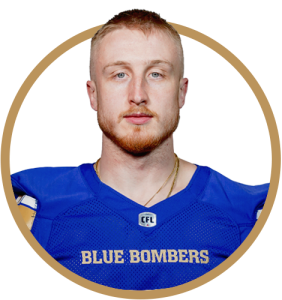 Hallett built on his rookie campaign with a solid 2021 season that established him as one of the top special-teams players in the CFL while playing a important role in helping the club capture a second Grey Cup championship. Hallett had 16 tackles on the kick-cover units in 2021, a total which tied for the fourth-highest total in the league, and  Over his first two years with the Bombers only one player registered more tackles on specials than Hallett — all-time leader Mike Miller, who had 50. He also took some snaps on defence, chipping in with seven tackles while also managing to force one fumble.
Hallett agreed to a two-year contract extension with the club on January 3, 2022.

The Bombers found some gold at the end of the 2019 CFL Draft, Hallett among them. Selected in the seventh round, 61st overall, Hallett dressed for all 18 regular-season games and two of the three playoff contests — missing the Western Semi-Final due to injury. He was solid on special teams, finishing with 13 tackles while adding a forced fumble and a fumble recovery. His 13 special-teams tackles ranked third on the club.

Hallett Appeared in 28 games with the Varsity Blues over six seasons. He played in just three games in 2018 because of injury but recorded 13 tackles, one forced fumble, one fumble recovery and one touchdown. In 2017, he led the Blues and ranked fourth in the OUA with 60 tackles, adding one sack, two fumble recoveries, one interception and five break ups.