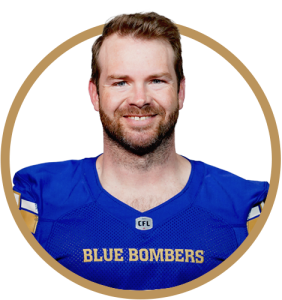 Benson’s first year with his hometown team was a memorable one, as he played an integral role in a dominant season capped by victory in the 108th Grey Cup. The club’s long-snapper and a reserve linebacker, Benson played in all 14 regular-season games and both the Western Final and Grey Cup, capturing the first championship of his career.
A veteran CFLer with eight years experience, Benson played in his 100th career game against B.C. on October 23, 2022 and now has 103 regular-season games to his name.
Benson first joined the Blue Bombers as a free agent in February of 2021 and signed a one-year contract extension to remain with the club on January 24, 2022.

Benson was first signed by Edmonton in 2012 and played three games that season. He spent 2013 on the club’s practice roster and was then signed by the B.C. Lions in August of 2014. He spent the next five seasons in Vancouver, appearing in 81 games. Benson was then signed by Ottawa in the summer of 2019, and dressed for five games for the RedBlacks that season.
He signed with the Montreal Alouettes as a free agent in 2020, but his contract expired without him playing a game for them following the cancellation of the CFL season.