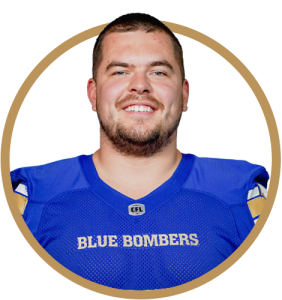 Couture started at centre for all 14 regular-season games in 2021, along with the Western Final and 108th Grey Cup victory. He has been a consistent force in the middle of the best offensive line in the league since assuming the starting role at the beginning of the 2019 season.
This past year Couture was part of a unit that helped the Blue Bombers lead the CFL in scoring, finish second in rushing while surrendering the fewest quarterback sacks. As a result, his work was recognized by his peers as he was named to the 2021 CFL Players’ Association All-Star Team.
Couture signed a one-year contract extension to remain with the club on January 31, 2022.

Couture took over the starting centre chores after the retirement of Matthias Goossen and was an integral part of an offensive line that helped the Bombers lead the league in rushing and was critical in Andrew Harris capturing his third straight rushing title.
Couture started all 18 regular-season games before suffering an injury in the Week 20 victory over the Calgary Stampeders. He was placed on the injured list through the team’s playoff run to the 107th Grey Cup. Couture had not missed a snap in his four-year career with the Bombers before that injury, dressing for all 72 games from 2016-19.
On February 10, 2020 — one day before CFL free agency — Couture signed a two-year contract extension to remain with the club.

Couture continued his evolution with the Bombers in 2018, once again dressing for all 18 games and starting two, in the process extending his consecutive games-played streak to 54. He made his first career start in the Banjo Bowl against Saskatchewan and then took the first snaps again in the regular-season finale in Edmonton. His involvement in the offence increased significantly, as he worked extensively in the team’s two tight-end set and caught his first career pass, a seven-yard reception in a game in Hamilton on June 29th.
Couture signed a one-year extension to remain with the club on January 22, 2019.

Has played in all 36 games and both playoff contests in his first two seasons with the club after being drafted in the second round (10th overall) in 2016… Can play guard, tackle and centre and has been a part of the team’s short-yardage package.

Couture played four seasons at Simon Fraser, making 36 starts over that span. He showed great versatility during his career, spending time at four different positions on the offensive line. Was a Great Northwest Conference First Team All-Star at centre in 2014 and at tackle in 2015.