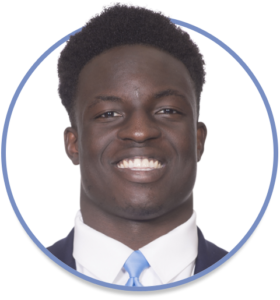 Awe suited up for 10 games for the Argos in 2019 before an injury on Labour Day cost him the rest of his season. He had 44 tackles, six more on special teams, with one sack and an interception. Arguably his best game of ’19 came in a July 12th win over Winnipeg, in which he registered seven defensive tackles, two special-teams tackles while also forcing a fumble.

Awe signed a two-year contract with the Bombers on February 18, 2020.

Awe appeared in 25 games for the Lions over the 2017-18 seasons — including 16 starts — recording 129 defensive tackles, 25 special teams tackles, one sack, one interception and two forced fumbles. The Lions released Awe in January of 2018 so he could sign with the New York Jets. He was waived by the Jets in late April of that year and rejoined B.C. in August, suiting up for seven games.

Awe first came to the CFL in 2017 after signing with the Tampa Bay Buccaneers in 2016 and spending time on the team’s practice roster.

Awe spent four years at Texas Tech, racking up 171 solo tackles, seven tackles for a loss and a sack in 51 games. As a senior and defensive captain in 2015, Awe had 77 tackles to lead the Red Raiders and finish second in the Big 12. Those numbers helped him earn an All-Big 12 Honorable Mention.