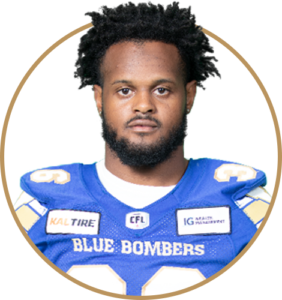 Maston was signed by the Bombers on August 4, 2019 after two years with the Edmonton Eskimos and a stint with the Philadelphia Eagles in 2019 before his release. With the Bombers riddled by injuries in the secondary, Maston dressed for his first game against Calgary less than a week after his arrival and made his first start for Winnipeg a week later in a home win over B.C. Maston was injured in that game and did not return until the final regular-season game where he lined up at the Dime spot, a position he held down through the playoffs, including the Grey Cup. He was solid in the postseason, picking off a pass in the Western Semi-final, registering six tackles and a sack in the Western Final and then adding five tackles in the Grey Cup.
Maston signed a contract extension with the Bombers on December 9, 2019

Maston originally signed in Edmonton during the 2016 practice-roster expansion and then appeared in 19 games over two seasons with the Eskimos in 2017-18 picking up 57 tackles and two interceptions. Just prior to the a game against Calgary on September 9, 2017, Maston suffered a torn Achilles during the warm-up, but he did recover to return to the Eskimos lineup the following August.
The Eskimos released him in December of 2018 so he could pursue NFL opportunities, and he signed with the Eagles in January of 2019.

Maston began his collegiate career with the Bakersfield College Renegades of the California Community College Athletic Association in 2011, and helped the school win a CCCA championship a year later. He then transferred to Boise State and appeared in 25 games, with five starts, in two years, recording 71 tackles and one interception.