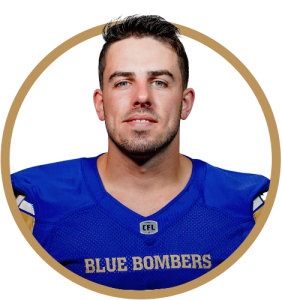 Liegghio dressed for all 14 regular-season games and both the Western Final and Grey Cup in his rookie season, handling the punting chores for every game, finishing with a 43.7-yard average and placing seven punts inside the opponents’ 10-yard line, tied for third-most in the CFL. His 61.6-yard kickoff average was ranked fourth.
Liegghio was also the club’s field-goal kicker for three games, going 4-of-4 — including a game-winning 50-yarder — in a win over Calgary in late August. He finished the year connecting of 5-of-8 (62.5 percent) and posted the same numbers in his converts.

Liegghio played four years at Western University, leading all U Sports punters in 2019 with a 47.5 yard punt average, setting a new OUA record. Liegghio also lead the league in extra points made (31) and total kickoff yardage (1,757) and finished with a 92% field goal percentage. He was selected by the Blue Bombers in the fifth round, 39th overall, in the 2020 CFL Draft with a pick that was acquired from the Toronto Argonauts in the Zach Collaros trade.