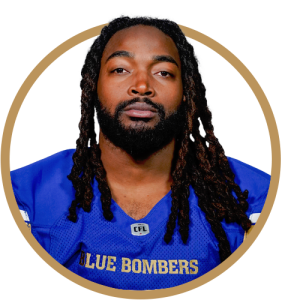 Thompson was first signed as an undrafted free agent by Calgary in 2019, but was released.
He dressed for two games with the Tiger-Cats in 2021 — November 5th vs. B.C. and a week later against Toronto — and registered two tackles.
Thompson signed with the Blue Bombers on January 5, 2022.

Thompson was a three-time Ontario University Athletics All-Star during his days at Wilfrid Laurier. He was named as a second-team all-star in 2015, a first-team selection in 2016 — as well as an All-Canadian — followed by a first-team OUA selection in 2018. Over his career he has also overcome two ACL tears.