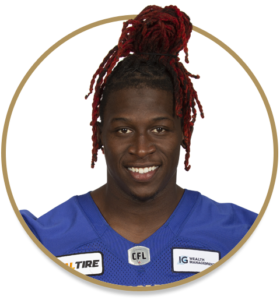 Whitehead had a solid 2019 season, his first in the Canadian Football League. He started 15 games for the Bombers, pulling in 52 passes for 521 yards and two touchdowns and rushing nine times for 92 yards and a score on offence. His 52 receptions ranked second on the club to the 70 by Andrew Harris and he finished fifth in receiving yards.
He enjoyed a breakout game in the Bombers home opener, finishing with seven receptions for 155 yards and two touchdowns in a win over the Edmonton Eskimos.
Whitehead also contributed on special teams, with 20 kickoff returns for 596 yards, including a spectacular 104-yard touchdown return on the opening kickoff in a home win over Toronto on July 12th. He added seven punt returns for 54 yards and two missed field-goal returns for 62 yards. He did not dress for the playoff games.
Whitehead was signed by the Bombers on May 9, 2019 after standing out at the club’s free agent camp in Florida in April.

The Jets claimed Whitehead off waivers on July 26, 2017, but less than a month later he needed surgery on a fractured foot. Whitehead was on and off injured reserve and the practice roster, before being activated to the active roster on December 30, 2017. He was released by the Jets on August 31, 2018.

Whitehead was signed by the Cowboys as an undrafted free agent in 2015 and dressed for 15 games in both the 2015 and 2016 seasons, with two starts. During that time, Whitehead had 1,151 total return yards, 189 rushing yards and nine receptions for 64 receiving yards. He was released by Dallas in July of 2017.

Whitehead began his college career at Dean College in Massachusetts where he was a First Team All-American and All-Conference honours. He transferred to Florida Atlantic in 2013 and in 2014, as a senior and starter, he pulled in 76 passes for 706 yards and six touchdowns, adding 21 carries for 210 yards and two touchdowns while averaging 24.7 yards on kickoff returns. Those numbers earned him First-Team C-USA honours, and he was also named the Owls offensive MVP.