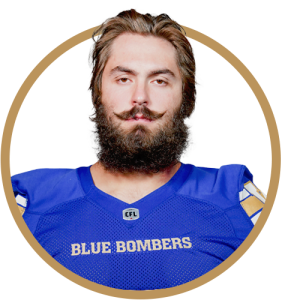 Dobson signed a two-year contract with the Blue Bombers on May 20, 2022. He was the club’s first pick, 3rd overall, in the 2021 CFL Draft and came to Winnipeg after attending NFL mini-camps with the Chicago Bears and New Orleans Saints in May.
He had also been selected  23rd overall by the New Orleans Breakers in the 2022 USFL Draft but did not play because of visa issues.
Dobson enjoyed a standout college career at the University of Maine from 2017-2020 and, after transferring, at Texas State for the 2021 season. Dobson was a 2020 preseason All-America Third-Team selection by Hero Sports and 2020 preseason First-Team All-Colonial Athletic Association by Phil Steele. He was selected Stats FCS Third-Team All-America and First-Team All-CAA in 2019 and was voted Maine’s Outstanding Offensive Lineman after starting all 12 games and averaging 12 knockdowns per game in 2019. Dobson was Maine’s highest-graded offensive lineman in every game as a junior before transferring to Texas State.