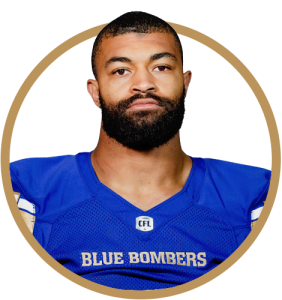 It could be argued that Wilson is one of the most-underrated players in the Canadian Football League, although his versatility and playmaking ability are certainly appreciated by the Bombers. Wilson started all 18 regular-season and three playoff games for the club, primarily at the weak-side linebacker spot, but also in the middle when Adam Bighill missed time earlier in the year.
Wilson finished third on the club in defensive plays, with 63 defensive tackles and four on special teams along with three sacks, one interception, five pass knockdowns, three fumble recoveries and three tackles for losses. He was sensational in the Grey Cup game, registering five tackles and a pass knockdown on a two-point conversion attempt.
Wilson signed a two-year contract extension on January 13, 2021.

Wilson dressed for five regular season and two playoff games for the Bombers, starting in the postseason for an injured Jovan Santos-Knox. Wislon had five tackles in the regular season, and in his two playoff starts combined for four tackles, one tackle for loss and one sack.

Signed by the Bombers in April, was released on June 17 and then added to the practice roster a month later… Appeared in one game for the club in 2017, dressing for the Banjo Bowl against Saskatchewan on September 9 and made one tackle on special teams… Signed as an undrafted free agent with the Oakland Raiders in 2016.

A three-year starter at Fresno State… Wilson finished his college career with 251 combined tackles (144 solo), 14.5 tackles for loss and two interceptions in 38 starts at linebacker… As a senior in 2015 he had 74 tackles, three tackles for losses and two forced fumbles.