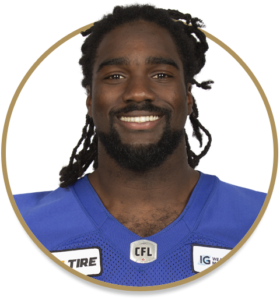 Exumé was one of the late-round gems unearthed by the Bombers in the 2019 CFL Draft, having been selected in the eighth round, 71st overall, and quickly morphing into one of the best special-teams players in the league. His impact was immediate, as in the Bombers season-opening win in B.C. on June 15th he registered five special-teams tackles — just two off the club’s team record of seven, shared by Brendan Rogers (1994) and Mike Miller (2019) — and, unofficially, a league record for a player in his debut.
His 25 special-teams tackles not only tied for the team lead with Miller, but was second in the CFL to Toronto’s Frank Beltre, who had 27.

Exumé  played in 22 games over four seasons with the Carabins. In 2018, he registered 11 tackles, two pass breakups and two interceptions, one of which he returned for a touchdown.