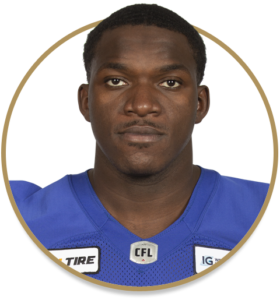 The Bombers selected Kongbo in the first round, 5th overall, of the 2019 CFL Draft. He arrived in training camp recovering from a serious knee injury from his last game in college with the University of Tennessee in October of 2018, but worked tirelessly with the Bombers training staff to get back on the field.
Kongbo made his CFL debut against the Toronto Argonauts on August 1, 2019 and suited up for 12-regular season games, registering 10 tackles and a quarterback sack. He was also in the lineup for all three playoff games in the club’s 2019 Grey Cup run and made a couple of critical stops in the West Final victory over the Saskatchewan Roughriders.
Kongbo was released by the Bombers on December 5, 2019 to pursue NFL opportunities and signed with the San Francisco 49ers on January 1, 2020. He had a solid camp with the 49ers in 2020, but after suffering a groin injury was waived with an injury settlement on September 4.
Kongbo joined The Spring League in late May of 2021 and dressed for one game with the Sea Lions. He signed a one-year contract to return to the Blue Bombers on June 7, 2021.

Kongbo played 30 games, starting 17, over three seasons with the Volunteers as a linebacker and defensive lineman. He totalled 51 tackles, 5.5 tackles for loss, 3.5 sacks, two interceptions (including a 50-yarder returned for a touchdown), and two knockdowns. He won the 2018 John Stucky award as Tennessee’s best performer in the weight room.