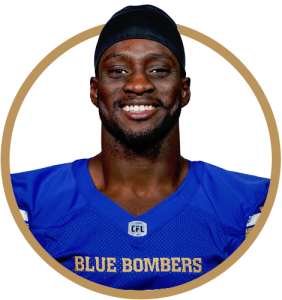 Augustine posted the best rushing totals of his career in 2021, rushing 40 times for 285 yards and a sparkling 7.1-yards per carry average as part of an all-Canadian backfield that also included Andrew Harris and Brady Oliveira. His rushing totals placed him 16th in the CFL and, combined with Harris (623) and Oliveira (429) the three Canadians amassed 1,337 yards along the ground.
He appeared in all 14 regular-season games and both playoff contests in 2021 and in his lone start — the regular-season finale in Calgary — Augustine rumbled for 148 yards on 23 carries, the first 100-yard rushing game of his career.
On February 3, 2022 Augustine signed a two-year contract extension to remain with the club.

Augustine began the season on the practice roster for the first two games, but proved to be a valuable contributor by season’s end. Augustine rushed 38 times for 242 yards in 2019, adding another six receptions for 92 yards and a touchdown. Made his first CFL start in the annual Labour Day Classic, rushing 12 times for 98 yards while adding four catches for 17 yards. Followed that up with a solid outing a week later in the Banjo Bowl in his second start, with 75 yards along the ground on 16 carries and 63 yards on two receptions — including a 58-yard touchdown on a pass from Chris Streveler.
Augustine signed a two-year contract extension with the club on December 27, 2019.

Augustine was signed by the Blue Bombers on May 16th. He was not selected in the 2017 CFL Draft, but was signed by the Edmonton Eskimos and invited to their training camp that year. He returned to university after camp and was then signed by the Saskatchewan Roughriders last February before being released before training camp.
Augustine earned a spot with the Bombers after an impressive training camp in 2018 that included rushing eight times for 81 yards and a touchdown in a preseason win over Edmonton. He dressed for nine regular-season games, rushing seven times for 51 yards and a touchdown — all those touches coming in the club’s regular-season finale in Edmonton. Re-signed with the club on December 4th, 2018

Augustine played five seasons with the Guelph Gryphons, rushing for 2,742 yards and 28 touchdowns on 483 rushes. In his senior year, Augustine rushed for 690 yards and nine touchdowns on 122 carries.