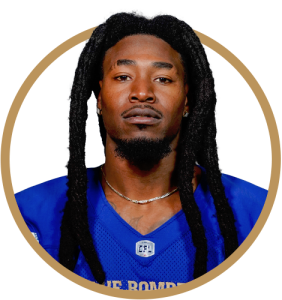 An injury suffered in the 2021 season opener ultimately limited Grant to six regular season and two playoff games in 2021, but he still managed to lead the Blue Bombers in both punt and kickoff return yardage, returning 34 punts for 375 yards and one touchdown and 12 kickoffs for 283 yards.
He also added nine punt returns for 64 yards and seven kickoff returns for 155 yards, combined, in the Western Final and the Grey Cup victory.
Grant re-signed with the Blue Bombers on April 12th, 2022.

Grant was added to the Bombers practice roster in July of 2019 and proved to be one of the shrewdest in-season additions not only in Winnipeg, but across the Canadian Football League. Grant appeared in 11 regular-season games and the three playoff contests as a designated import, lining up occasionally at receiver and serving as the club’s primary kickoff returner.
Despite playing in just 11 games, Grant led the Bombers with 591 yards on 41 punt returns — three for touchdowns — and also paced the club with 600 yards on 25 kickoff returns. In addition, he returned one missed field goal for 61 yards. He ranked sixth in the CFL in punt-return yards and eighth in kickoff-return yards.
Grant’s Bomber debut, coming on August 8 vs. Calgary, was simply sensational as he returned two punts for touchdowns and finished the game with 306 yards in punt and kickoff return yards. His 222 punt-return yards established a Bombers club record and ranked as the third-highest single-game in CFL history behind only Edmonton great Henry ‘Gizmo’ Williams (232 vs. Ottawa, 1991) and Keith Stokes, then of Montreal (224 vs. Edmonton in 2002).
Grant came to the Bombers after attending training camp with the Hamilton Tiger-Cats in 2019. He first broke into the professional ranks as an undrafted free agent, signing with the Baltimore Ravens on May 7, 2018. He made the Ravens final roster as the primary kick and punt returner, but was released in late September of that season.
Grant signed a one-year contract extension to remain with the Blue Bombers on February 4, 2021.