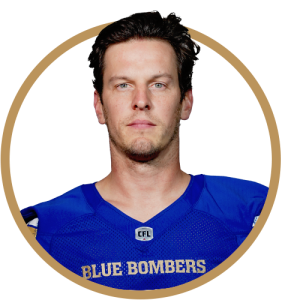 Ellingson, who signed a one-year contract to join the Blue Bombers on February 8, 2022, appeared in 10 games in 2021 for the Elks, finishing with 47 receptions for 687 yards and one TD. Those numbers came in pandemic-shortened CFL campaign ending his streak of five consecutive 1,000-yard seasons.
Ellingson ranks in the CFL’s Top 50 in career receiving yardage, having amassed 7,952 yards on 549 yards and 42 touchdowns over 117 regular-season games with the Hamilton Tiger-Cats, Ottawa RedBlacks and Elks.
In 2019, he led Edmonton in receiving with 86 catches for 1,170 yards and five touchdowns while being named to the West Division All-Star team, with his yardage total placing him fifth in the CFL.

Ellingson enjoyed four sensational seasons with the RedBlacks, posting four consecutive 1,000-yard campaigns from 2015-18 after signing in Ottawa as a free agent. He was a CFL All-Star and Ottawa’s Most Outstanding Player in 2017 and an East Division All-Star three times and is fondly remembered in the capital region for his game-winning touchdown in the 2015 Eastern Final that helped propel the franchise to the Grey Cup. Ellingson would make two visits to the Grey Cup during his days in Ottawa and was part of the franchise’s 2016 championship.
In his four seasons with Ottawa, Ellingson had 332 receptions for 4,866 yards and 30 TDs.

Ellingson first came to the CFL in 2013, signing with the Tiger-Cats on May 30th of that year. He had 52 receptions for 800 yards and six touchdowns in just 12 games that year, following that up with 32 catches for 429 yards in nine games a year later.

Ellingson signed his first pro contract in 2011 with the Jacksonville Jaguars as an undrafted free agent. He has also played or had stints with the New Orleans Voodoo and Tampa Bay Storm of the Arena League as well as the Tampa Bay Buccaneers.
Ellingson played his college ball at Florida International University, catching 131 passes for 2,108 yards and 14 touchdowns in 48 games.