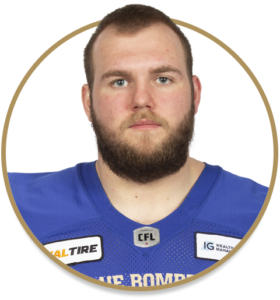 The Bombers selected Desjarlais with the first of their two first-round draft picks in the 2019 CFL Draft, choosing him fourth overall, followed by Jonathan Kongbo at fifth overall. The Bombers had acquired that extra pick — the Desjarlais selection — from B.C. in a 2018 draft-day deal in which Winnipeg traded the seventh and 16th-overall selections in 2018 for the 12th selection in 2018 and the Lions original first-round pick in 2019.
Desjarlais not only made the opening-day roster, but would ultimately start 10 regular-season and three playoff games at guard. His first start came against the B.C. Lions on August 15 and Desjarlais would then be a fixture in a starting unit that helped the Bombers lead the league in rushing and have Andrew Harris capture his third-straight rushing title.

Desjarlais spent four seasons at the University of Windsor, playing and starting 27 games over that time at both right and left guard. He played for the West Team in the U SPORTS East-West Bowl last season and was named an OUA second-team all-star.