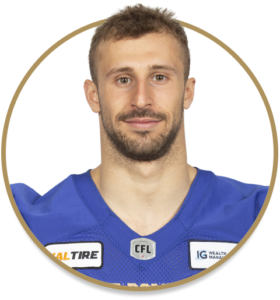 Petermann build on his rookie season with steady improvement in his 2019 campaign, finishing with 15 receptions for 118 yards and a touchdown. He dressed for all 18 regular-season games, starting two — the second and third of his career — and was in the lineup for the three playoff games.

Petermann was selected in the third round, 26th overall, in the 2018 CFL Draft and made an immediate impression by dressing for all 18 games and pulling in 10 passes for 154 yards and one touchdown. Caught his first career pass in a win over Montreal on June 22nd and his first touchdown in the Banjo Bowl, a game in which he finished with four receptions for 67 yards. Made his first CFL start in Edmonton on September 29th.