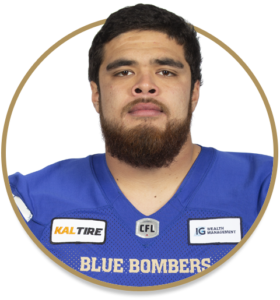 Eli, who goes by ‘Tui’, was another member of the Bomber excellent 2019 CFL Draft class. Selected in the fourth round, 34th overall, Eli dressed for five games in the regular season, serving a back-up centre and sixth offensive lineman in short-yardage situations and is considered a solid prospect going forward.

A product of the University of Hawai’i, he appeared in 36 games over three seasons with the Rainbow Warriors. A redshirt junior in 2017, Eli was a key member of the line that helped UH to its best rushing average (168.2) in 22 years and recorded 22 knockdowns on the season. Eli was named to the pre-season Rimington Award watch list for the second straight year in 2017 and was also named the Polynesian College Football Player of the Year Watch List prior to the season. He missed all of 2018 due to injury.