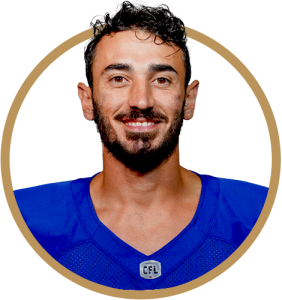 Mourtada joined the Blue Bombers on August 30, 2021 and was the club’s placekicker for five games, beginning with his CFL debut in Edmonton on September 18. He finished the year connecting on 8-of-15 field-goal attempts (53.3 percent) and was 17-of-18 in converts.
He also averaged 66.7 yards on 28 kickoffs, which ranked second in the CFL.

Mourtada made his pro debut with the Wichita Falls Nighthawks of the Indoor Football League in 2015 and also played for the Las Vegas Outlaws in the same league. He had a tryout with the Cleveland Browns in 2017, and then kicked for the Massachusetts Pirates of the IFL in 2018. He did not play in 2019 or 2020, but returned to play for the Pirates in 2021.

Mourtada played his college football for the Pace Setters from 2008-11. He appeared in 31 games and connected on 14-of-27 field-goal attempts while averaging 37.8 yards as a punter.
After his days at Pace, Mourtada played for the Assumption Greyhounds while he worked on his master’s degree in rehabilitation counselling.