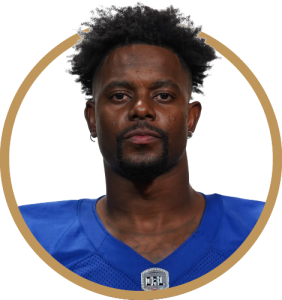 The Blue Bombers landed Darby, Jr. in a trade with the Hamilton Tiger-Cats on October 4th in exchange for defensive end Cedric Wilcots II. He had signed with Hamilton in free agency on February 10th, 2022.

The Blue Bombers acquired Darby, Jr. in a trade with the Toronto Argonauts on July 19, 2021 in exchange for American offensive lineman Terry Poole and the veteran defensive back quickly transitioned into the club’s dominant defence.
Darby, Jr. started nine regular-season games plus the Western Final and Grey Cup, registering 34 tackles, one tackle for loss and a pass knockdown. He was solid in the playoffs, adding two tackles and a sack in the Western Final win over Saskatchewan and six tackles, a pass knockdown and interception in the Grey Cup victory over Hamilton.

Darby, Jr. first signed with the Argonauts in July of 2017 and appeared in 43 games over three years with Toronto, finishing with 137 tackles, one sack and eight interceptions. He was a member of the 2017 Grey Cup champion Argonauts, although he was on the injured list and did not play in the game.

Darby, Jr. played his college ball at Arizona State and had 10 interceptions during his days with the Sun Devils.
He signed as an undrafted free agent with the San Diego Chargers in 2014 and had NFL looks with the Pittsburgh Steelers, New Orleans Saints and Indianapolis Colts.