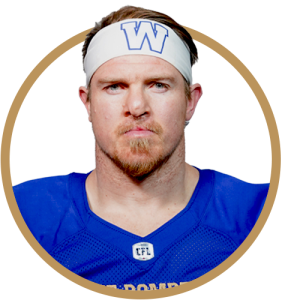 Bighill’s fourth season with the Blue Bombers was every bit as dominant as the previous three.

The veteran middle linebacker led the Blue Bombers in total defensive plays in 2022, registering 72 tackles along with two sacks, one interception and one tackle for a loss. He was named a West Division All-Star for the eighth time in his career and a CFL Players’ Association All-Star for a fifth time.

Bighill signed a two-year contract extension to remain with the club 0n November 29, 2022. He was scheduled to become a free agent in February 2023.

One of the most decorated defenders in league history, Bighill’s 2021 season was one of his finest as he led the CFL’s stingiest defence with 70 tackles and added two quarterback sacks, two interceptions and two fumble recoveries – one for a touchdown. He was busy in the playoffs, too, registering eight tackles in the Western Final and another five in the 108th Grey Cup.
Those numbers not only earned him his a spot on the CFL All-Star Team for a sixth time, but also saw him named the league’s Most Outstanding Defensive Player for the third time in his career after winning in his first season with the Blue Bombers in 2018 and in 2015 as a member of the B.C. Lions.
After the season, Bighill was named the 2021 winner of the Ed Kotowich ‘Good Guy Award’ which acknowledges the player who has ‘excellent football ability, is a leader in the locker room and shows outstanding effort in the community.’
Bighill signed a one-year contract extension to remain with the club on January 20, 2022.

Bighill put up solid numbers in 2019, despite missing three games due to injury. He finished with 61 tackles, four quarterback sacks, two forced fumbles, two interceptions, two tackles for a loss and a pair of pass knockdowns in his 15 regular-season games, all starts, while being named to the CFLPA All-Star Team. His 675 career defensive tackles now ranks him 10th on the CFL’s all-time list.
Bighill remains one of the club’s most-influential players and leaders on the field and in the community and he and his family became Winnipeg residents after he signed a three-year contract extension on January 15, 2019.

Bighill joined the Bombers on May 19, 2018 and his impact was immediate. He recorded 105 tackles while adding four sacks, four tackles for loss, a fumble recovery, two interceptions (one returned for a touchdown), and a league-leading four forced fumbles. His 127 defensive plays were the third-most in the league last season. He was not only named to the West Division All-Star Team for a sixth time, but was selected to the CFL All-Star squad for a fifth time and was honoured as the league’s Most Outstanding Defensive Player for the second time in his career.

Bighill signed a reserve/futures contract with the Saints on January 4, 2017. After standing out during training camp and in the preseason, Bighill was able to dress for three games for New Orleans before being released on May 14, 2018.

Bighill suited up for six seasons with the Lions,  recording 509 defensive tackles, 70 special teams tackles, eight interceptions, eight forced fumbles and 33 sacks in 99 career CFL games (85 starts). He was a four-time CFL All-Star and five-time West All-Star with the Lions and was a member of their 2011 Grey Cup championship team. In 2015, Bighill led the CFL with 117 tackles and was named the league’s top defensive player.
Bighill was twice named the Lions Most Outstanding Player (2013, 2015) and was honoured as their Most Outstanding Defensive Player on three occasions (2012, 2013 and 2015).

Starred at Central Washington from 2007-10, racking up 163 solo tackles — 46 of which were for a loss — along with 11 sacks and seven interceptions in 44 games. He was CWU’s 2010-11 Co-Male Athlete of the Year and earned a starting spot and team captaincy in the Division II All-Star Game in January of 2011. He was also named a First-Team Division II All-American.