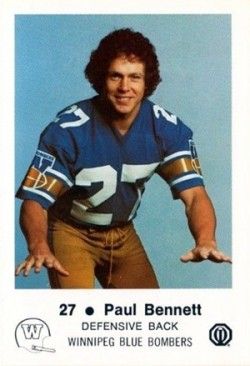 Paul Bennett was already an all-star when the Bombers traded with the Toronto Argonauts in 1980, sending their first territorial-exemption pick in 1981 and their first-round draft choice in 1980 to land the talented Canadian defensive back. He made an immediate impact, intercepting seven passes in 1980. A gifted punt returner, he led the league in 1977 (with Toronto), and in 1982 and 1983 as a Bomber. He was traded back to Toronto in June of 1984 for cornerback Donovan Rose and a first-round pick in 1985 and finished his career in Hamilton in 1987 after 11 CFL seasons. Upon his retirement he was the CFL’s all-time punt return yardage leader with 6,358 yards (since surpassed by Henry Williams). He still lives in Winnipeg.