Less Browne was already one of the best cornerbacks in the CFL when he signed with the Bombers as a free agent in 1989. Browne would play in 51 regular-season games for the Bombers from 1989-91 and was an integral part of the club’s dominant defence that was the backbone of teams that played in East Division Finals in each of his three seasons in Winnipeg and was instrumental in the 1990 Grey Cup championship. 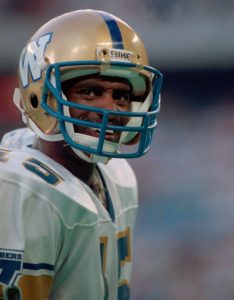 A shut-down cornerback opposite Rod Hill, Browne has 27 interceptions in his 51 games as a member of the Bombers, including three seasons of double-digit totals – including league-best totals of 14 in 1990 and 10 in 1991. The 14 interceptions in ’90 are a Bombers team record and when he retired the 273 yards in interception returns he had that season was a CFL record (since surpassed by three players).

Browne was an East-Division and CFL All-Star in both 1990 and 1991 with the Bombers before being traded to Ottawa in May of 1992 for Gerald Wilcox. He finished up his career with the B.C. Lions in 1993 and was inducted into the Canadian Football Hall of Fame in 2002.

Browne would join the Bombers coaching staff in 1999 under Dave Ritchie and spent 1999-2003 as the club’s linebackers coach, before coaching defensive backs in 2004.