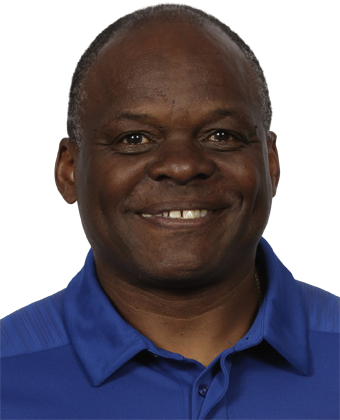 Richie Hall returns for his fifth season as Defensive Coordinator of the Blue Bombers and will continue his long association with the Canadian Football League, first as a player and now as a coach.

Hall’s defence was solid in 2019 and absolutely stellar when it mattered most — in the club’s playoff run, culminating with a victory in the 107th Grey Cup.

The Bombers allowed just 39 points against in the three playoff games — limiting Calgary to 14 in the Western Semi-Final, Saskatchewan to 13 in the Western Final and Hamilton to 12 in the Grey Cup. At the same time the defence forced 14 turnovers in the playoffs, including seven in the championship game.

Hall has now been a part of four Grey Cup teams, winning three as a defensive coordinator (including 2007 and 2013 with Saskatchewan and 2019 with the Bombers). He was also a key member of the Roughriders 1989 Grey Cup Championship team.

The Bombers finished fifth in points allowed (22.7) during the regular season and second in forced turnovers (45) and interceptions (24). Two defensive players were named to the CFL All-Star Team in defensive end Willie Jefferson and cornerback Winston Rose, with Jefferson also honoured as the CFL’s Most Outstanding Defensive Player.

The Bombers made significant improvements defensively in 2018, ultimately finishing second in points allowed (20.8 per game), second in touchdowns allowed (42), second in passing touchdowns allowed (15) while finishing tied for first in turnovers forced (49) and in the turnover ratio (+13). Those numbers represented an improvement of 5.8 points allowed and 55 yards per game from the 2017 season. Over the past three years, the defence has forced 150 turnovers, more than any other CFL team.

The defensive dominance was best represented by middle linebacker Adam Bighill being named the CFL’s Most Outstanding Defensive Player, the first Bomber to be so honoured since Jovon Johnson in 2011.

In 2017, Bombers led the CFL in interceptions for the second straight season with 24 and finished second in turnovers forced with 42. The 2017 Bombers defence also finished third in quarterback pressures with 116 and fifth overall in points allowed at 27.3 points per game, while three players – safety Taylor Loffler, halfback T.J. Heath and cornerback Chris Randle – were all named to the CFL All-Star Team.

Hall’s defence led the CFL with 55 takeaways in 2016 – including 30 interceptions – 13 more than the second-best team in that category, and were second in points allowed, while Heath and Loffler were both named CFL All-Stars in their rookie seasons.

Hall’s first season as the club’s defensive boss saw three first-year defensive players excel: defensive end Jamaal Westerman finished second in the league in sacks with 17; defensive back Johnny Adams finished tied for the league lead in interceptions with six; and linebacker Khalil Bass finished with 102 tackles – the most ever by a first-year Bomber and one of only six times a Bomber defender has broken 100 tackles.

Hall saw major success with the Saskatchewan Roughriders prior to joining Winnipeg, winning the Grey Cup in 2013 while posting the league’s number-one ranked defence. The league-low 398 points allowed was the lowest total by the Riders since 2002 and second lowest total since the CFL moved to an 18-game schedule in 1986. The team led the league with 24 interceptions while allowing a league-low 36 touchdowns.

Previous to his time in Regina, Hall was the head coach of the Edmonton Eskimos for two seasons (2009, 2010), recording a 16-20 mark and making the playoffs in his first of two seasons there.

Hall was part of the Riders coaching staff for 15 seasons prior to joining Edmonton, spending eight years as defensive coordinator and developing a reputation for fielding a top defence year after year.

Before moving into his coaching role, Hall spent nine years playing in the CFL including four seasons with the Roughriders from 1988-1991. During his nine-year career, Hall saw action in 153 regular season CFL games. He was a member of the Western Division All-Star Team on four occasions; 1983 and 1986 with the Calgary Stampeders, and 1988 and 1990 in Saskatchewan. Hall was also named All-CFL for Outstanding Rookie Performance in 1983 with the Stampeders. In 1990, Roughrider fans voted Hall the Roughriders’ Most Popular Player. He was named as the club’s nominee for Outstanding Defensive Player in 1988.

Hall was born in San Antonio, Texas. He played college football at Colorado State University for the Rams and signed with the Stampeders as a free agent in 1983 following his college career.

With a continued commitment to community involvement, Hall was recognized by the CFLPA in 1990 by winning the Tom Pate award for his outstanding dedication to the CFL, the community and his performances on the field.