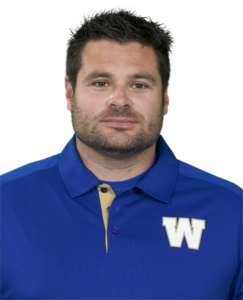 Since 2009 he has been an integral part of the franchise, overseeing the team’s communications department and playing a key role in player relations.

Cameron initially joined the Blue Bombers as Media Relations Coordinator in 2009 and was named Director of Communications & Public Relations a year later. In 2018 he was promoted to Senior Director of Public & Player Relations and has wide-ranging experience in professional sports.

From the opening of Investors Group Field in 2013 and a new logo reveal that same year, to the 103rd Grey Cup in 2015, a new uniform launch in 2016 and the team’s Grey Cup season in 2019, Cameron has spearheaded the communications strategy and implementation for the club through numerous franchise milestones.

Over the course of his 12 years in the Canadian Football League, Cameron has forged many strong working relationships with players, allowing him the unique position of assisting General Manager Kyle Walters in overseeing football operations and helping with player retention and acquisitions while balancing his role as head of the communications department.

Born and raised in Winnipeg, his knowledge of the franchise and its attachment to the community is second to none, and he strives to continue growing the Club’s outreach in Winnipeg and beyond.