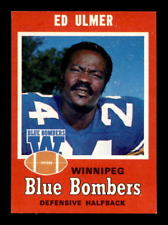 Ed Ulmer was a versatile player during his days as a Bomber, having punted, played defensive back and returned kicks during some lean years for the franchise.

Ulmer played his college ball at Ohio State and was drafted by the Dallas Cowboys before playing with the Syracuse Stormers of the United League and then coming north to the Ottawa Rough Riders in 1963. He spent two years in Ottawa before being traded to the Bombers in 1965. He spent the next seven years in Winnipeg and, upon his retirement was the team’s all-time leading punter (later surpassed by Bob Cameron) and remains in the Top 10 in career interceptions with 25.