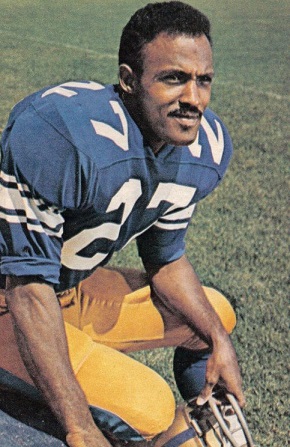 A star at the University of Michigan, Raimey was a ninth-round draft choice of the Cleveland Browns in 1963 but opted to sign with the Bombers. A shoulder injury caused him to miss the ’63 season and in ’64 he made the Browns before coming back to Canada. Raimey joined the Bombers at the end of their Glory Days, appearing in the 1965 Grey Cup ‘Wind Bowl’ loss and was a divisional all-star in each of his years in Winnipeg before being traded during the ’69 season to Toronto for quarterback Wally Gabler. Raimey’s first year as a Bomber was outstanding, as he rushed for 1,052 yards – and an 8.1-yard average – caught 20 passes and led the West Division in kickoff returns.