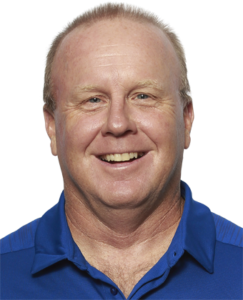 A former quarterback with the Blue Bombers and a member of the Canadian Football Hall of Fame, Danny McManus returns in 2022 for his eighth season as a member of the club’s football-operations staff in the role of Assistant General Manager, Director of U.S. Scouting.

McManus scours the United States for talent, attending countless NCAA games, NFL pre-season games and dozens of practices and workouts while working closely with GM Kyle Walters on helping shape the current roster and the team’s negotiation list of prospects.

He also facilitates the team’s free-agent camps throughout the U.S. during the offseason, along with Assistant General Manager/Director of Player Personnel Ted Goveia, and their work has been instrumental in helping find talent critical in the Blue Bombers consecutive Grey Cup championships in 2019 and 2021.

Prior to joining the Bombers, McManus worked as a scout with the Hamilton Tiger-Cats from 2009-13., serving as regional scout and then their Head U.S. Scout. He had first joined the Ticats staff in 2008 as an offensive assistant. McManus also spent the 2007 season working as an analyst for The Sports Network’s CFL broadcast team.

McManus came to Canada and Winnipeg in 1990 after a stint with the Kansas City Chiefs and a spectacular college career at Florida State that concluded with a 11-1 record and Fiesta Bowl win in 1987.

Upon his retirement after 2006, McManus was second in all-time CFL passing yards with 53,255 and was also second in pass attempts and completions. He was a member of three Grey Cup championship teams with the Bombers (1990), Lions (1994) and Ticats (1999). He was also named the MVP of Hamilton’s Grey Cup win in 1999.