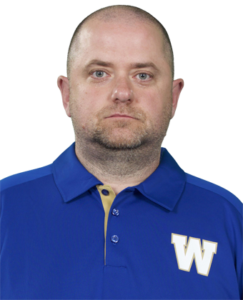 Entering his 31st season with the Winnipeg Blue Bombers in 2020, and his 22nd as the Head Equipment Manager, Brad Fotty is the man in charge of ordering, maintaining and repairing all equipment for players during practices and games.

His primary duty is the protection of the players by fitting each one with customized equipment for maximum protection. Fotty also coordinates the transportation of the team’s equipment to and from each road stadium.

Fotty’s was honoured for his years of dedicated service to the organization by being named the 2018 recipient of the Winnipeg Football Club’s Chairman’s Award.

Fotty began his career with the Blue Bombers in 1990, assisting visiting teams’ equipment staff when in Winnipeg for games. In 1993, he became the Assistant Equipment Manager, a position he held until 1997 when he took on his current post. Fotty also spent nine years as a visiting locker room attendant for the AHL’s Manitoba Moose.

Fotty is instrumental in the success of the Blue Bombers, regularly making quick decisions to not only ensure the safety of the players but to also give the Blue Bombers the best opportunity to succeed.

Fotty has only missed one game in the last 16 seasons – when his wife Sandy gave birth to their second daughter, Brooklyn, in 2009. An avid fisherman, Fotty resides in Winnipeg year-round with his wife and two children, Madison and Brooklyn, and enjoys spending his spare time with his family.