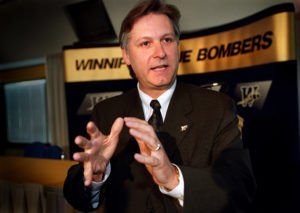 Bob Miles began his service to the Winnipeg Football Club as a board member in 1992 and later as the team’s president, with his term beginning in 1999.

Miles helped steer the franchise through some of the stormiest waters in franchise history during his tenure, which began after the Canadian Football League’s ill-fated expansion to the United States in the mid 1990s.

The Bombers were dangerously close to extinction when Miles became president, but with the help of the CFL, the two local levels of government and some incredibly tough decisions — including the down-sizing of the club’s board from 60 to 12 members — and hours upon hours of work behind the scenes the franchise was not only able to survive, but then thrive.