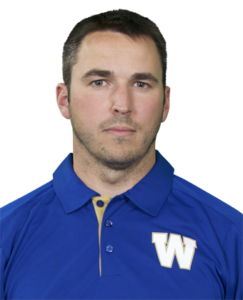 Alain Couture is entering his 18th season with the Winnipeg Football Club in 2020, overseeing the health and well-being of every player on the roster. Couture provides constant updates to the head coach on the health status of every player, and ultimately has the final say on whether they can return to the field after being injured.

Widely considered one of the best in his field by players, coaches, therapists and doctors across the Canadian Football League, Couture was honoured in October of 2019 with the Winnipeg Football Club’s Chairman’s Award for his years of service to the team.

Couture is also a Registered Massage Therapist through the Massage Therapy Association of Manitoba, and a Certified Strength and Conditioning Specialist through the National Strength and Conditioning Association. His football experience also consists of working in the NFL, as he has worked off-season training camps with the Kansas City Chiefs (2007), Minnesota Vikings (2008), and the San Francisco 49ers (2009).