“I love playing in Winnipeg.” | Jeffcoat returns for 6th season in Blue & Gold 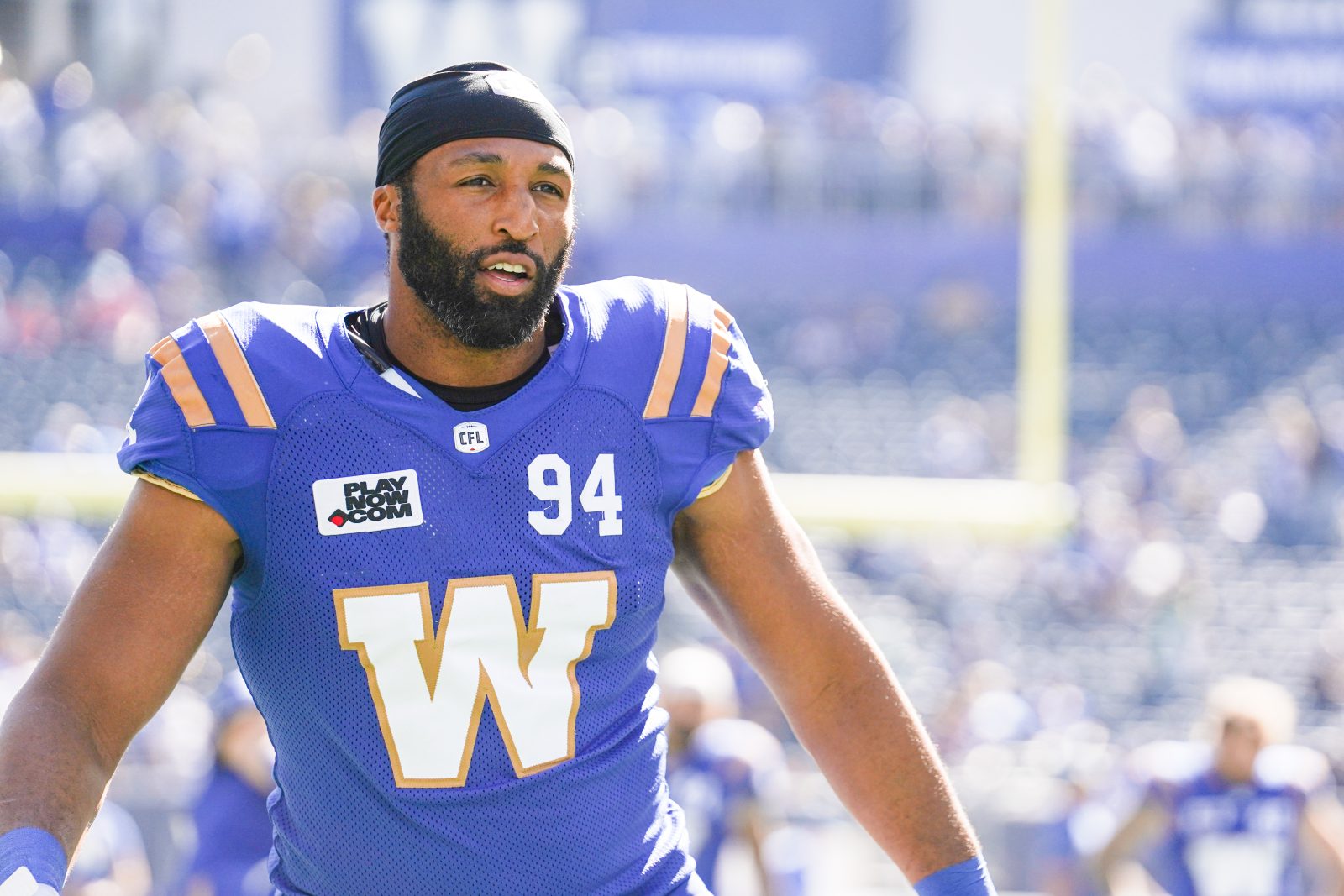 “I love playing in Winnipeg.” | Jeffcoat returns for 6th season in Blue & Gold

It’s a tale Jackson Jeffcoat has told before, but certainly needs revisiting now that he has found fame and happiness in Winnipeg with the Blue Bombers.

The veteran defensive end scribbled his name on a new contract this week to remain with the club in 2023 rather than test Canadian Football League free agency. That decision was based on many of the usual factors, from the financial to the comfort that comes from familiarity.

Big picture, he also put pen to paper simply because he is happy with where he’s at now both personally and professionally. And that wasn’t always the case. You see, when he first arrived in Winnipeg in 2017 he was hell-bent on doing everything possible to get back to the National Football League.

“It took a lot of prayer and time to realize not everything happens the way you want it to happen,” Jeffcoat said in a chat with bluebombers.com this morning. “I’m happy. I’m happy to come back and play for Winnipeg. I could have made more money going to other teams, being 100 percent honest. But I like what I have in Winnipeg. Am I going to let them short-change me? No, because I know my worth. Our negotiations worked out and that’s important for me.

“I love playing in Winnipeg. I love the community. I love the team. I love (Mike) O’Shea. I love (defensive line coach) Darrell Patterson, (defensive coordinator) Richie Hall and all the coaches. It’s been a great time for me, and I’ve grown a lot as a person over time from the first time I got there. I think I’m better as a person for being able to play in the CFL.” 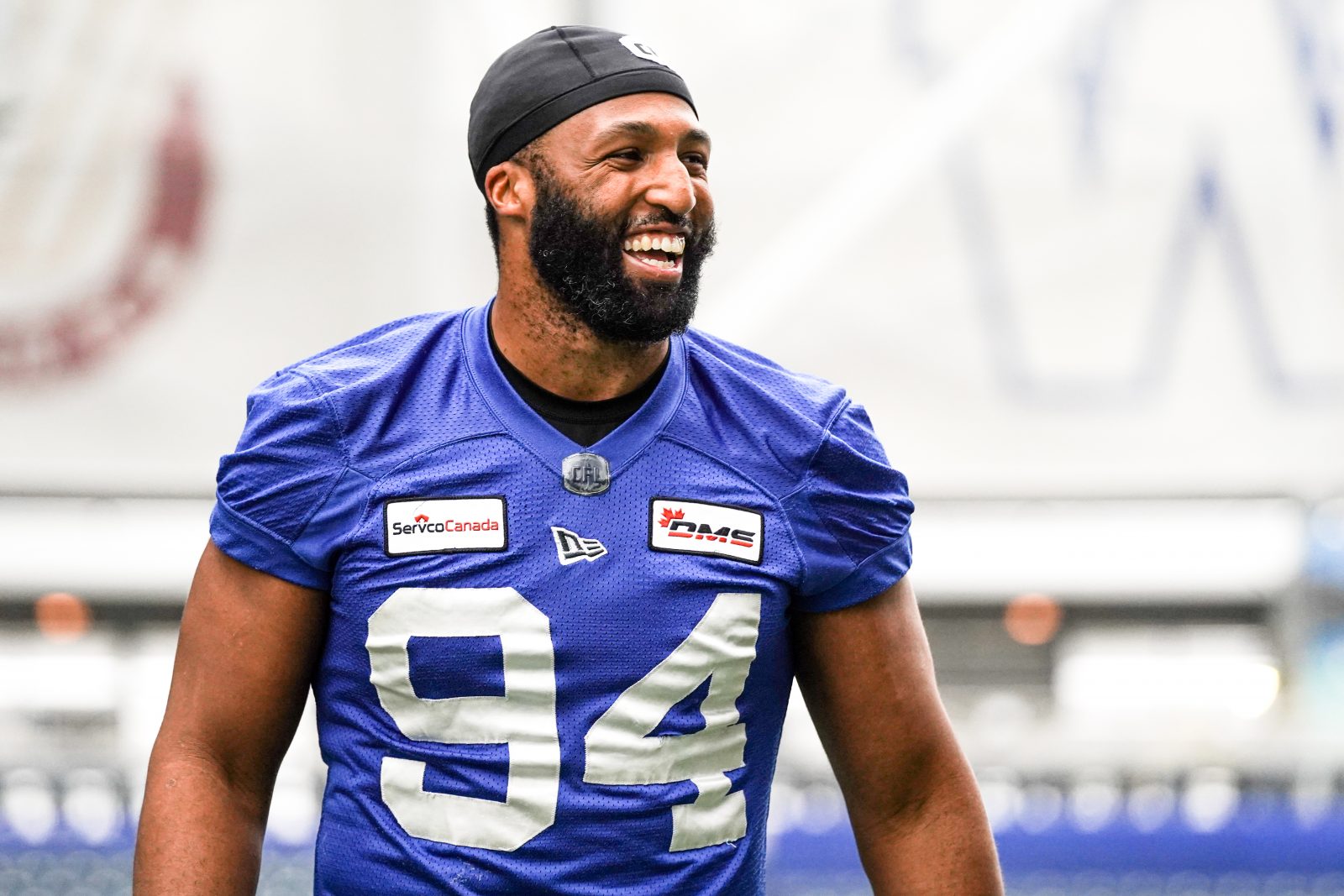 That last line is a big, wide-ranging statement, but it’s also a peek into how Jeffcoat’s mind works. The 32-year-old Texan may not be the flamboyant personality of his defensive end compadre Willie Jefferson, but he’s an inquisitive sort always on the hunt for answers – both about the things that surround him and in his own personal journey.

“Why do I think I’m a better person for playing in the CFL?” said Jeffcoat, repeating a follow-up question. “You know how it is when people get a lot of money like players in the NFL do. Then they get a lot of others latching on and it becomes a case where they don’t know who their real friends are. I don’t have that problem. I know who my friends are. I know the people who are going to be around me and with me no matter if I make another dollar or if I’m at the top. They could care less about my status and they care more about me as a person.

“Plus, I’ve gone through adversity in the CFL. Yes, we’ve been to the top. Sometimes people say when you win you don’t learn as much, and I could agree with that to some extent. But I’ve learned a lot about myself through winning and losing because of the people around me.

“It’s helped me learn about the type of people I want around me in my life. Football is not going to last me a lifetime – I’m way closer to being done than when I began, and I’ve learned so many lessons and you learn so many with each year in this wonderful sport.”

Jeffcoat took our call from his offseason base in Austin, TX while in a continuing education course as part of a legal update in the renewal of his real estate license. At the same time, he’s been continuing to study his own workout regimen through the help of the Blue Bombers therapy staff and others in an attempt to come up with answers to have his body best prepared to handle the rigours of the long CFL season.

Jeffcoat missed six games in 2022 while still racking up four sacks, a total which gives him 30 in his career as a Blue Bomber and ranks him 11th on the club’s all-time list (Tyrone Jones is first at 98; Paul Randolph is 10th at 32).

In 2021 – his best season statistically – he played in 12 of the 14 regular season games, had nine sacks and four forced fumbles en route to being named a CFL All-Star. Critical for him, then, is to stay on the field. 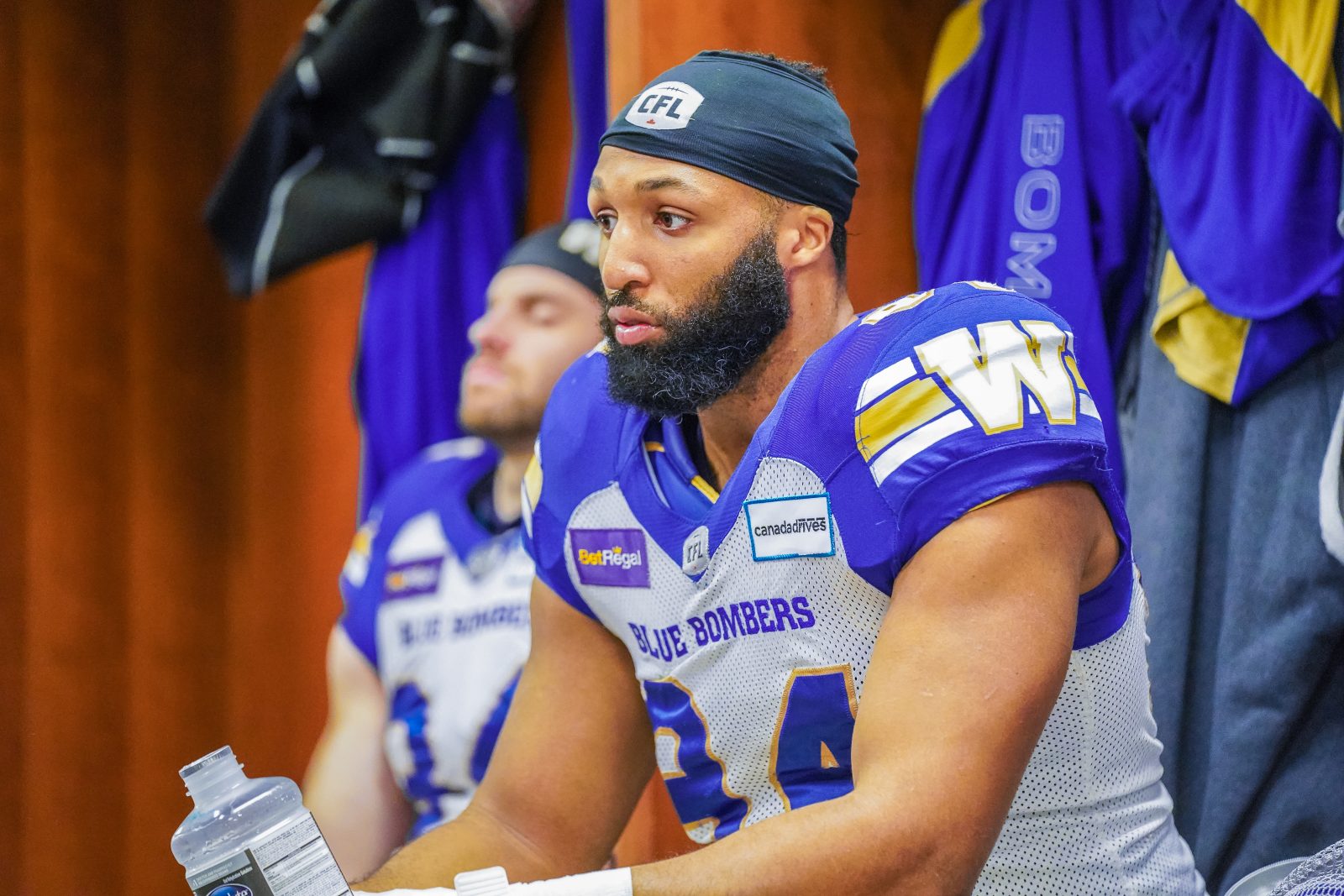 “That’s just how my mind works,” he said. “Knowing the injuries I’ve had, there are things I’ve learned and studied that could possibly make things better and have less chance of injury.

“There’s a lot of unfinished business right now – not just unfinished business as a team, but for me as well. I think I need to put together a fully healthy season. Battling the injury bug last season – probably the most that I’ve had – was frustrating. I know there’s more for me to put out there as a player. It’s for myself, too, to know I can put it all out there and put another good season together.”

Jeffcoat’s playoff run was a snapshot of his 2022 season. He had a sack in the Western Final and was arguably the best player on the field in the early part of the 109th Grey Cup – registering a sack and a forced fumble – before he suffered an injury.

“Somebody said that to me after the Grey Cup – that the game was symbolic of my season – and it was frustrating at the time because I didn’t want to hear it from someone else,” said Jeffcoat. “I had played well at times but didn’t get to stay on the field the whole time and for me that was frustrating. But as a pro it’s my responsibility and that’s what I’m doing this offseason – doing everything I can to make sure I stay on the field.

“A lot of that is out of your control, but I feel like I have to do a better job of controlling what I can control and not allowing myself to get in those positions.”

He’s also driven by his competitive nature and by the legacy established by his father, Jim Jeffcoat – the two-time Super Bowl champion during his days with the Dallas Cowboys, who carved out a 15-year career that included time with the Buffalo Bills. Jim Jeffcoat, FYI, is also a member of the NFL’s 100-sack club. 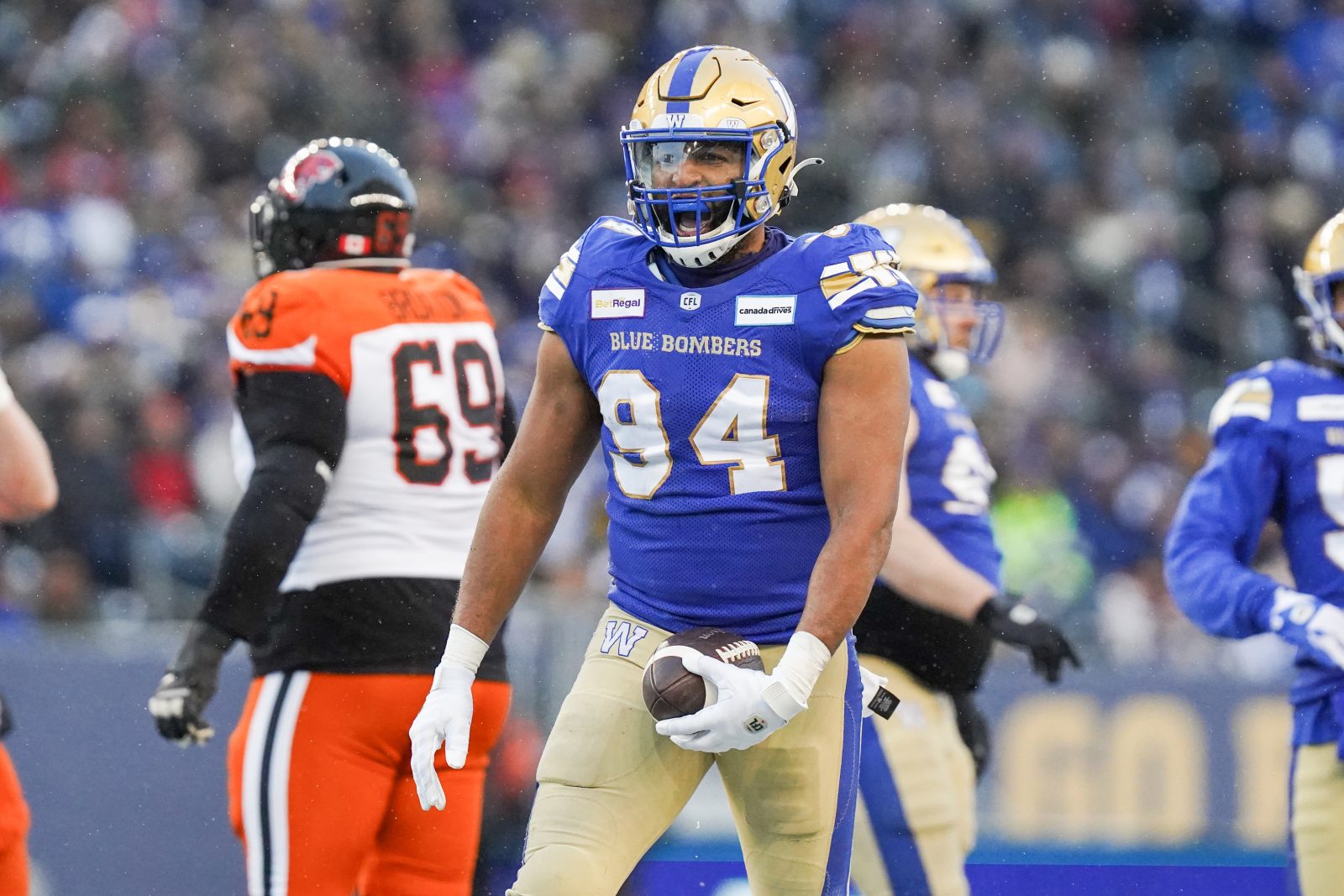 “I’m so competitive,” said Jeffcoat with a chuckle. “A big thing for me is my dad won back-to-back Super Bowls (1992, 1993) and so winning three (Grey Cups) would have put me ahead of him. But I also think about how his team won back-to-back Super Bowls and then lost in the NFC championship to San Francisco in his third year – so they had the opportunity to go to the Super Bowl that year and were good enough to win it. Then the next year my dad goes to Buffalo and the Cowboys win the Super Bowl. He missed out, basically, on two Super Bowls.

“He has said he wants people to say, ‘that’s Jackson Jeffcoat’s dad’, not ‘that’s Jim Jeffcoat’s son.’ That’s what he says people say to him a lot more now.”

This brings us back to the top, and the growth Jeffcoat has shown and the contentment he has found in walking his own path in Winnipeg and across the CFL. It’s hardly been a straight line, but he’s also learned so much about himself in not having a straight line to success.

“Plus, you know how much the ’Dark Side’ enjoys playing with each other.”