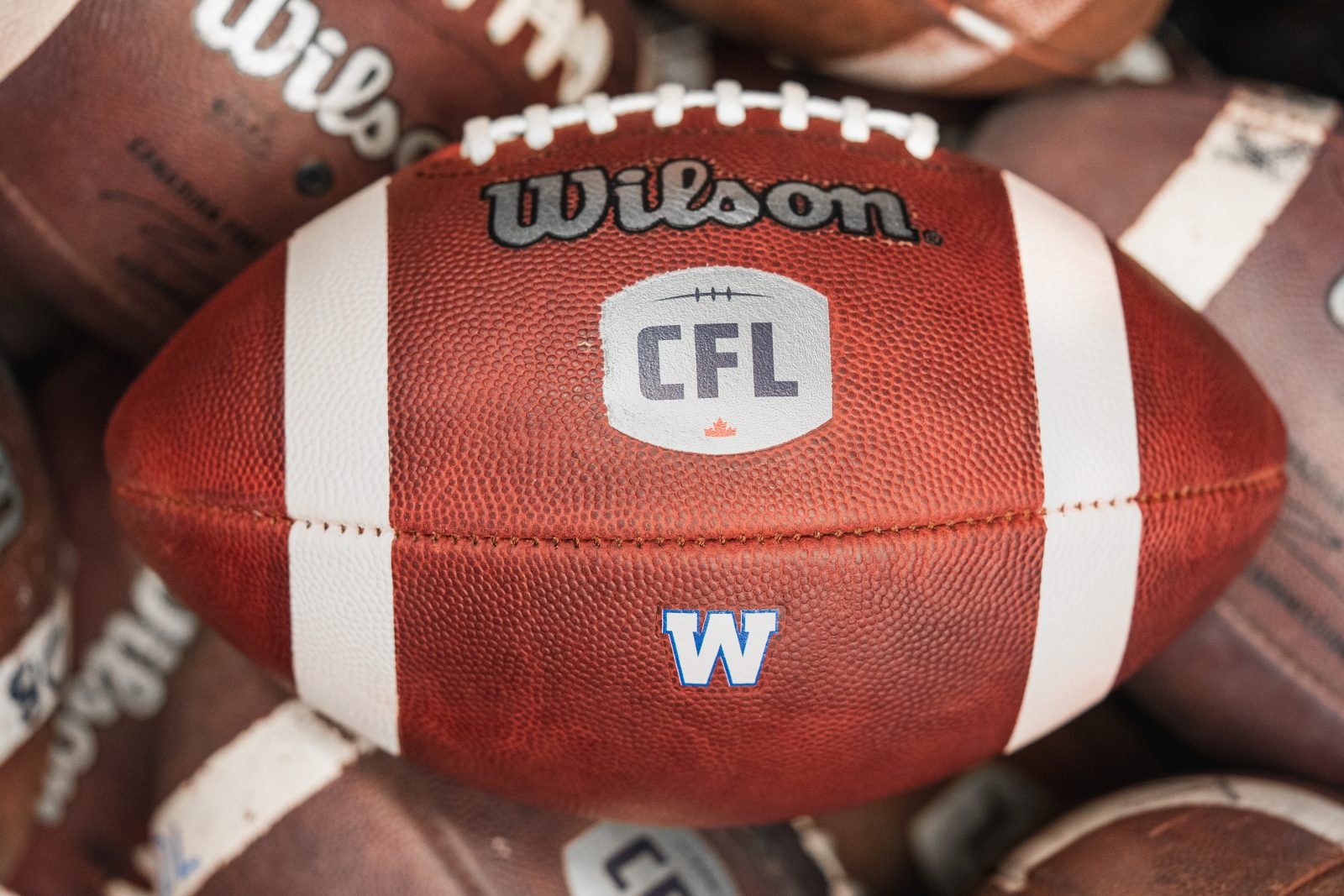 It’s a narrative which was first spawned not long after the clock ticked down in the 109th Grey Cup and as the Winnipeg Blue Bombers watched their shot at three consecutive championships slip away.

There was an instant sting with that and, as head coach Mike O’Shea said a week or so after the loss to the Toronto Argonauts, a setback like that can leave a permanent scar. That message has been repeated from players before they headed home for the offseason, and then from those who have since signed contract extensions.

So, a topic for discussion: how long should the Blue Bombers wallow in their own misery before turning the page on what happened at Mosaic Stadium last November 20th?

Using that defeat as fuel could be a powerful motivator, no doubt. But carrying it into 2023 might also be counterproductive and, perhaps, even unhealthy mentally.

How each returning player and coach handles the sting of the loss and presses on will make the Blue Bombers a fascinating case study until late this November. 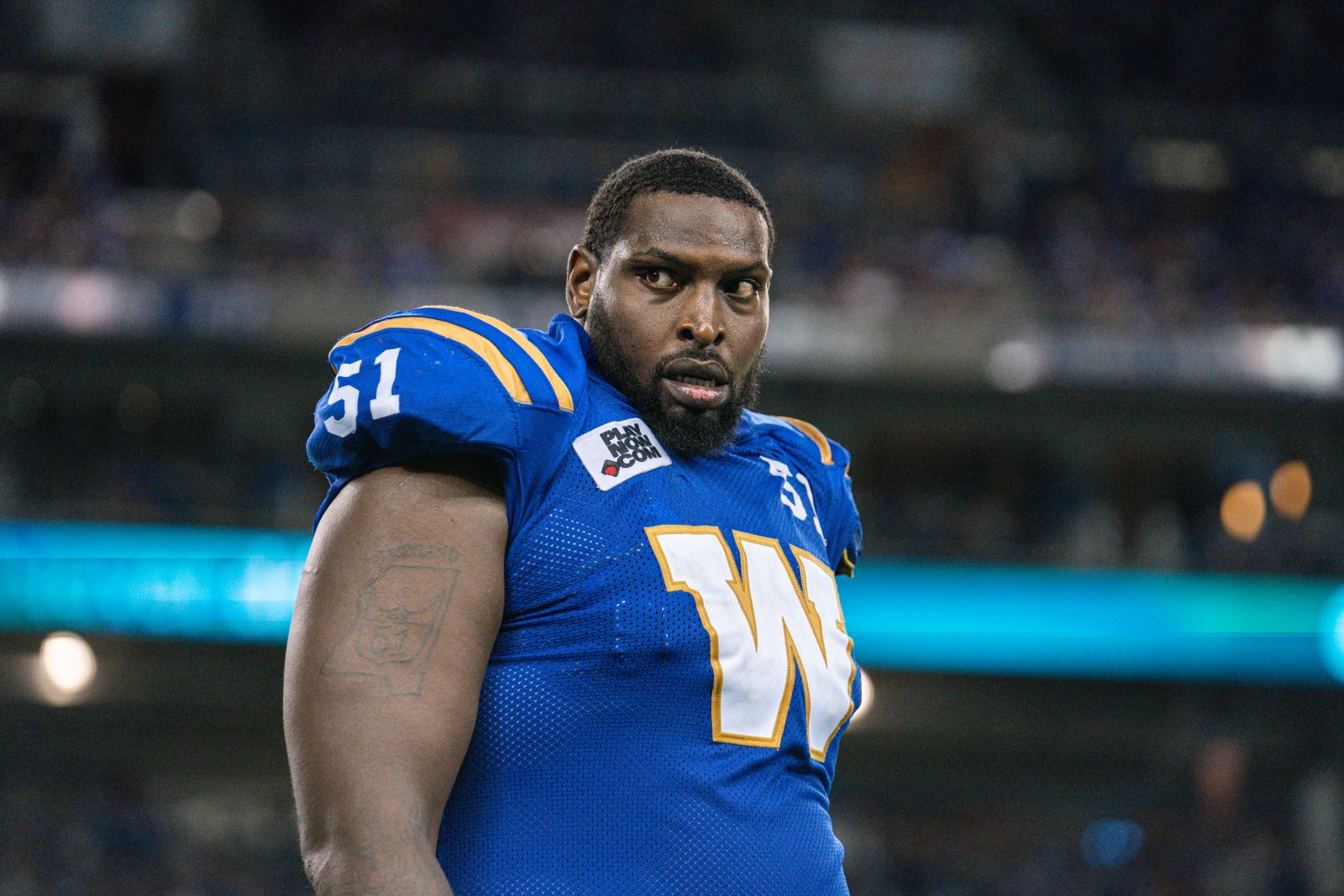 “I never stopped thinking about it, but I have moved on,” said Jermarcus Hardrick, fresh from signing a one-year extension, earlier this week in a chat with bluebombers.com. “I didn’t want to rush it and I wanted to move on at my own pace.

“This wasn’t the first time I lost a championship. I did back in middle school and high school, I lost a national junior college championship – we lost to Cam Newton in that game – and lost a Big 12 championship with Nebraska.

“It hit so hard because I know how hard we worked. I know we did everything extra. So, you just have to give credit to Toronto.”

Now, it’s all but a given that in this very moment there is a Blue Bomber player and/or coach somewhere still cursing that loss, or a moment in it that went sideways.

As Stanley Bryant said earlier this month, “I have plays that, in my mind, I would want back.

“It hurt because there were a lot of guys first time there. I love seeing young guys or guys who have been in the league get to the Grey Cup and also win it. I had a chance to win three and so that hurt the most, not being able embrace the win and see them enjoy themselves. I mean, it was heartbreaking. I wish it would have been the other way around, but it wasn’t.

“So, we’ve just to come in next year and try to do the same thing and get there and change the result.”

Getting there – to a point of acceptance — won’t be as simple for some others. And there’s no timetable or simple formula for reaching that point, either.

“The first week after the Grey Cup, that was probably the worst I’ve been in a long time. I just couldn’t accept it and I didn’t know how to accept it,” said Hardrick. “It’s going to be different for each guy.

“It took time for me. I’d see something on social media, and I’d see a Toronto post, or a Grey Cup post and I’d exit out as if it didn’t happen. It was when I reached out to Andrew (Harris) to congratulate him that my healing process started.

“Then when I came back home and was around my family and got back into my routine that process really clicked in for me.” 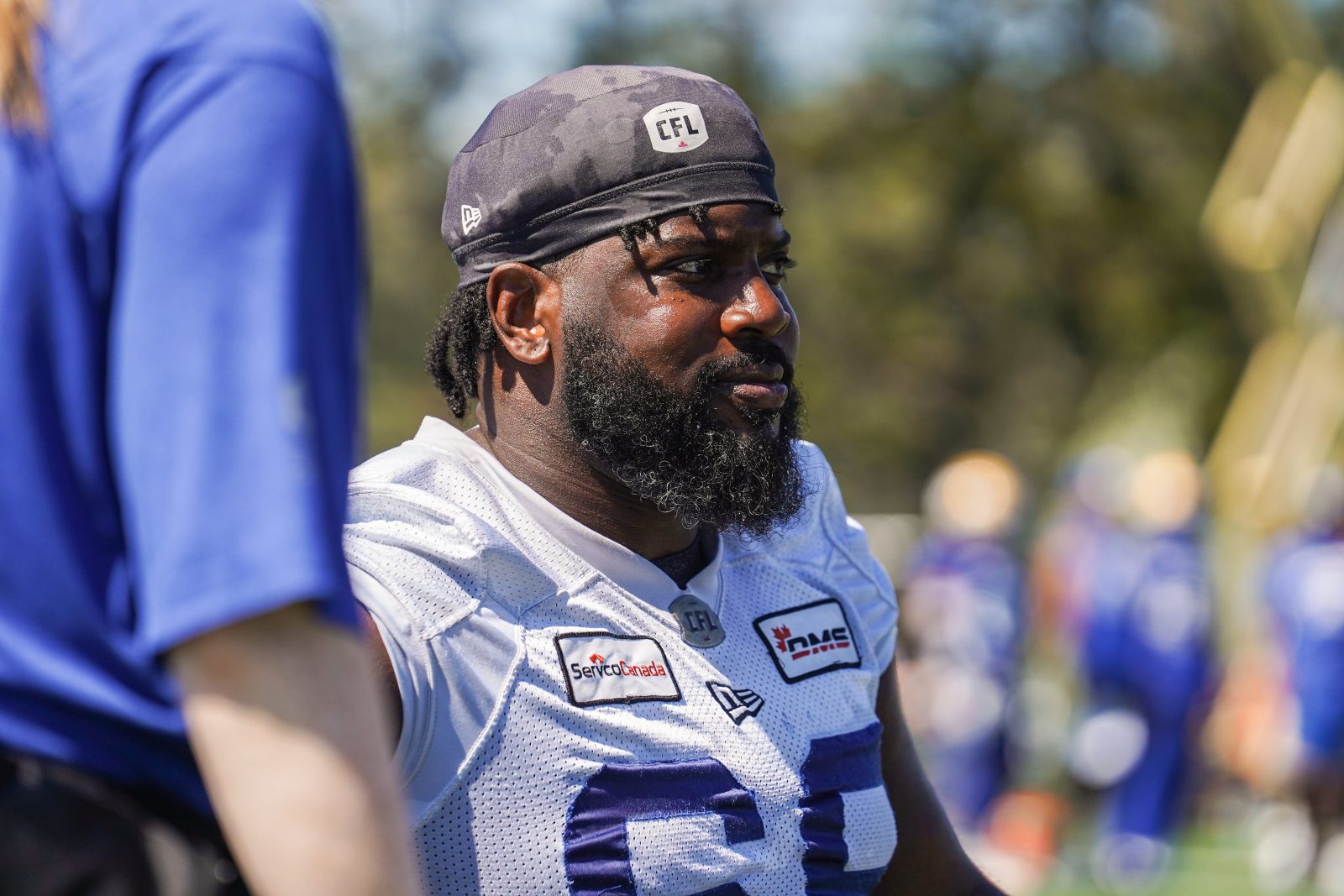 The Blue Bombers have been through this before in this millennium, of course, losing Grey Cup games in 2001, in 2007 and 2011 before the first of back-to-back titles in 2019 ended a long championship drought.

Worth noting: the 2002 Blue Bombes lost in the West Final; the ’08 squad fell in the East Semi-Final while the ’12 team missed the playoffs with a 6-12 record.

We know what you’re thinking: why the hell did you bring that up?

“I don’t want to put a label or anything on it,” said Bryant when asked last week if this would be a ‘redemption’ year. “I think a lot of guys are going to come in and know what the end goal is, which is the end goal each and every year. So, I think guys will come in refocused, locked in, and know we have the team and the talent to get to the Grey Cup. But we just have to do the small things better to come out on top. That’s all.”

The final word on this – for now, at least – comes from Hardrick.

“You know what? You can’t let that game beat you twice,” he said. “We already lost it. When we get to training camp it has to be all about 2023. I don’t want to start talking about ‘revenge’ or any nonsense like that.

“We’ll just come in, play the Mike O’Shea way, and work hard every day. That’s it. It can be simple when you approach it that way.” 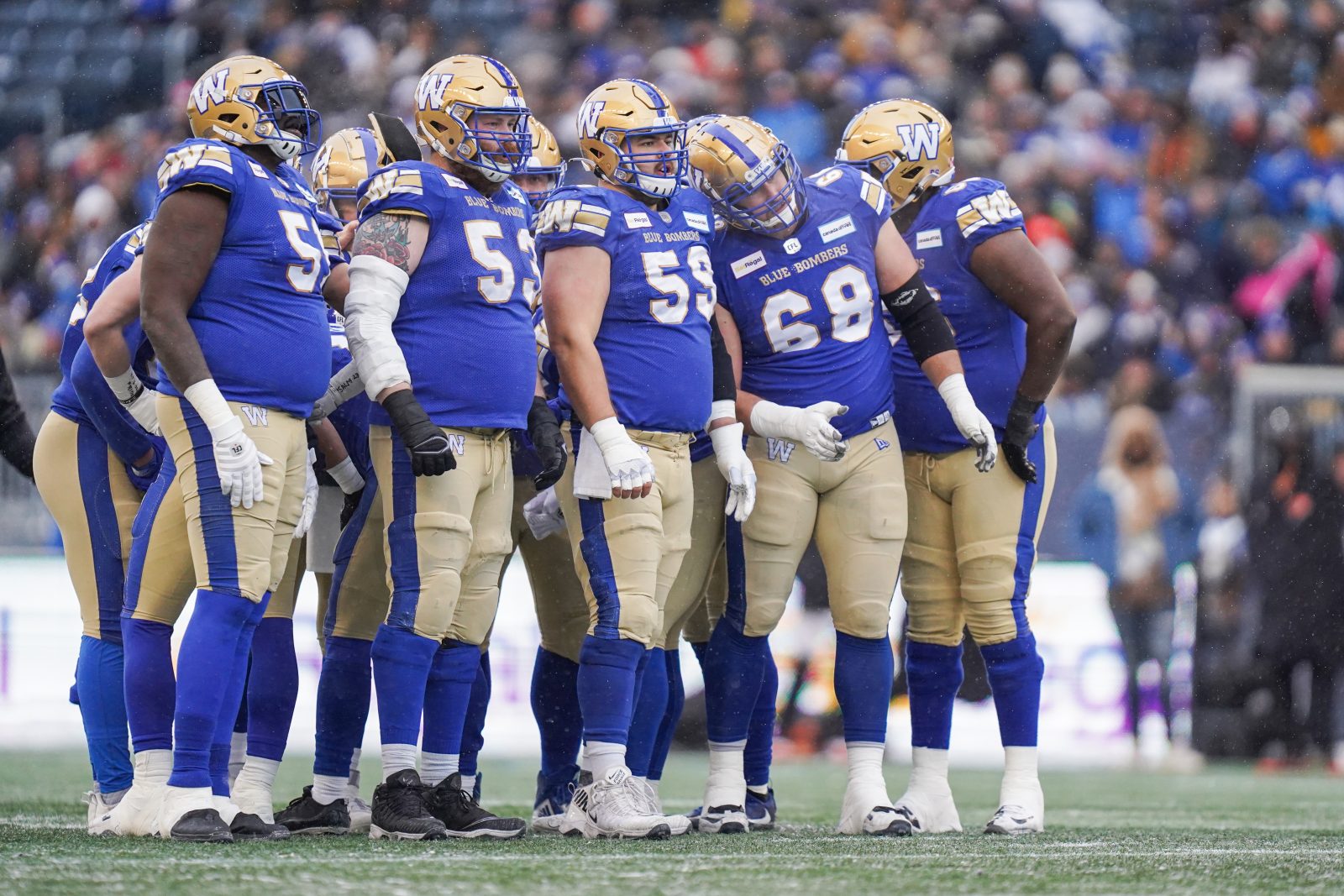 1. One more from Hardrick on the continuity of the Blue Bombers O-line and how that been key to so much of the club’s success since his arrival in 2016:

“It means a lot to our success. I think we’re a big factor in helping the team go. We try to be leaders. We try to be the big, physical guys and with all of us playing together for so long we know how to play, we know how we want to play. We’ve just got to keep raising the bar.

“I’m excited. I’ve been talking to the guys. I talk to Stanley and Paddy (Neufeld) all the time and we’re always talking about getting better, what’s going on in our heads and I love that about it the most because all we want to do is get better.”

2. Word is there are more free-agent signings in the hopper for the Blue Bombers, but as it currently stands the club still has 16 pending free agents. Here’s the updated list with the free agent market opening on February 14th:

As much as the Blue Bombers want to return as many players as possible to a team that went 15-3 and lost in the championship, it’s just not possible – as GM Kyle Walters said earlier this week from the CFL’s winter meetings in Kananaskis.

The Blue Bombers are clearly nailing their top picks in the CFL Draft, as evidenced by NFL teams continuing to whisk some of them them away.

4. And one more on this… I asked Walters if losing Ford, Kongbo and Desjarlais might impact the team’s draft strategy. (Ford, FYI, remains Blue Bombers property through 2024 should he get released).

“You’ve still just got take the best guy available,” Walters said. “If they’re not a priority guy (signed by NFL teams as free agents right after the NFL Draft) and we think they’re going to be in our camp that’s important. After that, it’s out of our control.

“You can’t have a crystal ball to the point that you say, ‘Well, Tyrell is going to progress so nicely he’s going to sign with the Green Bay Packers so we’re not going to draft him.’ That’s not a logical way to approach things, so we’ll just keep doing what we’re doing.

“We’re looking at three high draft picks you’d like to think stay in the building and grow and develop that are no longer with us. You’ve got to look at it like it’s an opportunity for somebody else.”

5. The departure of Ford may not impact how the Blue Bombers approach the 2023 CFL Draft, but it will undoubtedly have them looking more at defensive backfield prospects.

The club looked solid there in terms of Canadian talent with Ford an emerging talent and with the Hallett brothers – Nick and Noah – able to line up at safety. Both Redha Kramdi and Cedrick Lavigne could also be possibilities but are more suited to the dime and linebacker spots.

“It doesn’t affect how we approach the draft, but now you look at our roster and we had Tyrell Ford in there as a Canadian corner,” said Walters, “but now he’s not there and that means our roster is potentially different than what we start it was with the Canadians.

“We’ll look at all areas in our prep for the draft.” 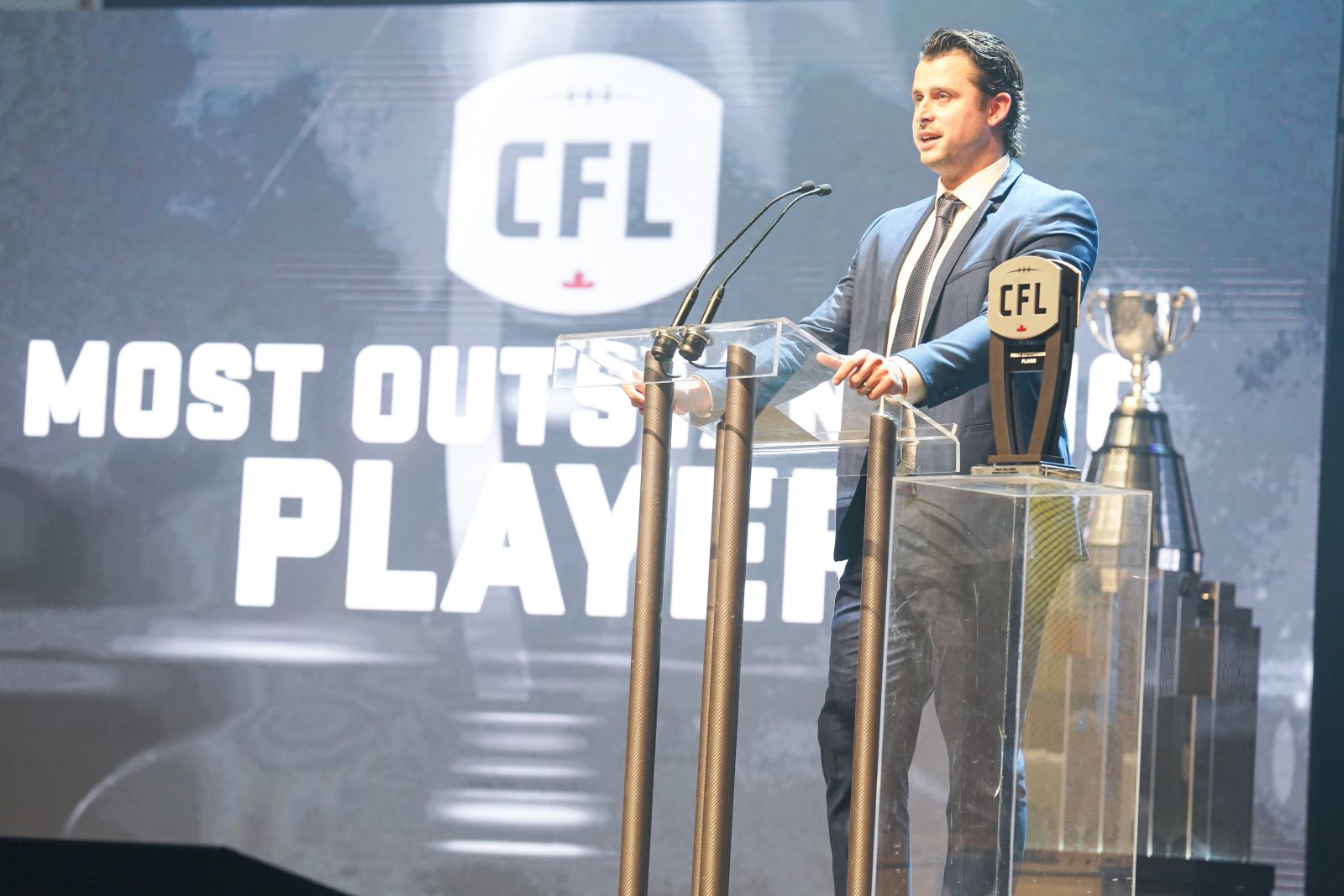 6. We keep coming back to this because it’s becoming a bigger issue as CFL free agency approaches – can’t overstate how big it was last October 17th when the Blue Bombers announced that Zach Collaros had signed a three-year contract extension through 2025.

Take a peek at the current QB landscape across the CFL:

• B.C.’s star Nathan Rourke is certain to sign in the NFL, but the Lions do have Vernon Adams, Jr. ready to step in again.

• Calgary has already moved on from Bo Levi Mitchell with Jake Maier.

• Saskatchewan’s Cody Fajardo was benched at the end of the year and is a free agent, although the Riders have left the door open to circling back to him.

• Hamilton traded for Mitchell, also a pending free agent, hoping to sign him before the market opens while Dane Evans, under contract through this year, wonders about his future there.

• There are rumblings Toronto’s veteran McLeod Bethel-Thompson may retire, although the Argos are bullish on Chad Kelly, who came off the bench to rally the squad in their Grey Cup win.

• Ottawa return’s Jeremiah Masoli, who played in only four games last year because of injury with Nick Arbuckle and Caleb Evans both pending free agents.

• Montreal starter Trevor Harris is a pending free agent and while the Alouettes reportedly want him back, he has already been linked to Saskatchewan.

That’s a ton of uncertainty at the game’s most-important position.

Rasheed Bailey’s ‘Superman’ dive for a TD was voted the winner via a fan vote:

Voted by you the (best) fans, Rasheed Bailey’s superman act is your 2022 Play of the Year. #ForTheW pic.twitter.com/YOHM4MUhVb

That play was also wonderfully captured by our ace photographer, Rob Reyes Ong: 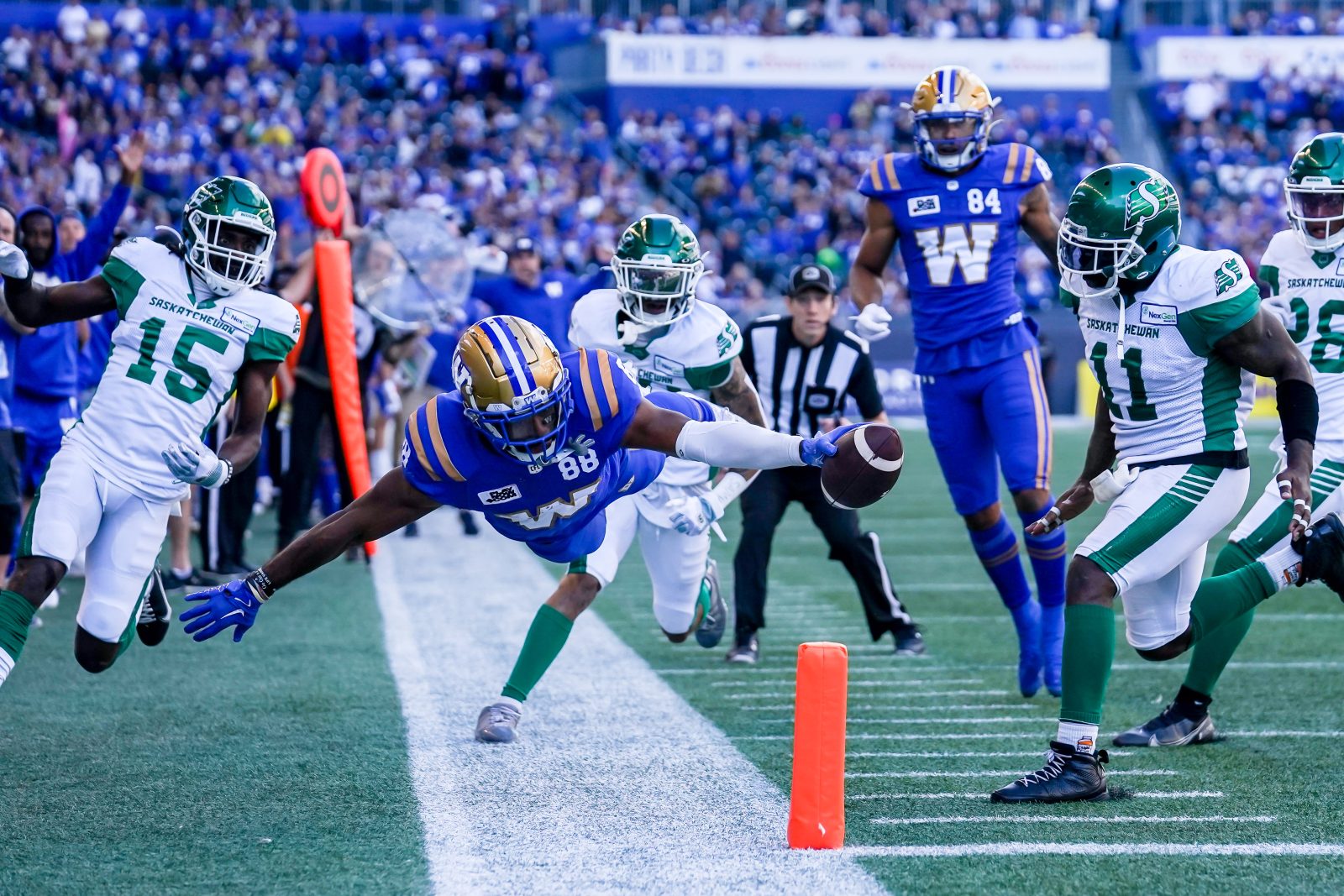 8. Just because the man remains so popular in these parts, an update on QB Chris Streveler for those who may have missed it – the veteran pivot was signed to a reserve/futures contract to return with the New York Jets.

Clearly, he has made an impression on the Jets and their fan base, just as he did in Winnipeg.

Machino will now play with Team Japan in the Japan-U.S. Dream Bowl, a game pitting the Japanese All-Star Team with an Ivy League team made up of players from the conference’s eight schools to be held in Toyko on January 22nd.

Maruo was invited to play in that game, too, but opted to step away to give his body a rest after a long stretch in the CFL and then the X-League.

After 22 games and 2 championships, my 2022-2023 season has officially ended.. My mind, heart, body, and spirit was not ready for the Japan national team.. I need a break from football right now and rest up. Thank you God for getting me through this crazy long season injury free!

10. And, finally, congrats to former Blue Bombers QB Michael Bishop, who was inducted this week into the College Football Hall of Fame as part of a 2023 induction class that includes 18 players and four coaches.

During his days at Kansas State (1997-98) Bishop led the Wildcats to a 22-3 record, including a Fiesta Bowl win in 1997 and a berth in the Big 12 championship in 1998. He set 26 single-game, season and career records in his two years at K-State and, after being drafted by the Green Bay Packers in 1999, eventually found his way to the CFL with Toronto in 2002 before joining the Blue Bombers in 2009 after the club started the season with Stefan LeFors at QB. The club went 5-8 under Bishop the rest of that year and missed the playoffs.