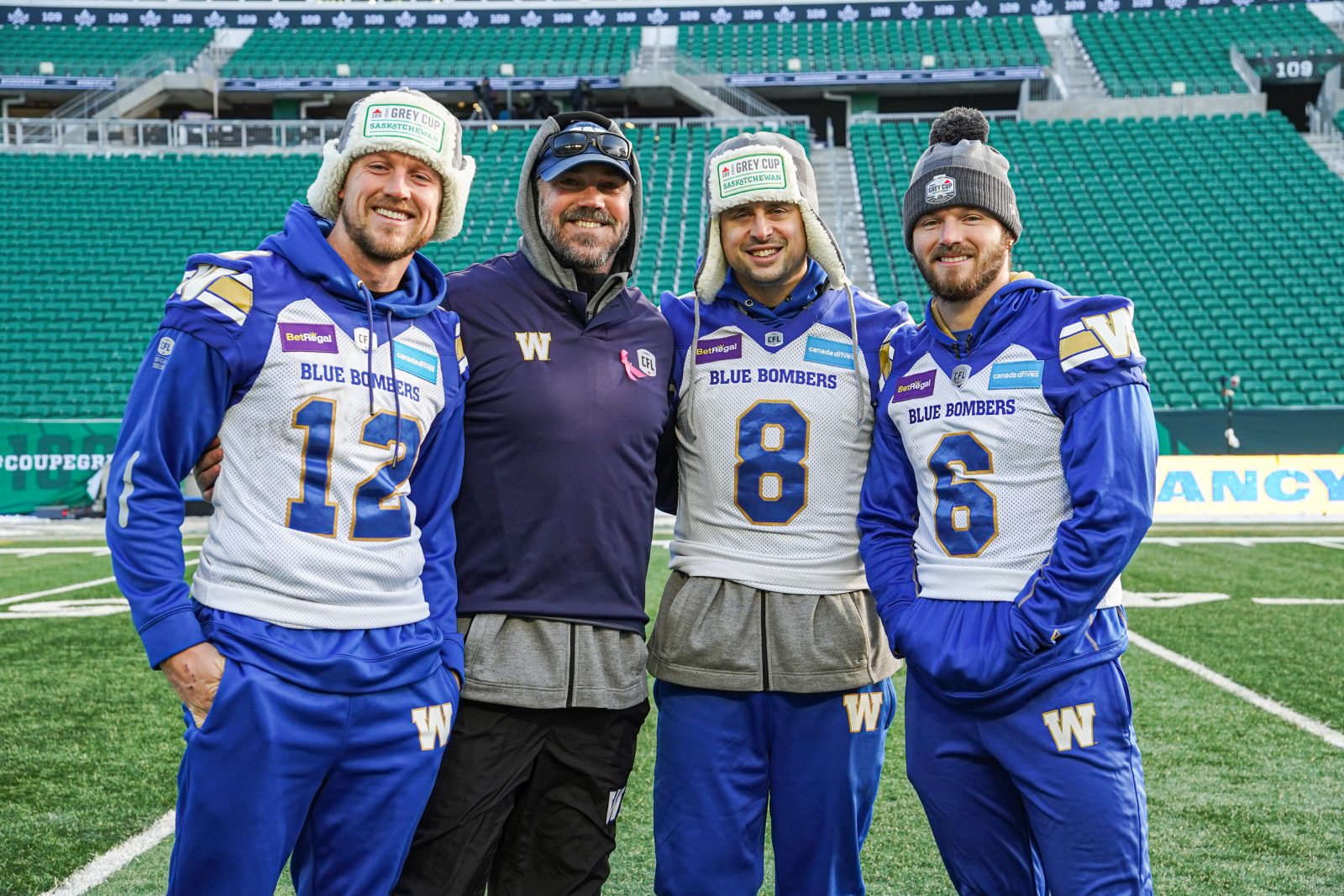 REGINA – Zoom out for a wide angle view and there is such a glorious opportunity for the Winnipeg Blue Bombers to make so much history in Sunday’s 109th Grey Cup.

A victory over the Toronto Argonauts would not only be the club’s third consecutive Grey Cup, it would further cement a growing legacy and add a chapter to what has already been an epic run.

Yet – and this will hardly shock anyone who has followed this team over the last few years – no one, absolutely no one, was willing to engage in any sort of big-picture narrative all throughout Grey Cup week. So, naturally, a question: why not?

“Why not? Because if you look back, you get hit in the mouth,” explained Blue Bombers defensive end Jackson Jeffcoat. “Everything else is in the past. You don’t win on Sunday because you did something else in the past and so we’ve got to handle what’s right in front of us.

“You have to blind yourself to everything else. After the game, hopefully we can look back and be excited about winning three. Right now, we’re chasing one as a group. A lot of these guys haven’t won one yet and we have to make sure we take care of this group.”

That idea of honouring teammates is as big a foundational block with this group as the mantra of ‘going 1-0 each week.’ The Blue Bombers Grey Cup roster, as much as it is stacked with familiar faces, also features 13 players new to the team this year.

And so, while so many are chasing a third ring, ensuring that that baker’s dozen gets a first is paramount. 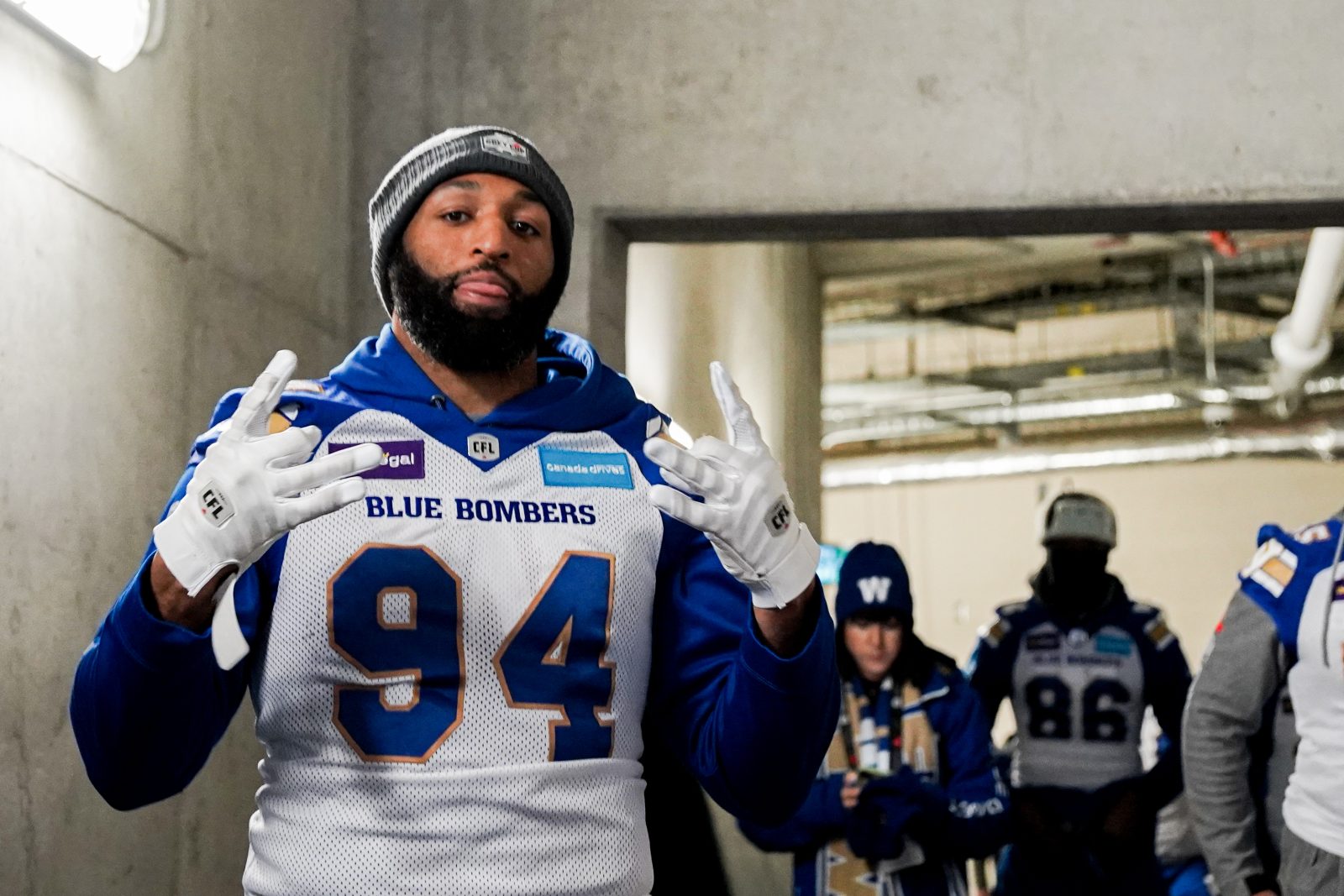 “This roster, from top to bottom, there’s a bunch of guys who have heard ‘no’ at one point in their careers and that goes from the quarterback to the snapper,” explained receiver Rasheed Bailey. “That fuels us, but it also gives us an understanding of the struggle and of the reward. And we want to make sure everyone gets rewarded.

“There’s something about living in the moment. I’m not going to say what you’ve done in the past doesn’t really matter, but at this point in time it really doesn’t. Think about it: people only care about what you’re doing right now. Once you’ve done something it’s done, and you can’t harp on it for too long.

“Coach O’Shea does a really good job of bringing that home. That’s why he preaches going 1-0 each week. It instills a mentality in us. If you’re thinking about the end result or something down the line you’re not living in the moment.

“Here’s how I look at it,” Bailey added. “If a three-peat happens, it happens. But right now, it’s about the moment. And I can’t wait to go out there and just try to be 1-0.” 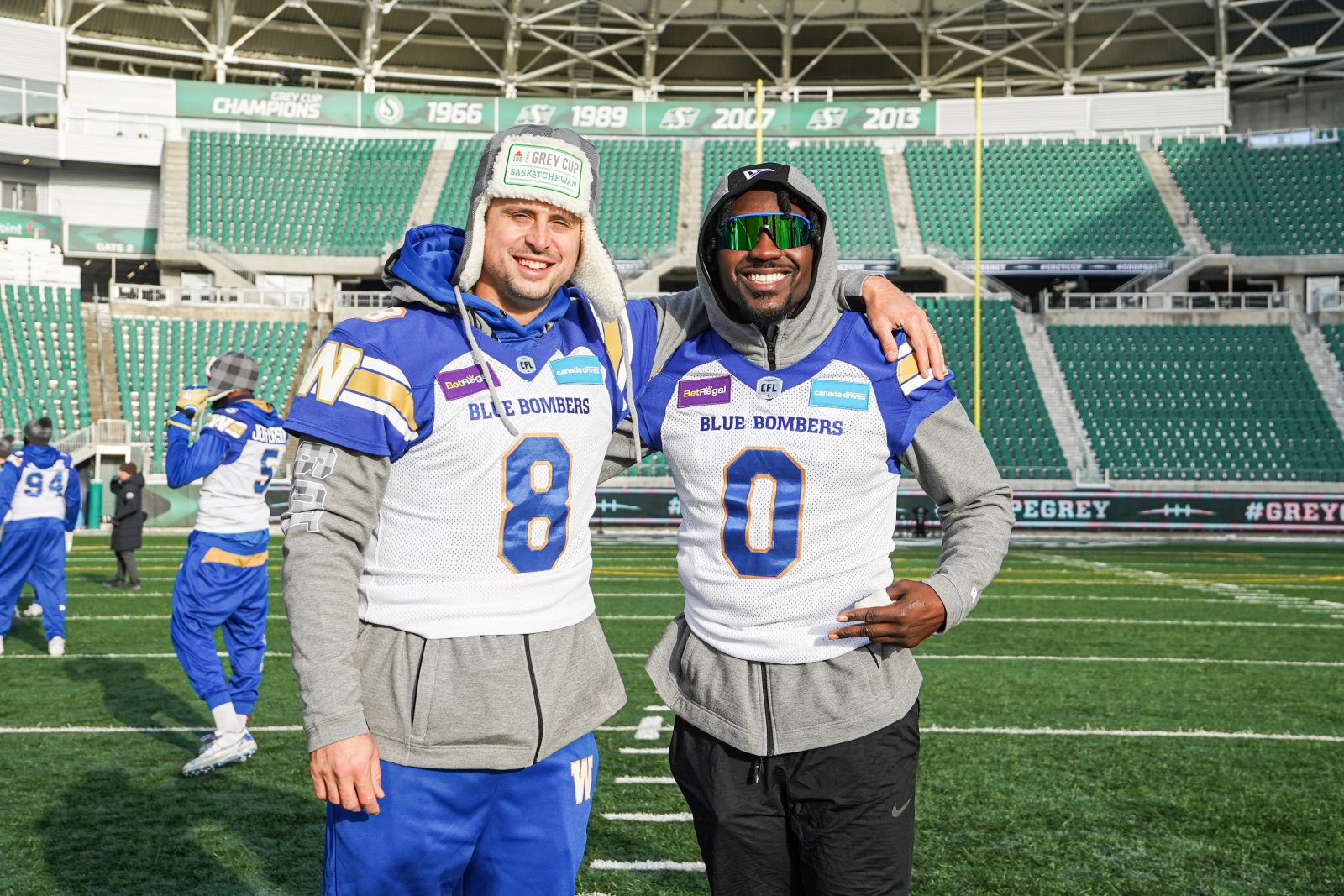 The Winnipeg Football Club took its first breath in 1930 and to be speaking of possible firsts over a history so deep-rooted is significant.

No Blue Bombers team has won three consecutive Grey Cups and so this current crew has a shot at accomplishing something that some of the legends from the Glory Days of the late 1950s/early 60s – Ken Ploen, Leo Lewis, Gerry James, Bud Grant et al – did not.

And given this franchise’s bright history, that’s saying a ton.

“There are a lot of factors that have made this team special,” said Jeffcoat. “One, we really care for each other and communicate well with each other. Two, we all love to play ball and we’re all trying to make each other better. Three, we just get each other. We understand each other more than any other team I’ve ever been on. That’s special. The coaches have taken the time to understand us as players and we understand the coaching staff, what they want and what they demand from us.

“A lot of the older guys on this team have almost become secondary coaches in that regard, making sure the standard is set and met. It starts at the top with this team, but everyone else can be a captain or a leader in their own way. We’re all working to keep FIFO going – Fit In or Forfeit Opportunity. That’s the most important thing for us because it works.” 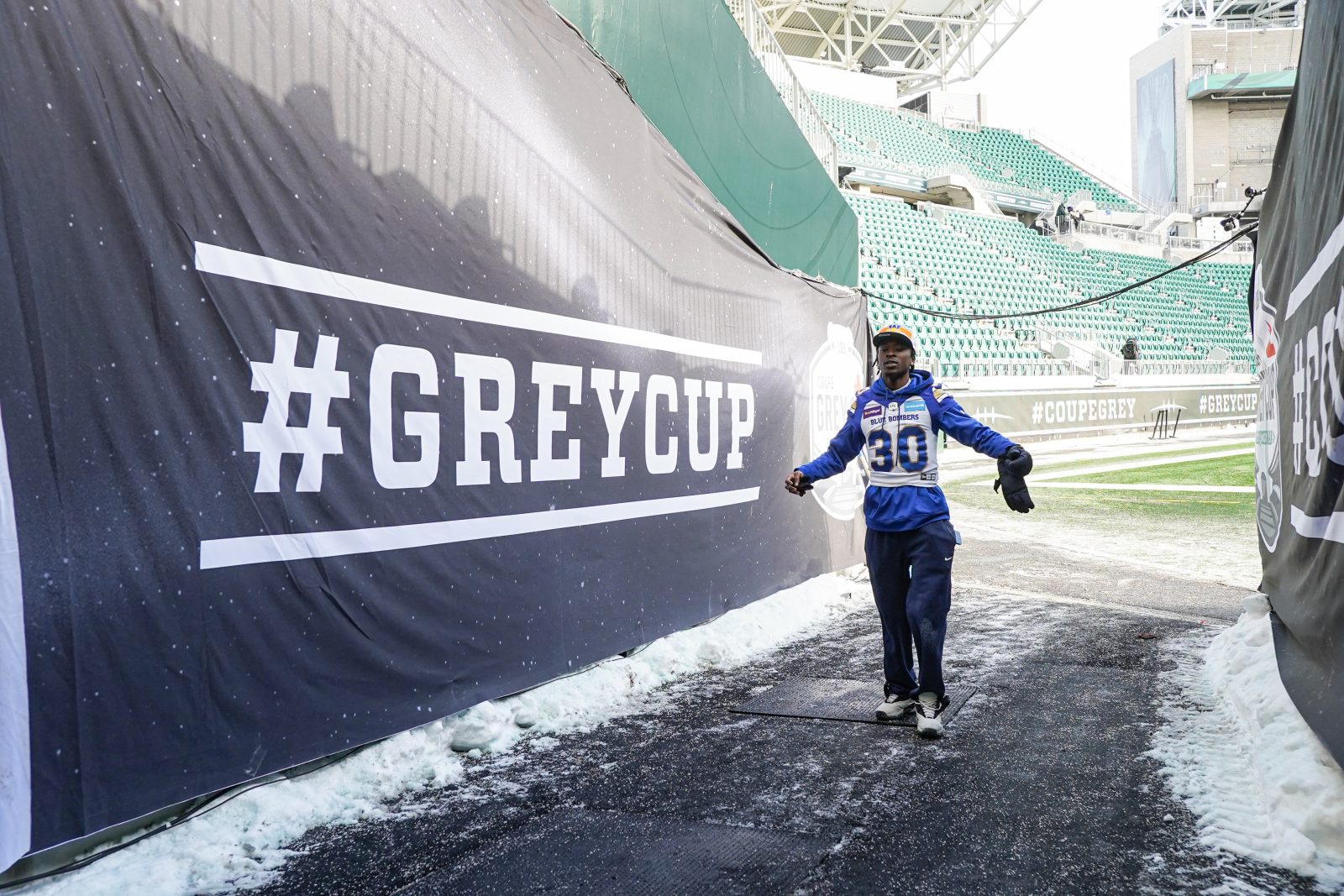 Zach Collaros was on the field participating for a second straight day after missing Wednesday and Thursday as the club opted to get him treatment on the ankle he twisted in last Sunday’s Western Final win.

That’s obviously a massive development for the two-time CFL Most Outstanding Player, All-Star QB and a man with a 33-4 record and unbeaten in six playoff games since the trade that brought him to Winnipeg. The Blue Bombers have the utmost confidence in Dru Brown and Dakota Prukop, but their resumés aren’t overflowing with the accolades of QB1.

“After the initial two-three minutes of it (right after the injury) I wasn’t too worried about it,” Collaros said. “Initially you pray for the best and all the tests came back really positive and then Al and his staff and having Mark (Klassen, massage therapist) here was huge, too, to make sure we’re doing everything that we possibly can for me to be able to go out there and help the team win.” 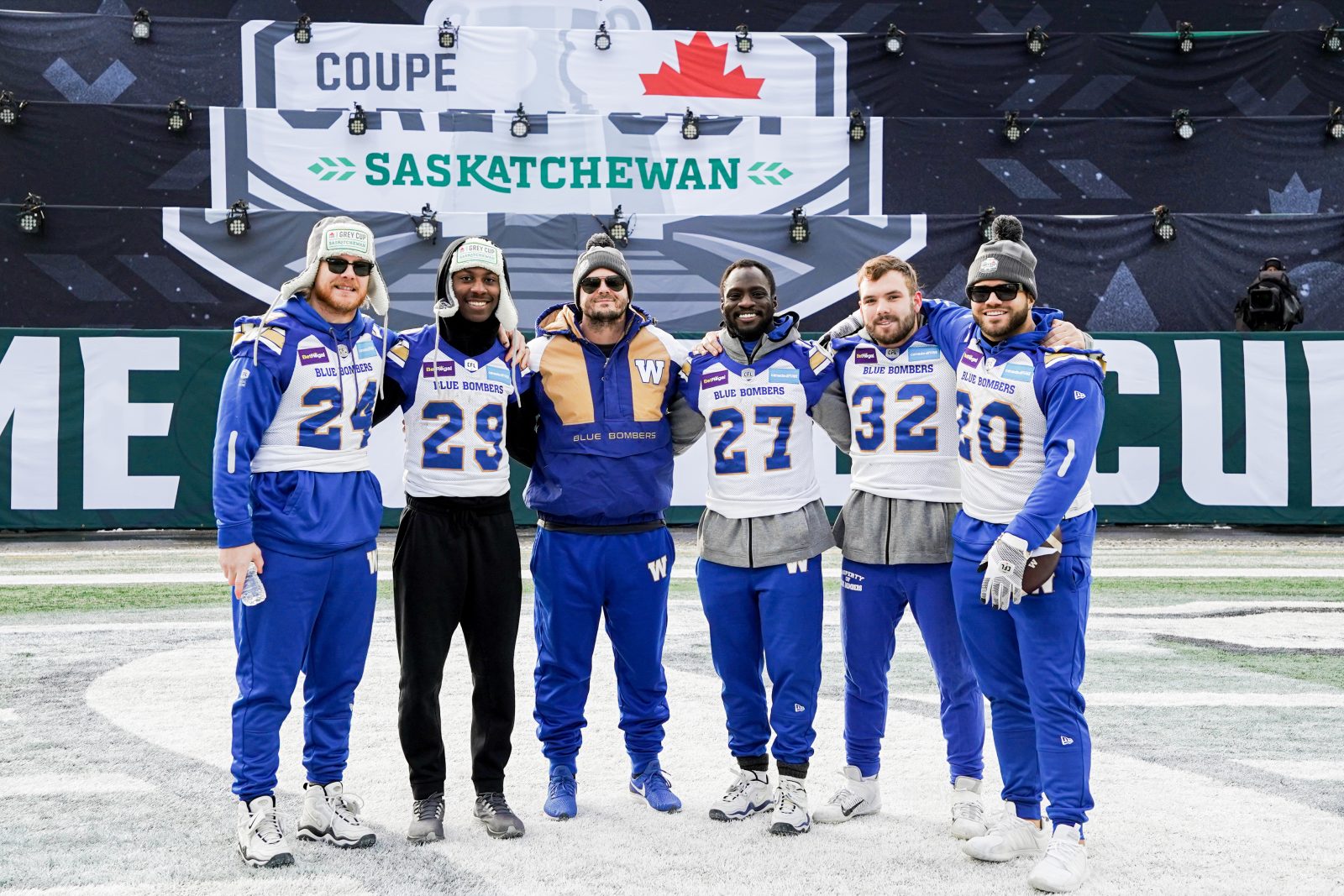 3. STUDENT vs. THE MASTER

It has been one of the juiciest subplots to Grey Cup week and it will be one of the key sidebars on championship Sunday. This just in: the 109th Grey Cup will feature old friend Andrew Harris in the Argonaut backfield and his replacement here in Winnipeg – his protégé and another Winnipegger in Brady Oliveira – getting the work in the Blue Bombers ground game behind their offensive line.

First, we give you Harris – whose exit from Winnipeg to Toronto this offseason in free agency was hardly the description of an amicable divorce.

“When I really look at the full spectrum of everything that’s happened the last five years and up to now, it is amazing,” Harris told media earlier this week. “I’d be lying to you if once I signed with the Argos that I didn’t have this date, the Grey Cup, circled in my mind.

“I know that locker room so well, the coaching staff so well, and was definitely embedded in the fabric of that team for so long and part of the change in the culture. It’s very impressive that they’ve continued to do what they’ve done and the season they’ve had. They just keep getting stronger, and it’s amazing. But now I’m on the flip side. I’m looking forward to trying to rip that down now.”

Oliveira, meanwhile, is at the peak of his game right now after a season which began with so much struggle finding traction. His 130-yard rushing effort in last week’s Western Final win was the 10th-highest rushing total in Blue Bombers playoff history.

“When you look back at how the season started, I mean, no one really knew how this season was going to shake out for me,” Oliveira said. “And if we’re going to be honest, I truly thought earlier in the year that I had lost my job. I dealt with some dark days. Me being from here, being a true Winnipegger, and seeing Tweets and comments on social media of people saying things like, ‘Why did we sign Brady? We should have kept Andrew’ or ‘Get rid of Brady and put someone else in there. He can’t do it for us. We can’t win football games with him in the running game.’

“Seeing all those comments… I thought I lost my job, and I was going to be put on the backburner. My back was against the wall, and I just kept fighting. Now I want so much to do everything I can to help this team win another Grey Cup.”