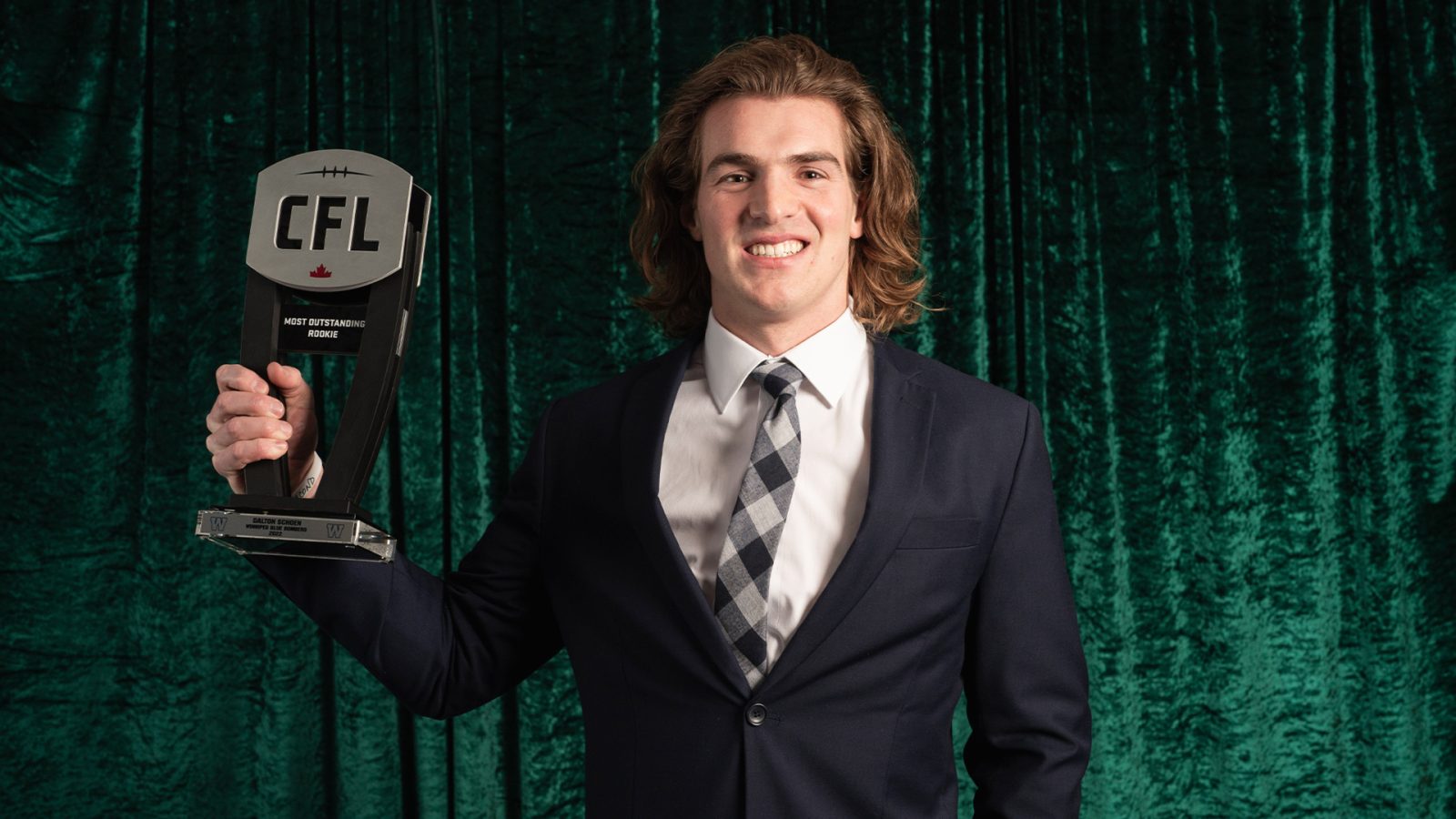 REGINA – They are the Winnipeg Blue Bombers Fab Four and they were saluted Thursday night as the best of the best in the Canadian Football League.

Critical now is the next and infinitely much more important step – making sure the whole band is recognized by triumphing Sunday in the 109th Grey Cup.

It marked the second straight year four Blue Bombers made acceptance speeches after Collaros, Bryant, O’Shea and Adam Bighill (Most Outstanding Defensive Player) were honoured in 2021.

“We had a quite a few nominees and award winners tonight but it’s the collective group that makes this game special,” said Collaros. “It takes everybody, not just the 24 (starters), but the special teams, the back-ups and the guys who are on the practice roster… you never know when your opportunity is going to come and those guys practice hard every day. 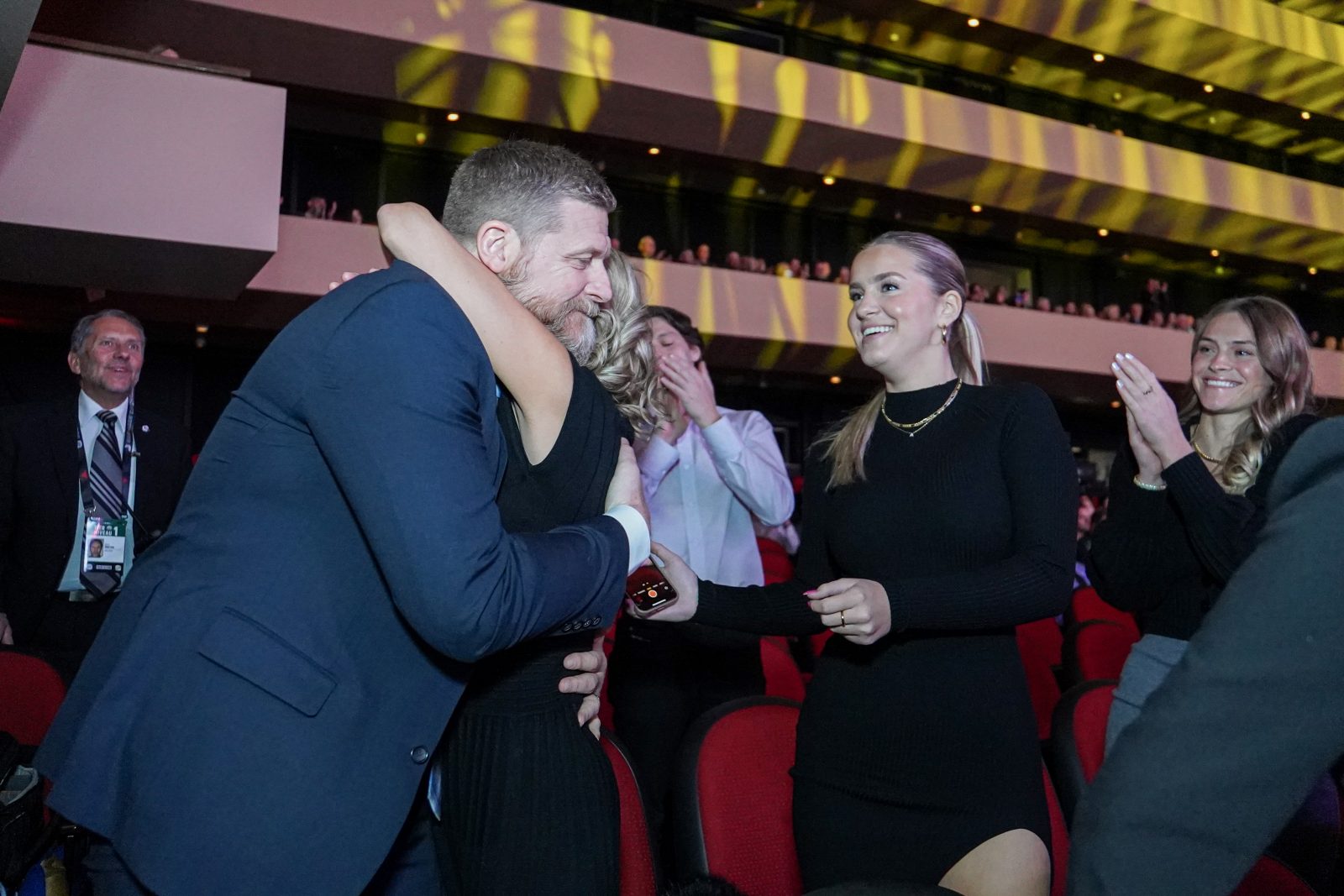 “I say it all the time: football is the ultimate team sport, and I can’t do my job if the other 11 guys aren’t doing their job in unison.”

“This is an amazing accolade and it’s not lost on me the history of the league, the people that have won it and the people who have been fortunate to win it two times or two times in a row,” Collaros said. “And to be even mentioned with any of those people is crazy to me.

“I can’t do my job at a high level if the other guys aren’t. You share all those moments, and you share the victories and the losses and working hard together. I think everybody should be recognized and win awards like this. ’Embarrassing’ is the wrong word… but what it’s all about is winning and we’ve done a lot of that in the past.”

Winning the other awards were:

The CFL Awards winners were selected by a panel of 50 voters, including the Football Reporters of Canada from all nine markets, members of the national chapter of the FRC and the league’s head coaches. 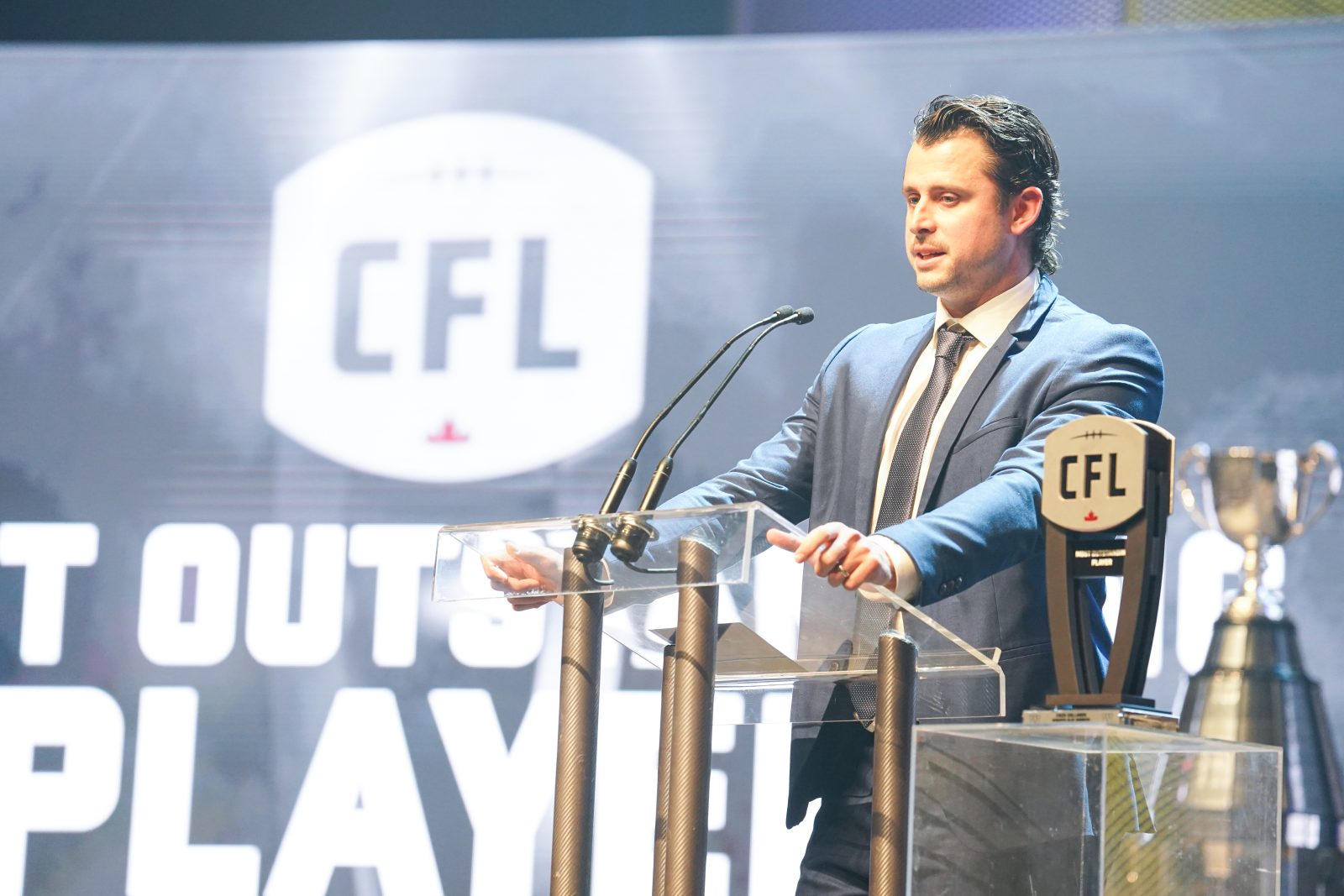 His 2022 season: Led the Blue Bombers to a franchise-record 15-3 mark, leading the CFL with 37 touchdown passes and setting a career best with 4,183 passing yards. He is the second Blue Bombers player to win the Most Outstanding Player Award in consecutive years after Dieter Brock in 1980-81.

His 2022 season: Bryant continues to anchor the left side of the Blue Bombers O-line and is part of a group that allowed the second-fewest sacks, produced a 1,000-yard rusher in Brady Oliveira and finished in scoring. This is his fourth time winning – honoured previously in 2017-18 and 2021) – more than any other player in the history of the award.

Bryant: “Winnipeg was a city and team where I knew (winning) wasn’t going to happen overnight. Each and every year we kept building and building, we got the key pieces, a great locker room to the culture change and we were able to start winning Grey Cups. I’m just happy I was a part of that and was able to be a part of that from the beginning and now to see how things are, it’s beautiful.” 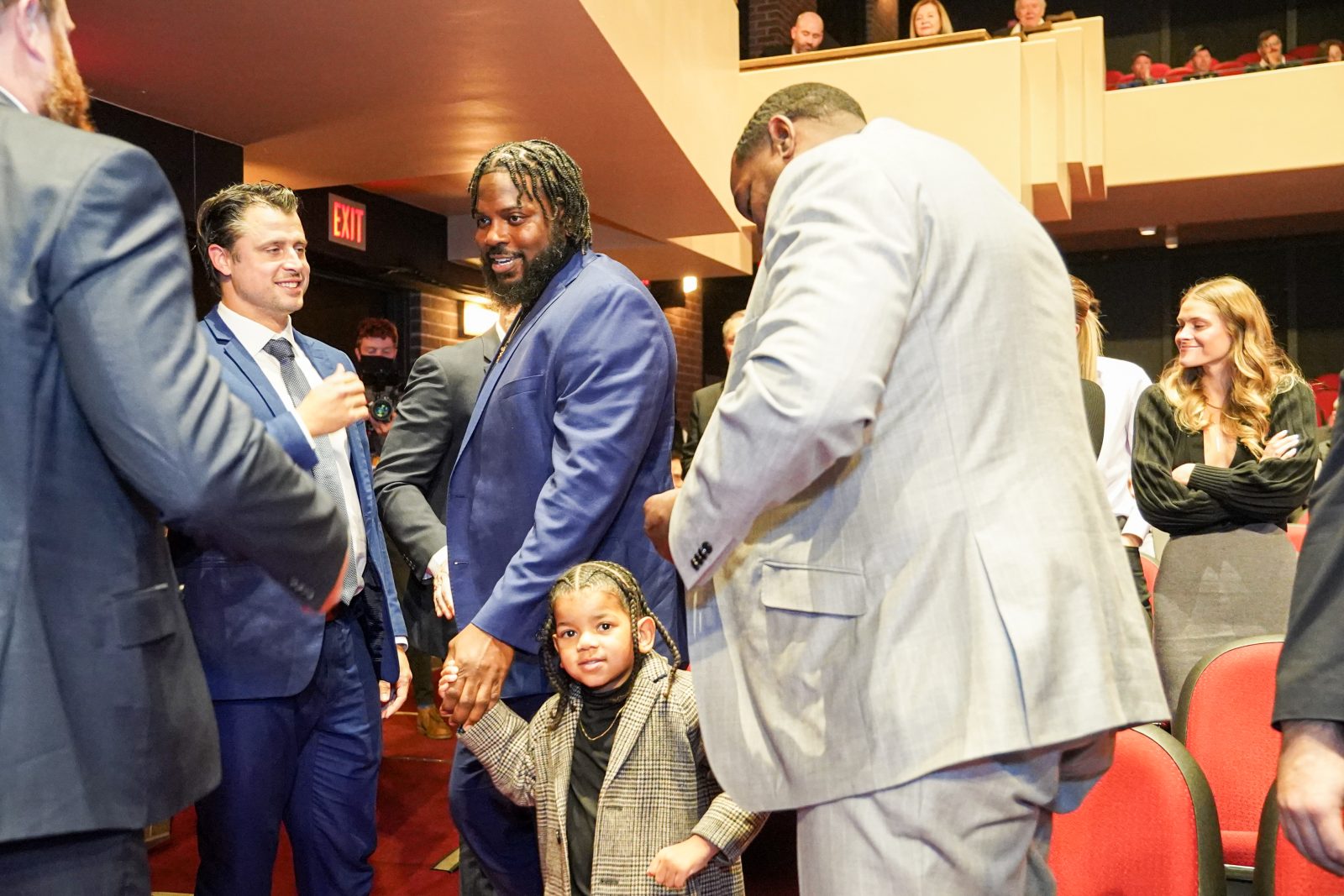 Schoen: “It truly is the people around me. I don’t know anything about any other teams in this league, but I know the Blue Bombers have such an incredible culture. It’s such an incredible organization. It’s the guys around me. I get to have the best player in the league throwing me the ball, we have a phenomenal O-line, we have great people running the ball. And for me the four other receivers who are starting in that lineup with me are guys who have done so much in this league and have so much experience and they never hesitated to help me.

“I try to tell people all the time, I have the best spot in the huddle – I’m between Woli (Drew Wolitarsky) and (Nic) Demski, two guys who have done it a long time with the Bombers. If I ever have a problem or if I ever want to talk to them about what I’m doing on a play, they’re right there. It’s all about the group around me.” 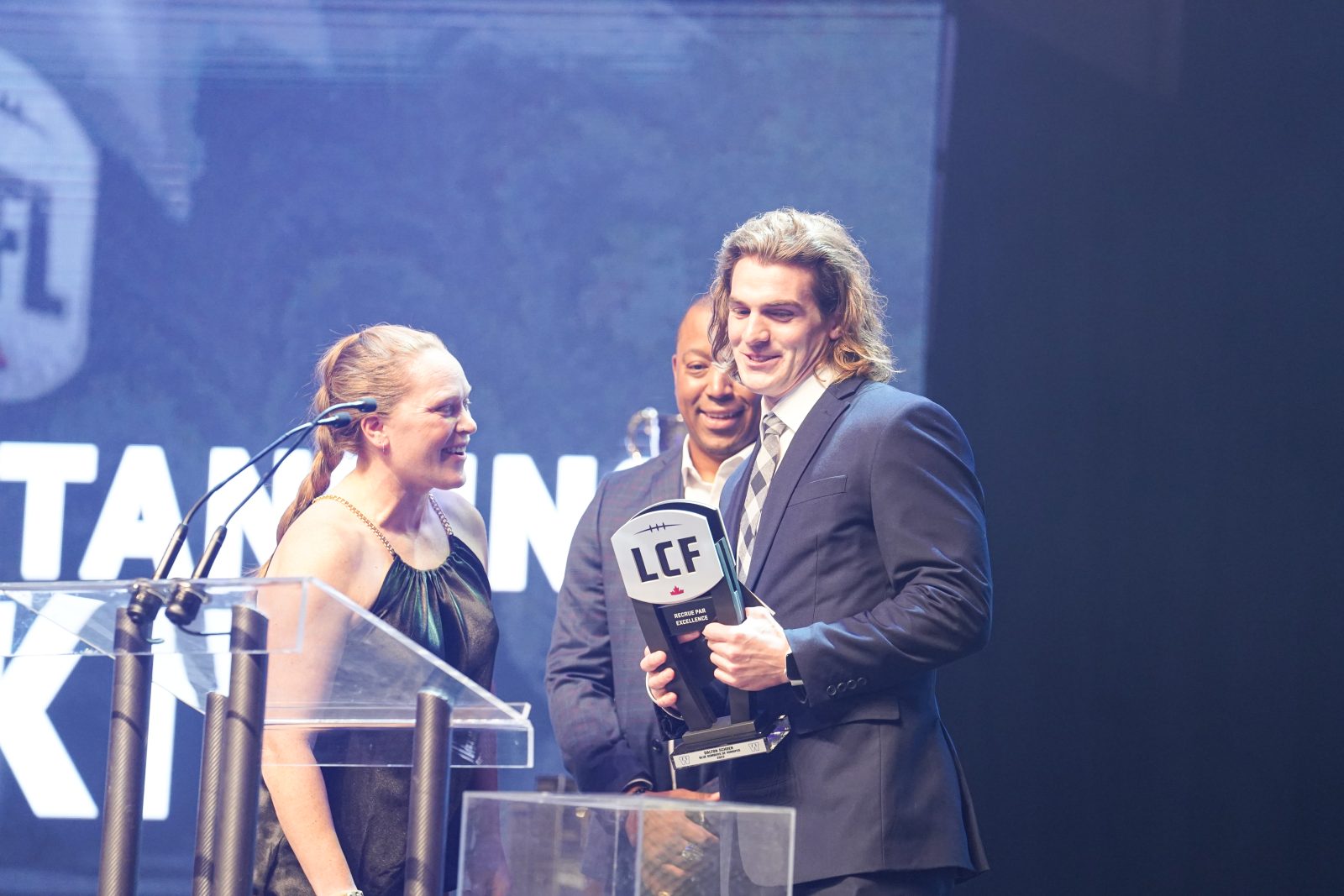 Coach of the Year: Mike O’Shea

The 2022 season: Helped guide the Blue Bombers to a franchise record 15 wins and has the team in a third consecutive Grey Cup. The club was once again the least-penalized team in the CFL, and he is now third in franchise history for all-time wins behind only Bud Grant and Cal Murphy.

O’Shea: “There are so many people to thank. So many people involved in this. It’s not easy standing up there singled out, it really isn’t, and it’s way more important to be on the field with a group of guys working for a common goal.