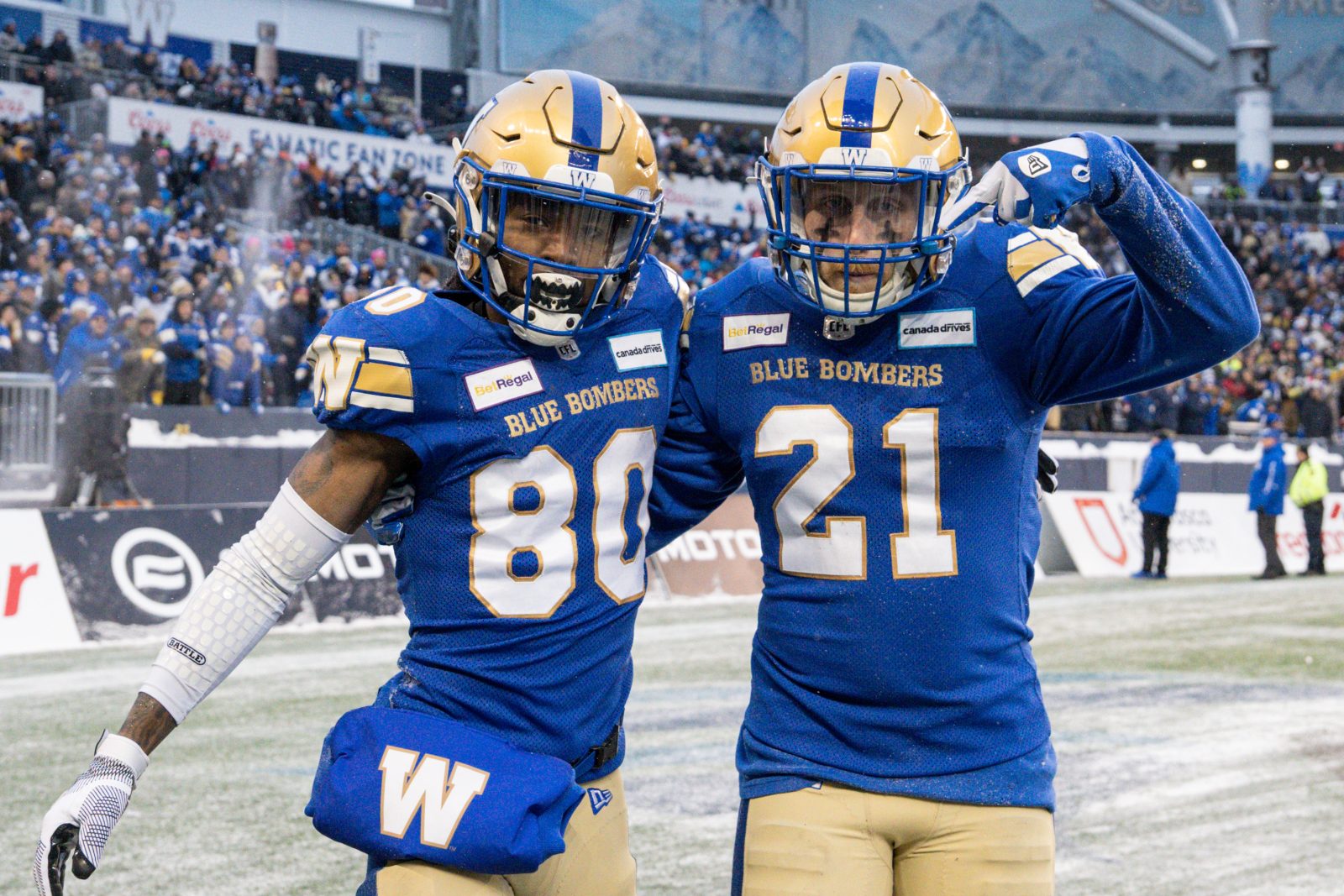 The sounds of the post-Western Final celebration pounded through the walls – a mix of human elation backed by the heavy bass from a series of music tracks – which said everything about the Winnipeg Blue Bombers in that exact moment.

Winning is hard, as they say. And that goes triple in the playoffs. So, yeah, there’s an obvious green light to soak up every single nanosecond of it.

Still, it was what the Blue Bombers who took to the stage for post-game media said collectively that spoke volumes about what the franchise has built over the last few years into a team now in its third straight championship game and on the cusp of a modern-day Canadian Football League dynasty.

Wrapped around the discussions about the Xs and Os, the game-planning, the big moments and individual performances came a common refrain.

“Everybody gets it. We all get it,” said quarterback Zach Collaros. “This is a big week and we’re going to sacrifice for each other for another seven days. We talked about buying more time to be teammates, so we bought one more week, which is awesome.”

Now, this can all sound cornball to outsiders, but part of the Blue Bombers mantra – and every bit as big as ‘going 1-0 each week’ – is the notion of honouring your teammates. That can represent itself in many forms, but it’s reinforced every day when you watch this team interact. 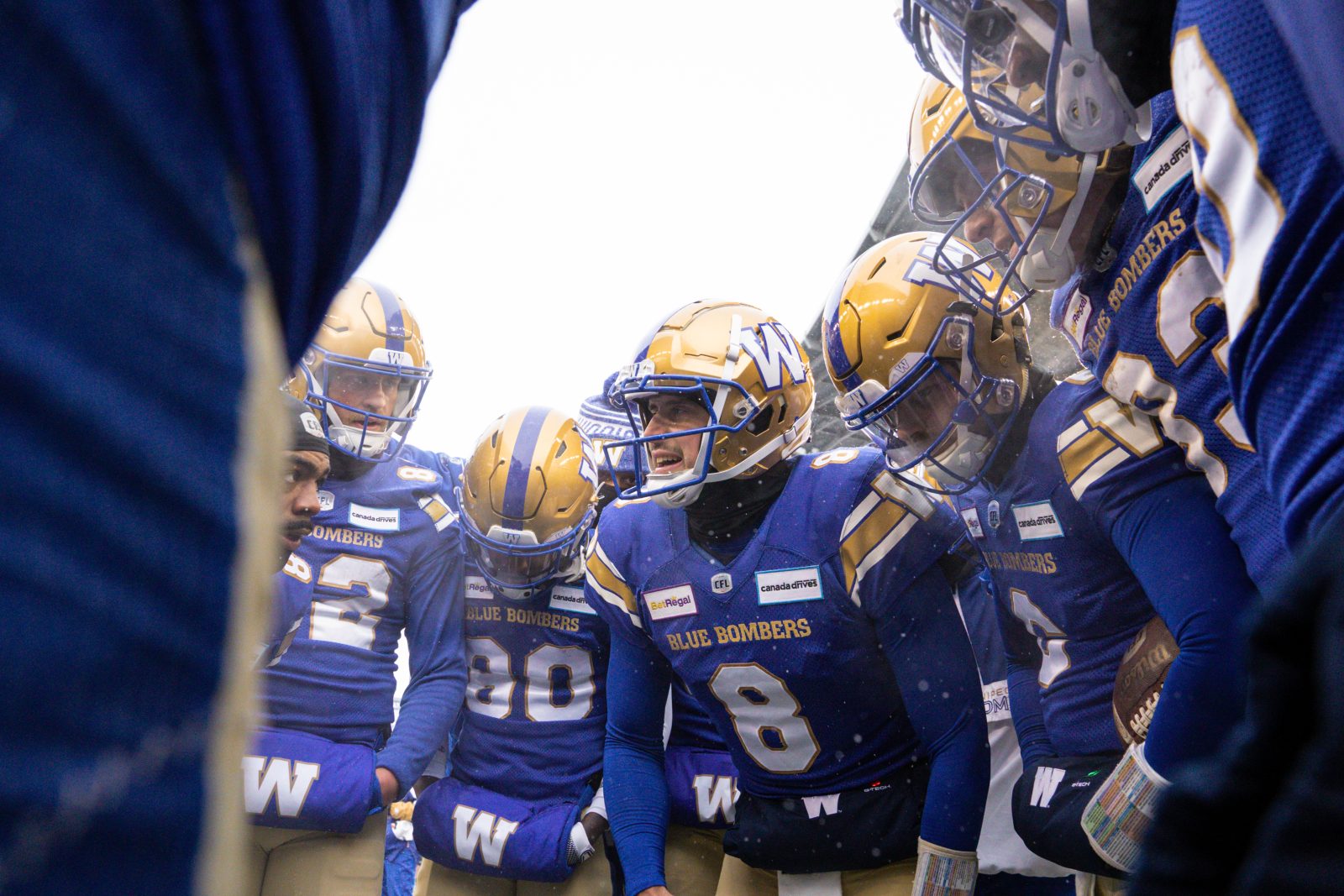 Simply put, there’s a Band of Brothers/fraternity feel to the whole scene in Bomberland that could be a case study in that magical and mythical sporting intangible – chemistry.

“The message (after the game) was we earned another week with each other,” said running back Brady Oliveira. “This locker room is so tight and it’s such a special locker room. I’ve never been a part of something like this before.

The evidence is concrete as to why this is such an important building block. The Blue Bombers posted a franchise-best 15-3 record this season and have a chance to do this Sunday what no other team in the long history of this club has accomplished: win three straight Grey Cups. 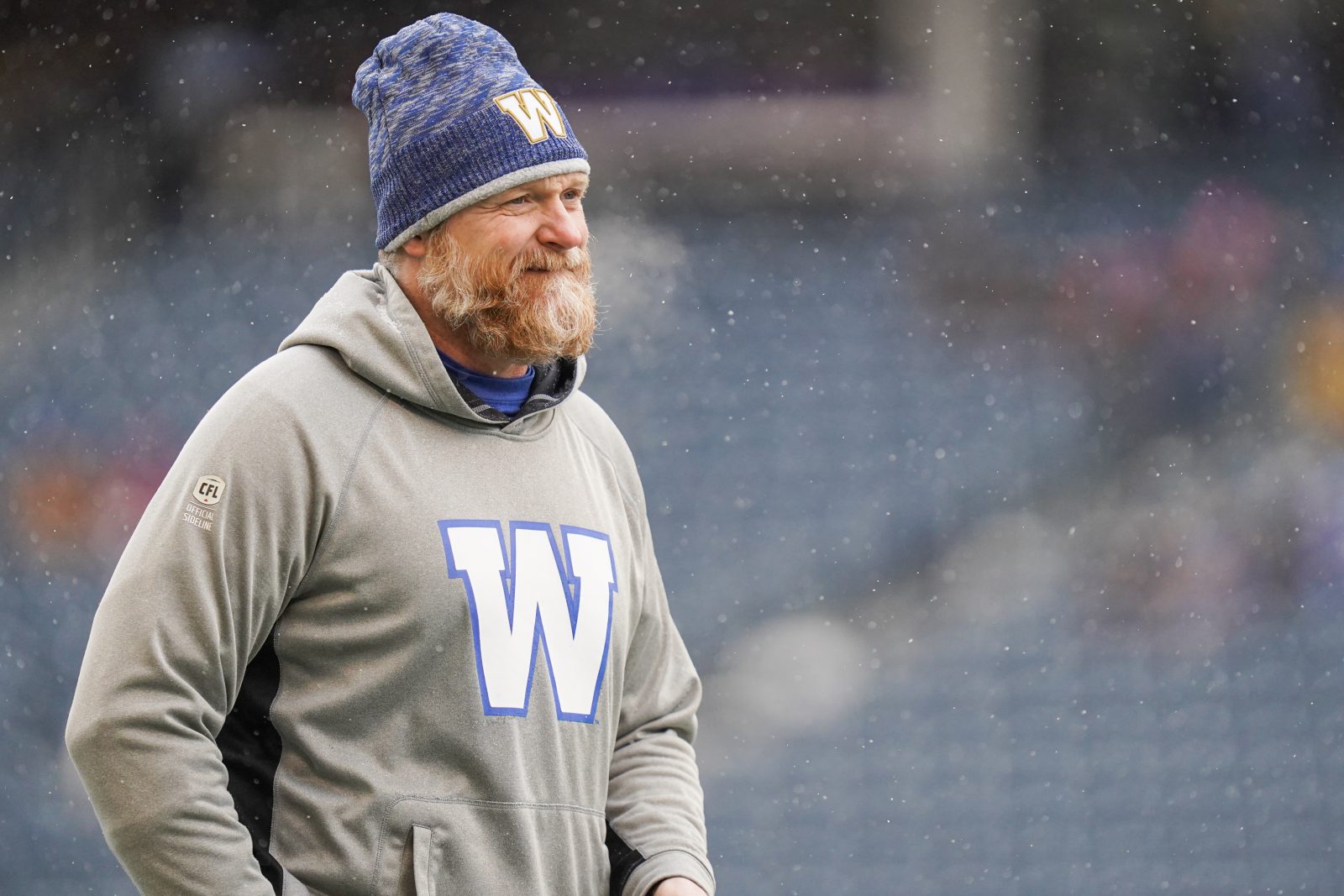 Those teams undoubtedly had the same cohesion, but to have it in an era of transient rosters due to wide-open free agency – to have players take less money to stay – says so much of the environment created here.

“It’s very pleasing,” said head coach Mike O’Shea Sunday night when asked about the players looking forward to spending another week together almost as much as chasing a third championship. “ I’ve said this before, but I get to stand back and watch. It’s not just the game, it’s practices, it’s the way they interact in the locker room, in this facility. I don’t ever get to go out with them – that’s too bad, I can’t do that – but it’s important that they have a great understanding of that.

TWO MAJOR GREY CUP STORYLINES HAD ALREADY EMERGED… before the final whistle had even blown Sunday night at IG Field and they will both dominate the days ahead of Sunday’s Blue Bombers-Argos clash.

First is the health of Collaros who had his right ankle taped after a hit from B.C. defensive end Sione Teuhema. Both Collaros and O’Shea showed no concern about his availability post-game, but Wednesday’s first practice in Regina – and whether the reigning Most Outstanding Player participates – will be revealing.

And if Collaros can’t go, that would mean Dru Brown and Dakota Prukop would move up the depth chart with a championship on the line.

“Not concerned. I think he’s going to be fine,” said O’Shea Sunday. “Dru and Dakota can both operate the offence. We’ve seen it this year. They’ve gotten meaningful reps and done well with them. It was the right thing to do at the time.” 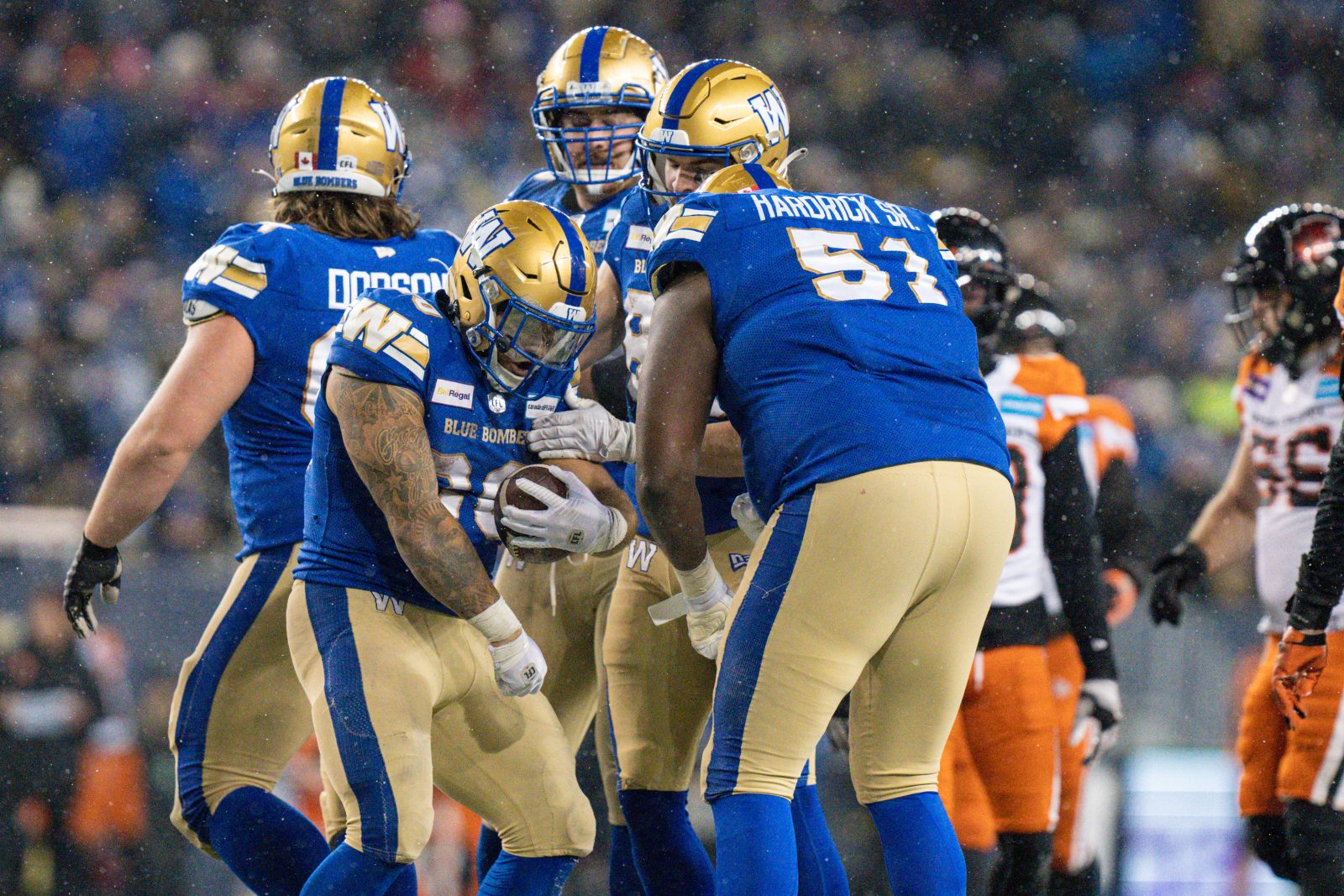 The other story, and every bit as compelling, is the Blue Bombers facing old friend Andrew Harris, who left for Toronto in free agency in the winter in what was hardly an amicable separation.

Said O’Shea of that being a talking point: “It’s probably going to dominate. And anything that can draw interest to our league, especially with that franchise, is a positive.”

It also makes for another related angle, with Oliveira – the protégé to Harris for a couple of seasons – battling his sensei.

“It’s going to be cool. Andrew and I still talk quite often,” Oliveira said. “He and I talked his week – he just had a baby, so congrats to Andrew. It’s going to be cool to see him. He taught me so much during his time here playing for the Bombers. He’s arguably one of the best running backs to play in this league and for sure one of the best Canadian running backs to ever play in the CFL.

“He taught me a lot. I was critically watching him to see if I could pick things out of his game and apply them to my game. He was a huge part in my career and in getting me to where I am today. I’m sure I’ll see him throughout the week. He’s still a good friend of mine and it’s going to be fun battling with him this week.”

And, for those interested, here’s what Harris told reporters in Toronto after the Eastern Final:

🇨🇦 Andrew Harris has no regrets with move to Argos, and he’s excited to be playing former team in #GreyCup. pic.twitter.com/2zQc3MXGkv

BEEN THERE, DONE THAT… many of the Blue Bombers have been through the whole experience of a Grey Cup week before. And for those that haven’t, vets like Bighill will have them tuned up lickedy-split.

Again, back to Bighill at the microphone after the win Sunday and with the music from the dressing room pounding through the walls. Asked how long he and his teammates would enjoy the Western Final win, he said:

“I’m already past it. A lot of guys are already past it. This game is behind us. There’s some things we need to learn from, yes. Will we look at some of the film? Yes. It’s laser-focus work for this next week and our guys understand the distractions of the week and what this is like. It’s different. You’re not in your home stadium, you’re not in your home routine, there’s more media, more obligations… there’s just a lot.

“The guys understand it’s all about work and we’re ready to go for the prep for this next week.”

NOT ENOUGH CAN BE SAID ABOUT THE BLUE BOMBERS DEFENCE… and what they did to corral Nathan Rourke and the Lions’ high-powered offence. B.C. had 15 offensive possessions Sunday – including the crazy end-of-the-game pass completion/frenzy of laterals – and seven of them ended in punts, one was a James Butler fumble, two ended in Rourke interceptions while the Lions were stuffed on a third down short yardage play. The Lions also got a Sean Whyte field goal, a two-yard run by Antonio Pipkin after a punt-return fumble by Janarion Grant and a late Rourke-to-Alexander Hollins TD that made the final 95 seconds interesting.

Bighill was asked to explain the fight to get pressure on Rourke, who was sacked twice in the game, and spoke of how the Lions kept a running back/fullback in for protection and often had a receiver at the line, too.

“So, essentially they’re blocking seven on four,” he said. “I know we can all do some sort of math in here – they’ve got three extra blockers than we do. But that gives us more opportunities in coverage to take away receivers so obviously he’s going to hold the ball, he’s going to have more time.

“But you saw him going from read to read to read to read and not being able to complete throws. That’s a bit of the chess match in this game. We understand that and our DBs did what they are supposed to do, and our front got as much pressure as they could. We got off the field a lot tonight and we did a pretty good job.” 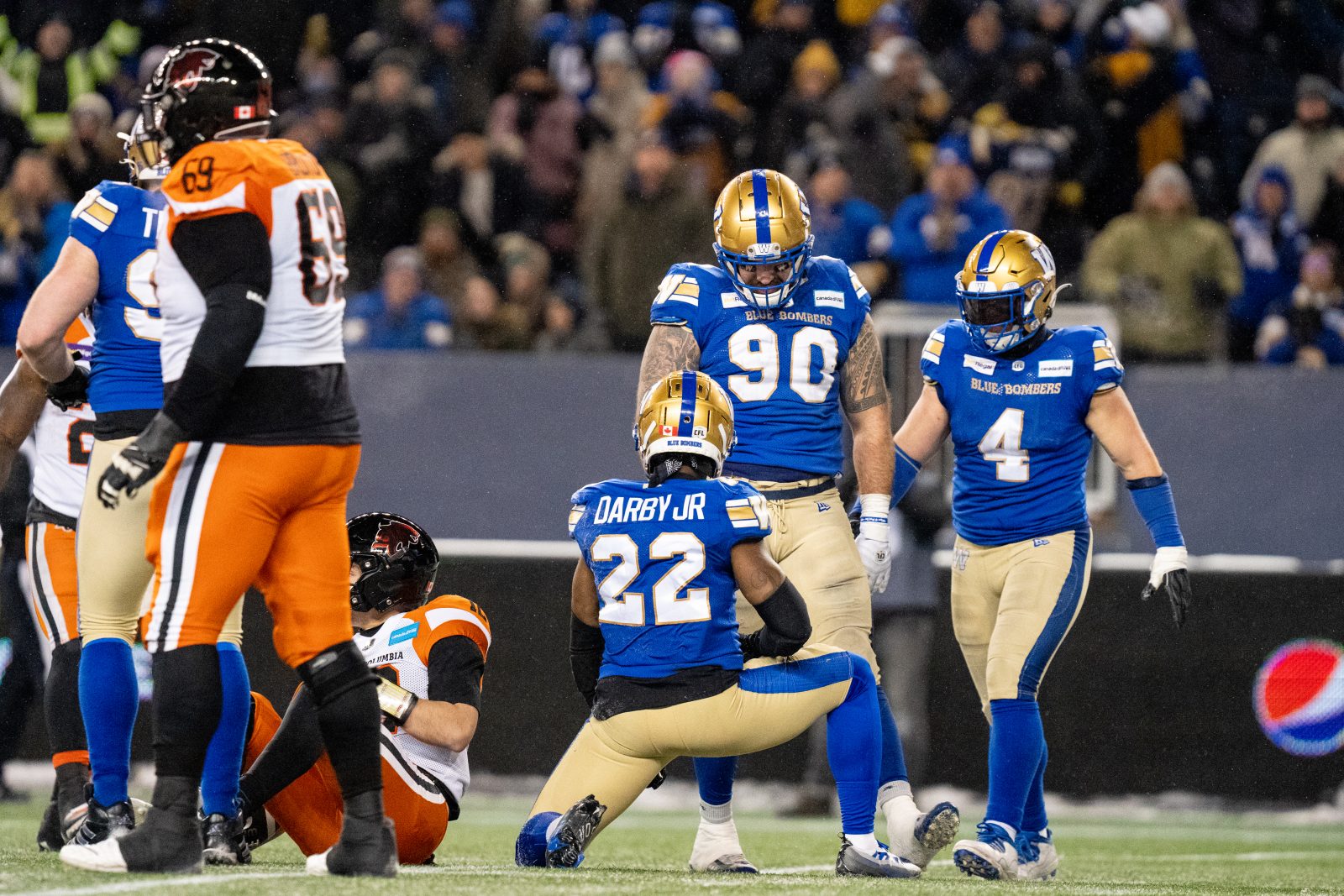 SOME EARLY GREY CUP NUMBERS… has Vegas favouring the Blue Bombers by five points this Sunday and Winnipeg’s over/under at 26.5 points.

The two clubs met only once this year – back on July 4th in Toronto – in a game that seems eons ago. Sunday’s long-range forecast, for what it’s worth, calls for a sunny conditions during the day with a high of minus four.

AND FINALLY… it was one of those ‘you had to be there moments’ Sunday when Janarion Grant spoke to the media after the Western Final and addressed the low of fumbling a return that led to a B.C. touchdown to answering with a spectacular 92-yard return for a score.

Grant called it “glorious, just being able to come out there and make something happen for my team… it started off slow, but when I picked it up, I just kept it going.”

At the back of the room, waiting for his turn to address the media, Collaros let out a dog bark.

“I don’t think there was a doubt after the circumstances that Janarion was going to make a play. That’s why I barked in here – that was me barking when he was up here – he’s just a dog, man,” said Collaros. “I think it takes a different animal, a different kind of person, to be a kick returner. I know that was a punt he returned, but he also really just sticks it up in there on kickoffs. It’s just impressive. He’s just a dog, man. He’s a dog.”