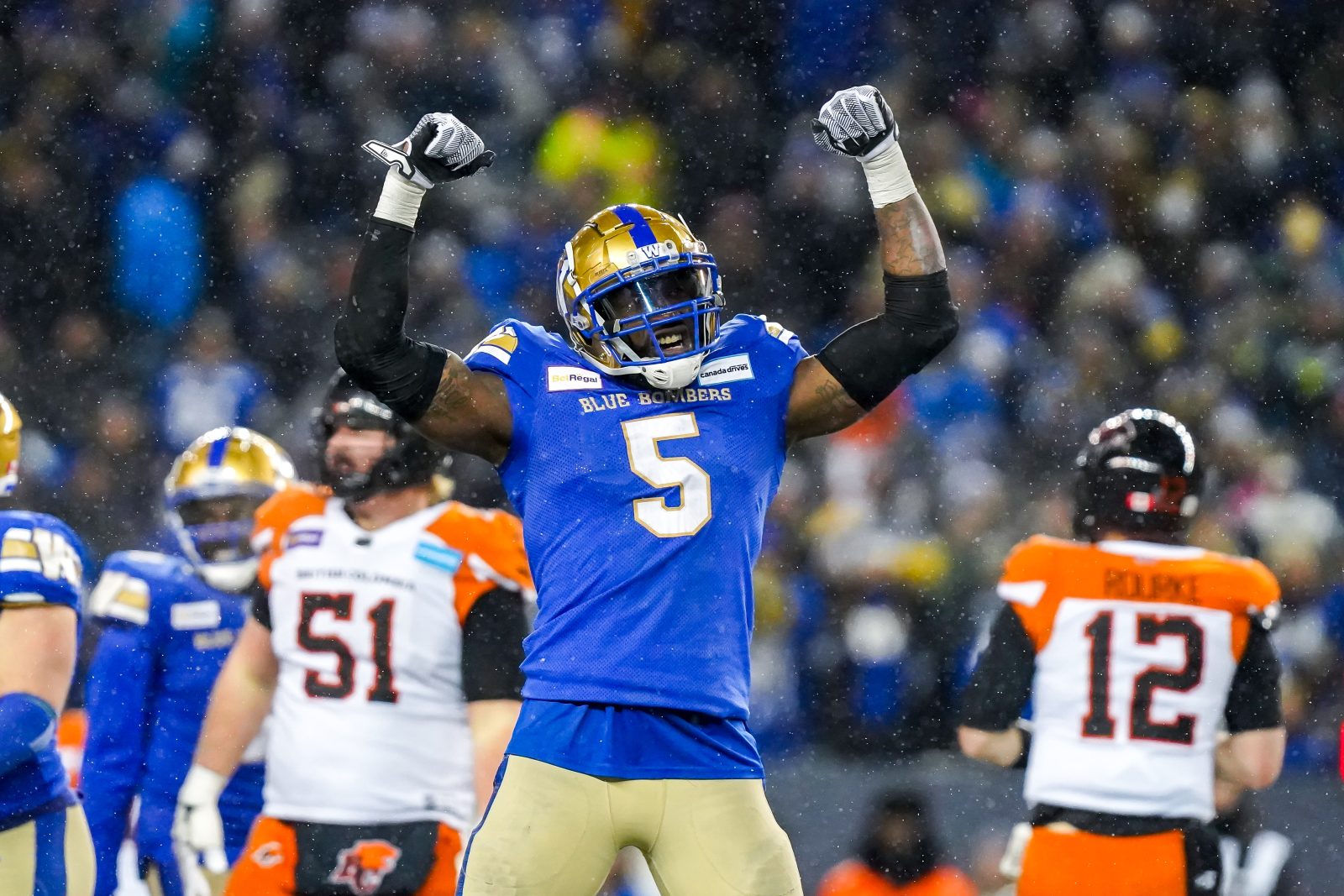 It doesn’t get old – certainly not in these parts, at least – and there is absolutely nothing redundant about the Winnipeg Blue Bombers appearing in the Grey Cup.

So, excuse everyone in Bomberland if they opt to savour a third straight berth in the Canadian Football League’s championship game just a little bit longer than usual.

The Blue Bombers punched and scratched their way to the 109th Grey Cup Sunday with a 28-20 Western Final victory over the B.C. Lions in front of a raucous 30,319 at IG Field, earning the opportunity to become a modern-day dynasty with a possible third consecutive title.

“These moments are so special. It’s amazing,” said veteran middle linebacker Adam Bighill. “It’s hard to put into words what it’s like to be here. As I told all these guys today, everything we’ve done this entire year, all the work is for right now. It’s for this moment and these are the moments that matter.

“For us to have the opportunity to have seven more days together – to practice together and be together again and continue to put in the work… it’s so special. It’s really hard to put into words. It’s a special opportunity that not a lot of people get to have. I’m so proud of the guys in our locker room.”

And as if chasing a third title isn’t juicy enough of a storyline, there’s this: the Blue Bombers will meet old friend Andrew Harris and the Toronto Argonauts after they knocked off the Montreal Alouettes 34-27 in the Eastern Final. It will mark the seventh Grey Cup meeting between these two historic CFL rivals, but the first since an Argos victory in the 1950 ‘Mud Bowl.’

The game did end with a massive question mark, as Zach Collaros was not on the field for the Blue Bombers’ final possession after apparently suffering an ankle injury after a tackle from B.C. defensive end Sione Teuhema. Collaros had the foot/ankle taped and threw briefly on the sideline, but after initially stepping onto the field for the final possession, instead gave way to Dru Brown.

“I’m feeling good,” Collaros said in his post-game media session. “For this organization to be going back (to the Grey Cup) three times in a row is pretty unbelievable. I’m truly happy. I’m really grateful to be a part of it. I’m happy for the guys in the locker room. Total team effort, as per usual. Unbelievable atmosphere our fans brought. It was just amazing.”

Asked how confident he is about starting next Sunday in the Grey Cup, he said: “Not a question.” 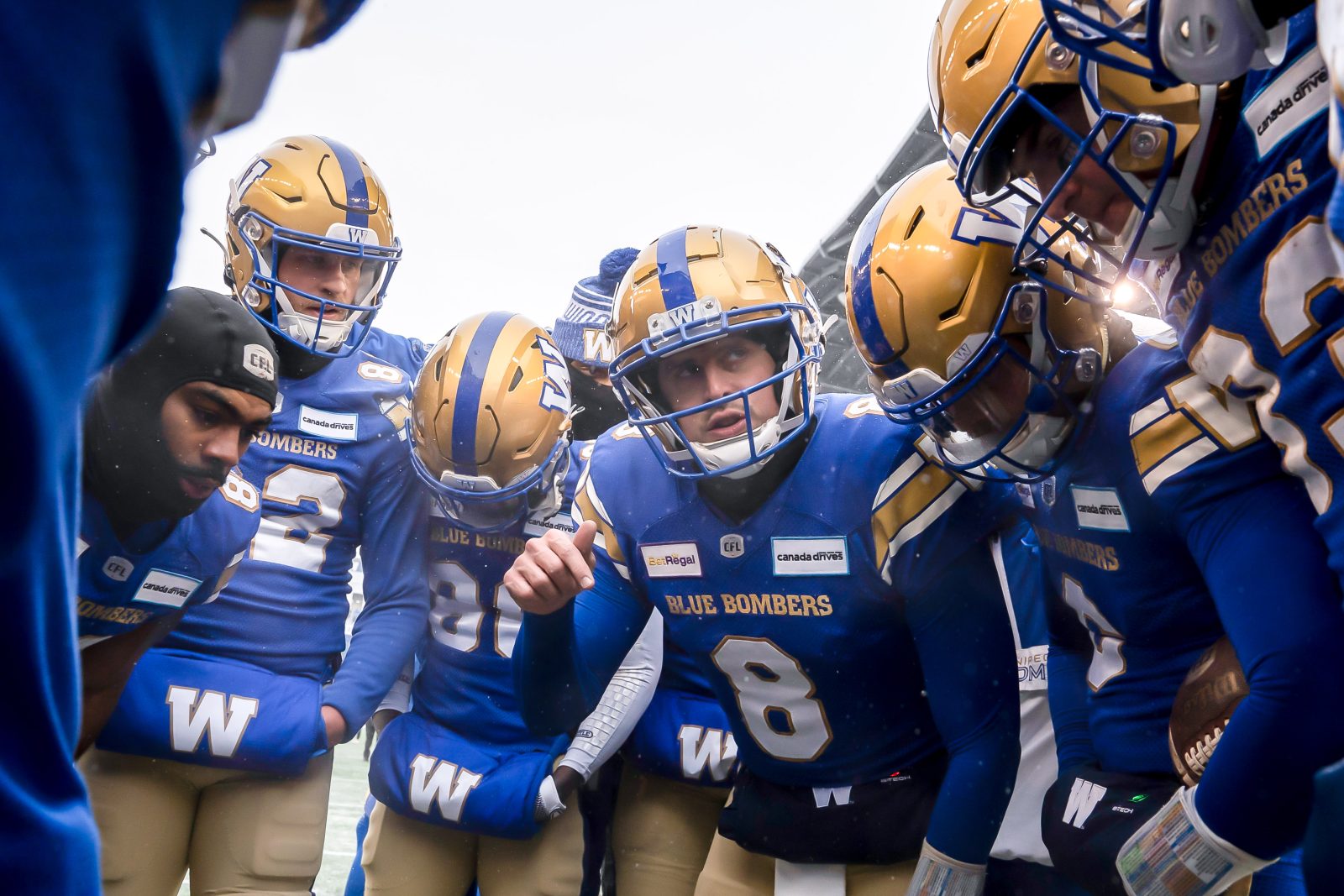 The ’22 Western Final unfolded with many similar themes to the game last year, what with the two teams combining for six turnovers and with the weather conditions impacting the ability to pass effectively.

And, most of all, it looked familiar because the Blue Bombers were able to dominate the line of scrimmage with the defensive front, limiting the effectiveness of Lions QB Nathan Rourke – who threw for 300 yards and a TD but was intercepted twice – and the offence grinding out massive chunks of real estate along the ground.

The Blue Bombers finished with 173 yards rushing, including 130 by Brady Oliveira on 20 carries.

“It’s super special,” Oliveira said. “I’m a proud Winnipegger and seeing that stadium today and how loud those fans were… every single time I was running it’s like I want to go out there and honour my teammates, of course, and then secondly, I want to go out there and play for the city of Winnipeg. They’re the best fans in the league and they deserve to see us play in another Grey Cup. 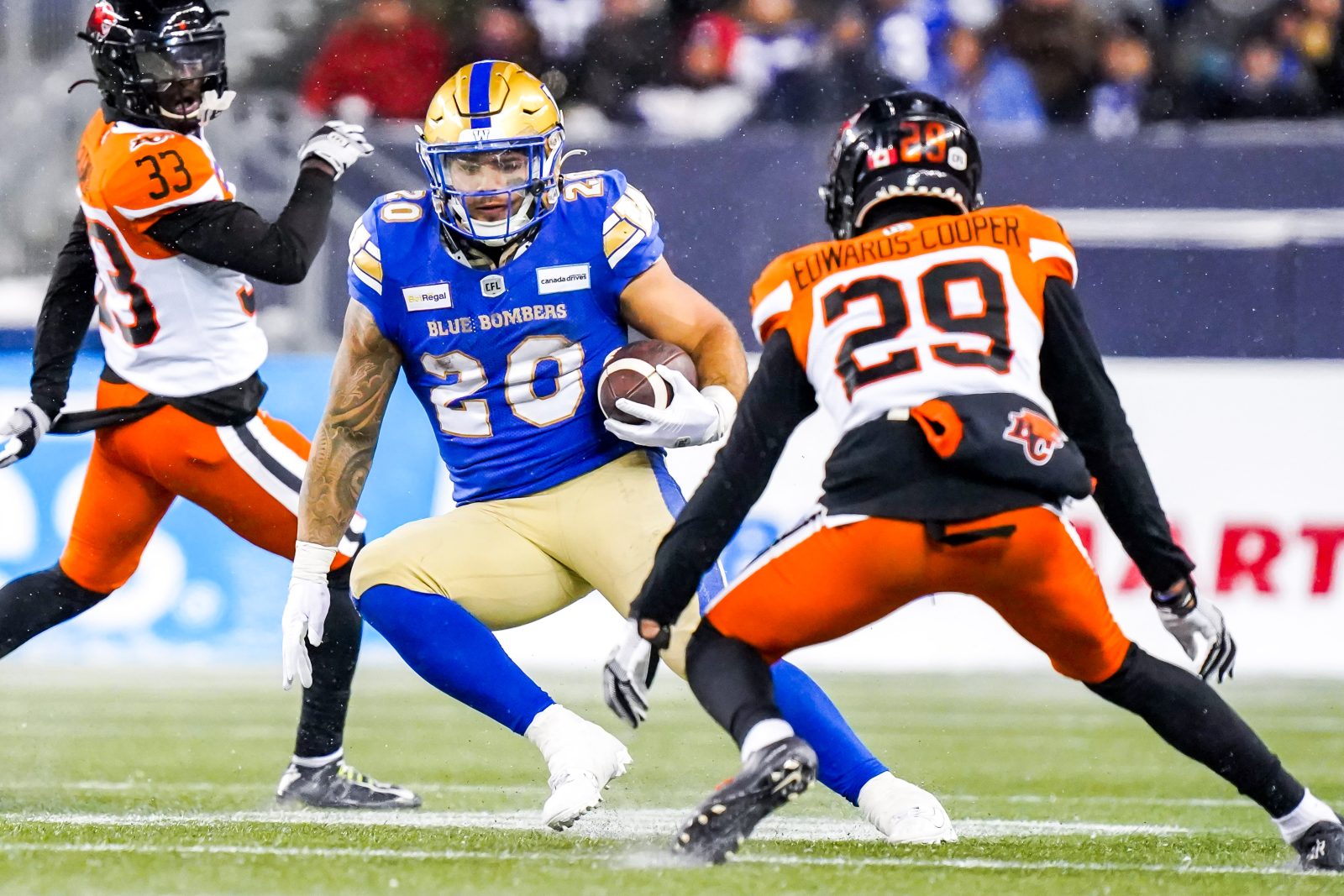 “Lots of backs do that,” said Oliveira with a shrug. “You’ve got to not go down on the first tackle, you’ve got to break arm tackles, you’ve got to make people miss. The great ones do that. So, I want to continue to elevate my game, continue to show people I can do that. I just think I’m hungry personally. Just how my season started and where we’re going… I just want to win another Grey Cup. I want to bring another Grey Cup back to the city. I really want to bring a Grey Cup back to the city.”

The Blue Bombers got touchdowns from Dalton Schoen on a pass from Collaros in the first quarter, on a 92-yard punt return score from Janarion Grant and a one-yard sneak from Dakota Prukop.

But they also got in their way at times with a Grant fumble gifting the Lions their first TD, with Marc Liegghio missing two converts – including one that was returned for a safety – Collaros being intercepted in the end zone.

“That’s as odd a game as you would ever see unfold,” said head coach Mike O’Shea. “It just was… it’s hard to describe. There were just so many little things going on throughout the game that prevented you from taking hold. I’m sure they believe they missed some opportunities, too.” 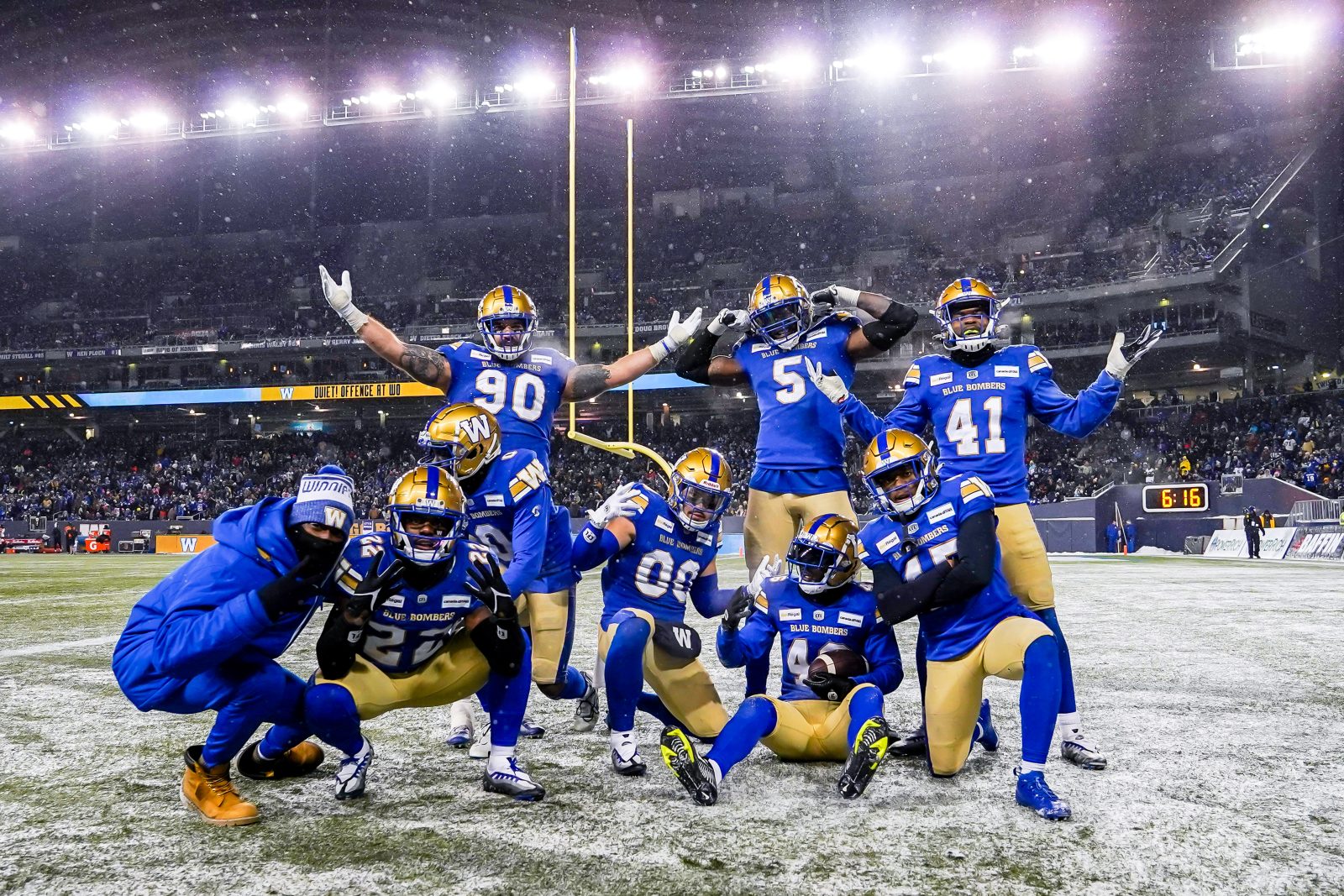 “But the win is great, especially surviving some of those things. We’ve got a good football team, so they’re able to do that. I’d just like to see it a little cleaner, that’s for sure.”

A plucky Lions team was able to make the final few minutes interesting with a late Rourke to Alexander Hollins TD, but some iffy clock management – largely due to the crowd noise – severely impacted their chances of tying the game late.

“If you look at that last drive and how hard it was for the receivers to get the call and get lined up to play a football play, that’s the kind of effect our fans have,” said Bighill. “That’s why we love our fans and why homefield advantage can be such a big deal.

“We were two-and-out a lot early on, we were stingy, we made some plays, we had some turnovers – third and short we got off the field, some picks. We took away a lot of his reads and made him hold onto the ball, made him have to use his legs to try and extend drives. A lot of the throws were contested out there and that’s the way we wanted it. Our back end played great; our front got after him. We made it hard on them all night. We didn’t really give them anything. They had to earn everything tonight. They had a few good games at the end and made it a game, for sure. But we were dialled in.” 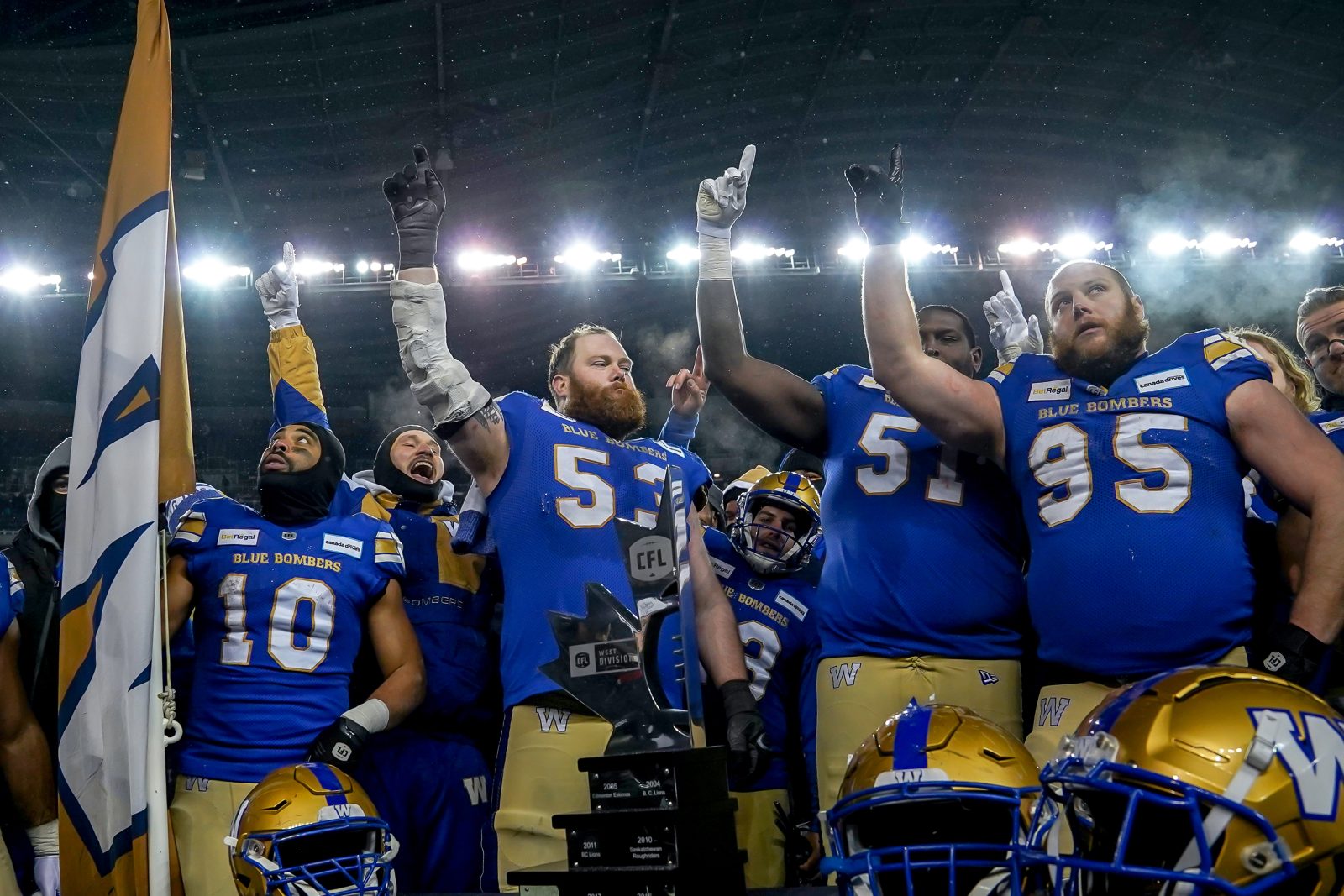 The Blue Bombers were in control after a Liegghio field goal put them up 28-13 early in the fourth quarter, but the Lions late score kept the game in the balance.

B.C. got the ball back on their own 14 with 1:35 remaining, but Alden Darby, Jr. sacked Rourke on first down, pushing the Lions back even further. That started a chain of events that led to the fans being at full throat and the poor B.C. clock management in the final minute.

Rushing yards by the Blue Bombers, as part of a day that saw the club crank out 361 yards net offence.

Offence: Brady Oliveira, RB: The hometown tailback was sensational with 130 yards on 20 carries, adding another 37 yards on four receptions. Just a marvellous performance

Defence: So many candidates, but Winston Rose finished with eight tackles and an interception.

Special teams: Janarion Grant, KR: It wasn’t a clean game – a first quarter mistake on a fumbled punt led to a Lions TD – but he made up for it with a sensational 92-yard score two returns later. Finished with 165 yards on punt (107) and kickoff returns (58).

The Blue Bombers finish the season 9-1 at home and are now 17-1 at IG Field over the last two seasons, including the last two Western Finals. Winnipeg is now 28-2 in its last 30 at home.

The Blue Bombers captured their 27th division title with the win. No CFL team has won more division titles than Winnipeg’s 27, followed by Edmonton (23), Hamilton (22), Montreal (18), Toronto and Calgary (17).

Winnipeg is in its fourth straight division final, a first since 1982-85.

The 109th Grey Cup vs. the Toronto Argonauts in Regina next Sunday, November 20th, 5 p.m. CST.