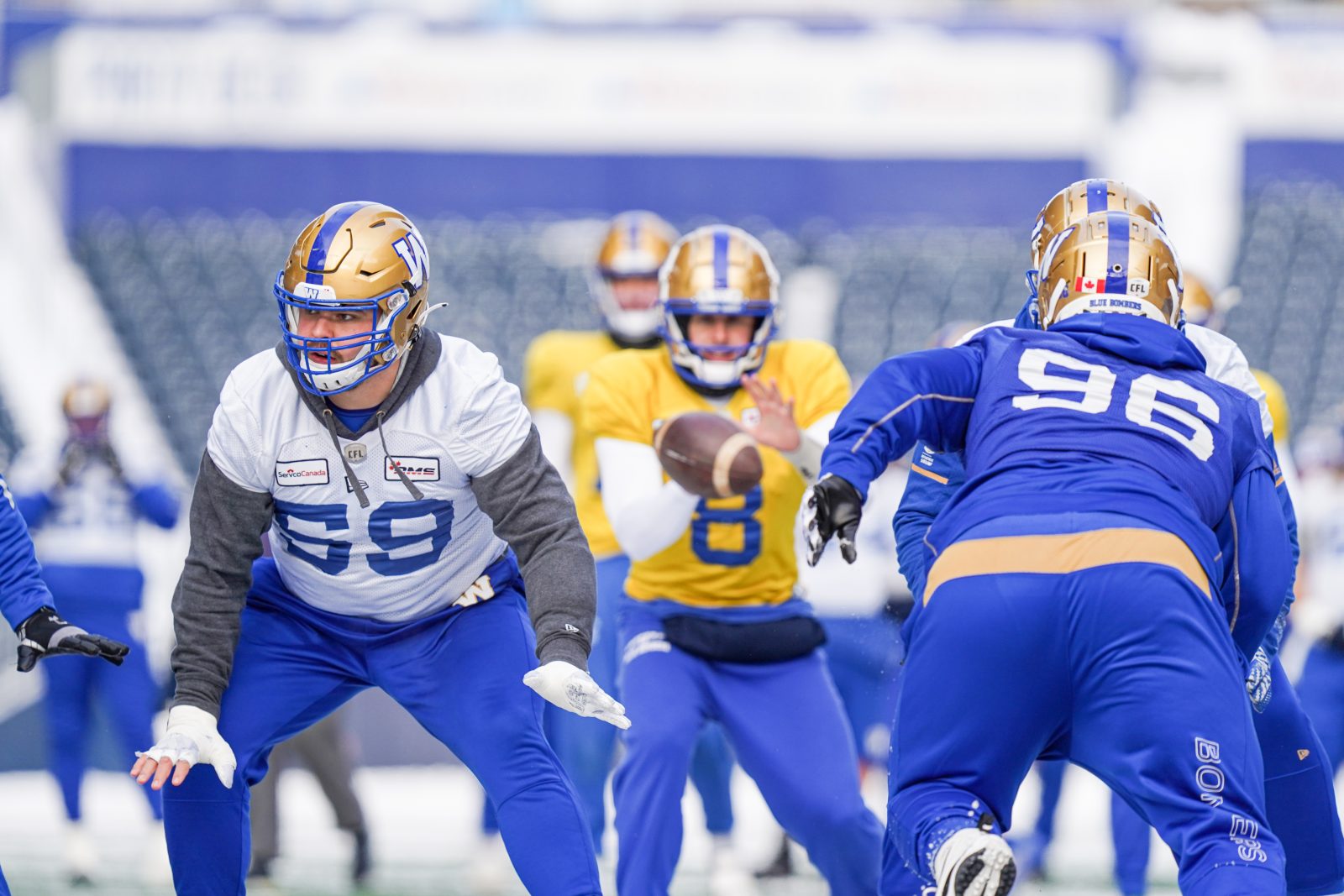 Nic Demski had already done his brave-the-elements flex earlier in the week – twice, in fact – by going sleeveless during a pair of Winnipeg Blue Bombers practices in what has been a frosty/snowy/frigid few days in River City.

And so, the hearty Winnipegger woke up Friday thinking he’d change up his routine a bit and don the long sleeves under his practice jersey to just be as cozy and comfy as possible in the last full session before Sunday’s Western Final against the B.C. Lions at IG Field.

“Then I see Brady (Oliveira) and Dalton (Schoen) going with no sleeves today,” began Demski, sporting a large grin. “I mean, Dalton even gave me a couple nudges about it, so did Brady. It was just their way to say, ‘Screw that. You’re not wearing sleeves today.’ It’s part of the mental warfare and you have to go through it to get used to it.”

The weather has been a storyline all week in these parts, and it was only magnified further with the big dump of snow Thursday night which blanketed the city and had those venturing out Friday morning cursing as they shovelled. 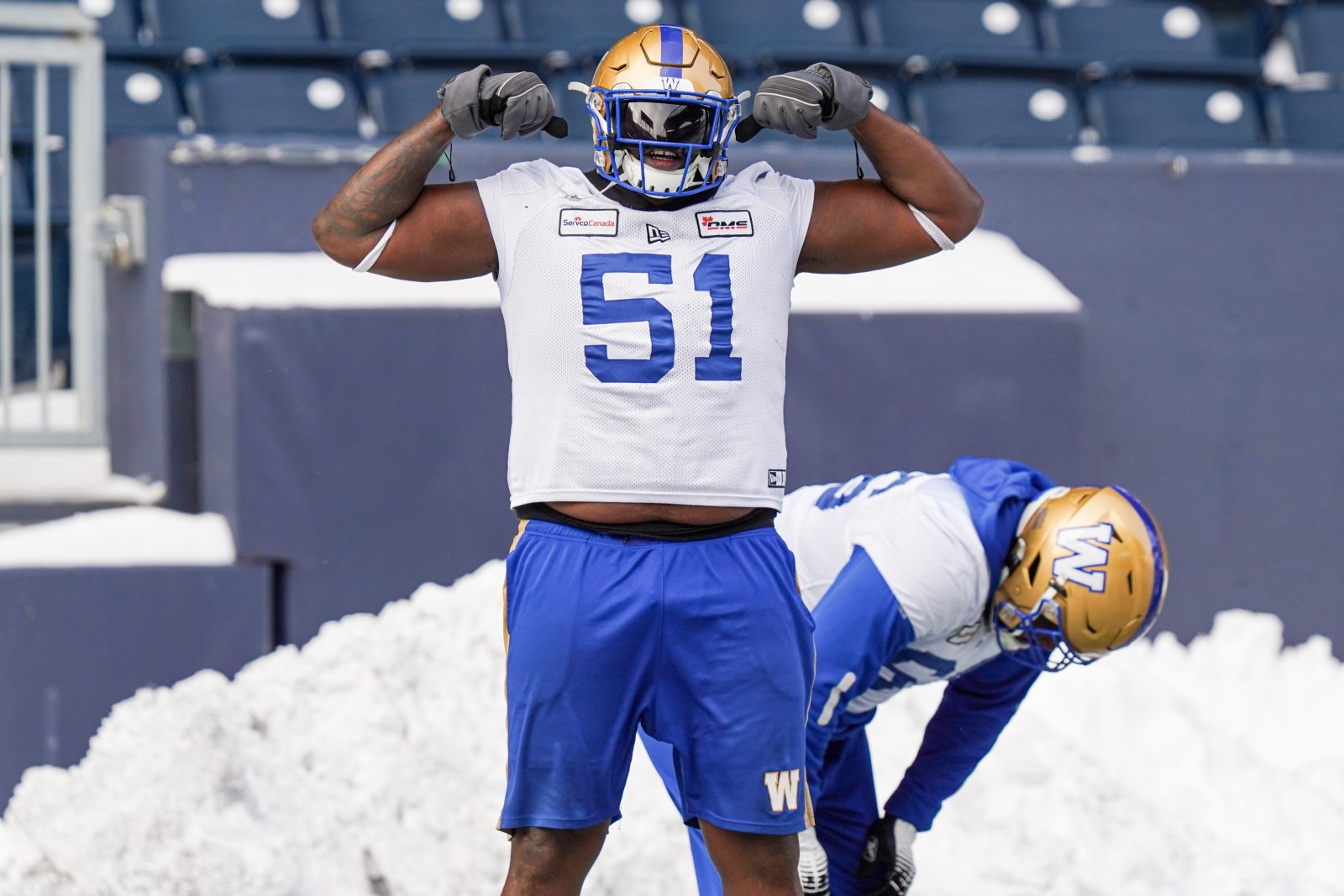 “I almost cried. I wish it would do that for three more days,” said right tackle Jermarcus Hardrick, who grew up in Mississippi. “It was beautiful out there today.

“Snow was everywhere… the wind was blowing… you can feel that there’s football in the air. I love it… out there with my guys. I’m just ready to play ball.”

The Blue Bombers already hold a considerable homefield advantage considering this team is on a 27-2 run at IG Field dating back to a Banjo Bowl loss in 2018. Going back even further, the club is 36-8 at home since the start of 2017.

A couple of other notes about the 27-2-mark worth mentioning:

Factor the weather conditions on top of that, and there is a real sense of comfort that envelops everyone in blue and gold.

“We’re just really big on protecting our home,” explained defensive end Jackson Jeffcoat. “This is our house. Losing a game here is almost embarrassing to us, and so we always want to come out and give the best product we can at home.

“This weather brings me back to being a kid in Buffalo, N.Y. and playing in tons of snow. We’d be out all day and my mom would be saying, ‘You guys are going to get frostbite.’ We were Texas-(born) kids, but we always wanted to be outside. That’s what I feel when it snows.

“Winter is one of my favourite seasons – maybe not a Winnipeg winter – but I just enjoy it. It’s like being a kid again. We’ve earned the right to be in this cold weather. That’s what we embrace. It’s fun.” 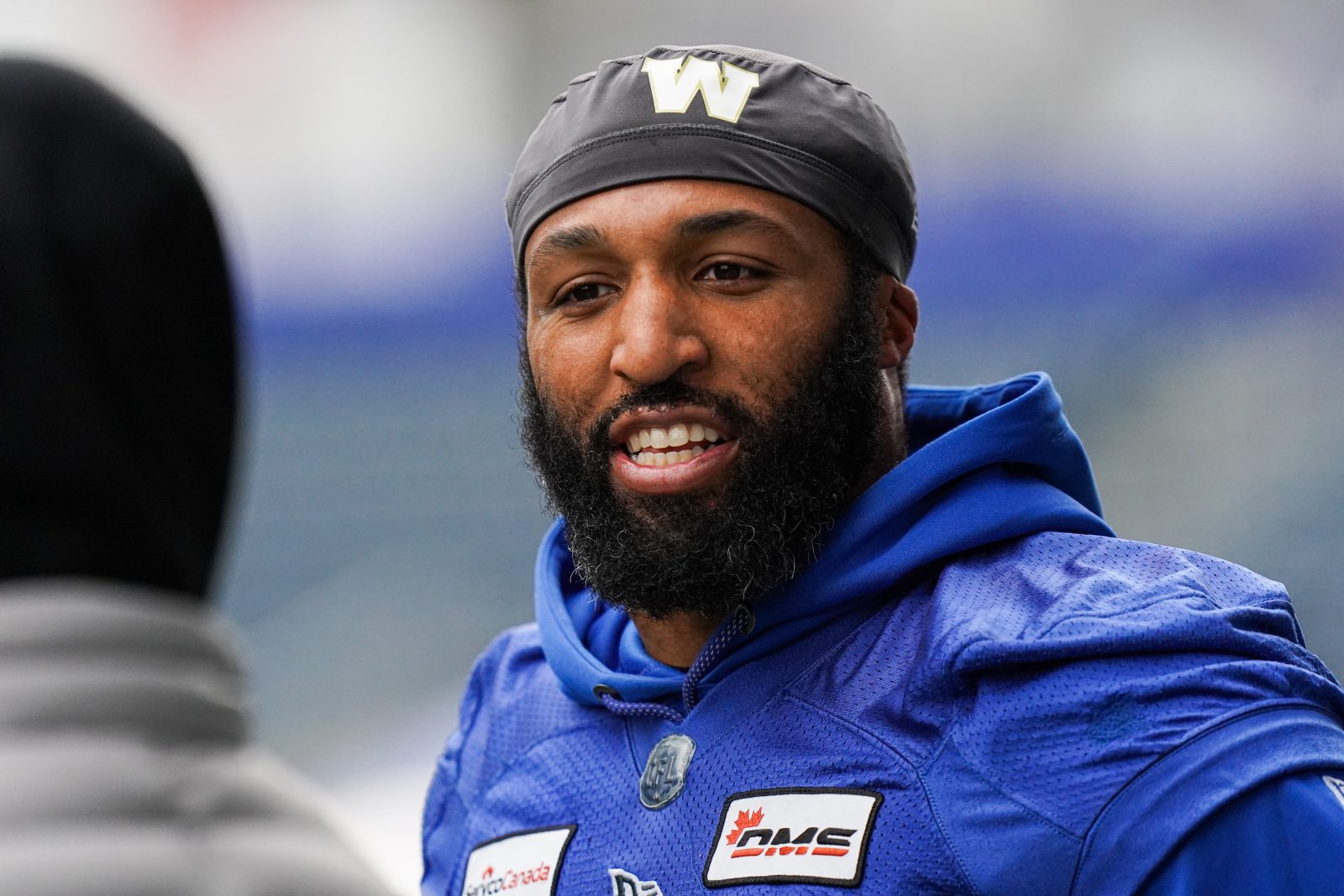 A look at the Blue Bombers results during their current 27-2 run at IG Field dating back to a loss in the 2018 Banjo Bowl: 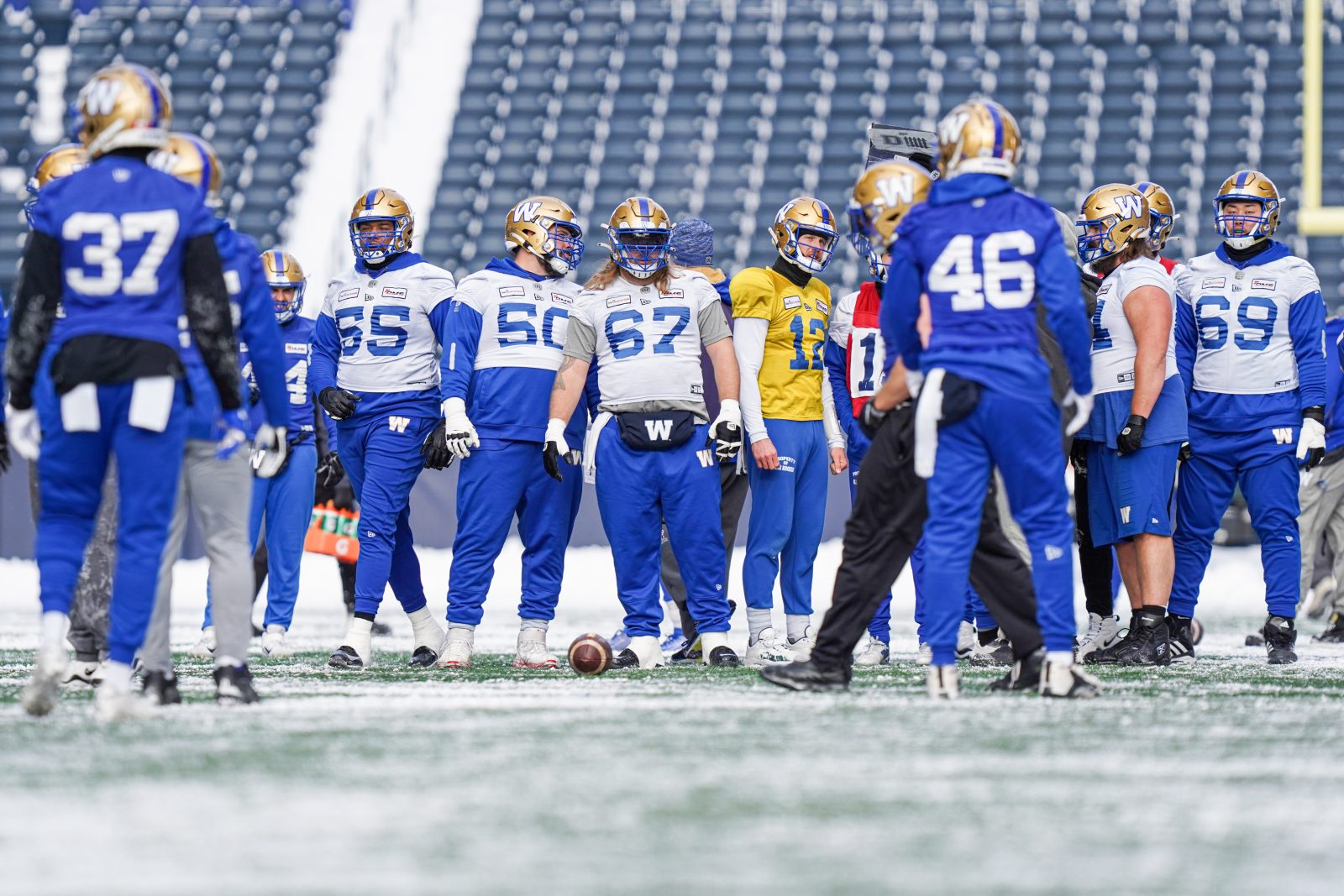 Blue Bombers head coach Mike O’Shea acknowledged Friday there are benefits to practising and preparing in the conditions we expect on Sunday – the forecast is calling for cloudy skies and a high of -5 – but wouldn’t acknowledge that it is any kind of advantage.

After all, the Lions may be a dome team, but they’ve practised all week outside and will have their walk-through session at IG Field on Saturday.

Still… those who have lived the conditions this week do believe you get hardened by the weather, even if it’s just a mental thing. It’s like readjusting to driving conditions after the first snow or remembering to layer up when the temperatures first start to drop in the fall. 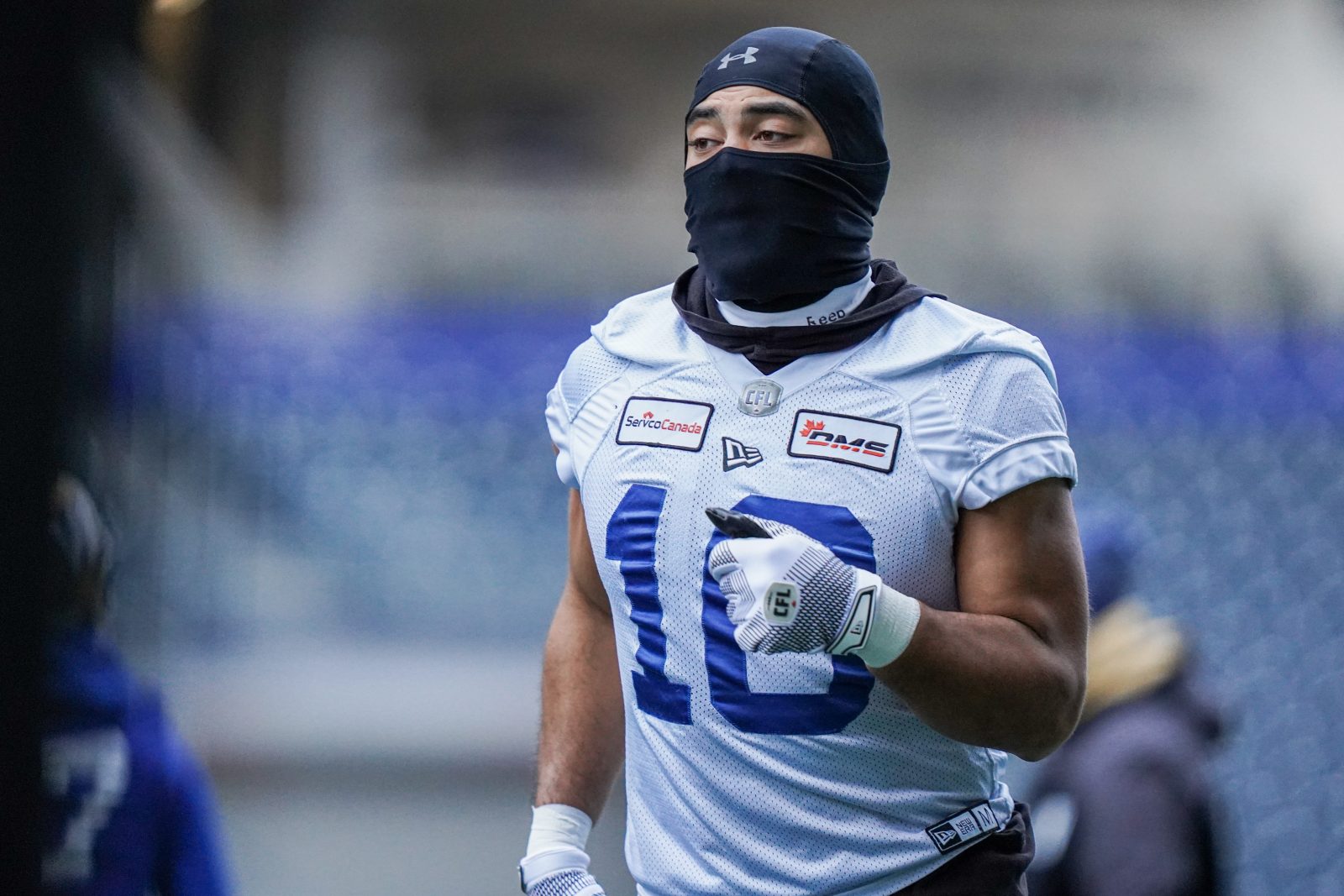 The Blue Bombers also have some recent experience to draw upon here, too. Last year’s Western Final was played on December 5th, if you recall, where the conditions were similar, but even colder. And the joint was absolutely jumping.

“The fans were having a fantastic time,” said O’Shea, when asked to look back to that day. “I mean, you stay focused, but in between, in the lulls of the game where there’s a stoppage or a commercial and you happen to look around and you hear everybody in the stadium singing… that’s pretty fun. And then (snaps fingers) you’re right back at it – the ref’s blowing it in, and you’ve got a play called and you’re listening and paying attention.

“(The fans) had a really good time and you’d like to see the same thing. You’d like to have our players give our fans what they deserve. They’re very supportive of us and we’d like to put on a good show for them and give them what they want.”

And what they want is simple: for the Blue Bombers to advance to a third straight Grey Cup championship next Sunday in Regina.

“Last year’s Western Final… driving to this thing you heard the fans on Chancellor Matheson,” said Hardrick. “You heard it coming down in the warmups. Usually in the warm-ups there’s a lot more empty seats but this thing was sold out in the warm-ups. It was negative-something and the fans brought it. They’re probably a big reason we won. We got down early in that game and they kept going all game. And we play for them.

“That was the best send-off – winning at home in front of your fans, knowing that you’re fighting for it all in front of your fans, that everything is for you. It’s on us to show up. It just means the world, man. Winnipeg… Manitoba… we feel that support… You get on social media and so many people thank you. I want to thank them.”

The Blue Bombes practised behind closed doors on Friday. Here is last injury report before the club releases its depth chat on Saturday:

Bet Regal has the Blue Bombers as 4.5-point favourites for Sunday’s Western Final against the Lions:

In those last two games the two teams were either resting players or without starters due to injury. Worth noting: Winnipeg is 7-1 in its last seven home games against B.C.