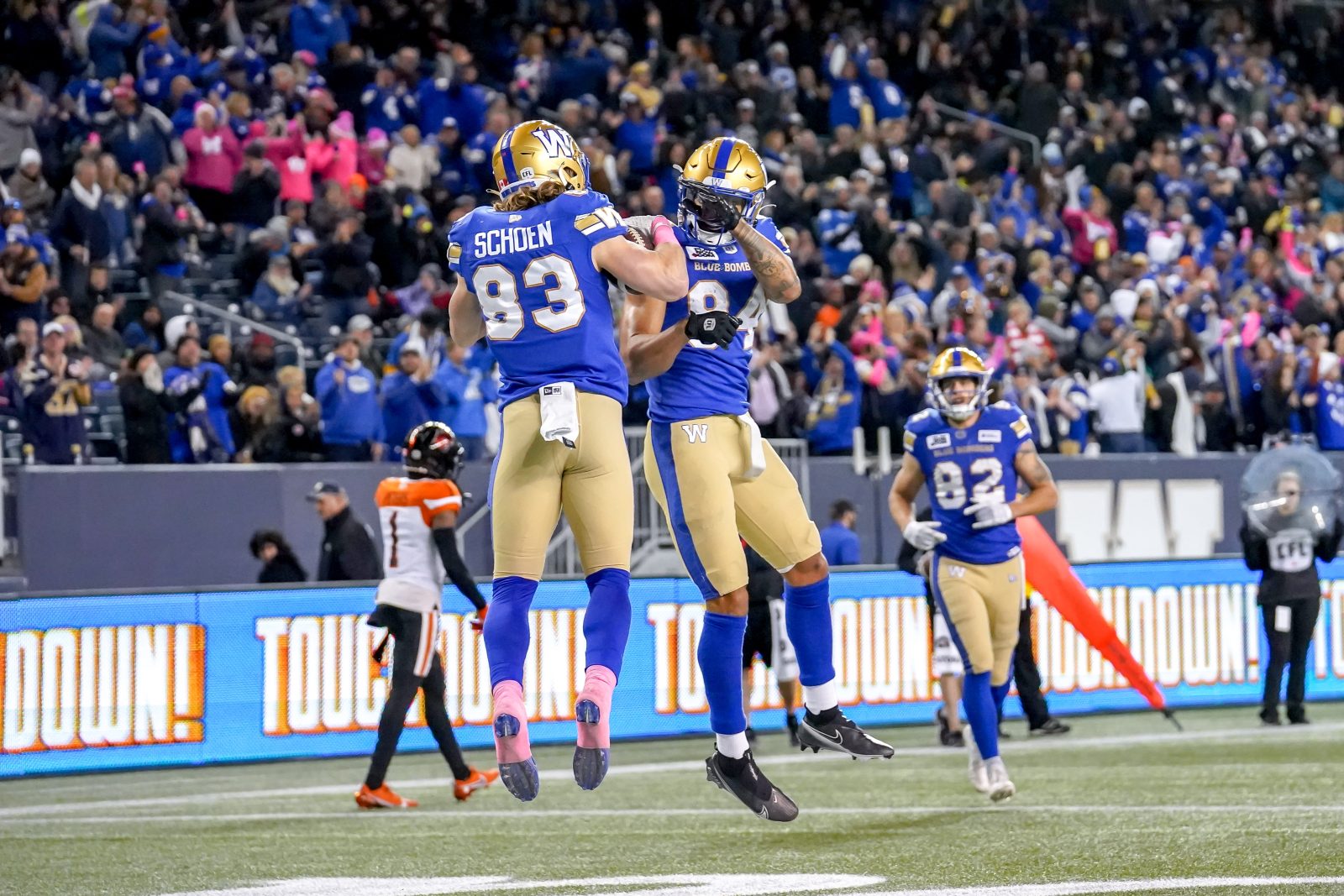 The Winnipeg Blue Bombers have delivered a strongly worded memo to the rest of the Canadian Football League, smack dab on the eve of the Grey Cup derby. Not that anyone across the three-down map really needed a reminder.

The two-time defending champs flexed their muscles in a solid 24-9 win over the B.C. Lions in front of 23,685 at IG Field Friday night in their regular season finale and, in the process, also made franchise history. By finishing 15-3 the Blue Bombers established a record for wins in a single season, eclipsing the 14-win seasons in 1960, 1993 and 2001.

“It hasn’t come up yet. It probably won’t come up,” said quarterback Zach Collaros on hitting the 15-win mark. “We have a lot in front of us, obviously, that we still need to accomplish. This is when the real fun starts. It’s something we’ll reflect on, I’m guessing, after the season.”

Most importantly, the Blue Bombers rested those that needed to take a knee and got the work in they needed for others before the Western Final – right back in south Winnipeg on November 13th against either the Lions or Calgary Stampeders, who meet next week in Vancouver – while unofficially escaping without a serious rash of injuries, although defensive back Redha Kramdi did limp off the field in the second half.

“It adds up like this, but whatever our record would be I wouldn’t say that we’re any less of a football team if we had a few more losses. We’ve got a good football team; this is just the way it added up this year.” 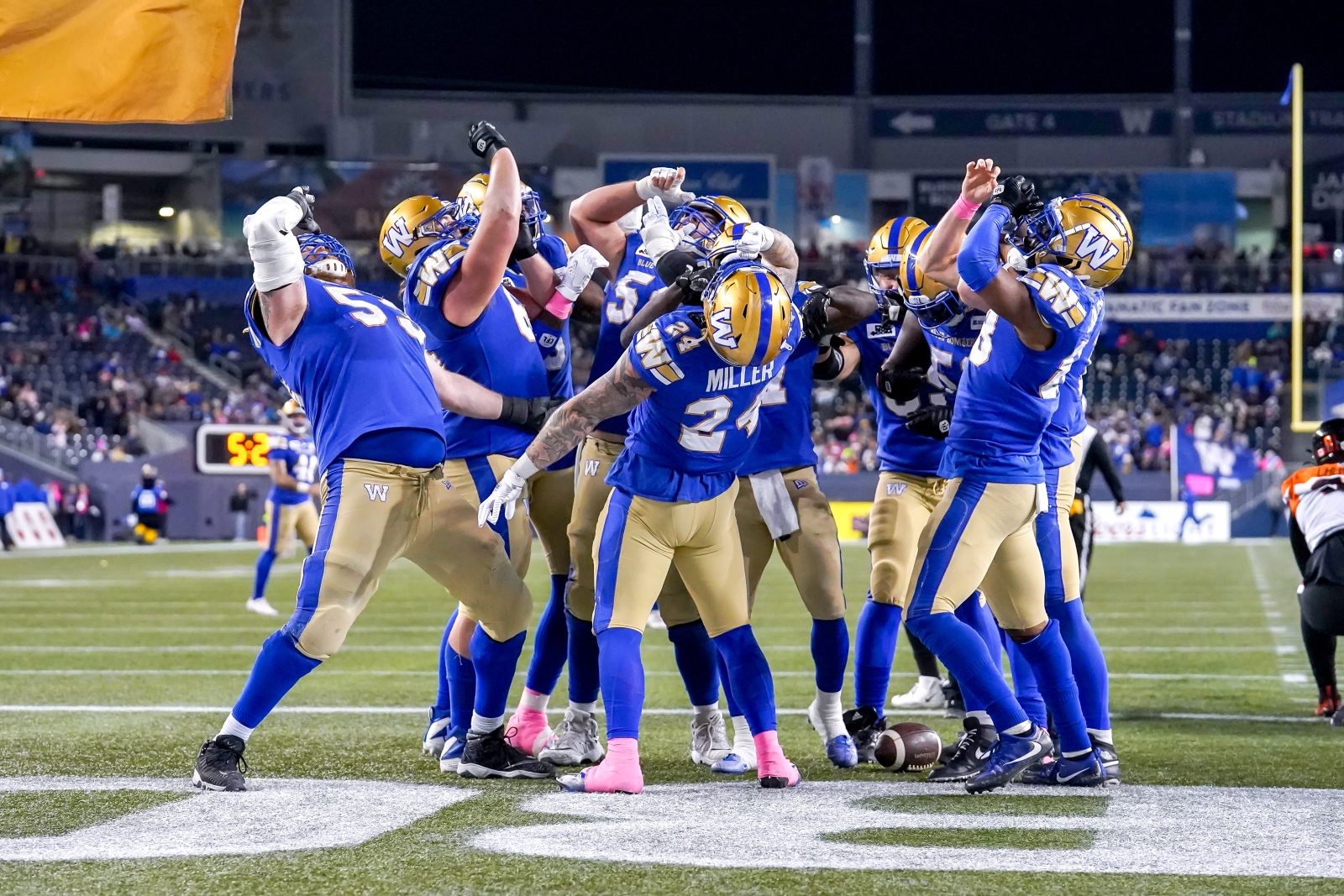 Among the other notable developments Friday that led to the franchise-record 15th win:

1. Collaros played the first quarter and in his two drives, threw for two touchdowns – the first to Dalton Schoen with the second to Rasheed Bailey – while completing 4-of-5 passes for 68 yards. The two TD tosses gave him 37 on the year – building on his career high and now the second-highest single-season total in club history, behind only the 46 Khari Jones had in 2002.

“I thought we executed pretty efficiently there,” Collaros said. “We were able to put the ball into the end zone and Osh came over to me and said, ‘Do you feel good? Have you seen everything?’ I said, ‘Yeah’ and he said, ‘We’re going to take you out’ and that was pretty much the end of the discussion.

“I’m happy with our performance in the first quarter and I thought guys battled all night long. I just thought we were really physical tonight. Offensively, defensively and special teams… everybody out there was really hitting and playing fast so that was encouraging.”

2. Brady Oliveira rumbled for 72 yards on just nine carries, with those totals pushing him over the 1,000-yard mark for the first time in his young career. Oliveira finished with 1,001 yards, becoming the fourth Canadian to crack the 1K mark over the past decade along with Andrew Harris, Jerome Messam and Jon Cornish.

“I’m a proud Canadian, I’m a proud Winnipegger, I’m a proud Manitoban,” said Oliveira. “The fact that I was able to accomplish that with my teammates, with my offensive line, is a great honour.

“But we’re not done yet. We’ve got a lot more work to do. But being Canadian and being able to get that is definitely huge.” 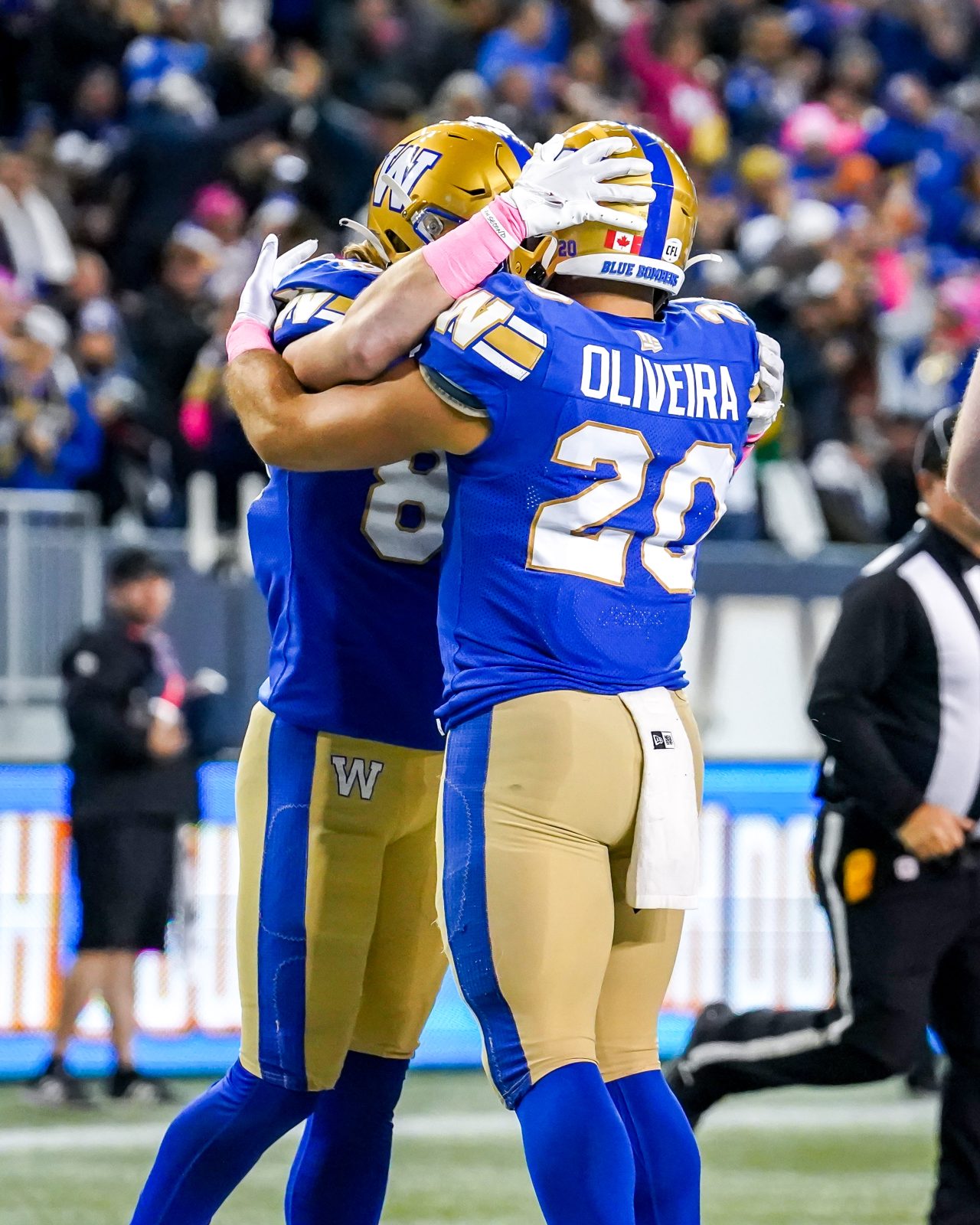 3. Schoen finished with two catches for 84 yards and his league-leading 16th touchdown. The CFL’s slam dunk Most Outstanding Rookie finished his first season with 70 catches for 1,441 yards. That’s the second-most in CFL history behind the 1,530 Matt Clark had for the Lions in 1991 and is the most by a Blue Bombers rookie.

Yet Schoen, perhaps mirroring the response of the entire locker room, essentially stiff-armed all the praise for those numbers to the ground. The 15 wins, the 1K rusher – all that stuff – pales in significance to what happens next in the West Final.

“It’s been a good year,” said Schoen. “All those personal accolades that you’re talking about have never been important to me. That’s something that’s secondary. In hindsight that will be pretty cool, but on the forefront of my mind is how do I do my job to help this team be successful.

“(The 15 wins) is not something we necessarily think about in the moment – same thing as the personal accolades – we just want to go 1-0 every week, so no matter what we’ve done the week before, good or bad, it’s in the past. It’s on to the next game.”

The Blue Bombers had thrown some key punches early, jumping out to a 14-zip lead on their first two possessions. But they delivered the game’s KO in the third quarter when Dakota Prukop led a drive that covered 103-yards on 11 plays, capped by a one-yard TD run by Mike Miller – the second in his stellar career and first on offence – that put the home side up 24-6.

Wins by the Blue Bombers this season, a franchise best dating back to this team’s inception in 1930.

Offence: Zach Collaros, QB: Played just one quarter, but it was an impactful one with the two TDs and should have locked up the CFL’s MOP vote – even if it was somehow still in doubt.

Defence: Casey Sayles, DT: The Blue Bombers ‘Dark Side’ D brought it on Friday, and Sayles finished with four tackles, a forced fumble and a sack.

Special teams: Brian Cole, LB: A shout-out to all the foot soldiers on special teams, especially those on the kick-cover units. Cole had three tackles on specials – Redha Kramdi and Nick Hallett had two each – as the Bombers did a solid job in controlling the Lions return game.

NEXT: The Blue Bombers will await the winner of the Western Semi-final next Sunday and will be at home for the Western Final at IG Field on November 13th.