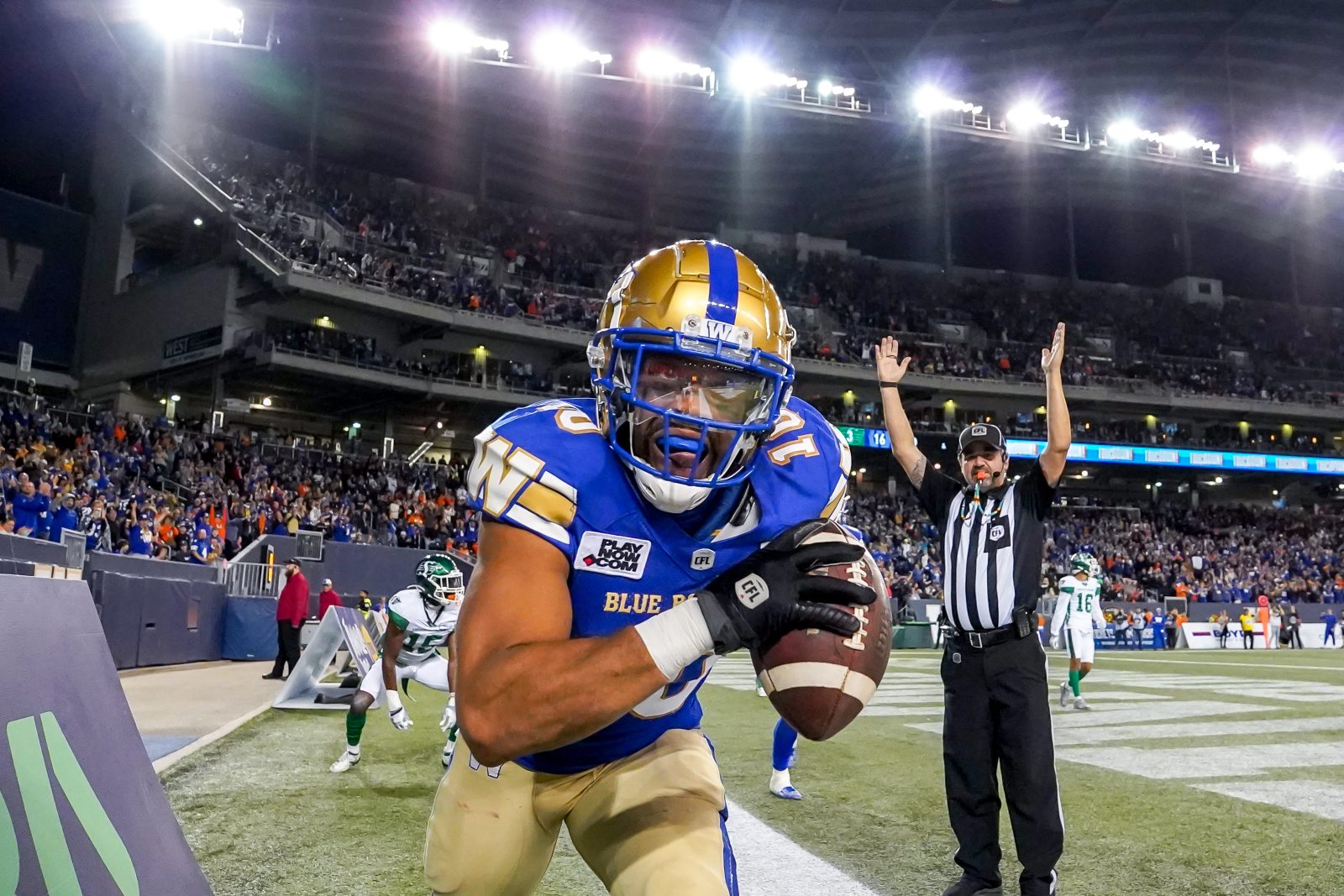 It’s a script the Winnipeg Blue Bombers have authored many, many times before over the past few seasons. And, quite clearly, it’s a storyline that just simply never gets old in these parts.

The Blue Bombers brought the hammer down with authority when it really mattered Friday night, nailing down a 31-13 victory over the Saskatchewan Roughriders while once again flashing their championship pedigree. The result, coming in front of a sold-out IG Field crowd of 33,234, not only improves the club to 13-2, but guarantees a home playoff game in south Winnipeg in November.

“It’s awesome. The support we get here in Winnipeg is incredible,” said linebacker Adam Bighill. “The energy we’ve been able to bring back to the city and the pride is so much fun to see evolve.

“I just want to keep bringing that energy for the city, for the province. So many people are so hyped about what we’re doing right now and what we’ve done. It’s fun. And it’s fun that a lot of people want to be a part of it.”

The win had some familiar themes to it, which is undoubtedly a comfort to Bomber Nation after the 48-31 loss in Hamilton before the bye week that was so out of character. 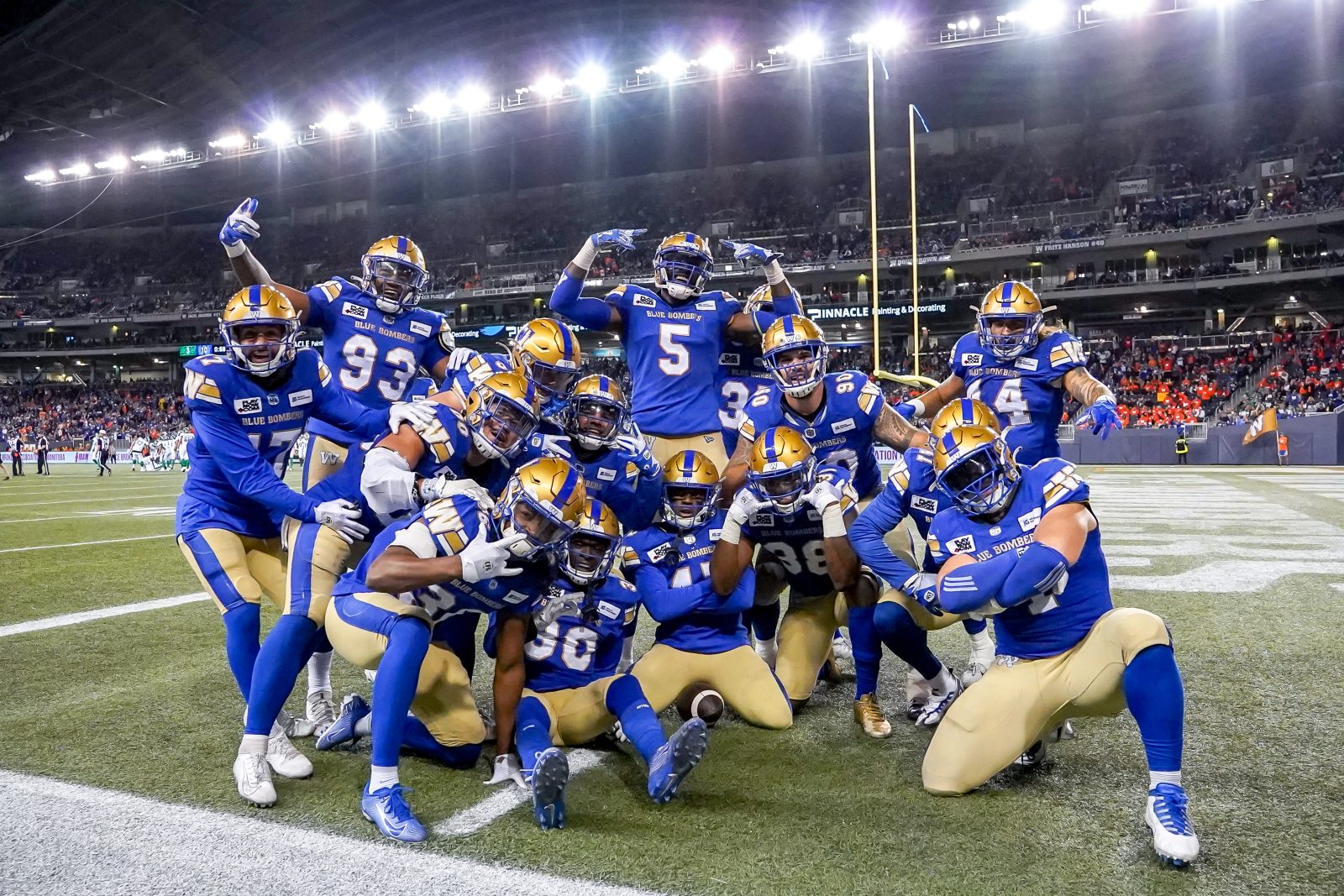 Leading 17-13 early in the fourth quarter – with the Riders having scored 10 unanswered points – the Blue Bombers scored twice in the final 12 minutes and 14 seconds while the Dark Side defence was at its absolute suffocating best.

“We just know what we’ve got to do, and all three phases play good football,” said slotback Nic Demski of the fourth-quarter push.

Zach Collaros threw for four touchdowns – two to Demski, who finished with five receptions for 94 yards and two touchdowns and added 21 more yards on three rushes, along with a 36-yarder to Rasheed Bailey and a 64-yard strike to Dalton Schoen.

The Blue Bombers cranked out 432 yards of net offence, including 136 along the ground and led by Brady Oliveira’s 101 yards on 15 carries. All of it, again, helped bury concerns about the loss in Hamilton and served as a therapeutic response by the Blue Bombers.

“You want to win every game you play,” said Collaros. “I think it’s important. Obviously, you don’t like to lose so everybody was disappointed. If somebody felt another way, then they shouldn’t be in the locker room. That’s just kinda how it is and I’m just happy we got a win tonight.” 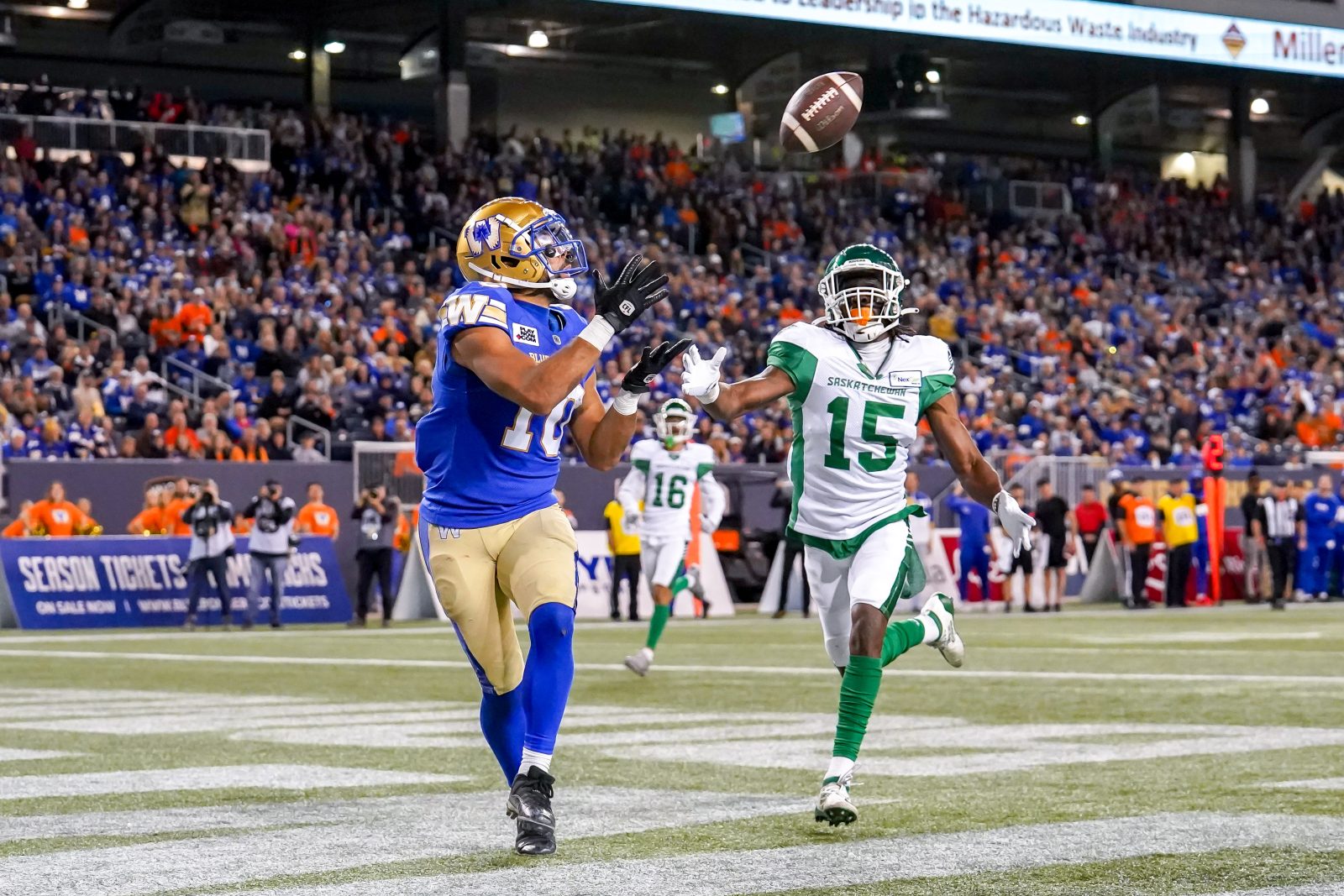 The Blue Bombers were dormant offensively in the third quarter, managing just eight yards in three possessions. But the club came to life in the fourth quarter, outscoring the Riders 14-3 in the final 12 minutes and 14 seconds

Critical in that was a Collaros-to-Demski 42-yard strike immediately after a Brett Lauther field goal had trimmed the home side’s lead to 17-13. That score put the Blue Bombers up 24-13 and seemed to squeeze the life out of the Riders.

The Blue Bombers forced six turnovers: one fumble, two interceptions and three times on downs – including two short-yardage stops – in finishing the turnover ratio at +5.

Offence: Nic Demski, SB: Hard not to salute Collaros, who had four TD passes, but Demski scored a TD for the fifth straight game. He now has seven touchdowns over that span and nine overall – a career best.

Defence: Evan Holm and Jamal Parker, DBs: The two rookies were superb Friday night, each intercepting a pass – the first for both – while Holm led the club with seven tackles and Parker finishing with six.

Special teams: Marc Lieggho, K: His punting was exceptional and he connected on a 22-yard field goal to extend his consecutive streak to nine. 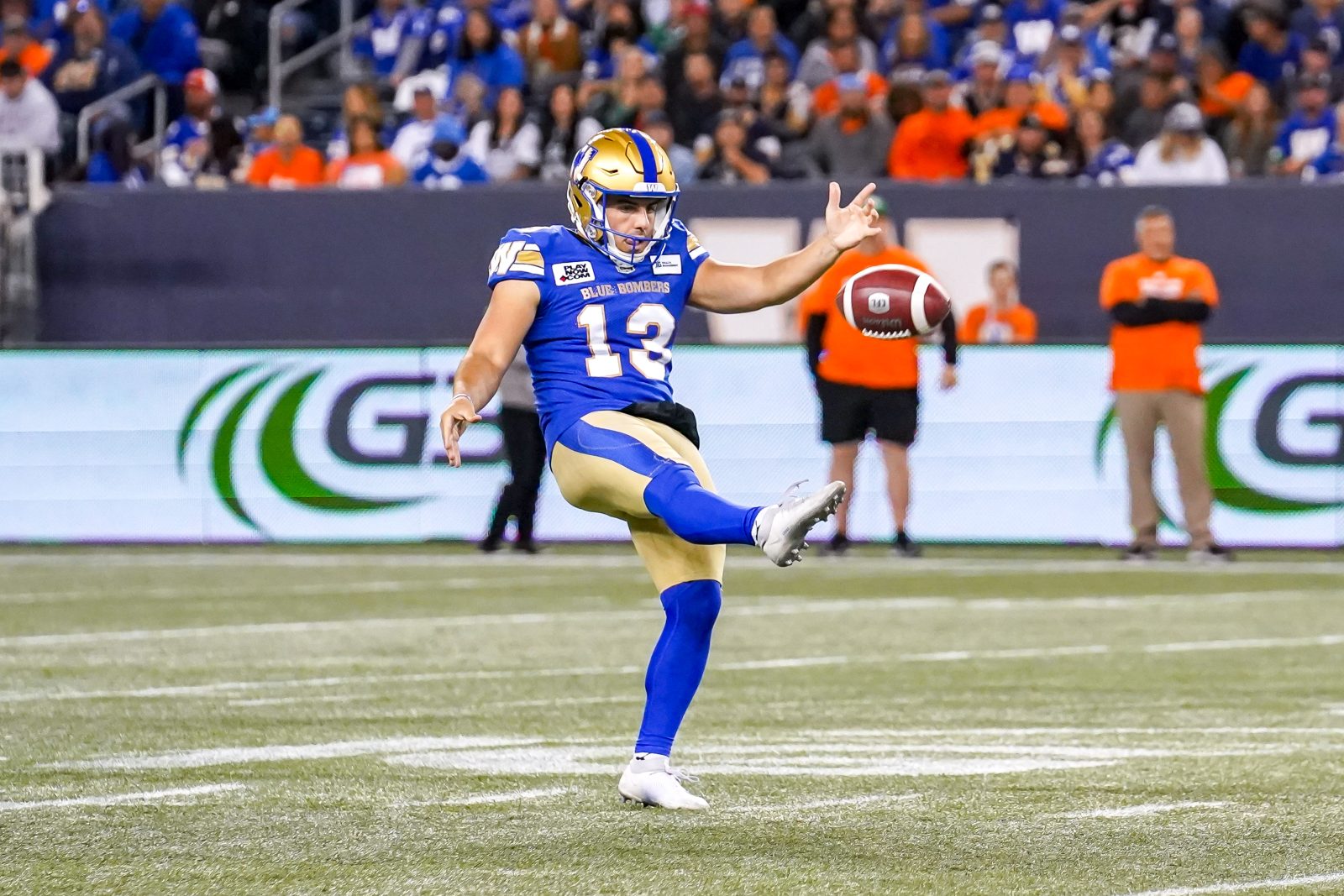 The win was Winnipeg’s seventh straight against Saskatchewan – five in the regular season and Western Final wins in 2019 and 2021. The Blue Bombers are now 10-2 in their last 12 vs their Prairie rivals.

Schoen’s TD gave him 11 this season, establishing a new record by a Blue Bombers rookie receiver.

NEXT: The Blue Bombers are home again next weekend, with the Edmonton Elks in town on Saturday, October 8th with a 6 p.m. kickoff.