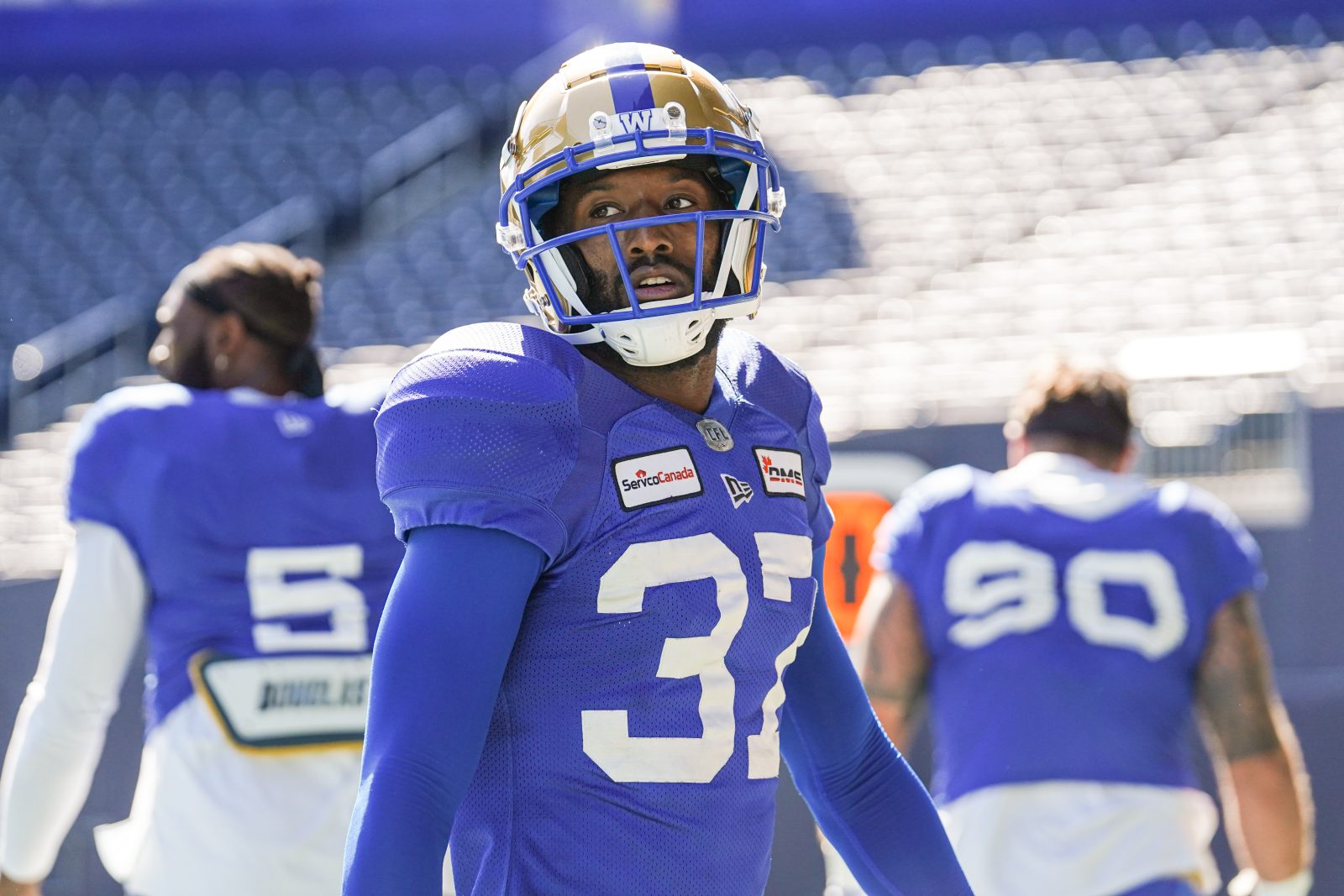 Brandon Alexander was a little out of breath when he first stepped in front of a media throng Tuesday, and the sweat dripping from his forehead seemed to be flowing as continuously as a leaky faucet.

And, oh yeah, the size-large smile on the Winnipeg Blue Bombers all-star safety’s face was as bright as IG Field on game night.

Alexander completion of an all-out practice session with the Blue Bombers – plus an extra half hour getting work in with Adam Bighill – was arguably the biggest news as the club returned to work following last weekend’s Banjo Bowl victory over the Saskatchewan Roughriders.

Missing since being injured in last December’s Grey Cup, Alexander might be green-lighted to return as soon as this Saturday’s game in Hamilton against the Tiger-Cats.

“We’ll see. We’ll definitely see,” Alexander began. “I’m excited. I really just excited to be back out there with them (his teammates) again. I’m just glad to finish the day.”

Alexander’s long road of rehab is well documented here but with that clearly in the rear-view mirror now the veteran safety clearly has his eyes on the road ahead. 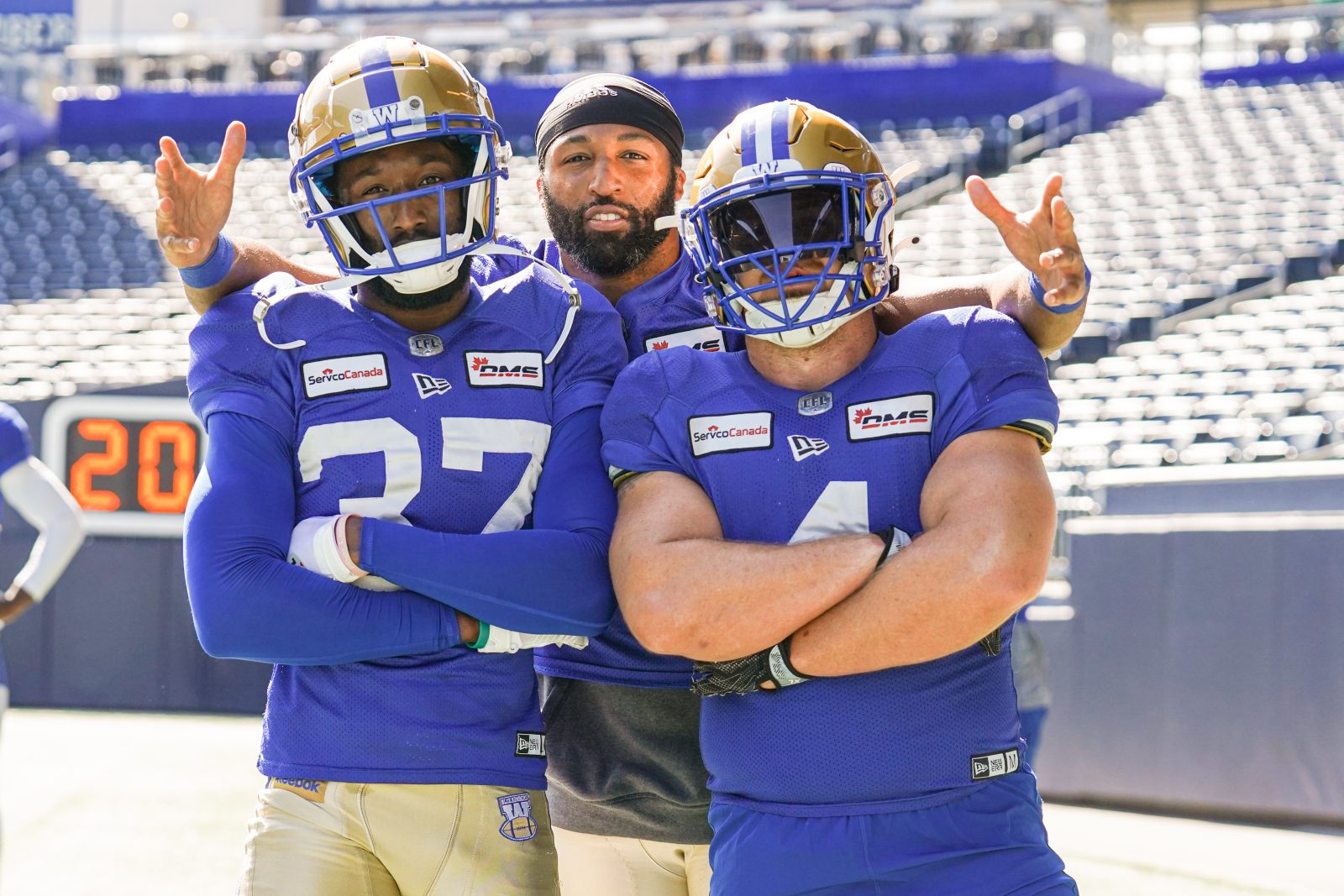 “Anything that’s worth it is going to be hard,” he said. “Of course, it was long, and it was hard but, to be honest with you, it kind of flew by pretty fast. What really made it fly by was all the guys encouraging and doing all those things and me just wanting to be back there.”

Several times during his almost eight-minute session with the media Alexander went out of his way to thank Al Couture, the Blue Bombers Head Athletic Therapist and Assistant Athletic Therapist Olivia Orman, his girlfriend Jessica as well as many of his teammates.

“Everybody would call me,” Alexander. “I could literally name every single player out here. If you want me to, I could do it. Every guy, whether they would call, whether they would show up, whether they came up here early… everybody just showed love. I’m just appreciative.”
Alexander said during the offseason he suffered some sort of injury early in the Grey Cup win over Hamilton. And when asked if he had been told by doctors afterward that his decision to keep playing may have worsened the injury, he offered up an answer that speaks volumes of his leadership and his commitment.

“I don’t even know. To be honest with you, though, I don’t even care,” he said. “It’s the Grey Cup and why would I come out unless I’m crawling off the field? Felt fine to me.

“I’ll take the Grey Cup every time. So, it happens and if it requires me to do that again in order for that to happen, I’ll do that again.” 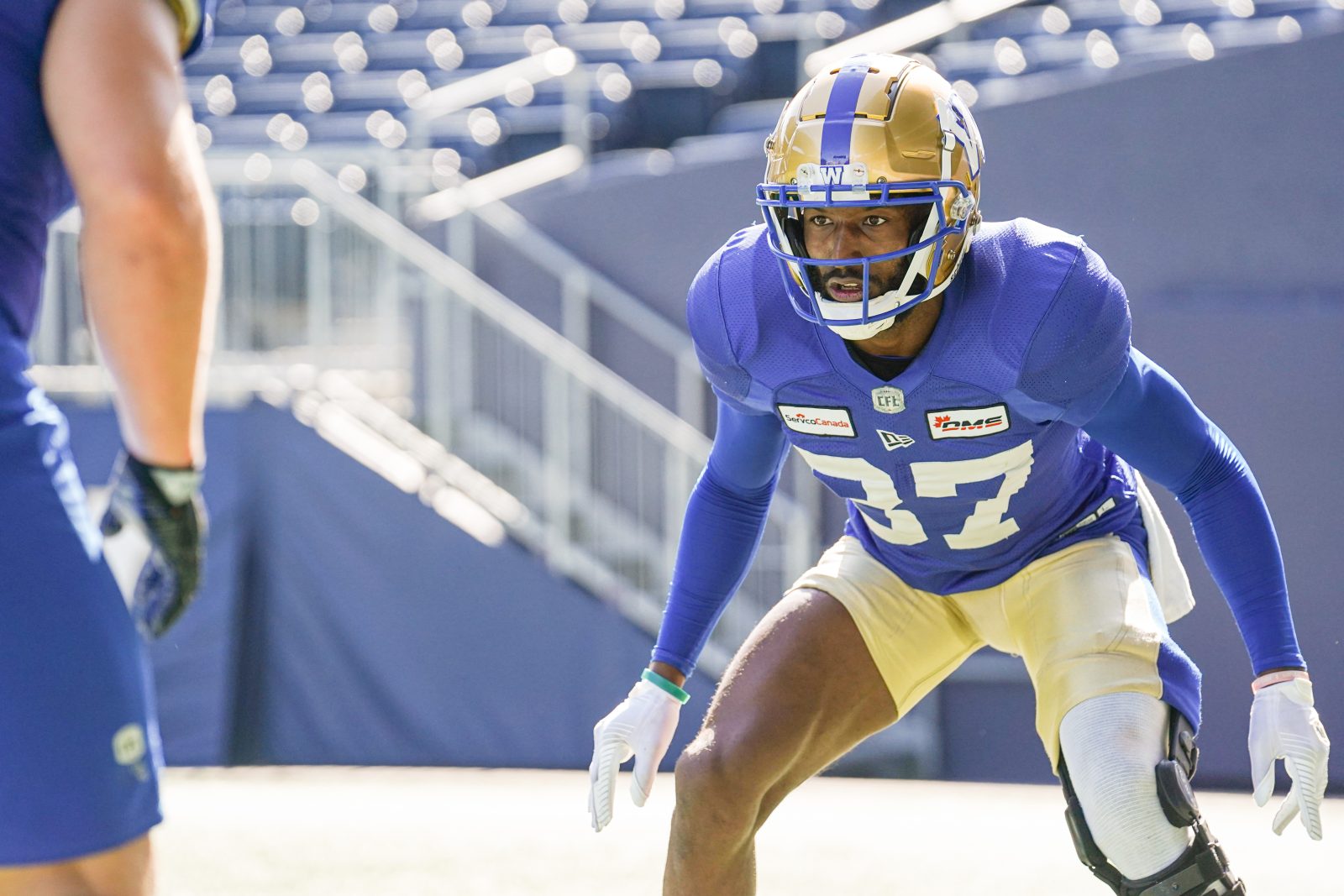 Alexander said his appreciation for the game during his recovery has grown immensely over the last few months and likened his excitement for his return to last season when the entire league returned to work after missing the 2020 season due to the COVID-19 pandemic.

Alexander’s potential return could be massive for a secondary already missing Demerio Houston and now without Nick Taylor, who it was confirmed with Tuesday’s injury report suffered an Achilles injury on the weekend.

“I’m just excited for him. I just love that guy. He means a lot to our team,” said quarterback Zach Collaros. “Obviously on the field he means a lot, but just as a leader and his presence lifting everyone up around him…. I can’t say enough good things about him. I’m sure everyone would have the same comment.

“He’s just a great person and an unbelievable football player. We’re excited to have him back.” 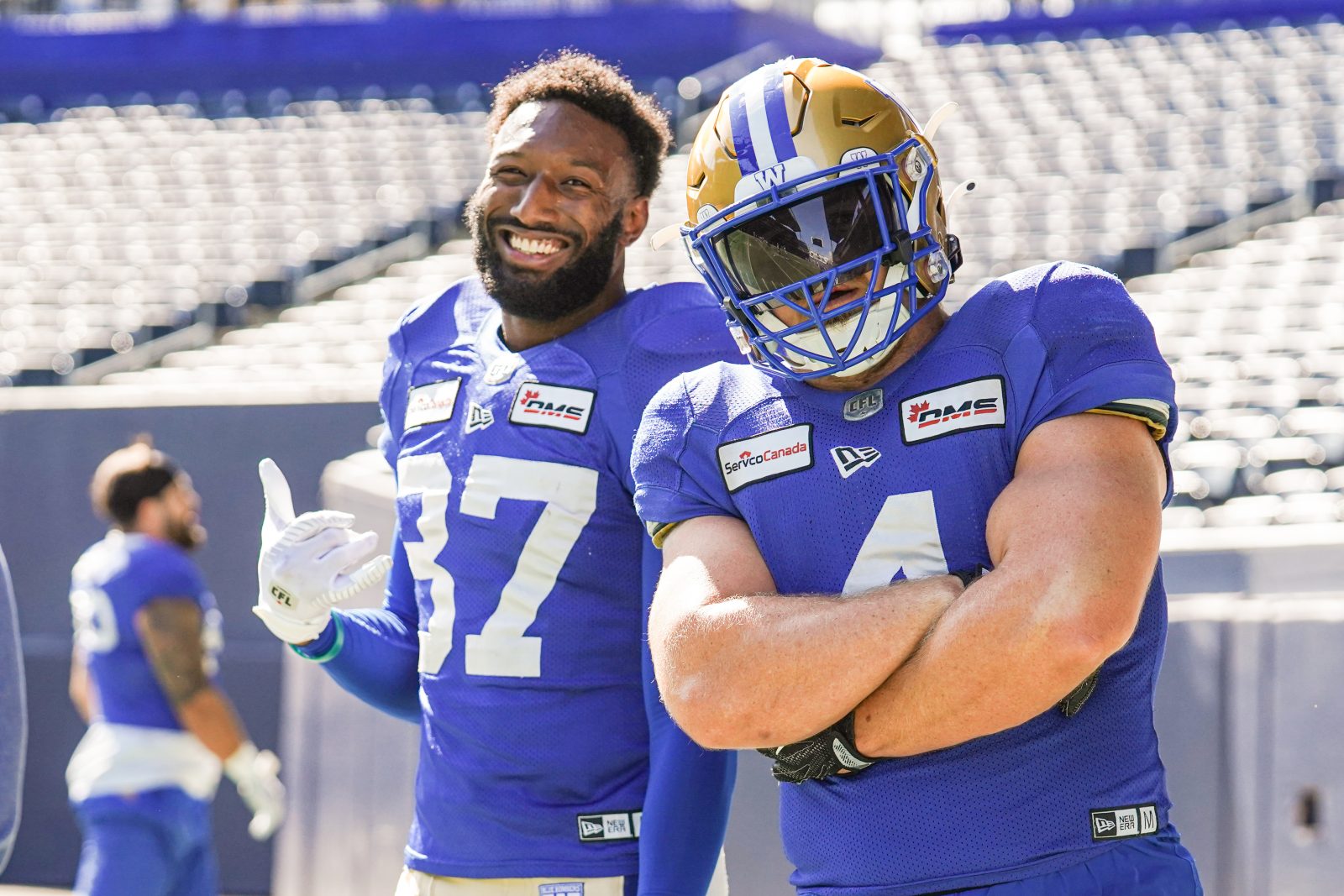 More on the injury front based on Tuesday’s practice – WR Drew Wolitarsky was present but sporting a knee brace and not participating. Brendan O’Leary-Orange finished Saturday’s game in his place and was working with the starters at practice. Evan Holm, it’s worth noting, was working in Taylor’s spot at halfback.

Michael Couture was getting a ton of work at centre and safety Malcolm Thompson was also back practising. LT Stanley Bryant did not practice – head coach Mike O’Shea said it was a ‘maintenance day’ – with Geoff Gray sliding out to tackle and Liam Dobson moving into guard.

The injury to Wolitarsky is the latest to a receiving corps still without Greg Ellingson and also having lost Carlton Agudosi, and which also missed Nic Demski for four games earlier in the season. 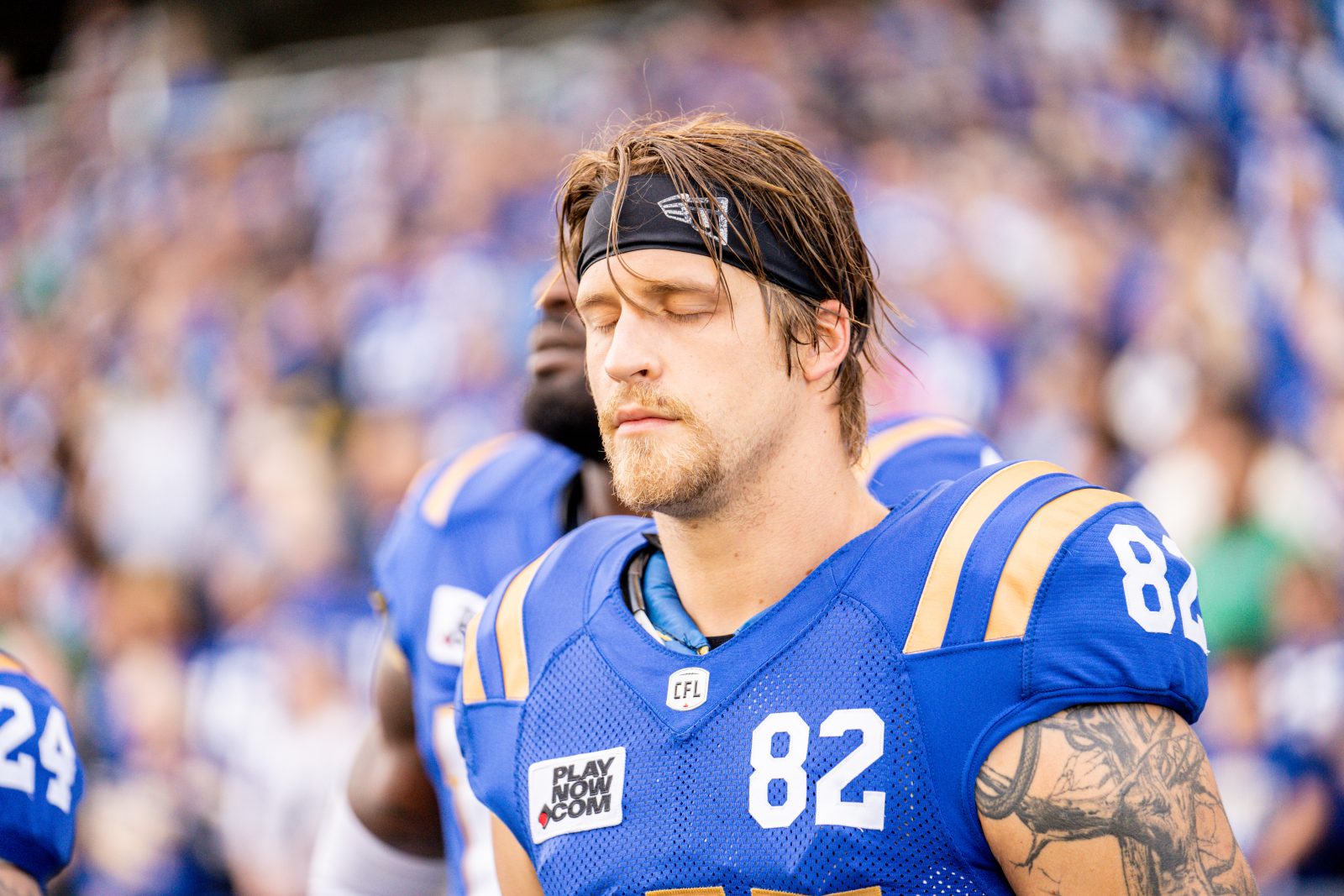 “It’s a long football season. It’s always tough seeing guys go down but it’s a long season and every team deals with it. You’ve just got to keep practising and getting better every day.”

Wolitarsky is having a sensational year, with 35 catches for 462 yards and one TD this year and has morphed into a reliable second-down converter for Collaros. He’s more than just what shows up in the numbers, too.

“He means a lot to this team,” Collaros said. “There’s many times where he gets up in front of the guys and speaks. Everybody listens to him. He’s always got a great message – a well thought out, eloquent message. On that end he’s always been great in the locker room, really great for that room.

“It’s weird not having him out here practising because he’s always the guy having fun, getting guys lined up… knows every spot, and over the last couple of years has become a security blanket for me. He can jump in at any position. You go back to last year’s Grey Cup… him moving around there with Nic being banged up and he made some big catches down the stretch. It’s been nice this year seeing his role expand a bit and drawing more things up for him. He’ll be back. I miss him.” 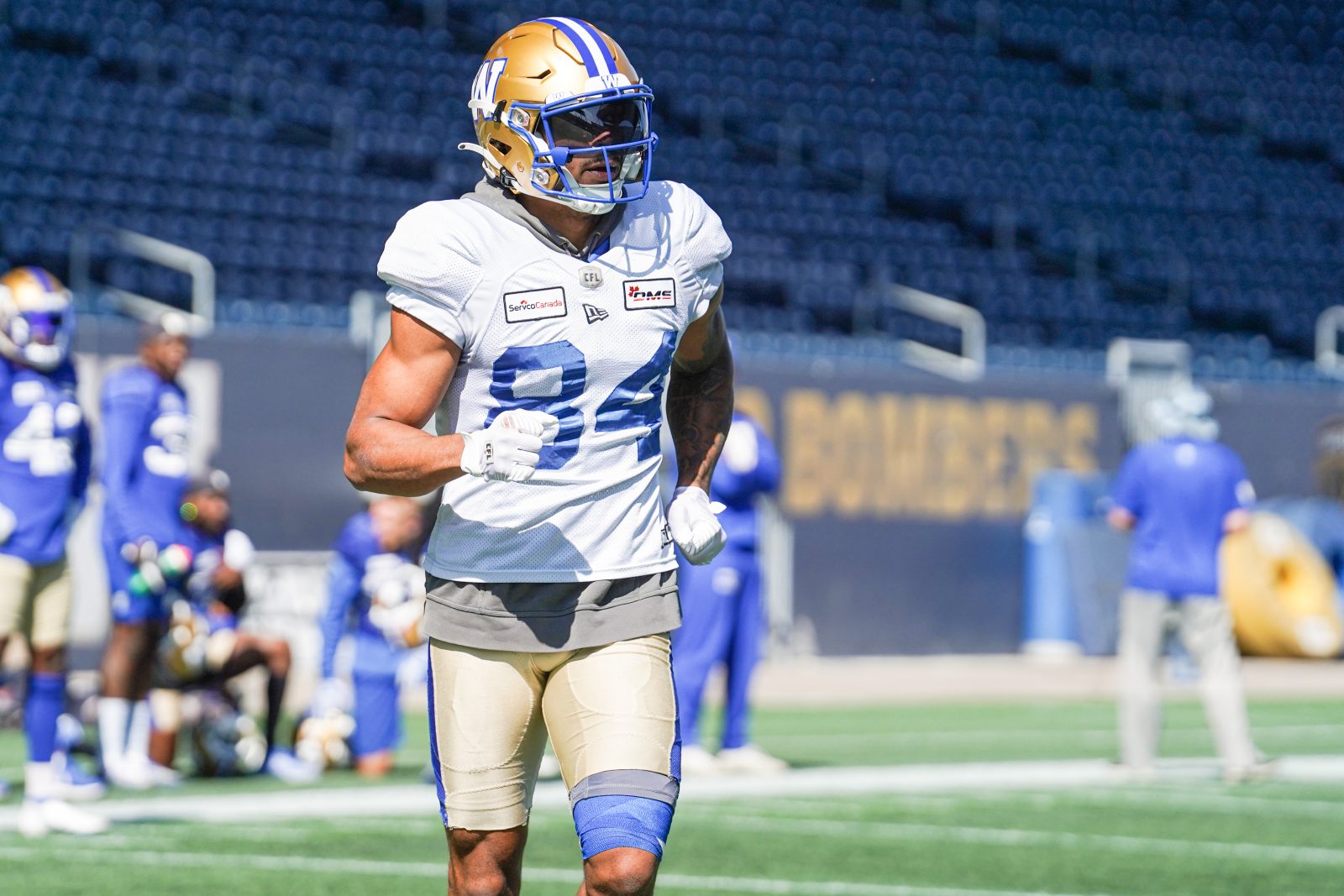 O’Leary-Orange caught his first professional TD in relief of Wolitarsky and said the football would be going to his mom.

“It was just a great moment to celebrate with your teammates,” said O’Leary-Orange. “You kind of get caught up with it and everything slows down.”

“I feel like we have a bunch of guys in that room who are always capable of stepping up and filling in that role,” he said on possibly replacing Wolitasky. “If my name is called upon for some reason, if Woli’s not ready to go, I’ll always be ready to go.”

Both Collaros and Willie Jefferson were named as CFL Top Performers for their work in the Banjo Bowl win.

Collaros completed 21 of 25 passes for 273 yards and four TDs, while Jefferson recorded two sacks, a forced fumble and three tackles.

As well, it was announced Tuesday that the 1990 Blue Bombers are part of the Manitoba Sports Hall of Fame induction class. To relive a bit about that Grey Cup championship side, click here.