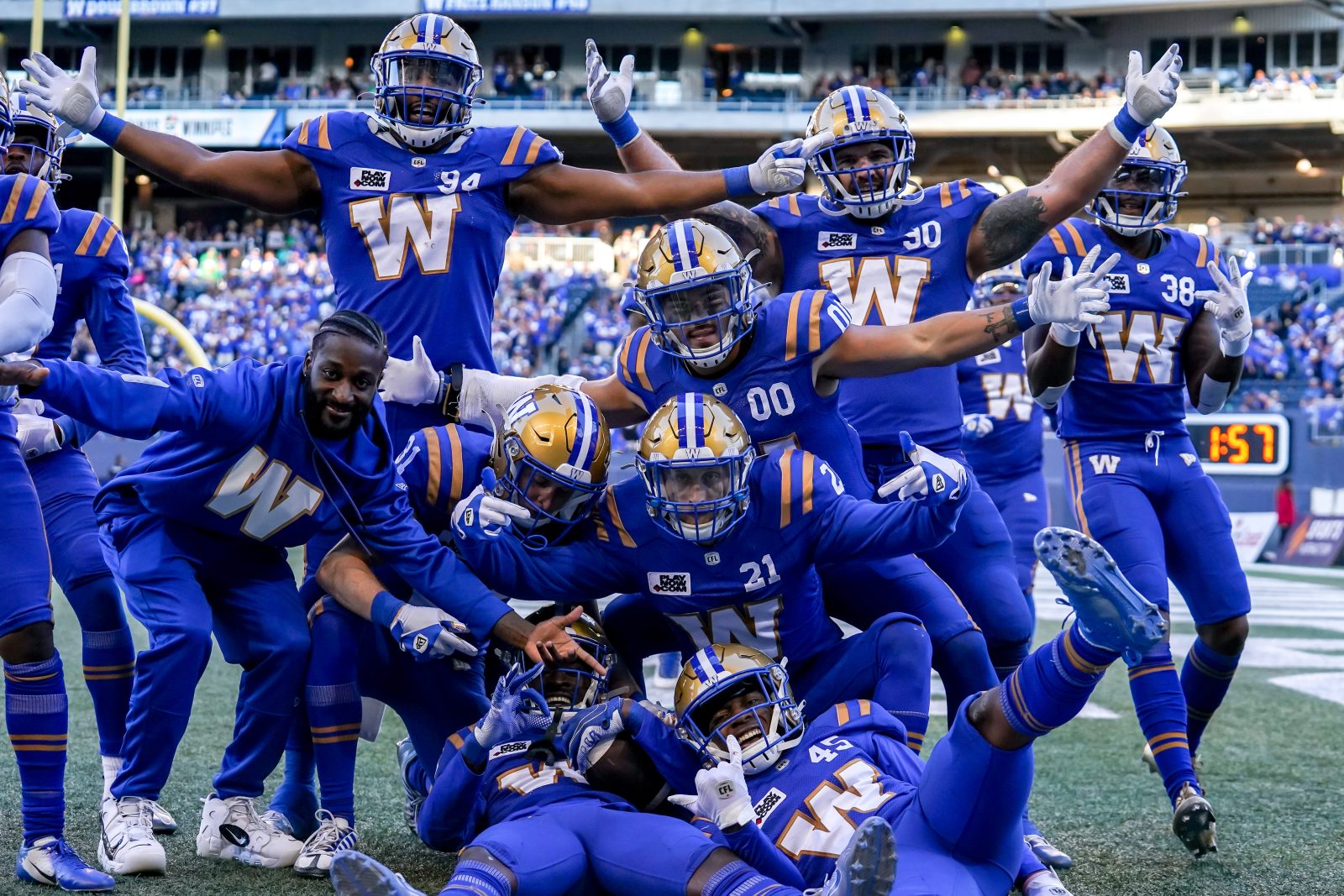 There have been few stops and detours, and no need to even consider touching the brake: the runaway train that is the Winnipeg Blue Bombers just keeps rollin’ along right through the Canadian Football League.

The Blue Bombers delivered a Banjo Bowl beauty with a 54-20 beat down of the Saskatchewan Roughriders in front of a sold-out crowd of 33,234 at IG Field Saturday and in the process improved their league-leading record to 12-1.

“Like I said at the beginning of the game to the guys, ‘Why not today?’” said defensive end Willie Jefferson. “We’re at home. We’ve got a perfect crowd. The atmosphere was amazing. We had a great week of preparation. Everyone was locked in, dialled in and ready to play.

Here’s what the Blue Bombers did in rolling to their 12th win in 13 tries: 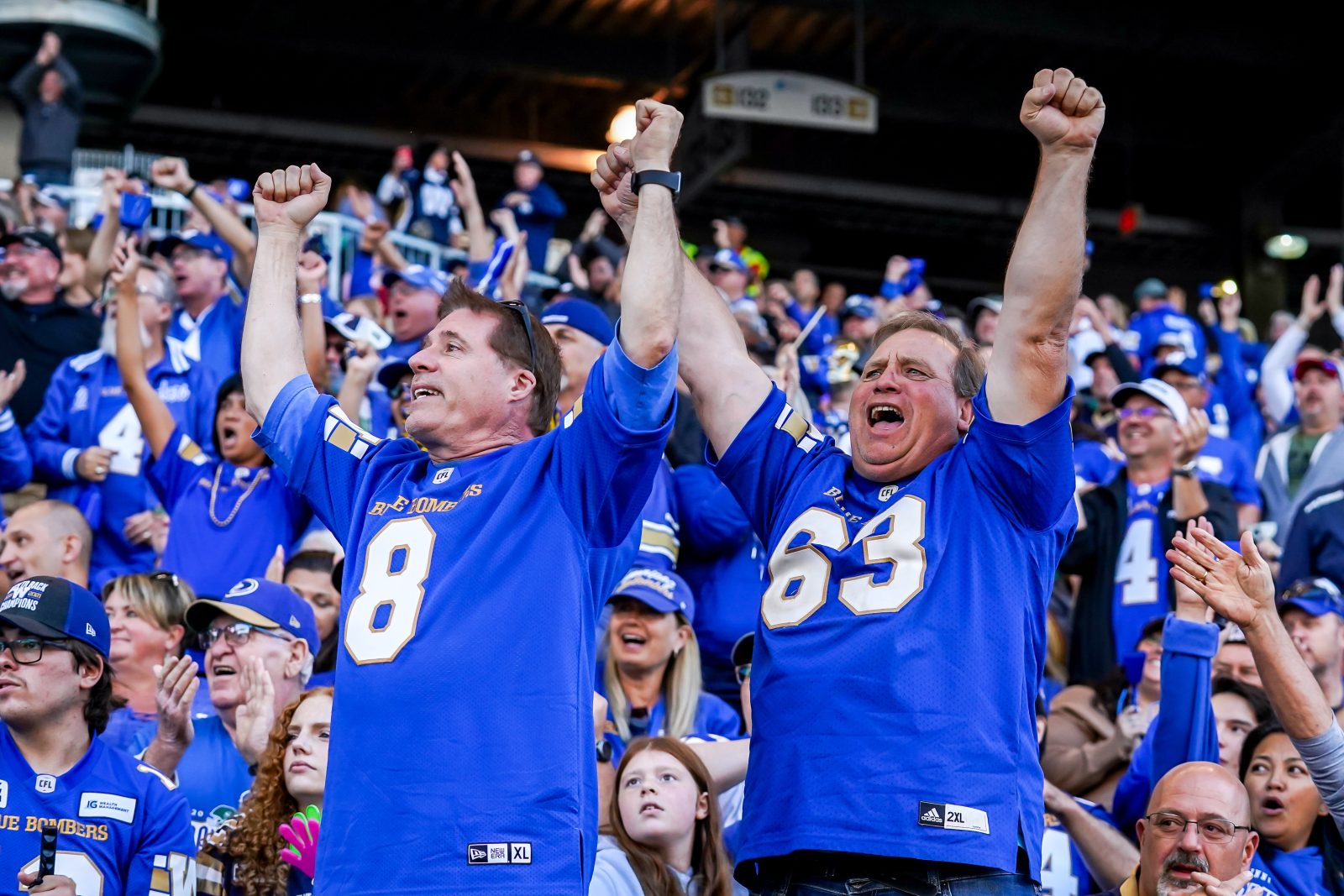 The only blemish – and this is surely nitpicking in a game in which the home team won by 34 points – were serious-looking injuries to defensive back Nick Taylor and receiver Drew Wolitarsky, and a kickoff return touchdown by Mario Alford to open the second half.

“It was a pretty good effort, that’s for sure,” said Blue Bombers head coach Mike O’Shea when asked if the win was the team’s most-complete effort of the season.

“We’re getting closer to that. I think we gave up 10 points in 40 seconds surrounding the half (a field goal on the final play of the first half and Alford’s return score to open the second half) that’s the only thing that maybe stops you from saying complete game.

“If we get a stop on that kickoff return then I’d say that was overall a damn good game.”

Then perhaps catching himself, O’Shea paused for a moment and added with a grin: “I mean, it still is a good game. Geez… we did well.”

Coming off a Labour Day Classic win in which the offence scored two touchdowns but lamented its first-down production while wishing to stay on the field more, the attack delivered on every single wish going into the rematch. 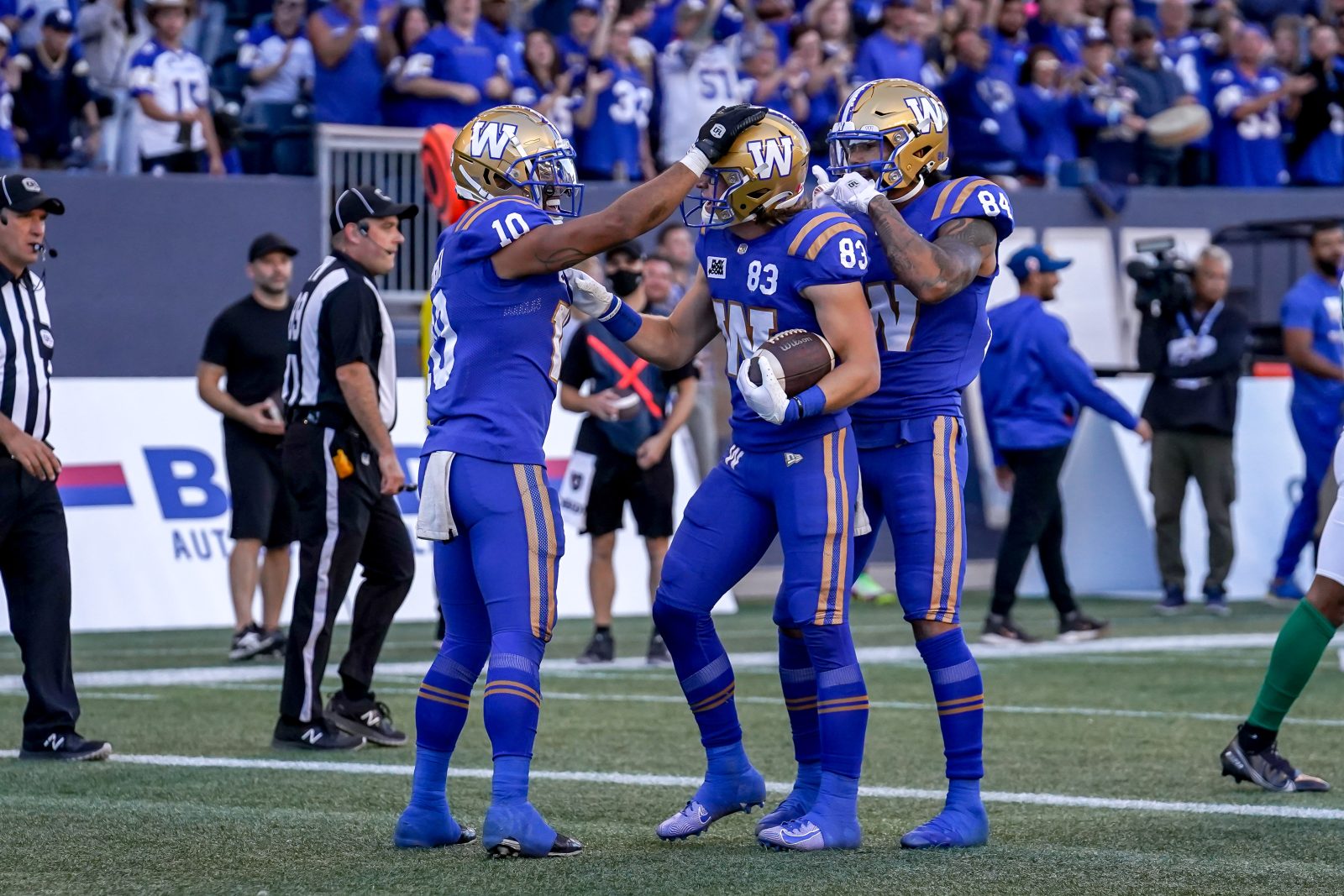 Marc Liegghio didn’t line up for his only put, it’s worth noting, until there were three minutes left in the game.

“That’s pretty crazy,” said Nick Demski. “I mean, I don’t even think I noticed it until the fourth quarter when I asked Dalton (Schoen), ‘Did we punt today?’ It’s just a great job by our whole offence to go out there and score that many points and to put that many drives together – and some of them were long drives, as well. It speaks volumes to the type of offence we have here.

“We knew what we wanted to do, and we had a pretty good grasp on what they were going to come out there and play. We didn’t good job game-planning and scheming and everybody was on the same page. They still played a good game, but we just took advantage of all the hole they gave us.”

Zach Collaros was sensational, completing 21 of 25 passes for 273 yards with four touchdowns – two to Demski with one each to Brendan O’Leary-Orange and Rasheed Bailey. Dru Brown came off the bench to deliver a TD strike to Schoen, while Dakota Prukop scored twice in short yardage runs.

“It’s special,” said Collaros of the offensive effort. “It was efficient. We were really good on first down (averaging 6.9 yards). Any time you can be that efficient on first down it’s going to make for longer drives and we’re able to wear them down.” 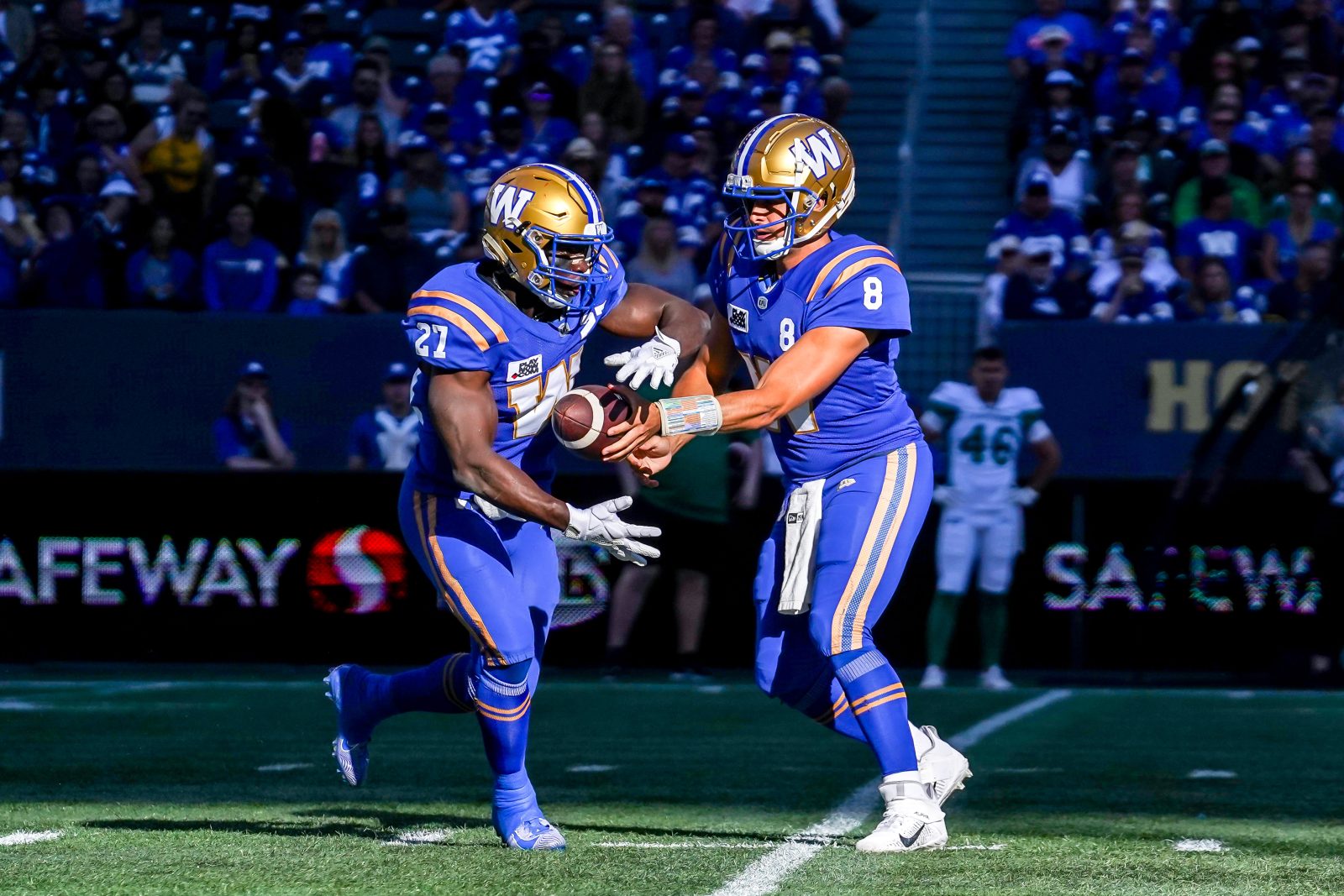 “Like Buck (Pierce, offensive coordinator) always says, you’re able to call more of your calls during the game. In the second half we were able to continue to lean on them. It was awesome.”

Playing a gritty Roughriders team that was battling stomach flu and was short-staffed, the offence wrapped their fingers around the throat of a depleted opponent early before the defence sealed the deal in the final 30 minutes.

“It was just us trying to go out there and put the nail in the coffin,” said Jefferson. “Second half when it comes to the defence we know if we can stop them and get them off the field and get Zach the ball as many times as possible, we know he’s going to try and put it in the end zone.

“… There’s no better spot to be in than at the top,” added Jefferson. “There’s always a target on our back. We know we’ve got to keep fighting and just keep trying to go 1-0. We are at the top, we’ve clinched the playoffs, but only dudes that care about that are you guys (media). We don’t care about that inside the building. We just want to come out and play Winnipeg football and go 1-0 every week.”

The Blue Bombers led 20-7 in the second quarter when Rasheed Bailey latched onto a Collaros pass on a crossing route, picked up some blocks from Schoen and O’Leary-Orange and then leaped toward the end zone, reaching the ball to graze the top of the pylon for a TD.

“I didn’t see the play until I was just on FaceTime with my mom and my little sister, and I watched it for the first time,” said Bailey. “I didn’t know I jumped that far. Man, I’m happy for that moment. God is real. I’ve been through a lot and to score that touchdown in that fashion in that end zone and that spot… I only score touchdowns in that spot. That’s crazy. In that end zone, in that corner… that is my spot. I should have took that pylon with me.

“Man, they were fired up. My mom said she was screaming at the TV. Everybody was all screaming. She was calling me ‘Superman.’”

Offence: Zach Collaros, QB: The CFL’s reigning MOP flexed on Saturday by eviscerating the Riders defence. He was 21 of 25 for 273 yards and four TDs as seven different Blue Bombers had receptions

The club is now 29-3 in games in which Collaros has started. 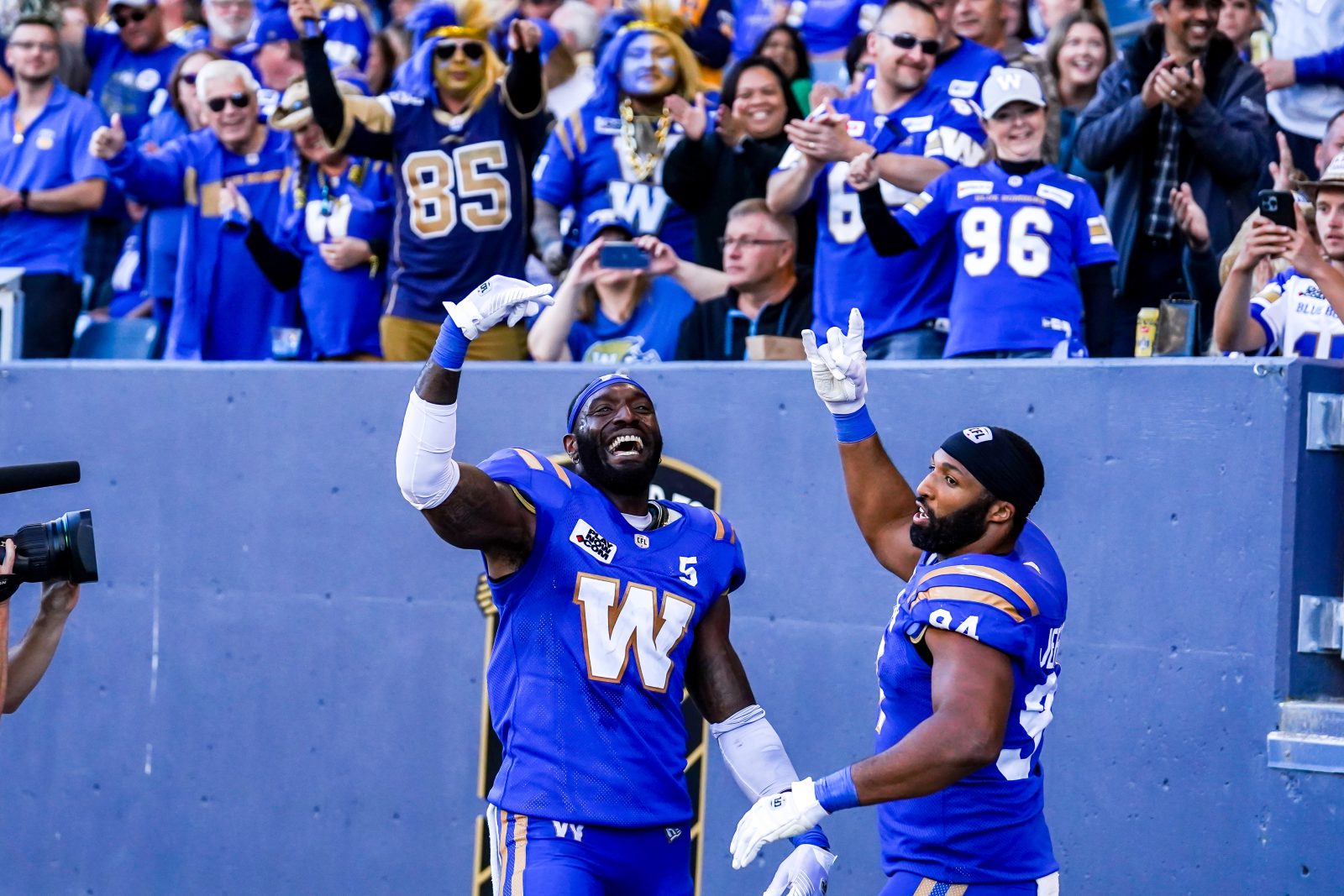 Zach Collaros now needs just 20 yards passing to move past Danny Barrett and into 25th place on the CFL’s all-time passing yardage list. Barrett finished his career at 23,419 yards; Collaros is at 23,400.

NEXT: The Blue Bombers are on the road next Saturday in Hamilton to face the Tiger-Cats at Tim Hortons Field. Kickoff is 3 p.m. CT.