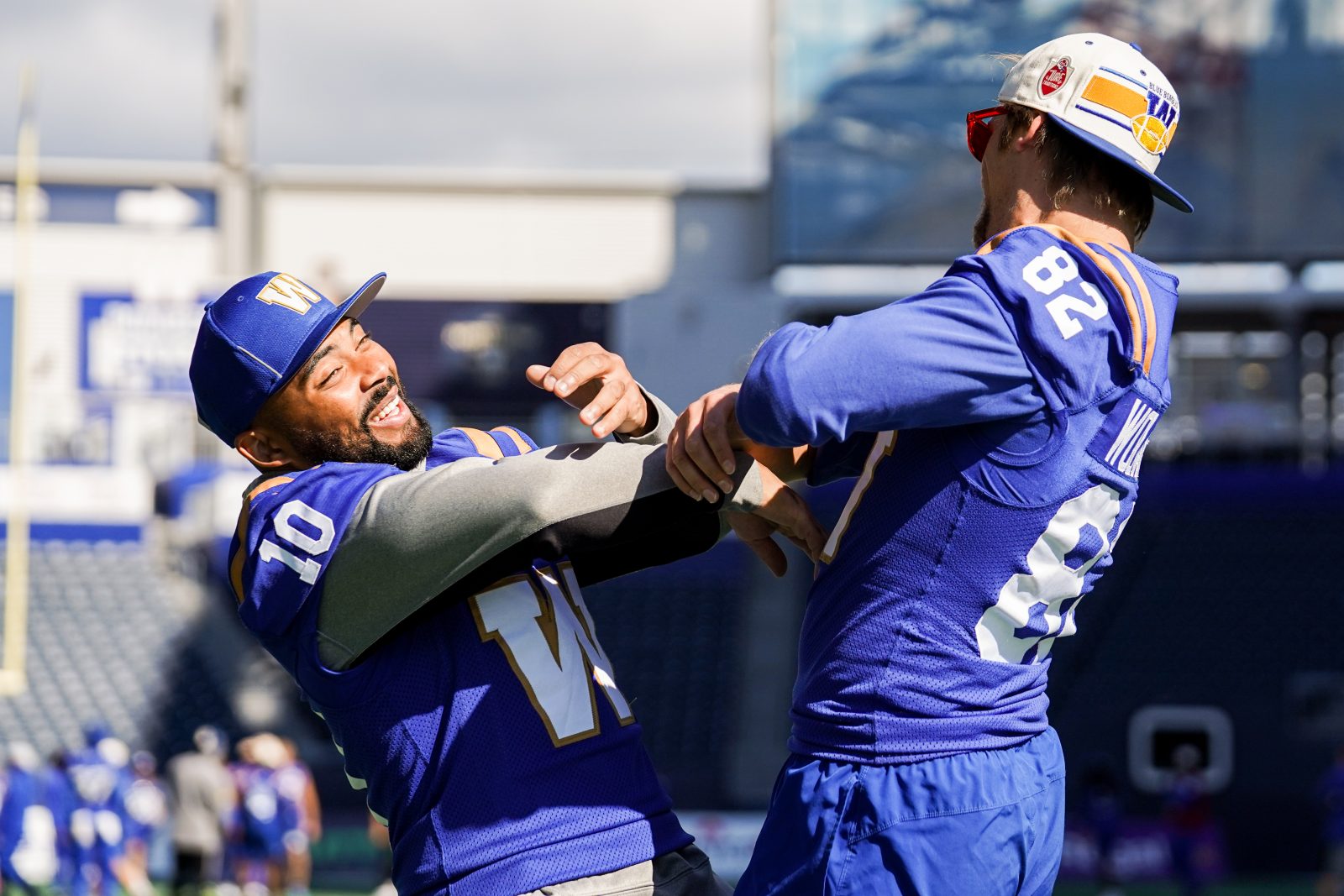 Nic Demski broke his first tackle in this town. Scored his first touchdown here, too.

He grew up wearing Charleswood Broncos purple, followed by the blue and silver of Oak Park High School and the brown and gold of the University of Manitoba.

Back in those days, as his legend grew and he became more and more recognized for his skill, Demski could only fantasize of playing in the Labour Day Classic and the Banjo Bowl. And now, well, here he is doing just that.

“It really is like a dream for me, doing this,” Demski said this week. “Growing up I was a huge football fan and Winnipeg, of course, was my favourite team. But I also cheered for different players in the CFL I liked to watch.

“I just loved the game and was a student of the game, and often I would be watching certain players more than I was watching their teams. Arland Bruce was a guy that stood out for me when he was in Winnipeg. Milt Stegall, of course, Fred Reid, Charles Roberts. My dad also always told me about Mike Pringle and how hard he ran. The other was Terrence Edwards… he was always making these athletic plays, but it seemed like he was always open.

“And so,” Demski added, “for me to be one of those players that maybe somebody looks up to, especially as a guy from Winnipeg, that’s the reason I play and the reason I play so hard. It’s kind of a pinch-yourself moment sometimes. The other side of it is this is my life, and if I don’t keep focused on this I’m going to get lost in the sauce. I always try to stay humble and work hard so I can be a role model.” 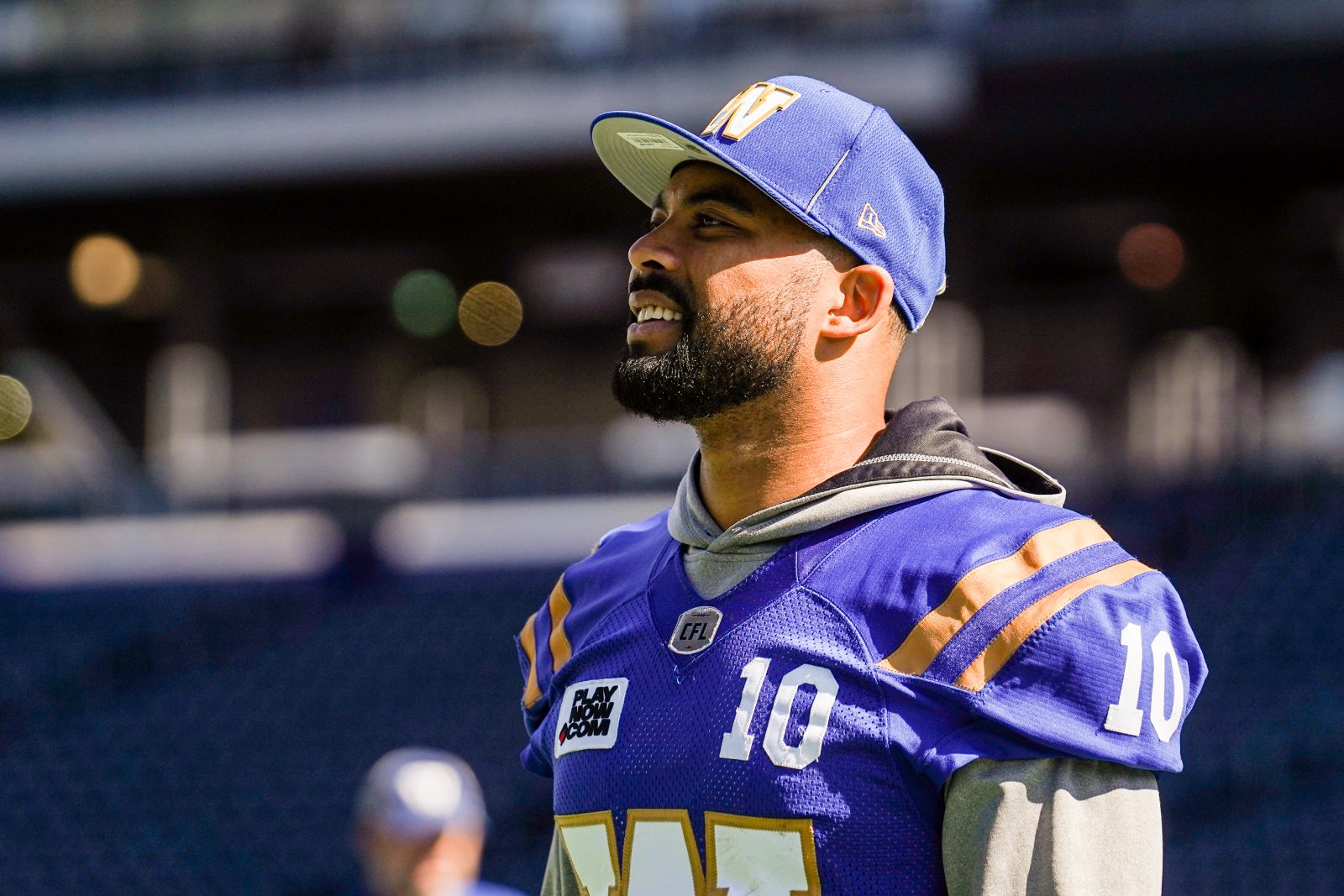 Demski figures to play a major role in the 18th edition of the Banjo Bowl against the Saskatchewan Roughriders as he continues to put up big numbers against the team that selected him in the first round of the 2015 Canadian Football League Draft before he signed here as a free agent in 2018.

In his last four games against the Riders – all Blue Bombers victories – Demski has 19 receptions for 305 yards and two touchdowns, including last week’s sensational over-the-shoulder 50-yard score. Asked what the key to his growth has been, Blue Bombers head coach Mike O’Shea offered this:

“Finding more ways to get him the ball. He’s always been a terrific athlete. If you watched him coming out of university, he was phenomenal, and it was just a matter of finding different ways to use him and get him the ball more often.

“I can remember him back in university. I remember watching the film and saying, ‘This guy’s unbelievable.’ On the field he’s as good an athlete as anybody that’s going to be out there. I like that our offence finds different ways to get him the ball.”

Demski now has nine touchdowns in his last 20 games dating back to last season when he was named the Blue Bombers Most Outstanding Canadian. He missed four games this year due to injury, but still has 36 catches for 412 yards and four touchdowns and has added 78 yards more on just nine carries.

“I love these two games, the Labour Day Classic and the Banjo Bowl,” he said. “My favourite part is just the environment, the whole atmosphere.

“It’s been crazy trying to get tickets for people because it’s been sold out for so long. Just today I found a couple teammates who had tickets to spare, so I’m thankful for that. But there are people left, right and centre asking me for tickets. I was asking Carol (Barrott) in ticketing about it and she was telling me she’s never seen anything like this before. It’s pretty tough to try and get tickets last minute but, again, that’s part of why you dream of playing in games like this.” 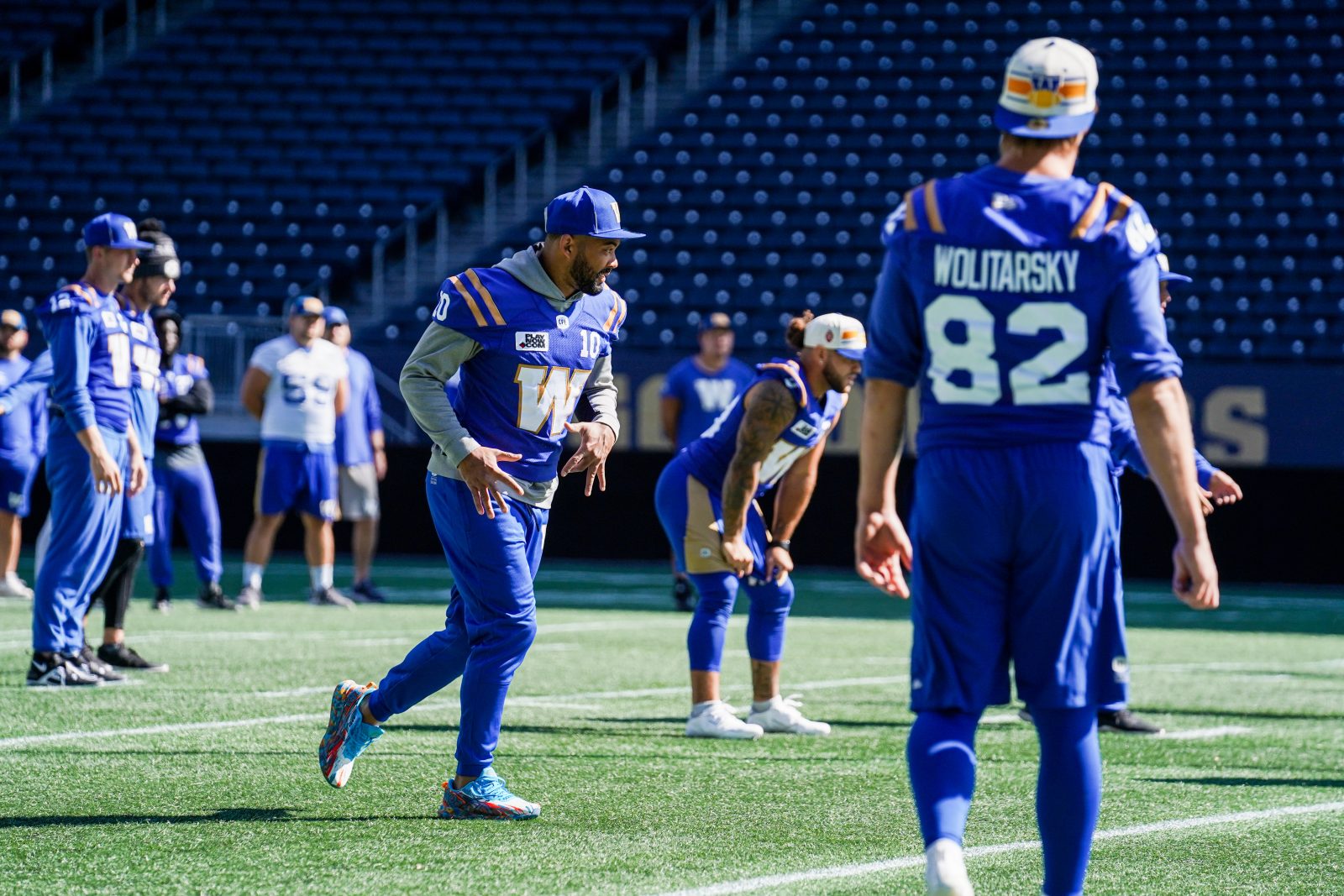 1. THE ONGOING DOMINANCE OF ZACH COLLAROS

A question: has everyone in Bomberland and across the CFL become so accustomed to Zach Collaros leading this team to victory week in and week out that we’ve become numb to it?

Consider that since he was acquired at the trade deadline in October of 2019, the team is 28-3 including playoffs and the two Grey Cup victories. And consider that one of the losses came in the regular season finale in Calgary last year when he was pulled from the game in the second quarter with the Blue Bombers up 3-0 and opting to rest regulars for the playoffs. Another came a couple of weeks ago in the OT loss to Montreal in which the club was certainly in position to win in regulation and extra time.

Collaros has thrown for 2,963 yards this year with 22 touchdowns against 10 interceptions and, most importantly, has his squad rolling along at 11-1.

“I haven’t really thought that deeply about it,” began Collaros when asked Friday to compare his ’22 season to last year. “I’m more comfortable with what we’re doing, just being in the system now for 2 ½ years. The familiarity with Buck (Pierce, offensive coordinator), the familiarity with the guys, the terminology – all those things definitely help to make you feel better, maybe not necessarily about the way you’re playing, but your approach to the game and how you feel out there.

“This year has been different than last year. We’ve had some moving parts (especially in the receiving corps) and for myself, personally, I have to do a better job of being less sloppy with the football.”

That answer, in a nutshell, says everything about Collaros, who often stiff-arms the spotlight to the ground like a would-be tackler. Earlier this week Pierce was asked to describe the QB and the first three words out of his mouth captured Collaros perfectly – competitive, fiery, aggressive.

“That sums up who he is as a person, as well,” said Pierce. “He’s very demanding of himself, very demanding of the guys in the room around him. His attitude and his expectations really raise the bar of everybody else. He truly believes when we get the ball, we’re going to score every single time and if they give us the ball last, we’re going to win the football game.” 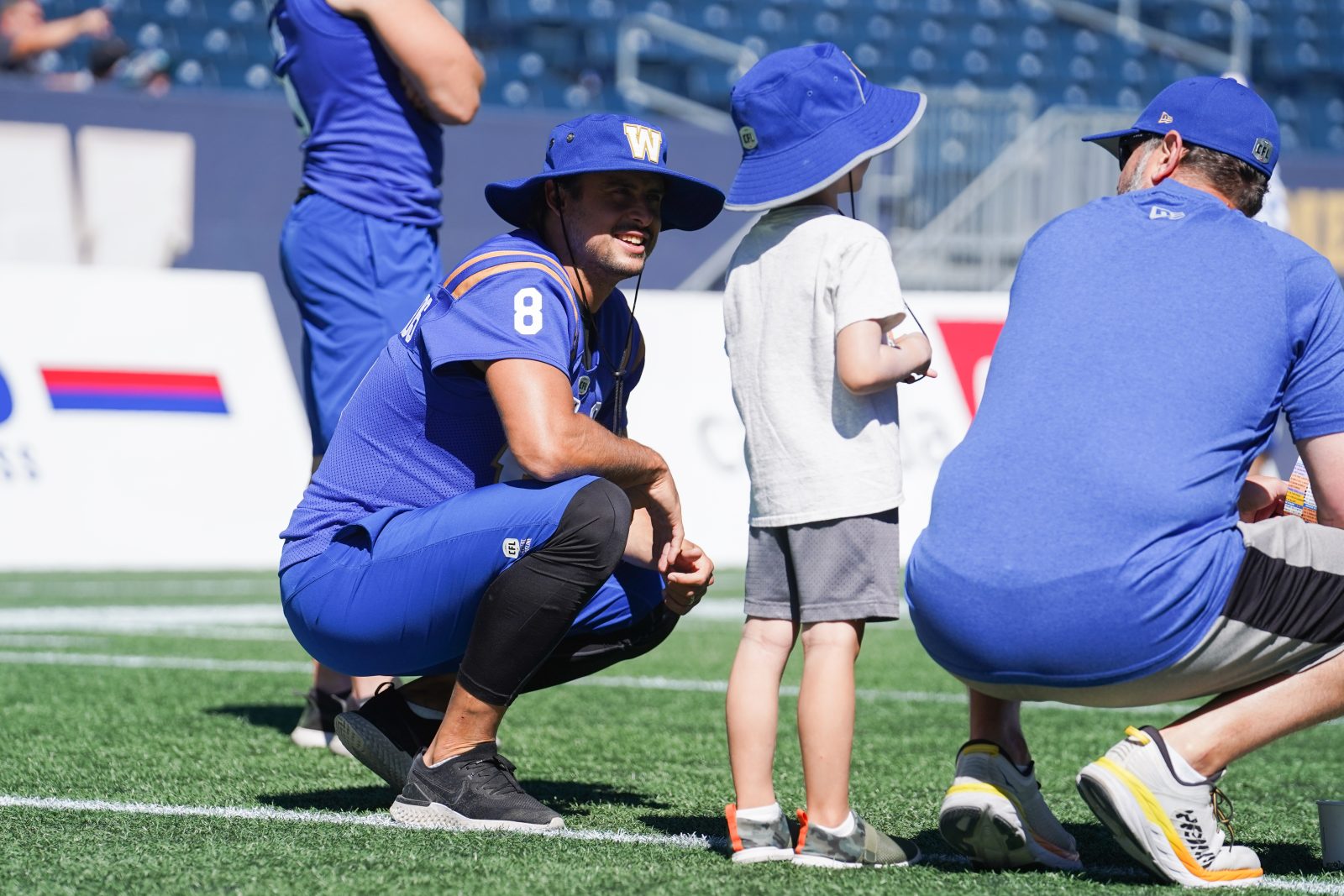 Last week’s Labour Day Classic offered a snapshot as to what some teams try to do schematically in an attempt to exploit the Blue Bombers ‘Dark Side’ defence.

The Roughriders opened the game with a lot of six-man fronts offensively with either a fullback or extra offensive lineman on the field to counter Winnipeg’s dominant front six. They had a ton of success early using that in combination with their regular front, but the Blue Bombers limited Saskatchewan to just a punt single in the second half.

The rematch six days later should make for some intriguing counterpunches from both sides.

“It’s one of the things any team tries to do to slow down those guys up front and to combat that is by running the football,” said Blue Bombers defensive coordinator Richie Hall. “We’ve seen it all year long, maybe a little bit more this past weekend than in the past. We just counter by playing an extra D-lineman or changing things up.

“We didn’t execute the way we needed to regarding our alignment and the physicality aspect of it and early on there was some inconsistency. That opening drive, they drove the ball right up our butts. The second half, we were able to combat it, but we have to be a lot more efficient in order to be successful.” 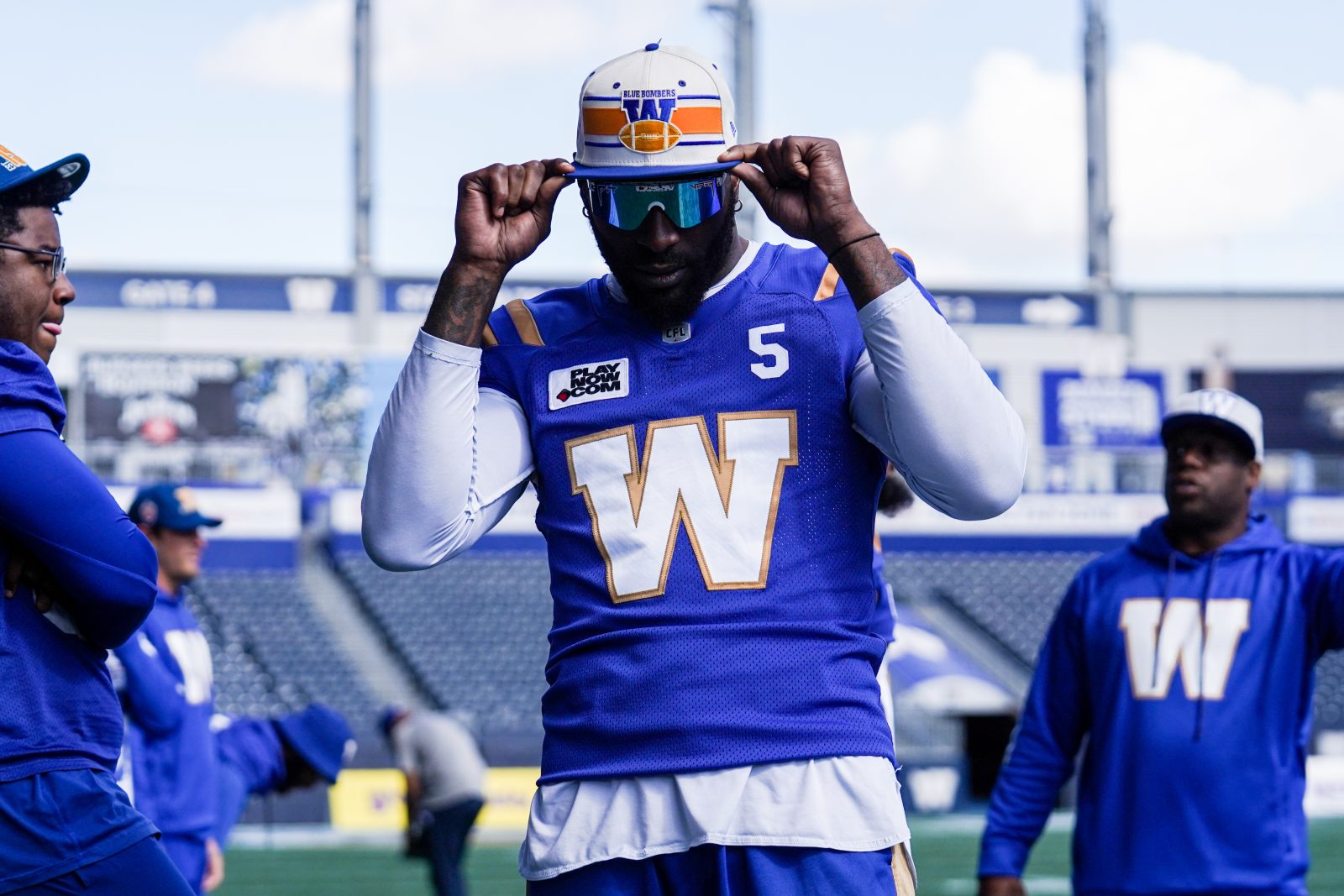 The Blue Bombers put up 20 points last week on the TD grabs from Nik Demski and Dalton Schoen and two field goals by Marc Liegghio – including his 55-yard bomb that was the difference.

But the offence managed 16 first downs to Saskatchewan’s 21, had 289 yet yards to the Riders 379 and had the ball for 25 minutes and 45 seconds, to 34:15 for the home side. Both Pierce and Collaros insisted this week the offence needs to find more consistency.

“The explosive plays are great; you get a couple of those a game,” Piece said. “But we’ve got to be more efficient on first down (averaging 5.2 yards last week). Our production on first down wasn’t good enough. Credit to Saskatchewan’s defence – that’s a heckuva defence across the board – all 12 of those guys on defence and their rotational players are good athletes and they’ve got really good cover guys in the back end as well.

“We’ve got to be a little more diligent and when we have opportunities, we’ve got to be able to win our one on ones. There are things that we’re focusing on this week that we need to be better at. And we expect to be.”