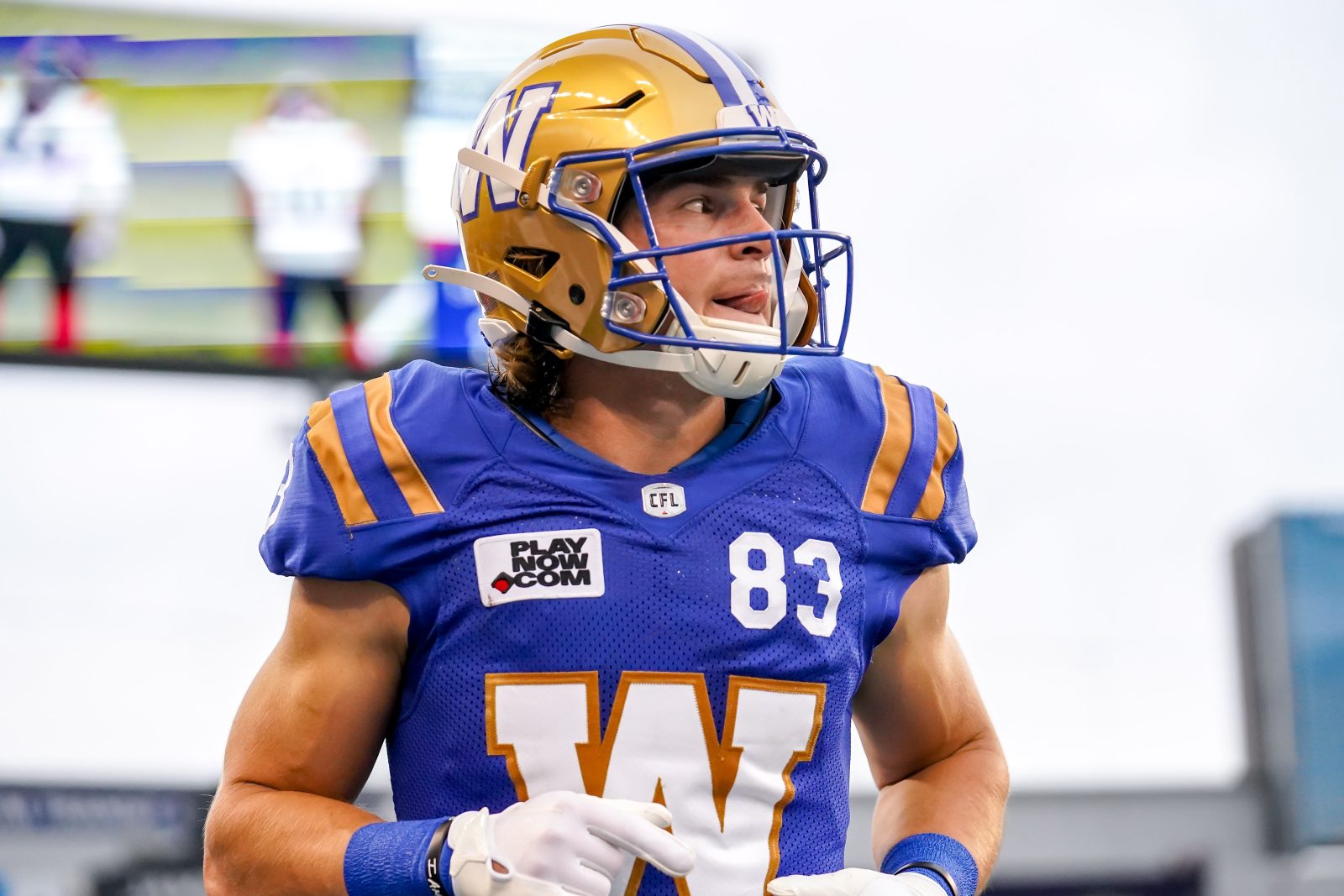 The story has been told and retold many times now, with its layers only getting more detailed as Dalton Schoen’s jaunt through the Canadian Football League continues to unfold.

It’s a riveting tale, the foundation of which is built on so much of what fans love and respect in their athletic heroes, including hard work, humility, and a team-first approach.

And here’s the thing we had further confirmed this week in a conversation with the Winnipeg Blue Bombers rookie receiver: his ‘Street Dog’ attitude – that stay-hungry mantra first instilled in him by his father during his days as a walk-on at Kansas State – aren’t just words, they truly are his everyday mantra.

Schoen has been a revelation for the Blue Bombers through their 11-1 start this year, as he leads the team with 43 receptions for 767 yards and nine touchdowns – tied for the league lead with B.C.’s Dominique Rhymes. It’s also worth noting Schoen is just one TD shy of tying the Blue Bombers record for receiving scores by a rookie, set back in 1951 by Neill Armstrong.

All of this – his numbers, his touchdown total, his overall success this season – figured to be a juicy angle when yours truly asked to speak to him earlier this week. 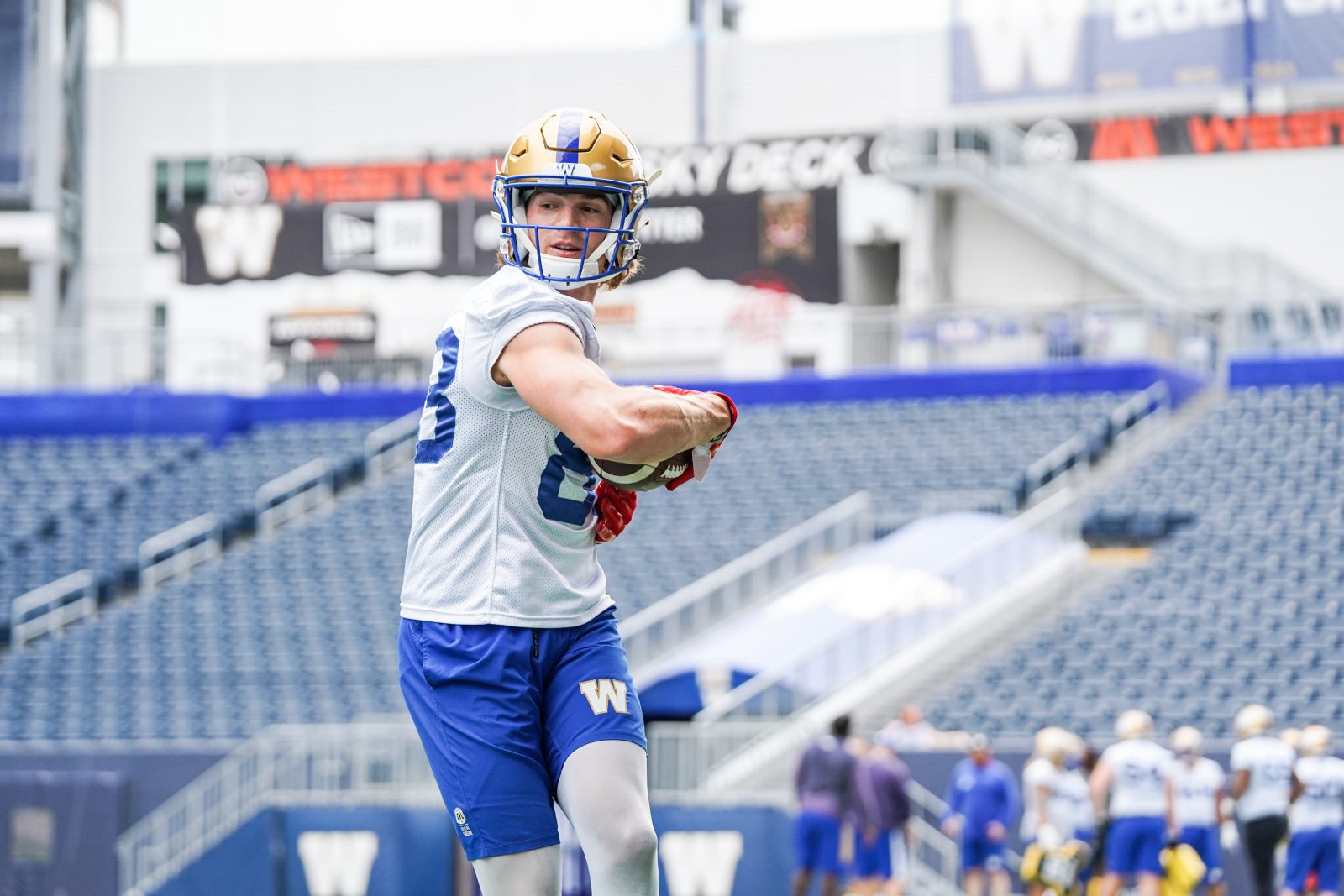 “You know what? I honestly don’t think about that stuff,” Schoen told bluebombers.com. “It’s just been so easy for me to buy into the culture the coach has set here – let’s just go 1-0 each week by focusing on our opponent and just doing our job. I just want to help this team win and whatever I’ve got to do, whether that’s blocking or running routes to get someone else open, or if I’m fortunate enough to have the ball come my way, I just want to go out and execute and do my job.

“All that other stuff – the stats and everything else – is cool when you look back at it. Once this whole football thing is done, I’ll look back at these stats for what they are. But in the moment, I’m just focused on winning each game.”

At the risk of sounding overly melodramatic, we suggested that this approach all circles back to his ‘Street Dog’ approach. The metaphor we floated went like this: a street dog can dine on a leftover steak fished from a trashcan one day but then must return to the daily grind of scrounging for his next meal.

“That’s spot on,” Schoen said. “Like I’ve said before, my dad told me to be a street dog when I went to K-State as a walk-on. But then he reiterated it once I was on scholarship and was a proven starter. He said, ‘Now is not the time to get complacent.’” 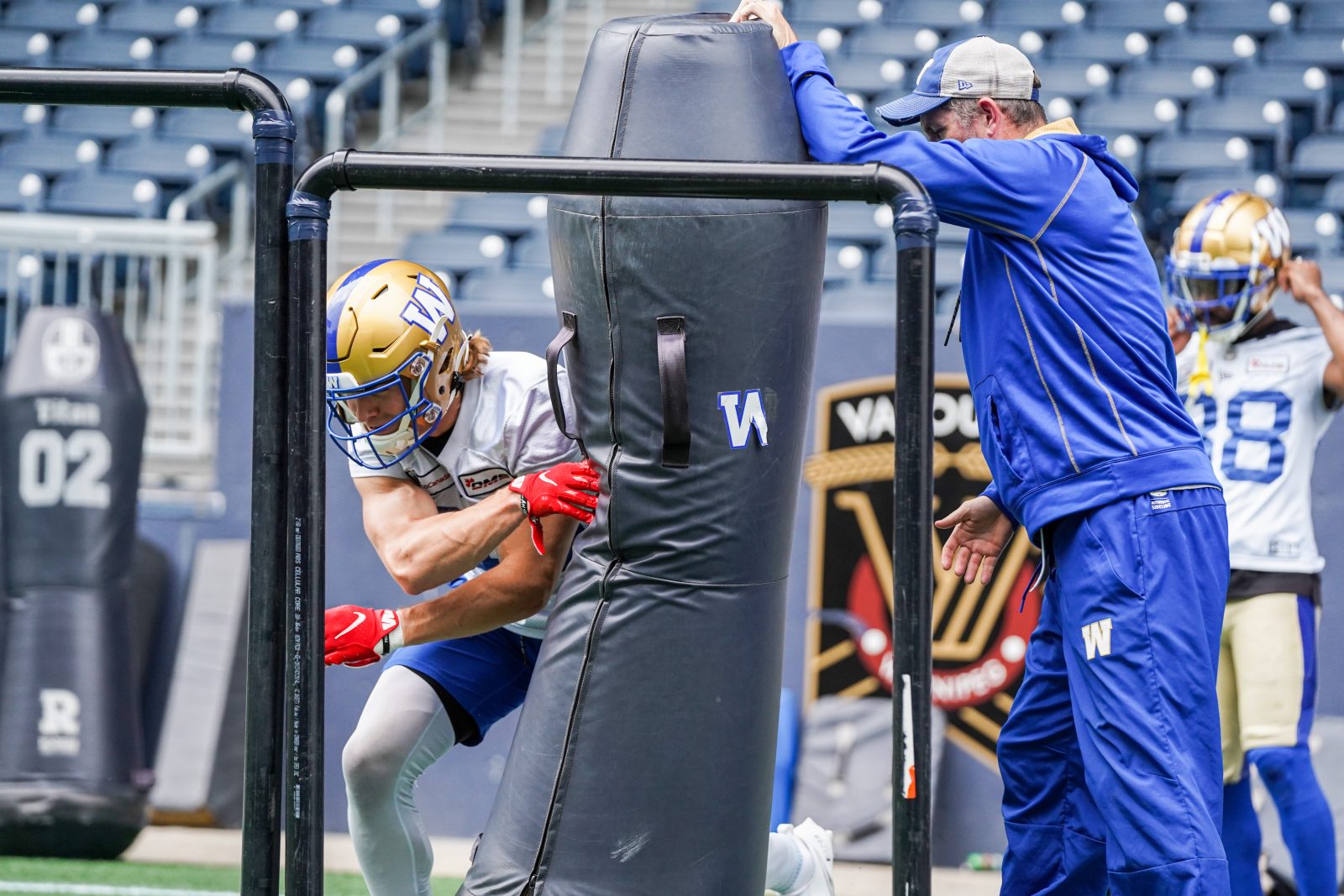 “I had another older person tell me the same thing about when he was a walk-on and then got put on scholarship. He said, ‘I come every day to practice with the mentality I might lose my job if I don’t perform.’ I remember that, so I can’t ever afford to be complacent. It’s something my dad said: ‘You’ve still got to be a street dog even though you’re now on scholarship and even though you’re a starter because if you’re not moving forwards, you’re moving backwards. There’s no in-between. You’ve got to go take it and keep moving forward.’”

Schoen has hit an important mark in his first CFL season. He had NFL looks from the Los Angeles Chargers and Kansas City Chiefs before joining the Blue Bombers but hasn’t played a full season since his senior season with the Wildcats in 2019. Even then, the NCAA season isn’t the grind that a pro campaign can be for a rookie.

“It was definitely an adjustment,” said Schoen. “For me, once we hit that first bye week at that point I had played two pre-season games and 10 regular season games which would be a full college season, so my body is going, ‘Oh, hey, we’re done.’ So, you reset mentally and physically because we’re at the halfway point. I’m getting used to it just fine because it’s something you’re expecting coming into the season and you know it’s a long grind.”

Schoen’s growth has been obvious even as he has become less of a mystery to opposition defences. Case in point: six of his nine touchdowns have come in the last six games, including one last week in the Labour Day Classic. 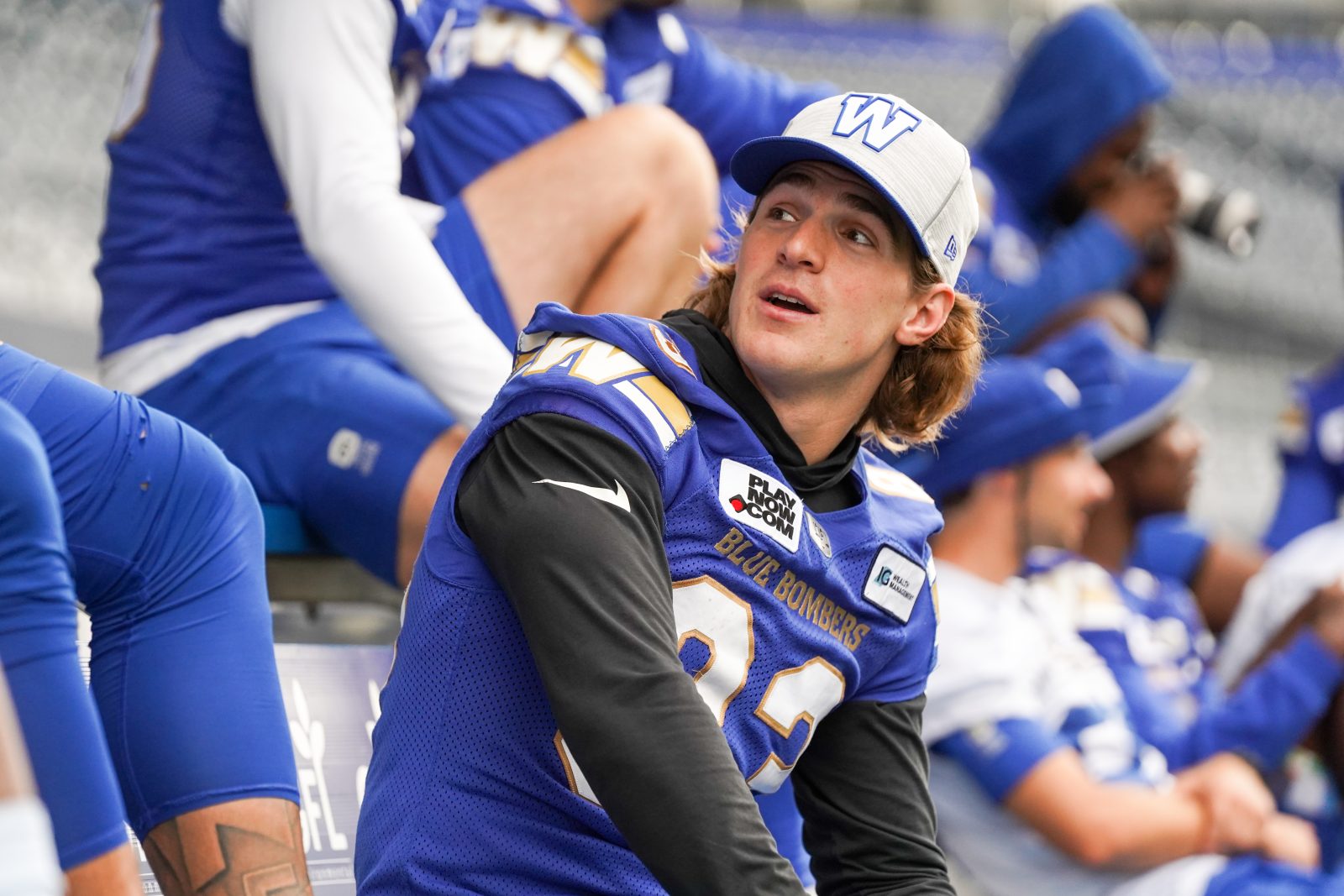 “It’s a world of difference since the start of the season for me,” said Schoen. “I was used to seeing coverages down south and then you come up here and it’s a little different and then you have the pre-snap movement and the Waggle, which makes it even tougher especially when you’re new to it.

“Early on in the season and in training camp it was a lot harder for me to see coverages like I can now and understand what defences are trying to do and what our schemes are trying to do in terms of attacking the defence. I think I’ve come a long way with that in the comfortability aspect of it all.”

One more from Schoen that further reinforces his Street Dog mentality. Even with his hard hat/lunch pail approach we wondered if he had taken even a little time to soak up where he is now in his career, having gone from walk-on at K-State to bouncing around a couple of NFL camps to being a rookie-of-the-year candidate in the CFL.

“I try not to. I can’t,” he said. “I try not to look at that stuff at all because you lose perspective of where you are if you take time to look back at the past too much. Like I said, once I’m done football I’ll look back and enjoy it more.

“Sure, there are definitely people who try to point those things out to me – which I appreciate because they want me to appreciate the moment I’m at – but in this profession you always have to be looking forward.

“Like coach said and like Zach says, ‘We’re trying to go 1-0 each week and we can’t afford to sit on our laurels and look back at what we’ve done in the past.’ You look at the past game to see where we can improve, but you can’t look back at it with any joy and be happy about what you did. It’s all about next, for me at least.

“I have that 24-hour rule: enjoy the win with my team – there’s no better time than being in a locker room after a win and just sharing that with the guys and my friends and family. But once that 24-hour mark passes, and I’ve watched the film and I know the corrections then we’re on to the next.” 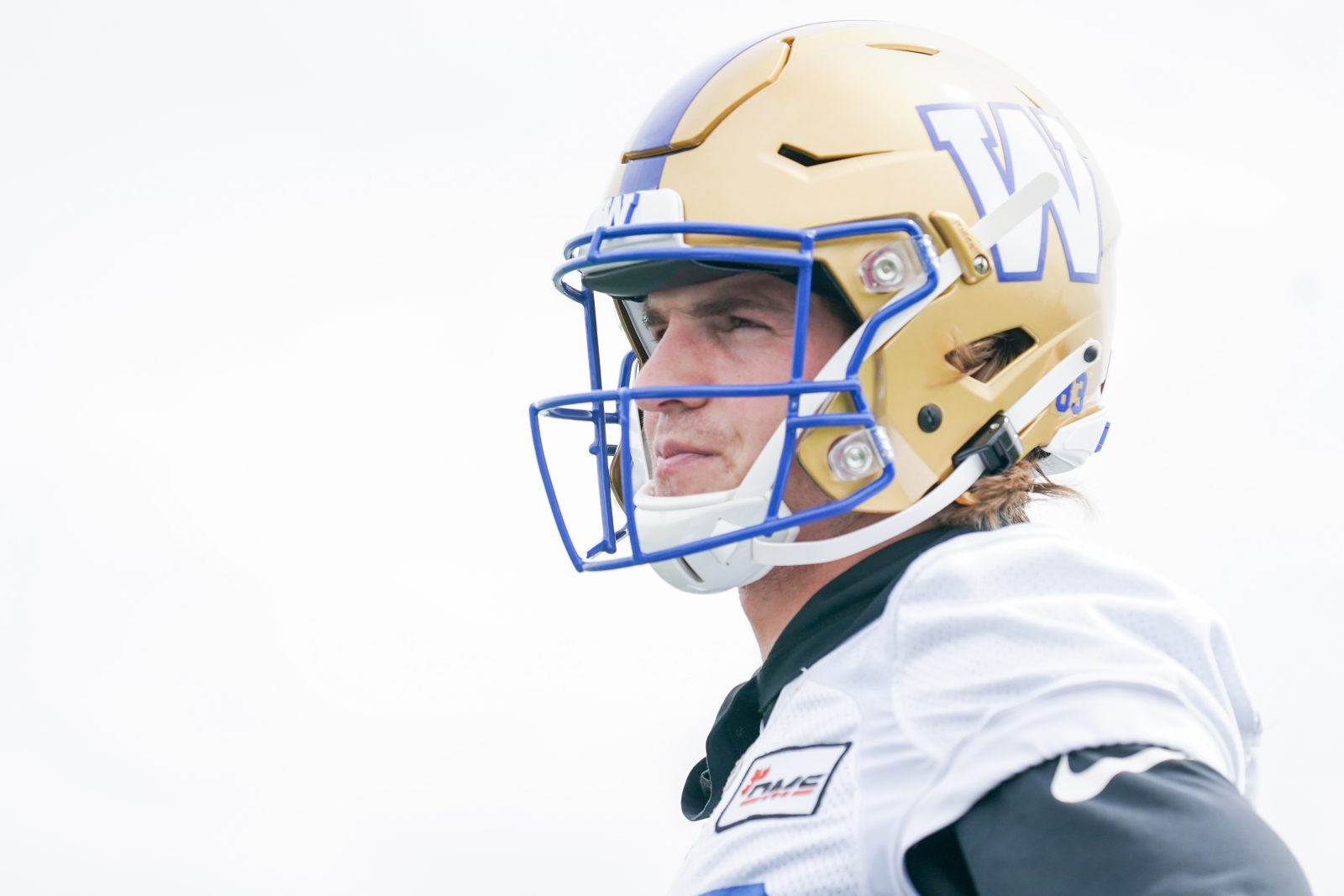 Blue Bombers DE Thiadric Hansen was hurt in the Labour Day Classic and is listed on the injury report as having an Achilles injury. Head Coach Mike O’Shea would not rule him out for the season but has said the big German will be out for a while.

That hurts the Blue Bombers in terms of their depth up front, but also on special teams.

“He’s really been the face of the Global program,” O’Shea said Thursday. “He’s made some big plays for us. I’ve said this before about his production per capita – the amount of production he’s generated per play for the number of times he’s on the field is very high. A lot of times I imagine the average viewer wouldn’t be able to see some of the stuff he’s been able to do.

“He had nine special teams tackles already, so he’s already up there on the list and getting better all the time. He’s also a great teammate that guys love to be around.”

Bet Regal has the Blue Bombers are 7.5-point favourites for Sunday’s Labour Day Classic in Regina against the Saskatchewan Roughriders:

The Blue Bombers over-under point total is currently set at 26.5: