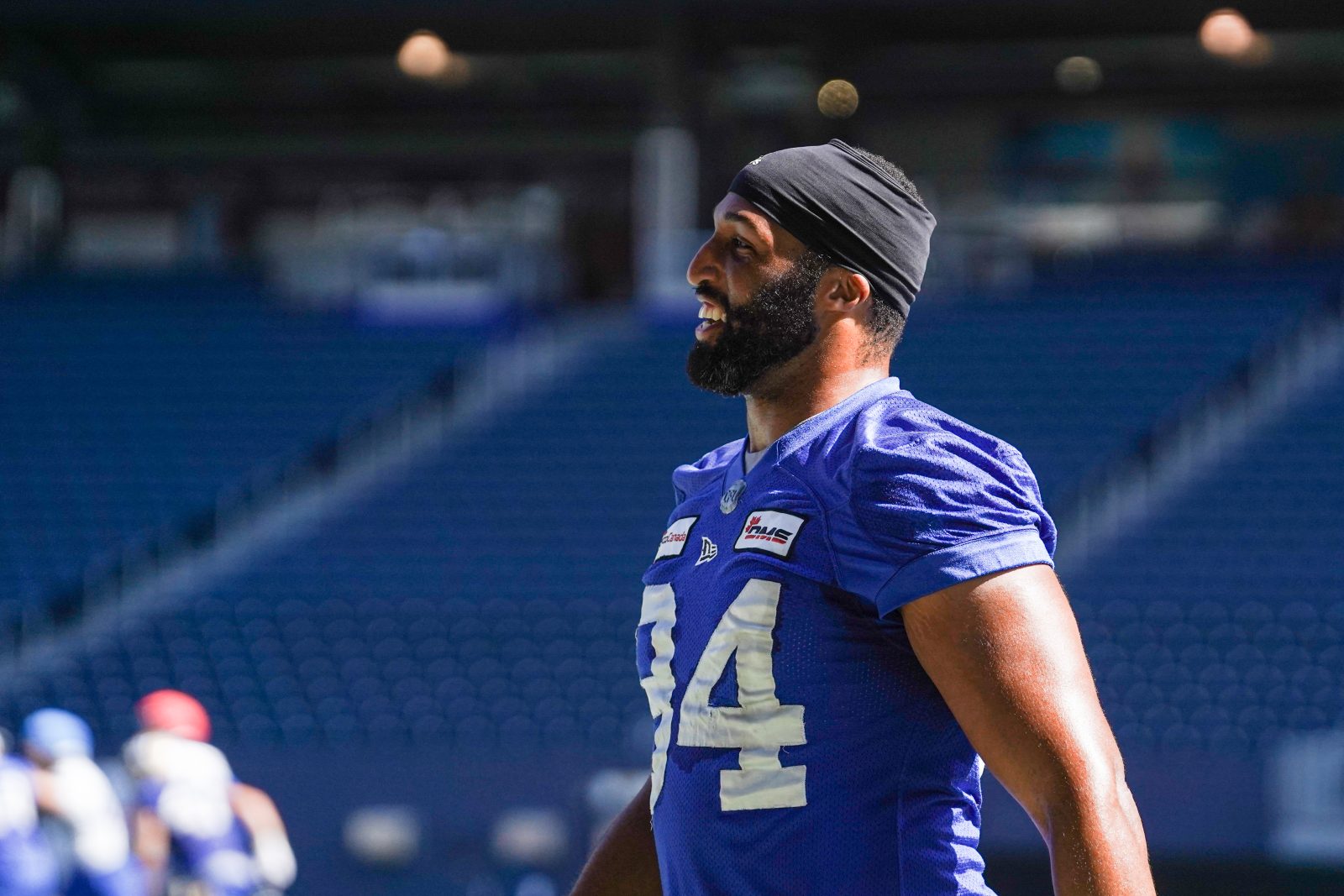 News of a transaction made by the Saskatchewan Roughriders doesn’t often make headlines in Winnipeg but if and when it does, it seldom moves the reactionary needle even a smidge.

And yet when the Riders released defensive tackle Garrett Marino Tuesday afternoon – the same player who served a long suspension and had been fined for his penchant for questionable hits on vulnerable players – it had fans, media and other players across the Canadian Football League either reacting with a shrug of the shoulders or going apoplectic.

Put the Blue Bombers, who saw Marino deliver a questionable hit on quarterback Zach Collaros that was not penalized but is most certainly being reviewed by the CFL, somewhere in between the shoulder shrug and fiery rage reaction – especially knowing they meet the Roughriders again this weekend in the Banjo Bowl and don’t need to add fuel to an already fiery rivalry.

“He’s not a member of the Blue Bombers,” said Collaros of the Marino release, “and I wouldn’t even comment on that.”

Just to briefly recap; in the fourth quarter of the Labour Day Classic win, the Blue Bombers had run a fake sweep to Nic Demski/pitch to Brady Oliveira that subsequently left Collaros with his left side exposed. He was then hit by Marino in a play that could have been penalized, but was not. 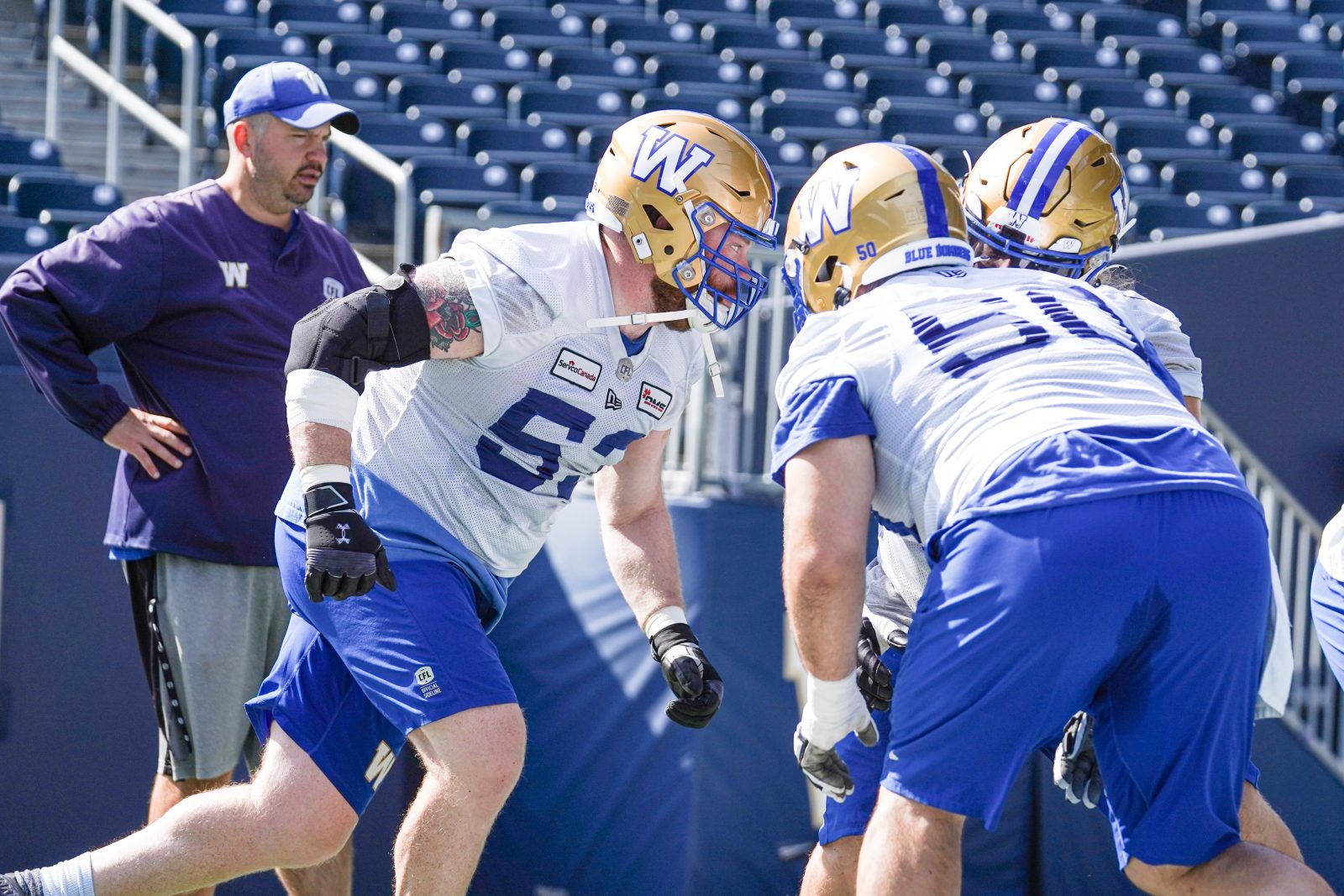 “Watching it more closely after I think it’s a penalty,” said Blue Bombers head coach Mike O’Shea after practice on Wednesday. “The term is ‘unnecessary’ (as in unnecessary roughness), so you have to believe that’s unnecessary.”

O’Shea said he would not comment on the Marino release as ‘how Saskatchewan handles their business is none of my business.’

He did say he had not heard back yet from the league on the legality of the hit or why it was apparently reviewed by the command centre without the play being penalized, but ‘I expect we’ll have a conversation about it in the next few days.’

O’Shea did add this with a big picture take on protecting QBs and Marino, who was suspended for his hit earlier in the summer on Ottawa RedBlacks quarterback Jeremiah Masoli, which ended his season: “From a fan’s perspective looking at the league as a whole, once again, from our positions and everybody involved in the league should be at some point looking after the league and putting the league’s welfare in your thoughts should be important. We all want the league to thrive. Not having really great players available definitely hurts our league.”

Asked if Marino should get another chance in the CFL with another team, O’Shea thought for a moment.

“I would say it’s just the behaviours repeated so many times… it would be pretty tough.” 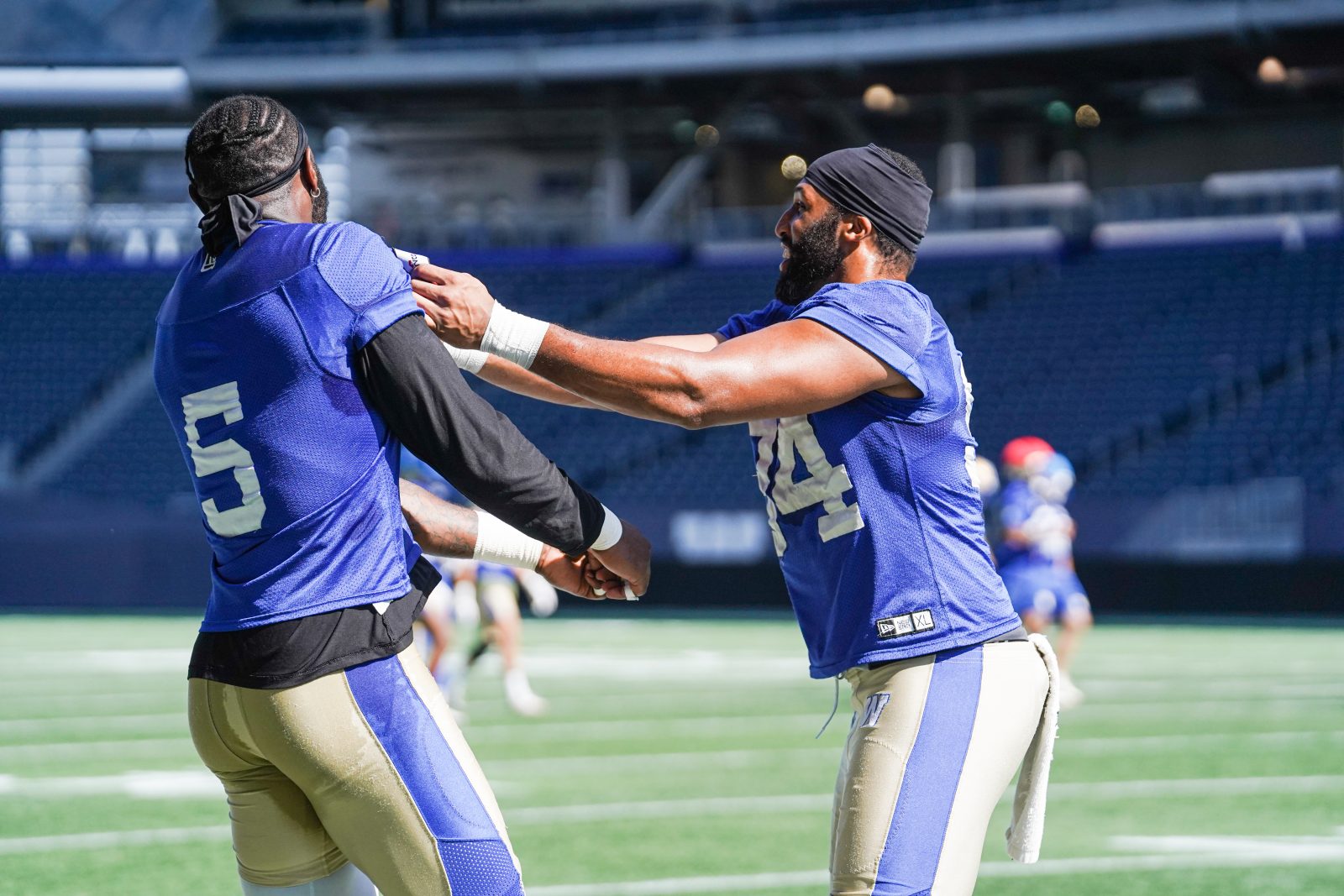 It’s worth noting that Marino was one of the players involved in a nasty dust-up in last year’s Banjo Bowl after a Sean McGuire QB-sneak touchdown. That incident resulted in six roughing penalties assessed totalling 105 yards and saw two players ejected – Riders defensive back AJ Hendy and Marino.

All this means that after Wednesday’s media availability, the issue will likely be dead as a topic of conversation in Bomberland.

“It was a run play, so (the hit from Marino) was just unexpected,” said Collaros. “It’s been dealt with now, so we’re just getting ready for this week.”

Asked if he thought the play went beyond the rules, Collaros added, “I’m still not sure how it’s been interpreted, but I know he’s been released, so… that’s it.”

Collaros said he doesn’t expect the Marino release to ‘turn down the temperature’ of the rematch with the Riders this weekend. The Blue Bombers-Roughriders rivalry, after all, always features just a little extra juice.

“(Marino) wasn’t a talking point going into last week,” said Collaros. “It’s a great rivalry. Saskatchewan’s a great football team, (Regina is) a great football town. Obviously there’s a lot of history between the two provinces. It’s going to be a great atmosphere in here and we’re really looking forward to it.” 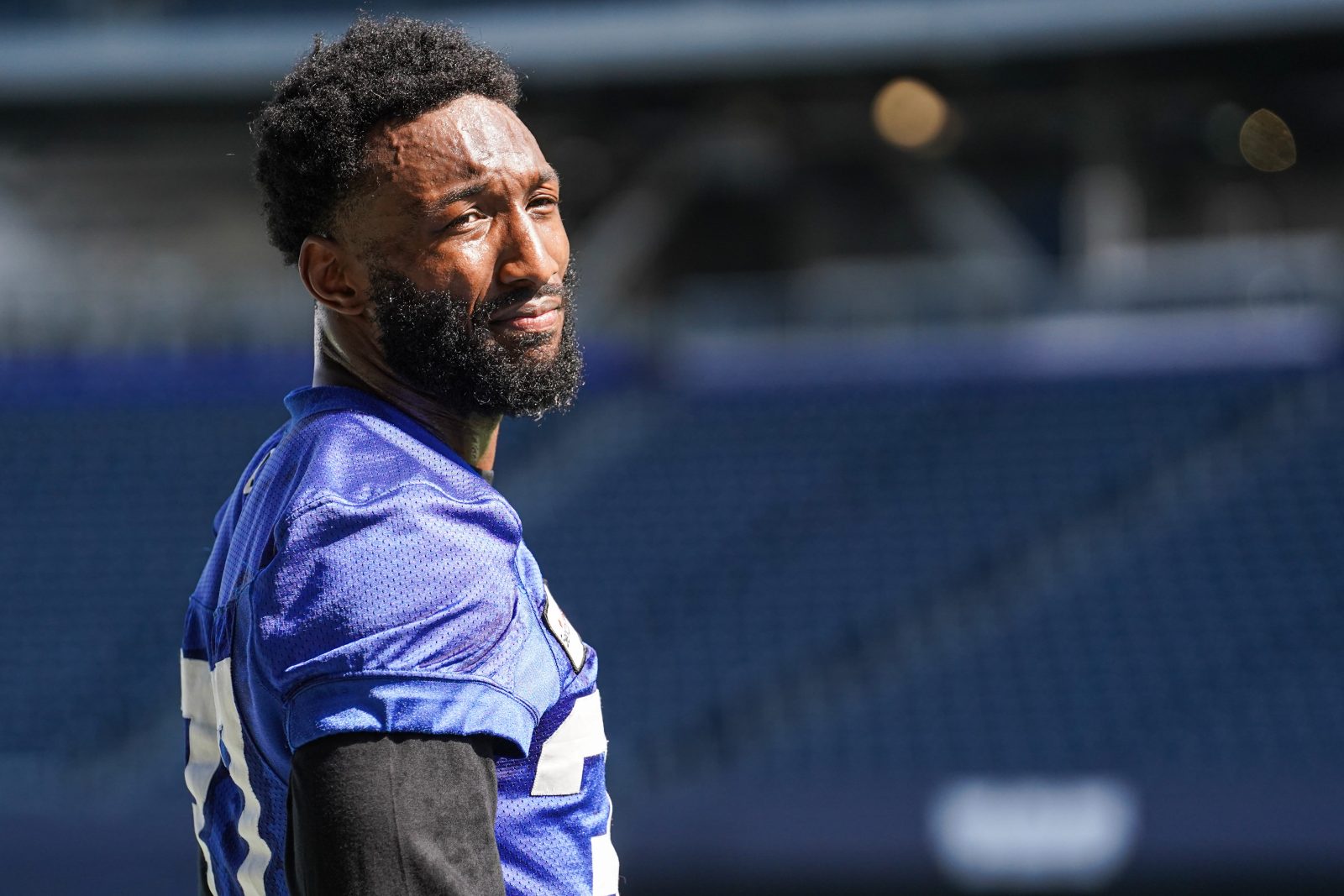 The topic of discipline certainly became an issue in the aftermath of the Blue Bombers’ 20-18 win in the Labour Day Classic, as Winnipeg was penalized six times for 40 yards, while the Riders were flagged a whopping 11 times for 99 yards.

That’s an ongoing issue in Saskatchewan, where the Riders are the most penalized team in the league – 1,076 yards in infractions through 12 games – while the Blue Bombers are the least at 563.

The talking point came up at Wednesday’s media availability, when O’Shea was asked if he took pride in his team perennially being one of the fewest penalized teams in the league.

“I don’t think I get prideful about it,” O’Shea said. “When we get new players in the building it’s certainly explained to them how we handle things here, what our core principles are and that kind of thing, so I think they have a pretty good understanding right away of what the expectations are. Other than that, it’s not a topic of conversation on where we stand amongst the rest of the league, really ever.”

As to be discipline buy-in from his players. 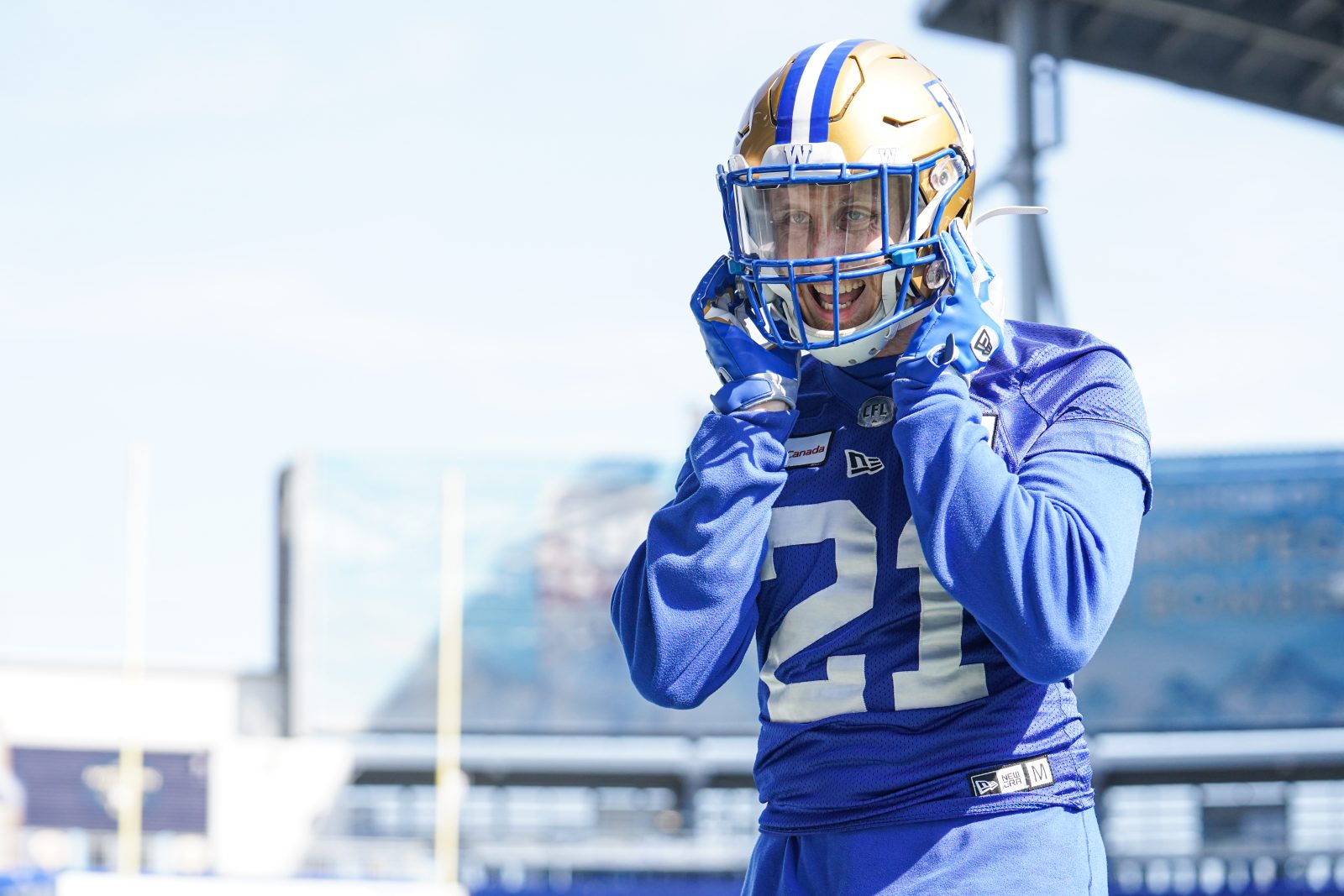 Nick Hallett’s first interception as a pro in the Labour Day Classic couldn’t have come at a more opportune time, what with the Blue Bombers protecting a 20-18 lead late in the game and the Riders marching into Winnipeg territory.

The young safety snared a Cody Fajardo pass while the Riders QB was under pressure from Willie Jefferson and the ball glanced off Frankie Hickson’s hands with just under two minutes remaining.

“Honestly, I don’t really remember it. I’ve watched it so many times, that’s what I remember now,” said Hallett with a grin. “But it’s cool. You just have the whole team working together. You have the front line getting after (Fajardo) and it makes it hard to throw it; you have all the other DBs dropping into their spots and Biggie (Adam Bighill) and Shayne (Gauthier) closing in… it was very exciting to get it.

“It’s very special. I’ll always remember that. It was my first-ever career pick.”

Hallett said he has the football and will be giving it to his parents, who attended Wednesday’s practice and will be at Saturday’s Banjo Bowl.

“(The interception) is good for my confidence,” said Hallett. “I’ve always been confident. I always wanted to compete and show that, but it is just nice to get a little bit of recognition. And helping the team, that’s all I really want to do, whether that’s on specials, defence – wherever they need me to just make an impact on the game.” 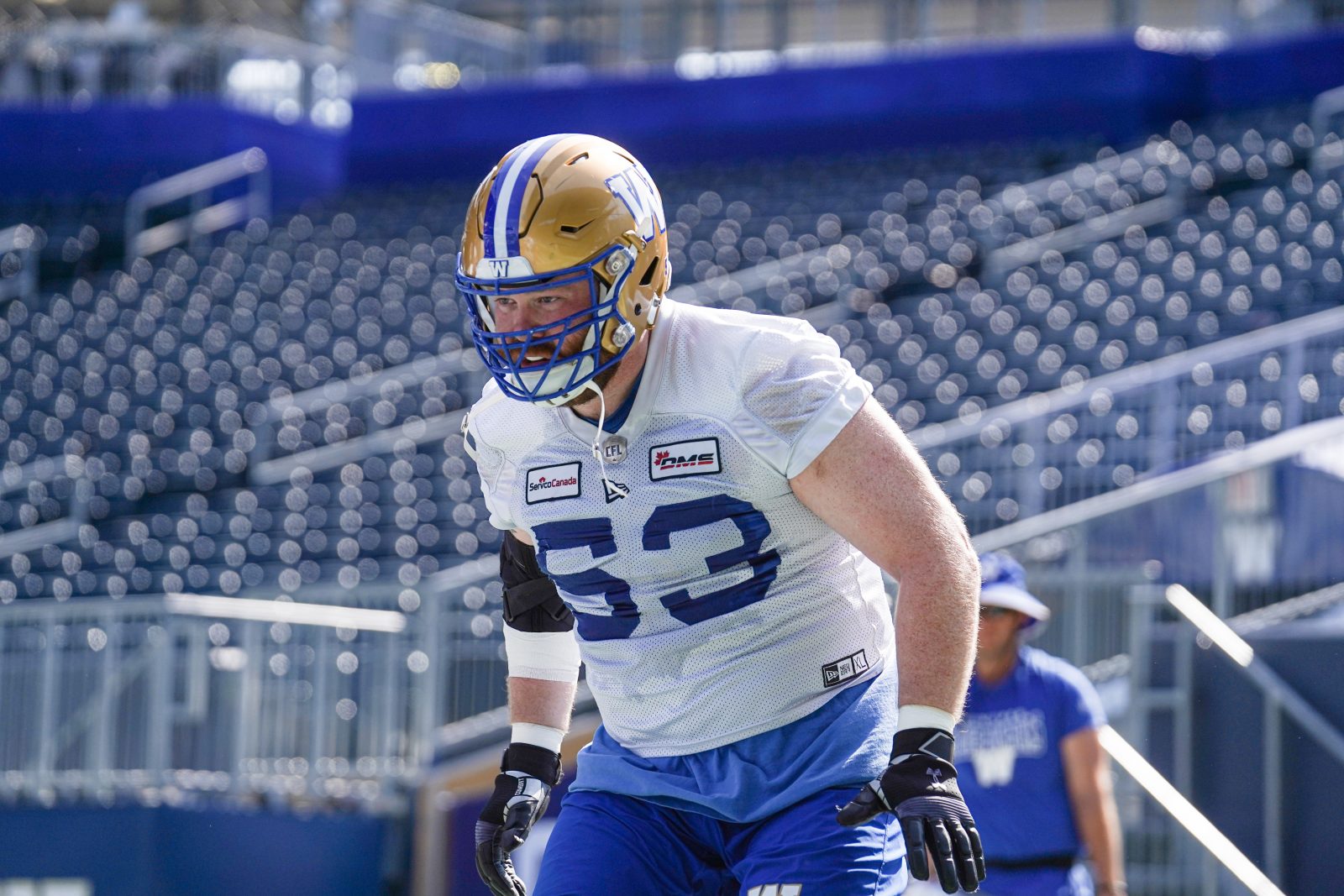 The Blue Bombers have added veteran receiver Kelvin McKnight back to the practice roster and also announced Tuesday the addition of American DB J.T. Hassell.

Hassell (5-11, 200) played his college ball at South Dakota State and Florida Tech. He has had NFL looks from the Cleveland Browns, New England Patriots and New York Jets.

Safety Brandon Alexander and centre Michael Couture were both participants at practice on Wednesday, but their status for the Banjo Bowl won’t be known until Friday.

Not practising were WR/KR Janarion Grant, WR Greg Ellingson, CB Demerio Houston, while LB Adam Bighill was limited. And the news is not good for Global DE Thiadric Hansen, who is listed as having an Achilles injury with O’Shea said ‘he’s going to be out for a bit.’

All four of Drew Wolitarsky’s catches in Sunday’s win were second-down conversions and he now has 13 this season.

“He’s so smart,” O’Shea said of Wolitarsky. “He has a great feel for the game. He’s right on time. The quarterbacks come to trust a guy and you know where to put your eyes. Pre-snap you know where he is and when things break down you end up developing a real trusting relationship that he will be in an area to bail you out which is pretty cool to watch.”