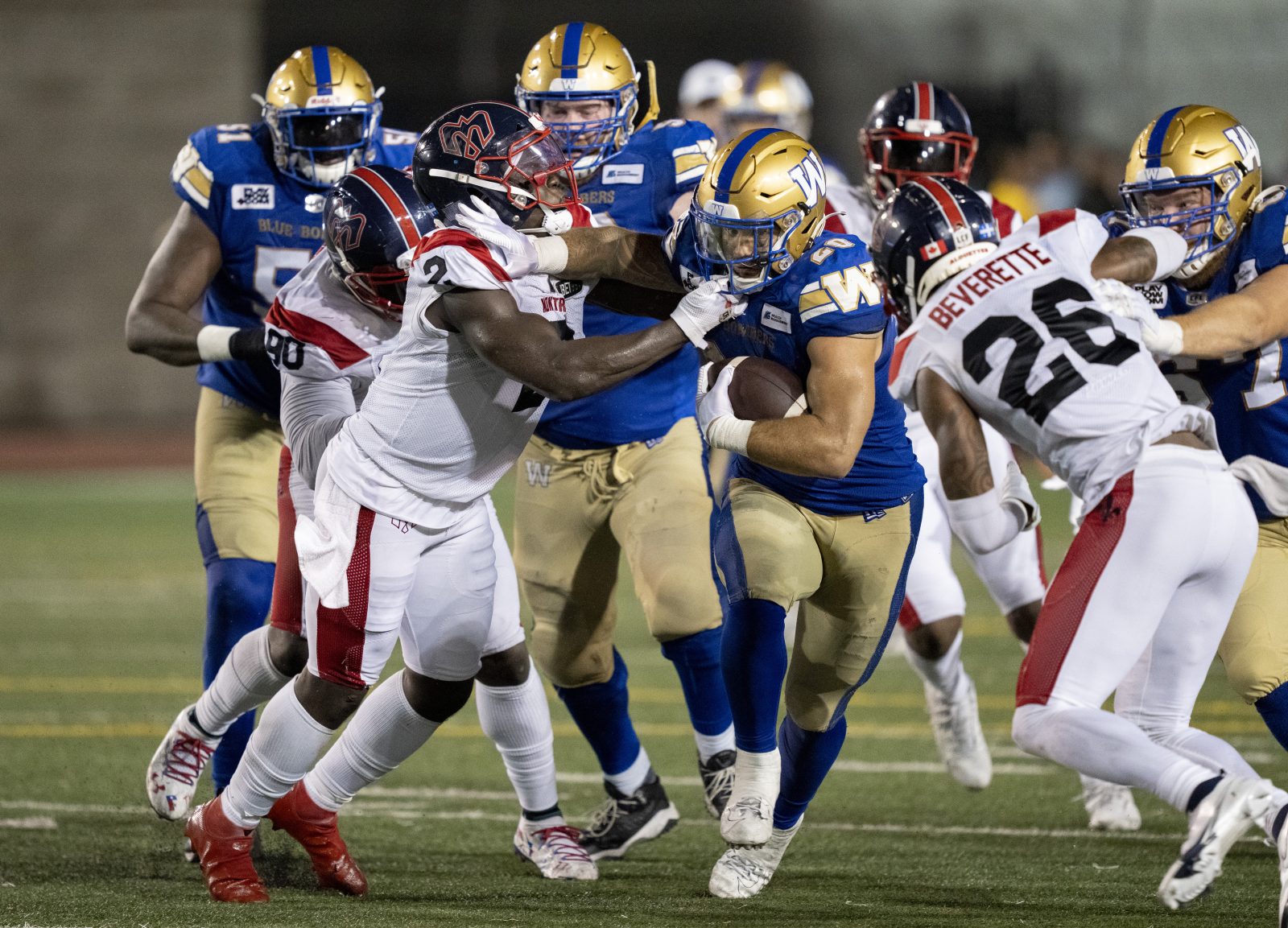 MONTREAL – They’re not all going to be masterpieces or destined to be featured in eternity on ESPN Classics. But on a night in which the Winnipeg Blue Bombers were, to coin a phrase, imperfectly perfect, they scrapped and clawed and grinded their way to a 35-20 victory over the Montreal Alouettes at a steamy Molson Stadium Thursday, pushing their record to 9-0.

As a result, the Blue Bombers have now accomplished something that hasn’t been done in Winnipeg since 1960 in what was a 10-0 start. And, not surprisingly, they’ll spend exactly zero seconds basking in that.

“There’s no point in looking back at where we came from because no one cares,” said linebacker Adam Bighill. “It’s about going forward. It’s about 1-0 next week. It’s about getting a playoff spot and being able to play in November.

“We have a mission to improve steadily each week and nothing’s going to stop us from doing that. We’ve got to keep looking forward.”

On a night in which the Blue Bombers were guilty of more than their share of mistakes – they lost the critical turnover battle 4-3 – they still managed to find a way to get it done when it mattered most. 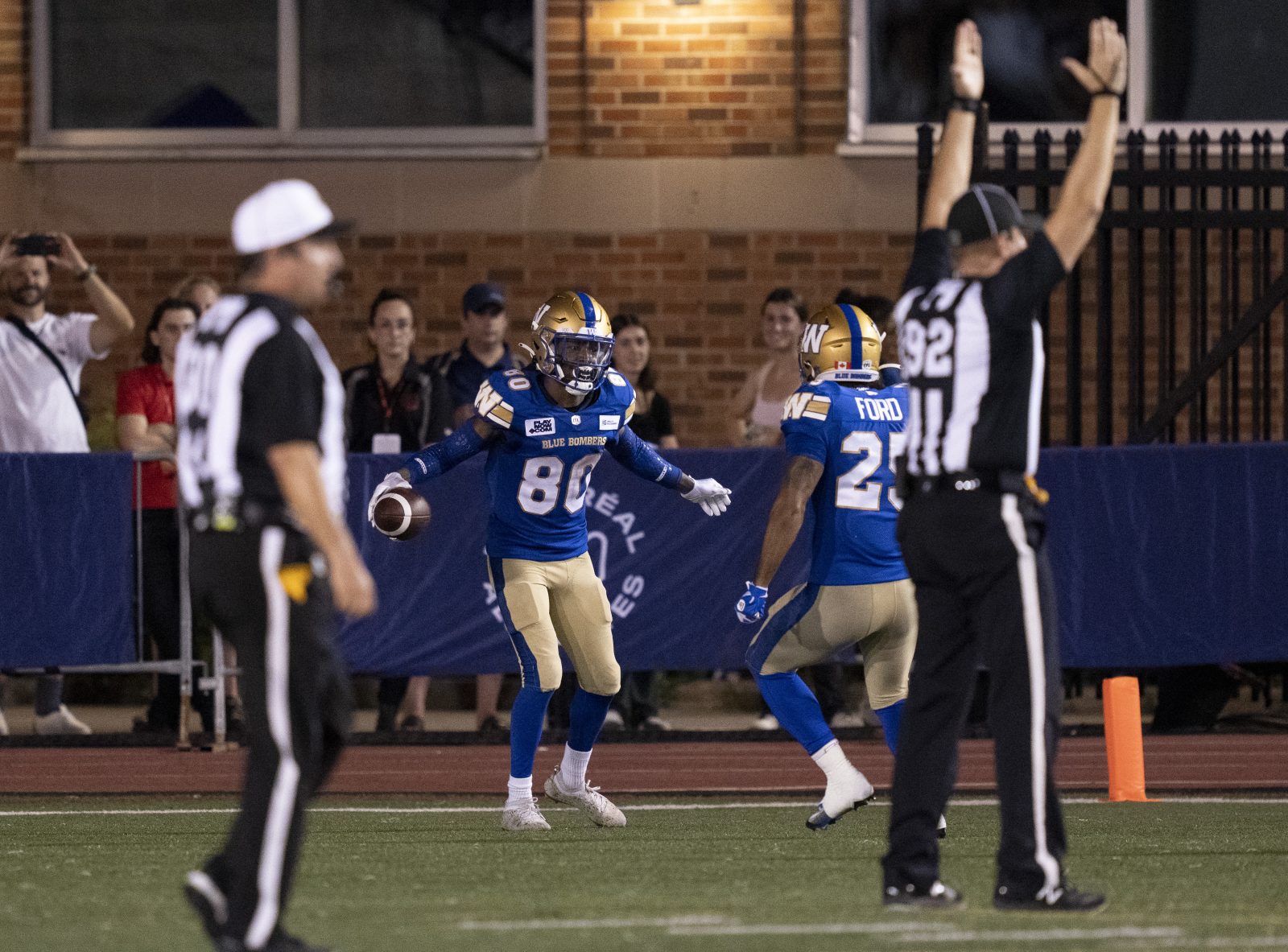 Tied 14-14 in the fourth quarter against an inspired Alouettes outfit, the Blue Bombers then brought the hammer down with a 21-point outburst before giving up a late TD that was simply scoreboard cosmetic surgery.

It began with a nine-play 95-yard drive capped by a Dakota Prukop score, was followed by a critical Janarion Grant 57-yard touchdown and then finished by a Brady Oliveira touchdown run. In what was a game that was more street fight than work of art, the Blue Bombers flashed their championship pedigree.

“That’s as tough a situation as our guys have been in and full marks to Montreal,” said head coach Mike O’Shea. “They took the ball away early and often and our guys just kept on grinding and digging. That 104-yard drive was special and then the defence started taking the ball away and making plays. That’s a really good win.

“The guys found a way to give a little more. That’s damn good. They’re always thinking of their teammates and getting it done right for them. So, for them to dig deep and be able to give more like that is pretty special.”

The Blue Bombers wrapped up a gruelling portion of their schedule – six games in 32 days – with their third straight road win on the road. Overall, the club is 6-0 on the road and 3-0 at IG Field, where they’ll finally return next Thursday in a rematch with the Alouettes.

“Tonight we played Winnipeg football and that’s offence, defence and special teams – all three phases of football playing together,” said Willie Jefferson. “First half we had to find it, but in the second half – fourth quarter especially when we really needed some plays – everybody stepped up and we came through.”

“It shows we’re going to play to the last whistle,” Bighill added. We got guys that believe we can win with just one snap left. We had a whole quarter of football left, there’s sill a lot of work to do, a lot of work to be done.

“We got guys that believe, that know what they’re doing and execute at a high level. Good things happen when you just keep putting your head down.” 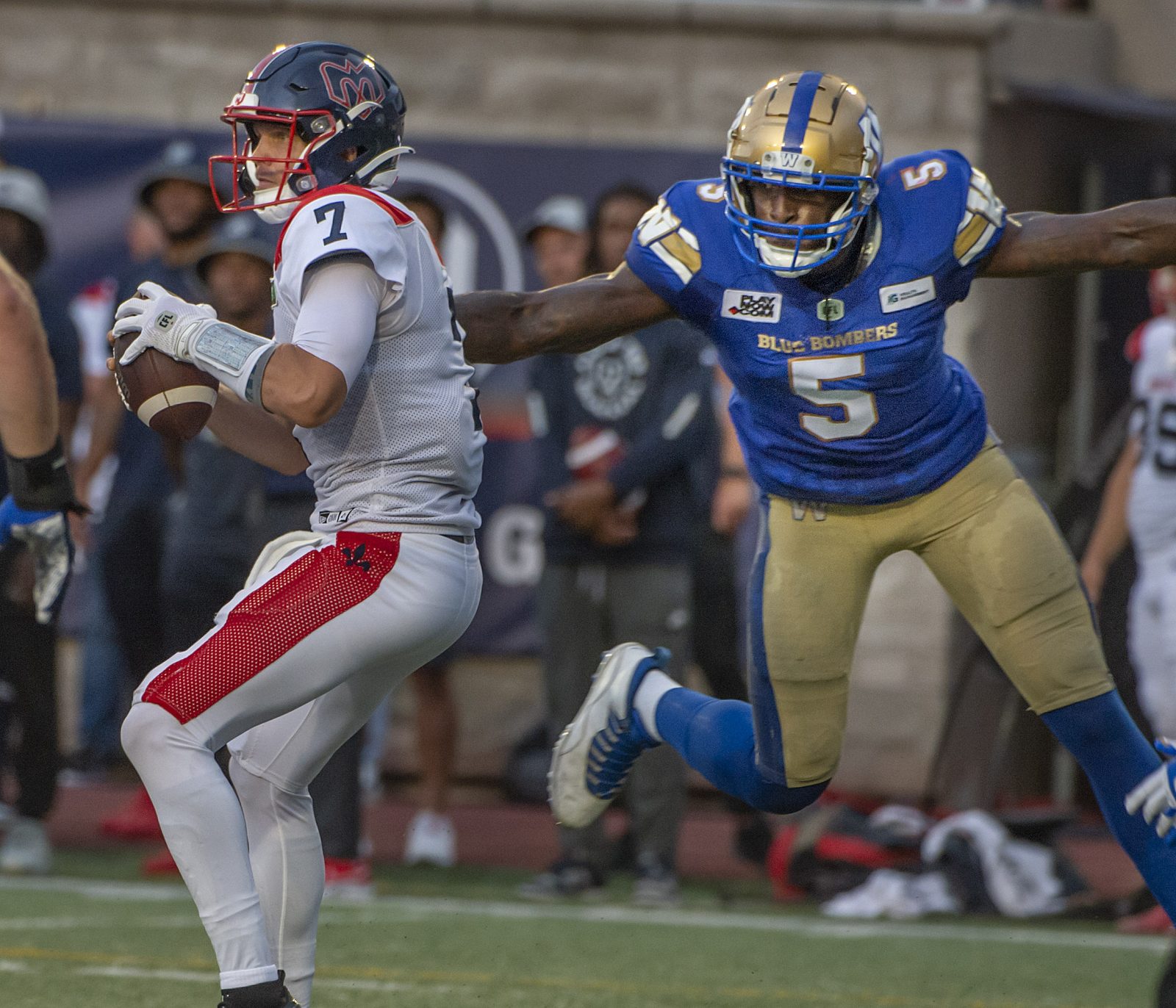 The Blue Bombers had just taken the lead in the fourth quarter with a Dakota Prukop TD when Janarion Grant and the return unit brought the sledgehammer down with a game-breaking punt-return score. That TD – the first punt-return score in the CFL this season – have the club a two-score lead and was a nail in the Alouettes casket.

Nobody on the team wants to talk about it, so we will. It’s been decades since a Blue Bombers team opened a season with nine straight wins – since 1960, to be exact – and even though there are no midway medals, it is historic.

Offence: Brady Oliveira, RB: On a night in which the offence had its struggles, the ground game was a consistent force. Oliveira led the charge with 17 carries for 92 yards, adding 35 yards on his one pass reception.

Defence: Winston Rose, CB: A ton of candidates, but the veteran corner led the club with six tackles and also added an interception that was part of the fourth-quarter dominance.

Special teams: Janarion Grant, KR: Marc Liegghio had a solid night, but Grant’s punt-return score was crucial. He finished the night with six returns for 125 yards, including the 57-yard major. 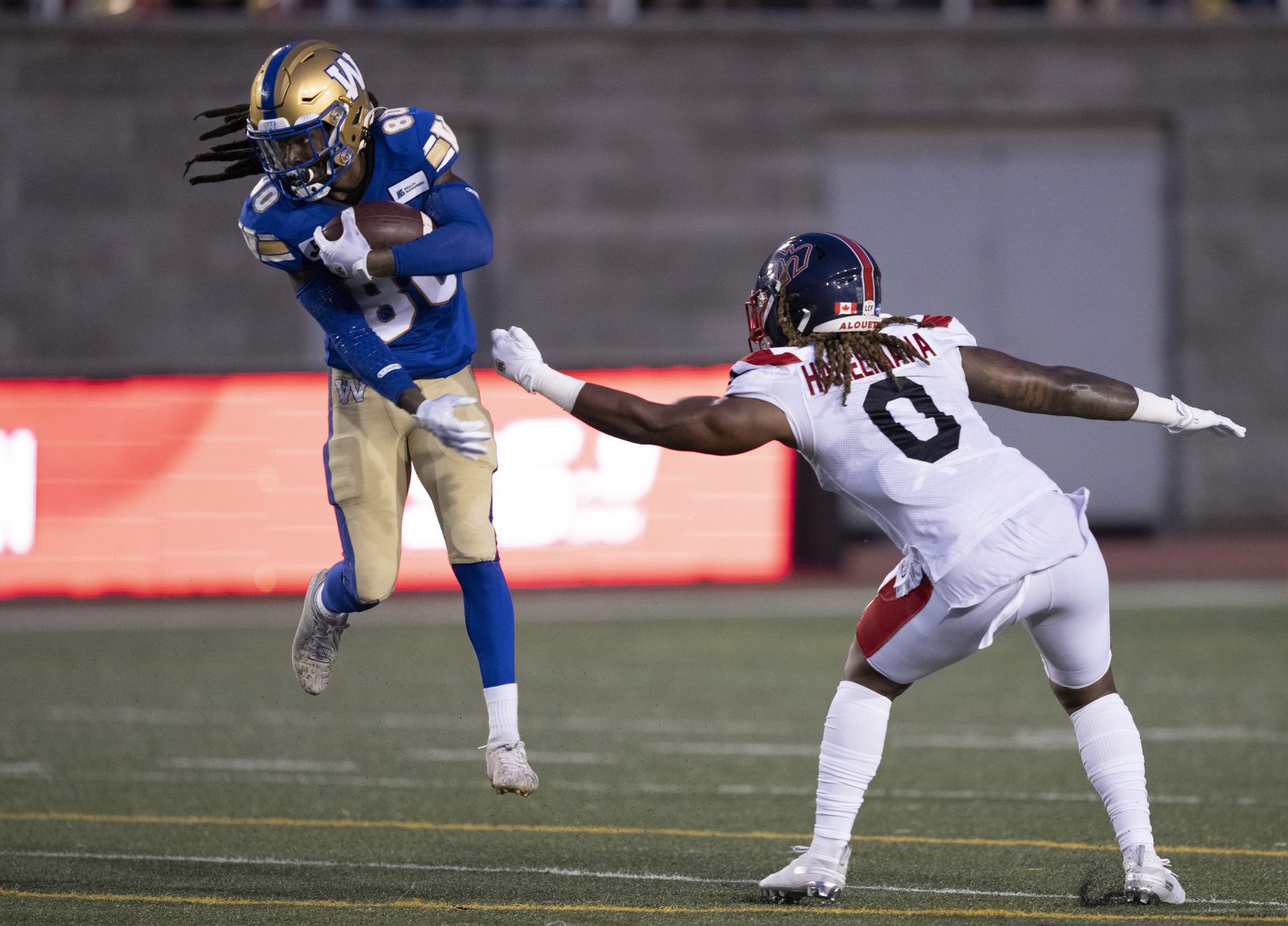 The Blue Bombers are now 6-0 on the road this season with wins in Ottawa, Toronto, Vancouver, Edmonton, Calgary and Montreal.

The last time they won their first six road games to open a season was in 1960, which was the start of their CFL record of 20 consecutive road victories that ran through to 1962.

NEXT: This nasty stretch of the schedule behind them, the Blue Bombers return home to face the Alouettes next Thursday at IG Field. that has them playing five of six games on the road and six games over 32 days – this Thursday in Montreal against the Alouettes.