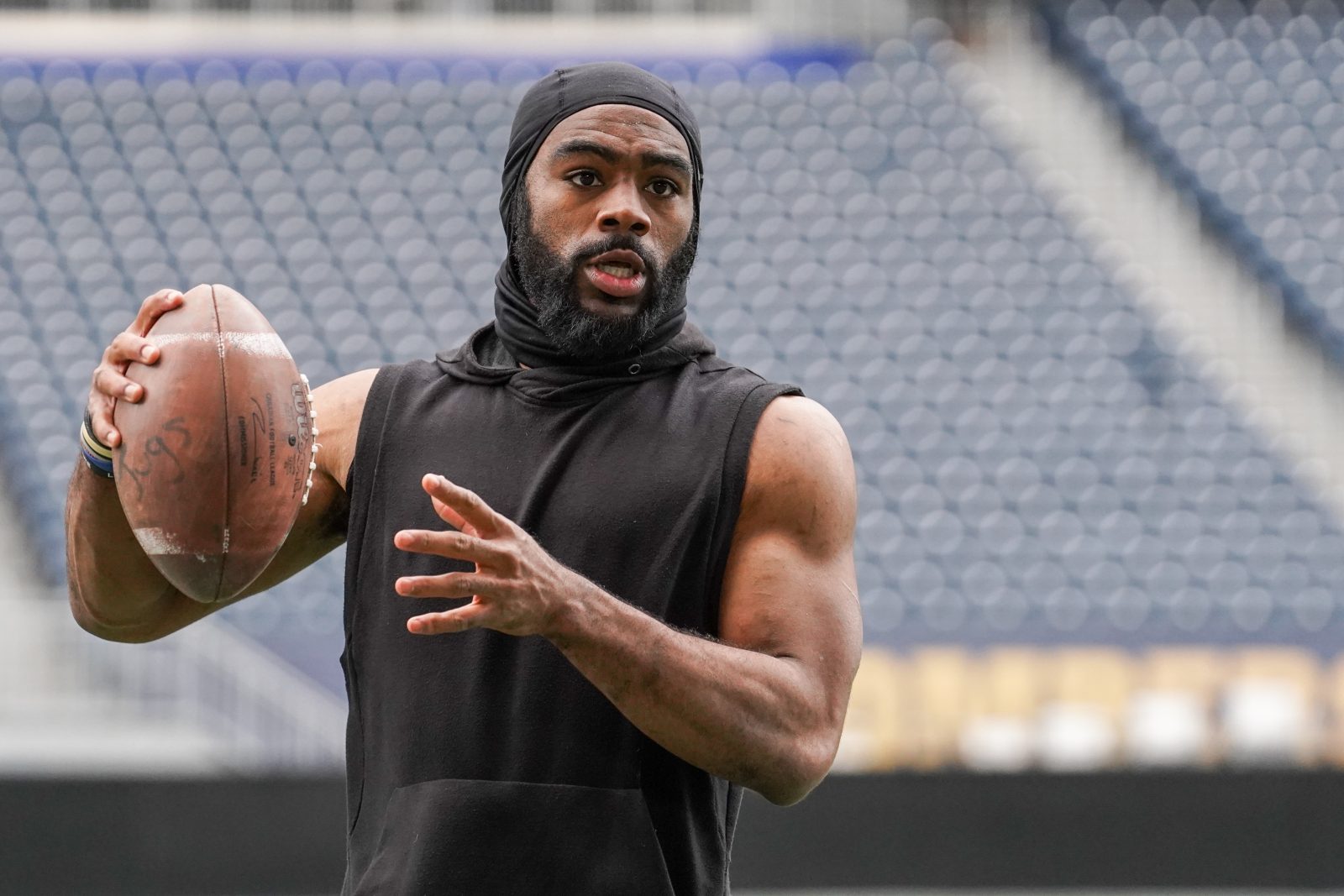 It was a moment of pure joy, followed instantly by a primal scream which captured so much more than the emotions of scoring a touchdown.

There was Rasheed Bailey last Friday in Edmonton, latching onto a Zach Collaros pass for a 26-yard TD in a 24-10 victory over the Elks that kept the Winnipeg Blue Bombers perfect at 7-0, and then jumping up off the turf and mimicking tearing the proverbial monkey off his back and kicking down a wall in front of him.

Words don’t do the scene justice, but it was wonderfully captured in this clip by bluebombers.com videographer Josh Kjarsgaard.

And so, it was following practice on Tuesday when it was suggested to Bailey that he ‘needed’ a moment like that, or if ‘need’ was even the right term to use.

“I ain’t going to lie… I think it was more than ‘need’,” Bailey began. “I think it was like I was starving. When you work so hard, a lot of things don’t get seen with all the things I do. It’s no secret it’s been tough, but when you finally make one and get one and see one go in – it’s like a basketball player… when you see that net go ‘swish’ it’s the same thing for a receiver when you make a big play like that it’s a statement, too.

“For me it wasn’t just a touchdown, it was letting the whole league know, everybody in the CFL, I’m still here. I’ve been here. This is what I do. I get goosebumps just thinking about it. Even the celebration and watching everybody come over, I mean, everybody knew how badly I wanted that one and it was great for our team.”

The Blue Bombers were minus six starters in Friday’s win as they continue to fight through the most gruelling stretch of their schedule, a chunk that will see them play five of six on the road and be the last team in the Canadian Football League to enjoy its first bye week with the breather coming in mid-August.

Included among the missing were safety Brandon Alexander, defensive end Jackson Jeffcoat and linebacker Kyrie Wilson on defence, and centre Michael Couture along with receivers Greg Ellingson and Nick Demski from the offence. Bailey stepped up with is first TD of the season, while Dalton Schoen continued to do his thing by pulling in four catches for 146 yards and an 81-yard score.

In the big picture, the Bailey TD got the Blue Bombers on the board in a game in which the offence struggled to stay on the field. And on an individual basis the veteran receiver needed to get into the end zone to help validate his grind during the practice week and the dirty work he does on game day.

“You really do (need the validation),” Bailey said. “You put so much work in. You’re running guys off (defensive backs, to help create space for other receivers), you’re doing stuff, you’re being a team player. It goes back to all the things Coach O’Shea talks about – a lot of people don’t see some of the things I do, but when we put the film on and the physical tape on, Number 88 is always showing up. So, pretty soon things are going to start mixing up and getting buys and 88 is going to be more in the picture. I’m excited. I’ve been telling everybody it’s coming. It’s been there, it just hasn’t been happening. I just can’t wait for it to fully blossom.”

Another receiver was injured in Friday’s win as Carlton Agudosi had to be helped from the field and indicated through his Twitter account he could be out for a spell.

Thank you Bomber fans for all the well wishes and prayers. It’s going to be a journey back but I’m glad I got to experience playing in front of the best fans ever. #ForTheW

The Blue Bombers returned to practice with Demski, Ellingson, Agudosi and Brendan O’Leary-Orange all absent. The club will hold a closed practice on Wednesday, so a better sense of who might be available won’t come until Thursday. In any case, the club just keeps rolling.

“When you’ve got a staff like we do, and a quarterback that’s throwing the ball like he is, it’s easy – but it’s hard at the same time,” Bailey said. “We’ve got guys who have been brought in since Day 1; guys who have been paying attention, guys are locked in.

To offset the rash of injuries in the receiving corps, the Blue Bombers brought back Kelvin McKnight and added him to the practice roster. McKnight appeared in eight games last year, five of them starts, and pulled in 15 passes for 96 yards. He had been released as the end of training camp this year.

“We liked what he did last year, we liked what he did in training camp,” said Blue Bombers head coach Mike O’Shea. “It’s just that there were other guys we liked a little more. He’s very versatile. He always knows all positions across the board. He works hard, so it’s a no brainer to bring him back.

“I know when he walked into the meeting room today the guys were all very excited to see him, so he’s not just a good football player, he’s a good guy, too.” 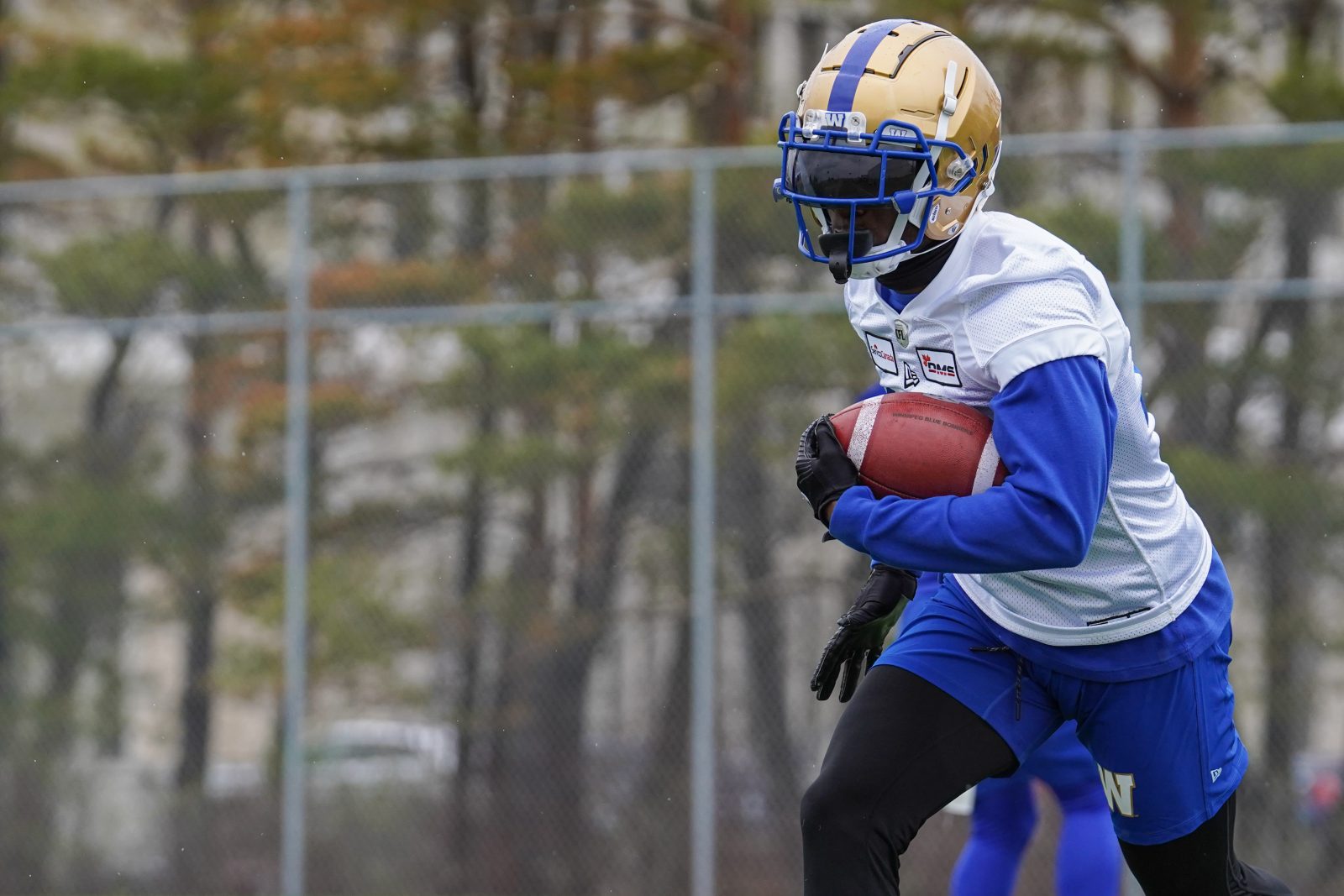 There was a long list of walking wounded at Blue Bombers practice on Tuesday.

The Blue Bombers will meet the Calgary Stampeders Saturday night in Cowtown, and the Stamps are dealing with their own issues. Head coach Dave Dickenson telling the media the club, coming off a bye week after their loss in Winnipeg on July 15th, is dealing with at least one case of pneumonia and had several players in COVID protocol.