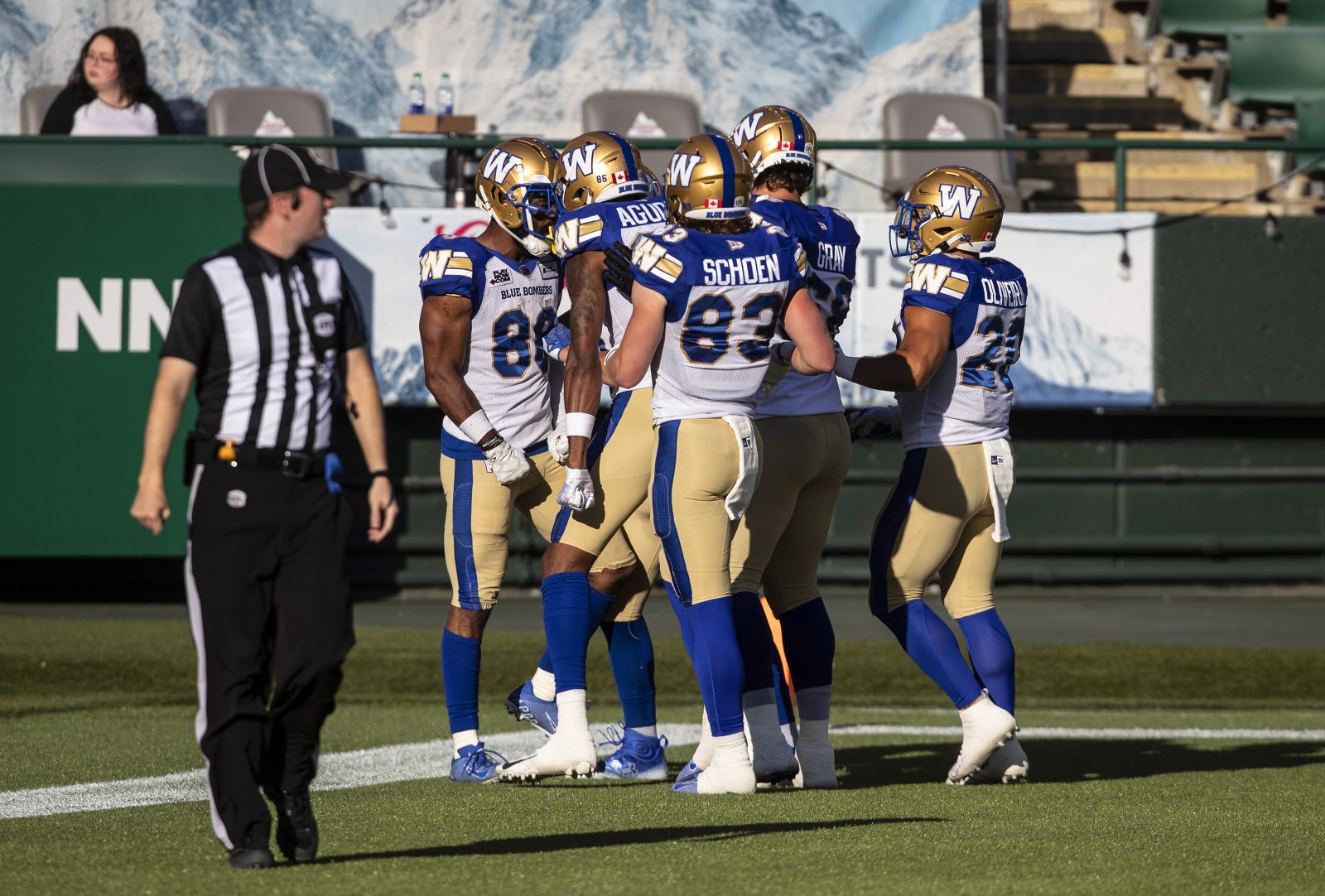 Winnipeg Blue Bombers celebrate a touchdown against the Edmonton Elks during first half CFL action in Edmonton, Alta., on Friday July 22, 2022. THE CANADIAN PRESS/Jason Franson.

EDMONTON – It could hardly be described as a masterpiece. In fact, it was the type of rendering that would have many artists painting over the canvas and hitting reset.

Yet here are the Winnipeg Blue Bombers, now at 7-0 after a 24-10 victory over the Edmonton Elks at Commonwealth Stadium Friday night in which many of the usually telling statistics were lopsided in the home side’s favour.

But in the end, while the champs were hardly at their best – especially in fielding a lineup minus six starters in receivers in Greg Ellingson and Nic Demski, centre Michael Couture, defensive end Jackson Jeffcoat, linebacker Kyrie Wilson and safety Brandon Alexander – they still managed to earn a TKO over a plucky Elks squad.

“We did enough to win,” said Blue Bombers head coach Mike O’Shea. “Our defence was pretty darn good again. They played a lot of snaps and holding them to 10 points is really good. We scored on offence and had a real nice long drive when we needed it in the fourth giving the defence a rest and getting a touchdown after starting in our end. Overall, very, very pleased. Very pleased.”

While the Elks dominated the time of possession at 37 minutes 14 seconds to Winnipeg’s 22:46, led 23 first downs to 12 and ran 30 more offensive plays, the champs relied on some big-play fireworks on offence and a stout defence that continues to get snarly in protecting their own end zone.

Winnipeg got two touchdowns through the air on big-chunk plays, the first a 26-yard Zach Collaros-to-Rasheed Bailey score following a Deatrick Nichols interception, the second a picturesque 81-yard score that saw Collaros step up in the pocket to find Dalton Schoen, who bobbed and weaved into the end zone.

Ready for more of this please pic.twitter.com/JpiRcRtVYf

The third score – a Dru Brown QB sneak – came late in the fourth quarter after a 15-play 62-yard drive that took nine minutes and 34 seconds off the clock.

“I don’t know what the final numbers were, but we won the game so we’re happy about that,” said Collaros. “We have to be a lot better offensively to stay on the football field, be more consistent on first down and convert on second down and not turn the football over.”

Collaros’ numbers weren’t jaw-dropping – he was 7-of-16 for 188 yards with the two TDs and two interceptins – but with Demski and Ellingson out of the lineup and Carlton Agudosi injuring his ankle in the second half, he was working with a revamped receiving corp. He got massive production from Schoen, who pulled in four passes for 146 yards and the score.

“That’s probably never how you want it to go – you want to sustain drives as an offence and get in a rhythm,” said Schoen. “I don’t know what the exact numbers were on time of possession, but we didn’t do a good job of that. At the end of the day, it is about making plays and so when you get those opportunities, making a big play helps for sure.” 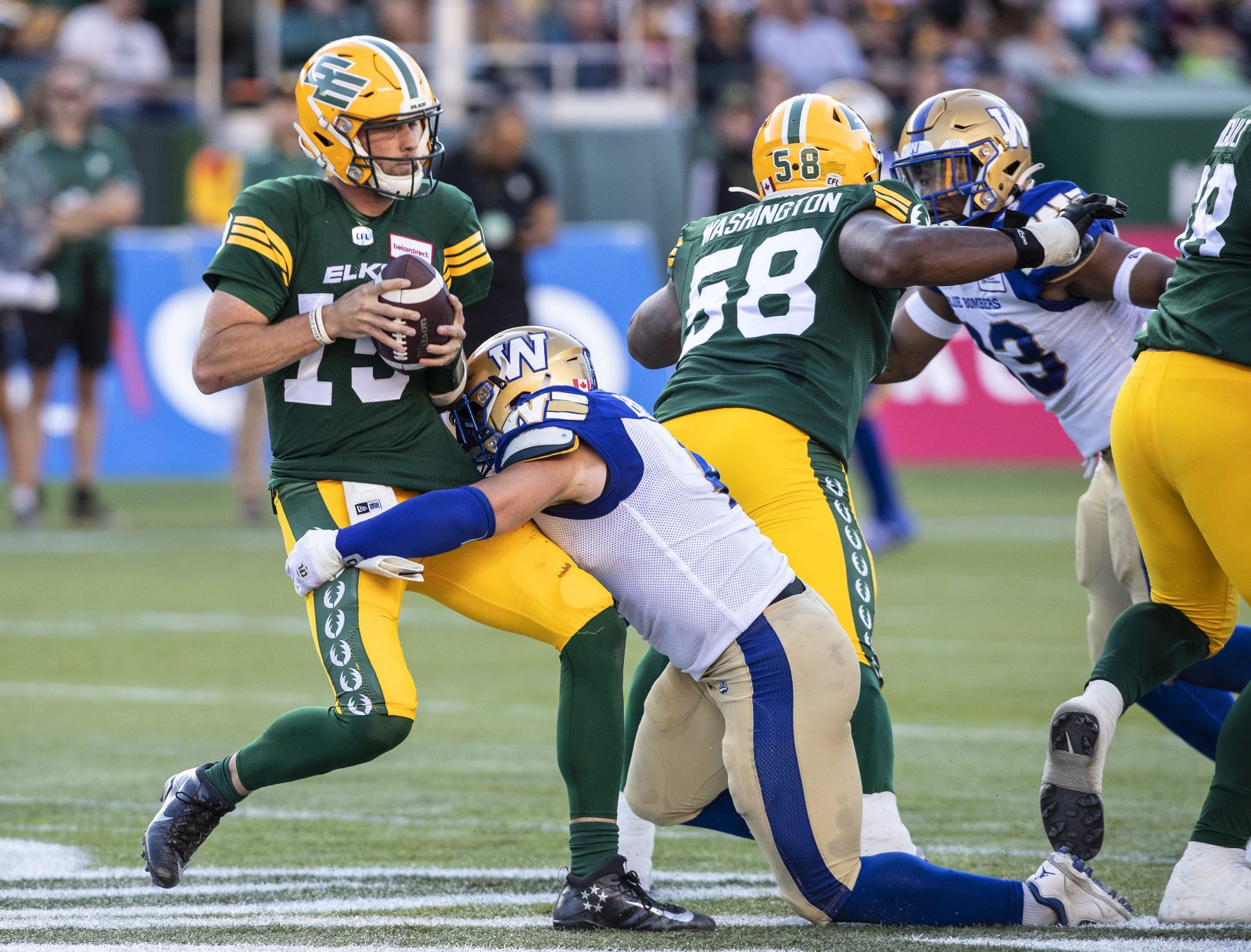 “… We’re confident as a team that the next man’s always going to be ready, number one. And number two we’re also confident that when we play our best ball we can win. It’s about executing, and we have faith in all the guys in the locker room no matter who it is.”

The defence, despite being on the field for an eternity, limited Edmonton to just three field goals and a single, 321 net offensive yards while forcing three turnovers.

“We gave up field goals. That’s important,” said linebacker Adam Bighill. “We were on the field longer than we want and kept them in second and medium and second and short maybe a little bit too much, but we made plays and kept them out of the end zone.

“We were stingy. There are things we can clean up, things we can improve. They did a good job of taking some of the holes we had but, overall, I thought we played aggressive, got after the quarterback and moved him out of the pocket a lot.”

The win means the Blue Bombers stay atop the uber-competitive West Division but are 7-0 for the first time since 1960 and just the third time in team history. And, not surprisingly, that is not a historical nugget that O’Shea is spending a nanosecond thinking about.

“I don’t spend a lot of time staring at it,” said O’Shea. “Honestly, I don’t think the players do and that’s part of it.” 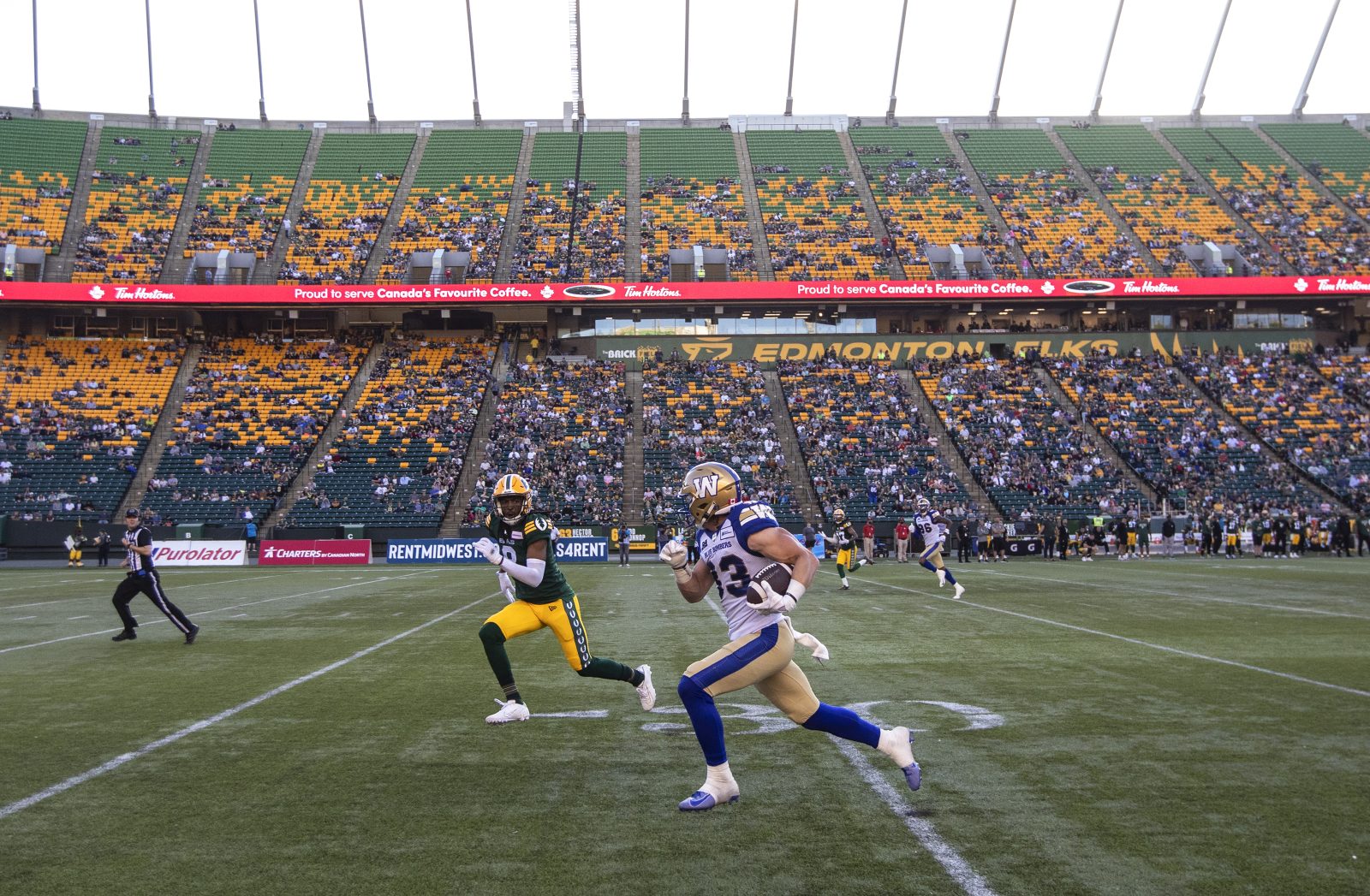 The Blue Bombers were leading 17-10 early in the fourth quarter when the club began a drive at their own 25-yard line with 12:09 remaining. The club then cranked out that long TD drive that chewed up over nine minutes of clock.

Critical in that drive – capped by the Brown QB sneak – was a roughing the kicker penalty by Malik Henry on punter Marc Liegghio that kept the drive alive.

The game stats are hardly flattering, but the Bombers defence surrendered just 10 points – and no touchdowns – in helping the club stay perfect.

Offence: Dalton Schoen, rec: The rookie pass catcher scored his fourth TD of the season and already has 28 receptions for 503 yards on the season.

Defence: Adam Bighill, LB: Led the Bombes with six tackles and added a sack in another busy night.

Special teams: A salute to the Blue Bombers kick-cover units, who were superb in shutting down the Elks return game. Nick Hallett led the crew with two special teams tackles.

NEXT: The Blue Bombers are in the most gruelling portion of their 2022 schedule, a stretch that has them playing five of six games on the road. They’ve now cranked out wins over Toronto, B.C. and Edmonton and now head to Calgary next week, followed by a trip to Montreal.