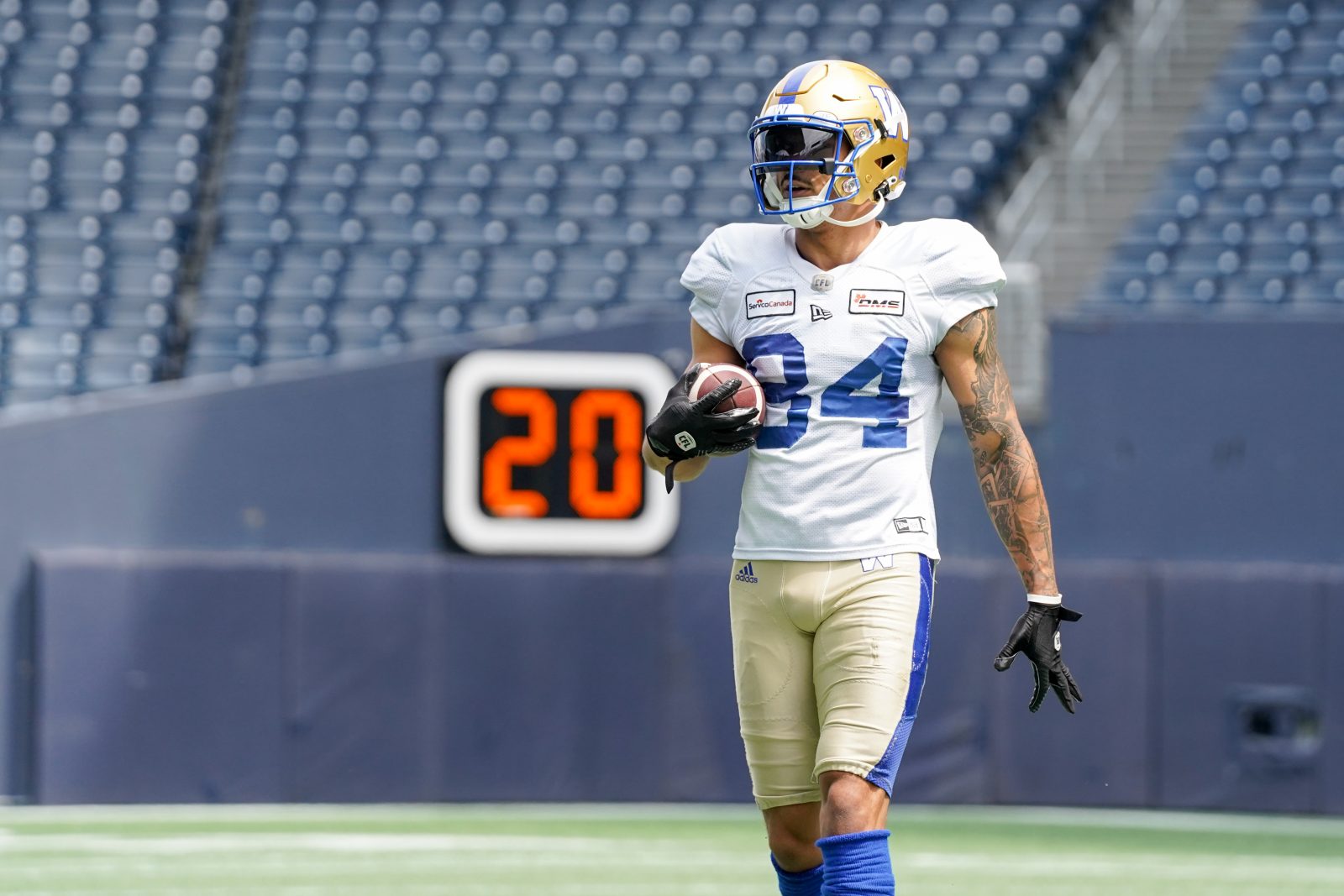 There’s a brightness in Brendan O’Leary’s smile and an obvious excitement in his voice. No wonder, for Monday night in Toronto the Winnipeg Blue Bombers receiver will make his first professional start for an injured Nic Demski.

That alone would make the moment massive enough. But sprinkled among the crowd at BMO Field will be friends and family and the two people who taught him so much about hard work, about the grind it takes to chase a dream all the while providing him with the perspective to help him understand it all.

“My mom and dad were at the Grey Cup last year and that was the first time they saw me in a game live as a professional,” began O’Leary-Orange in a chat with bluebombers.com today. “But this will be the first time they’ll be able to see me as an offensive contributor since 2018 when I was at Nevada and we played UNLV in our rivalry game. That’s a long time ago.”

The Blue Bombers saw something in O’Leary-Orange when they selected him in the fourth round, 37th overall, in the 2020 Canadian Football League Draft, even after a topsy-turvy career with the Nevada Wolfpack that saw him battle through injuries – including being stretchered off the field in a game against Oregon State in 2018 after he landed awkwardly on his neck and suffered a concussion. That was followed by a lingering hamstring injury in 2019 that crushed his production in his senior year. 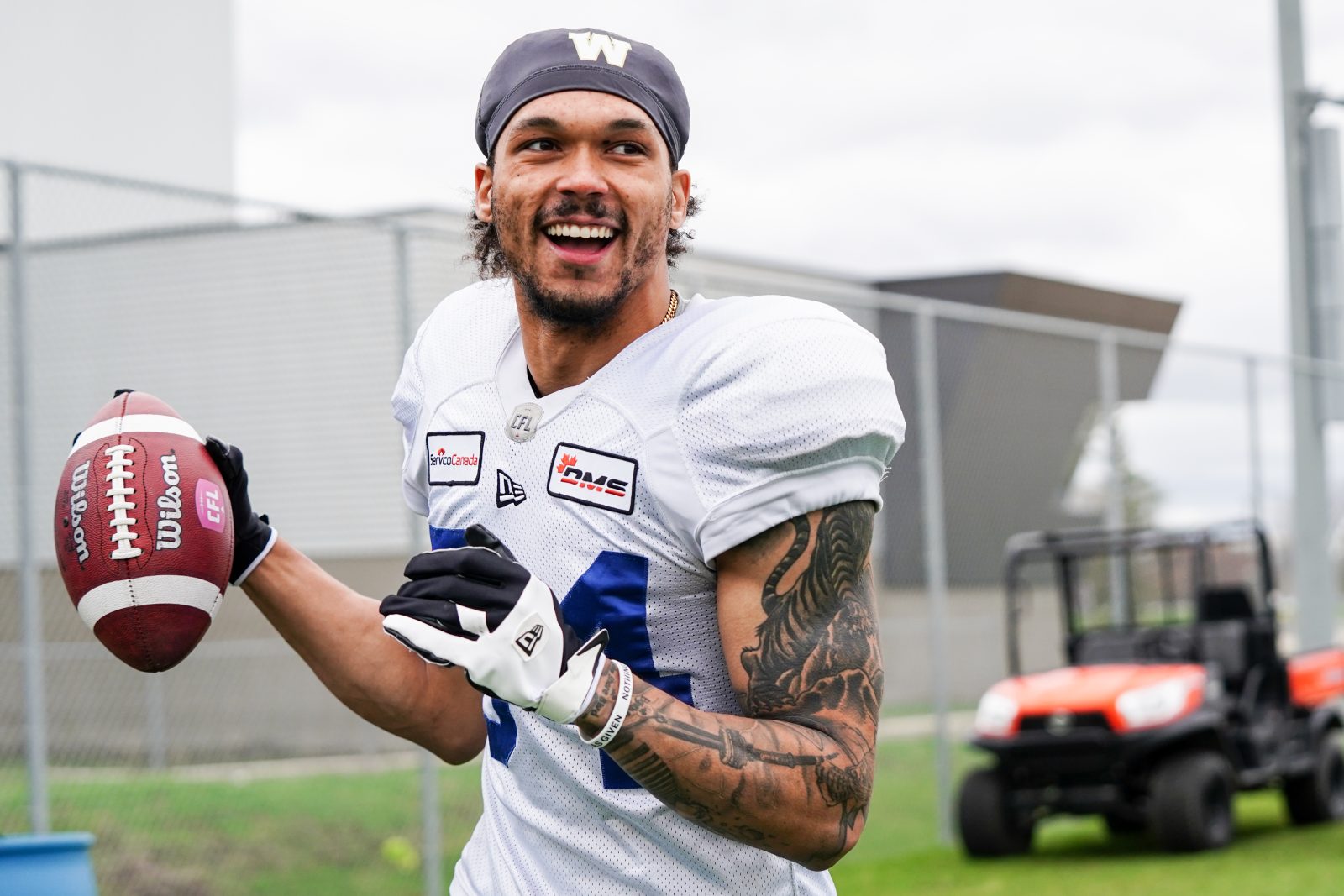 Through it all he continued to hear his parents’ voices – both in the moment, and in those snippets from his childhood that would come rushing back to him when he needed inspiration.

“My mom, she’s been teaching at Our Lady of Fatima Catholic School in Brampton for 43 years,” O’Leary-Orange said. “I watched her get up every single morning and work hard. I’ve said to my mom, ‘You should retire’, but she’s a strong advocate of the fact that when she stops working, she’s going to slow down and she’s not ready for that.

“And my dad, he just retired (from the City of Toronto Parks & Recreation Department). He’s in his early 70s, mom is in her late 60s. Work ethic is everything for them.

“It’s funny, a couple of days ago someone from Texas DM’d me on Twitter and said, ‘I remember working in Toronto for your dad and seeing where you are now is amazing.’ That resonates. I used to hear these stories from my mom telling me about my dad. He helped change a lot of lives.”

Doyle Orange, FYI, was a sixth-round draft pick of the Atlanta Falcons in 1974 who opted to come north to Canada to play. He spent 1974-76 with the Argos – rushing for 870 yards as a rookie and 1,134 in 1975, when he was named an East Division All-Star – before finishing his career with the Hamilton Tiger-Cats in 1977.

Bet Regal has the Blue Bombers favoured by 4.5 points for Monday’s game in Toronto

The over-under for Monday is 43 points.

The road O’Leary-Orange has taken to his first pro start has featured numerous potholes and obstacles, but it’s nothing compared to what his father experienced. Born in Waycross, Georgia, he played his college ball at Southern Mississippi.

“In my dad’s final year in high school they said, ‘OK, everyone has to go to school together now.’ Hearing about segregation and what he went through, that can be difficult for us to understand,” said O’Leary-Orange

“We didn’t see anything that would have been similar to his time. It almost makes you a little bit spoiled. Growing up he’d say once in a while, ‘You don’t know how good you have it.’

“When I went off to college by myself it was tough. I struggled living by myself, being by myself and being 3,000 miles from my family. And so, I can only imagine what he went through in his time being away from his family and then having all these other issues when he went to play in certain States or when he came out of high school and certain schools wouldn’t offer him (a scholarship). It was such a different world.

“That’s why I’m so appreciative of my dad and everything he knows and has learned,” he added. “It shaped him to be a very wise and knowledgeable person. Seeing where he’s been and what he’s been through… having someone like that have your back really pays off.” 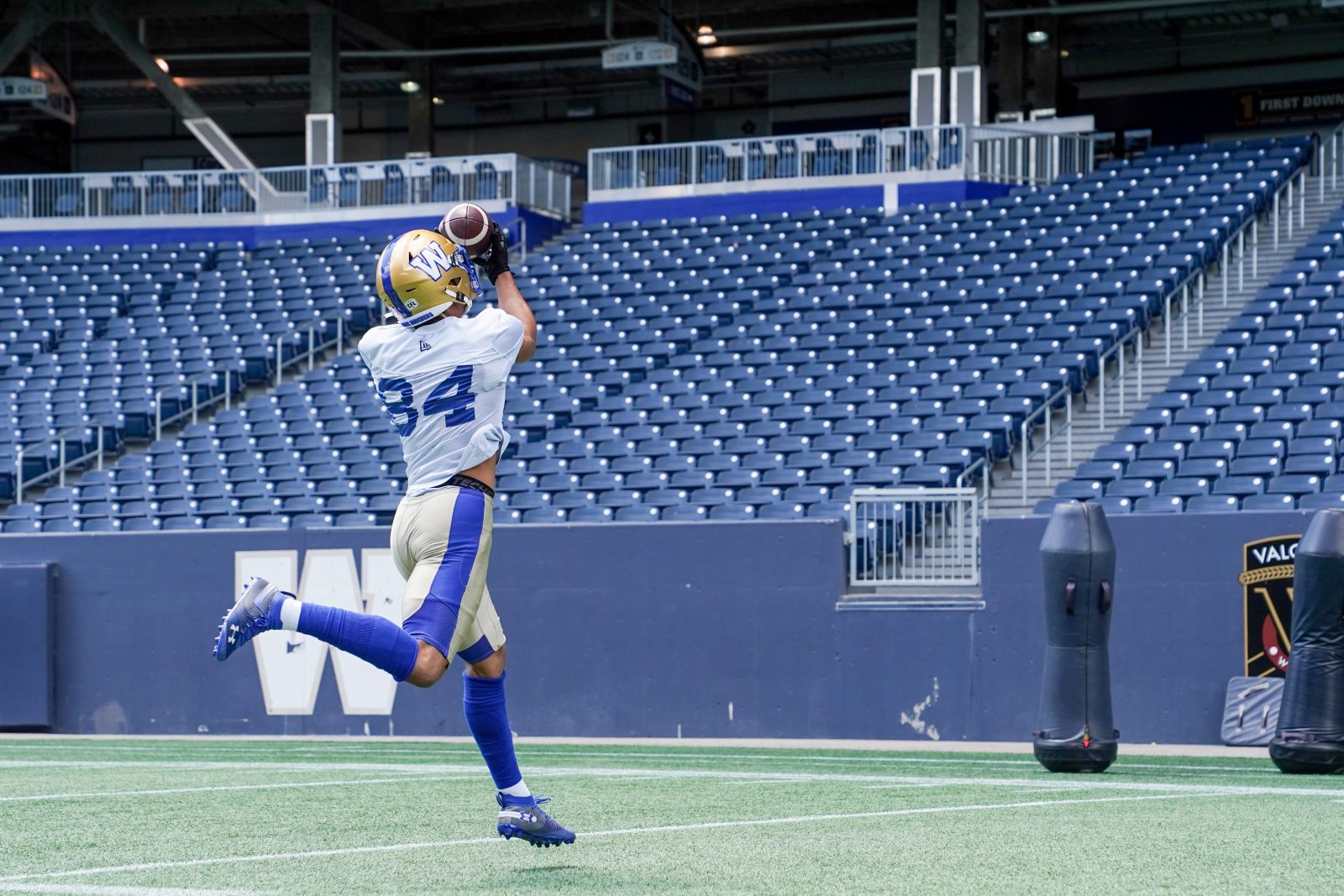 The Blue Bombers got a feel for O’Leary-Orange’s maturity when interviewing him during his draft year. What they’ve seen over the last year or so has only hammered it home even more. Limited to three games last year because of a lingering hamstring injury, O’Leary-Orange attacked his offseason training with a zeal while making sure he knew every bit of every position in the receiving corps.

“He’s matured a great deal,” said Blue Bombers head coach Mike O’Shea. “A lot of times when a young guy comes in – especially if they’ve been successful – I’m not sure they really understand the jump and the amount of work it takes. So, this offseason you saw a real change with Brendan and real positive work habits that he was developing through the offseason.

“That kind of commitment has carried over right through training camp and has shown that he’s dedicated to his craft and wants to be the best pro football player he can. His study of learning the different positions and his knowledge of that… after practice the other day he might have been on the field for an extra hour with the quarterbacks talking about plays.”

“That to me – that growth, that maturity level, that change there – happens with a lot of guys between Year 1 and Year 2. Sometimes there’s so much change and so much is different for them they don’t know where to start. And then in the offseason they hunker down, they make a play and away they go. He did a great job in the offseason and it’s showing right now.”

O’Leary-Orange stayed in Winnipeg in the offseason and took a job working with Child and Family services as a group-home worker.

“These are great kids growing up in a tough environment,” said O’Leary-Orange. “I just wanted to give back to the community and work with kids like that. Sometimes if I give their families tickets to a Bomber game they are like, ‘That’s the guy I was working with’, but it’s more than just that. Being able to be a role model to them, it’s almost like my dad was to me.

“We’re blessed to play this game for however long we get to do it, so it’s important to be able to do something with it when you have the opportunity off the field and on the field.” 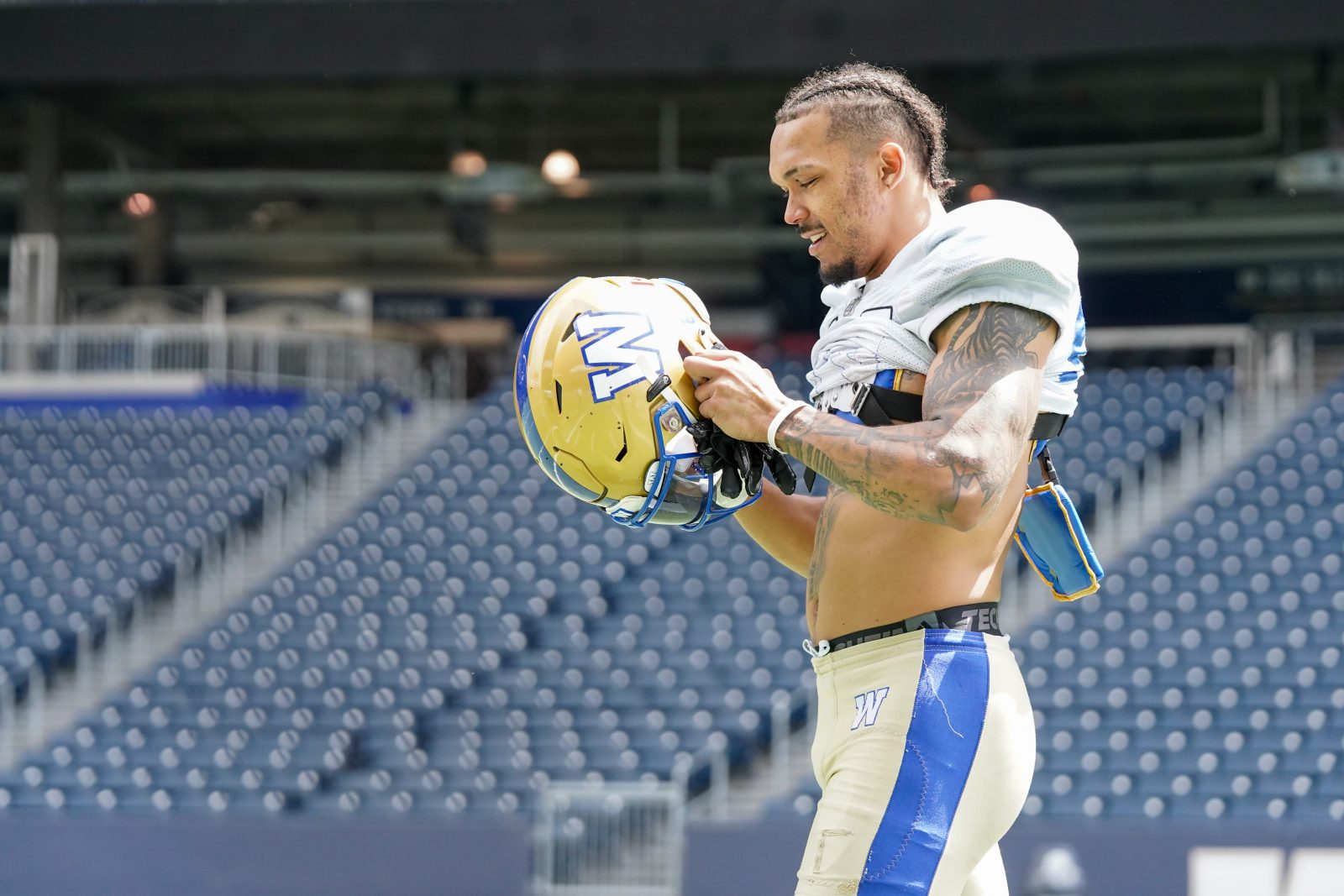 THUMBS UP TO ROURKE AND FORD:

O’Shea was asked on Saturday about the work of Canadian quarterbacks Nathan Rourke of the B.C. Lions and Tre Ford of the Edmonton Elks – who haven’t just made their club’s rosters, but are now a combined 4-0 in their starts this year.

“That’s the gist of it,” he said. “If you’re just saying, ‘Seeing a Canadian quarterback’ that doesn’t really help the game in Canada. But when Tre Ford wins a football game there’s a buzz around the CIS (U-Sports)… I was talking to my son after the (Edmonton-Hamilton) game, and he said all his groups of friends he’s accumulated over time are just on fire with this. They’re just so excited that he has that opportunity, and he did well with it. There’s just a, as he put it, a real buzz about last night. Everybody was so excited and that’s important.”

O’Shea grew up as a CFL fan in an era where Canadians starting at running back was rare. Even more so was the thought of Canadians at quarterback.

“We grew up watching the CFL. I didn’t have cable and didn’t watch much of the other league,” he said. “I said this a long time ago… I had a picture of Hec Pothier (the long-time Edmonton tackle) in my locker. I wasn’t playing O-line, but we liked the CFL and looked up to guys and when we took the football field, we probably dreamt of making it and playing pro sports.

“Rourke and Tre Ford are very positive for the young football players in Canada.”

“It must have been the beard and the beer… I don’t know,” said O’Shea with a chuckle. “It’s funny. We laugh about that often. He was a helluva player. It’s just one of those things.”