“This is the place I wanted to be from the beginning” 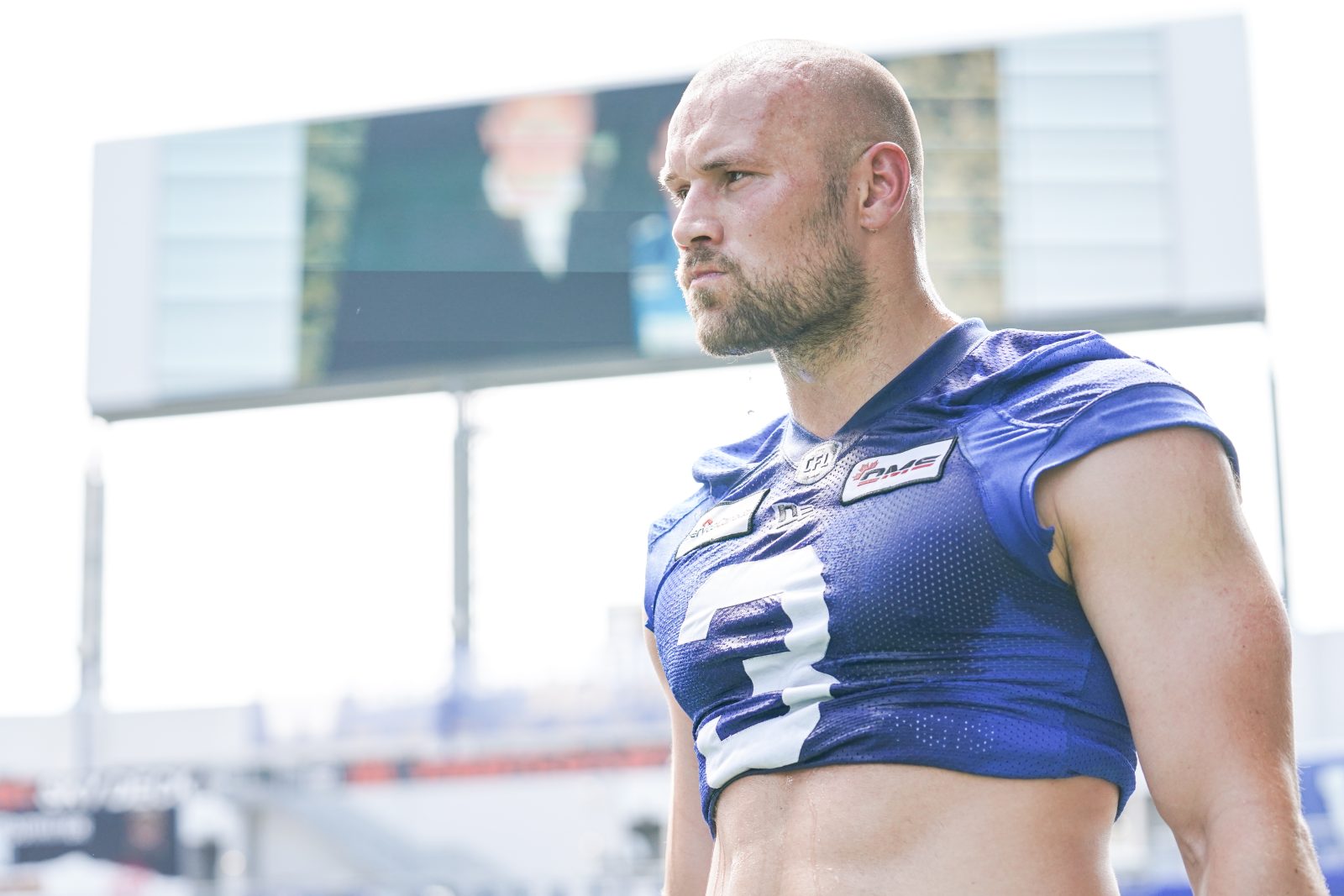 “This is the place I wanted to be from the beginning”

It was all but a given that Thiadric Hansen would be amped to be back with the Winnipeg Blue Bombers. After all, the big German defensive end brings a passion to daily practice and learning that was infectious from the first day he stepped onto the field during rookie camp in 2019.

In fact, it was a regular occurrence during his first two years here for practice to essentially come to a full stop as teammates watched him violently toss around a tackling sled.

Having said all that, the Blue Bombers medical staff got a hint of Hansen’s excitement to return – he signed a two-year contract on Saturday – when he was brought in for testing prior to hitting the field on Monday.

“I came here at one in the morning, just went to bed, woke up at 4 in the morning and I was ready to go,” Hansen said after practice. “I was excited. I had the medical tests and they took my blood pressure and it was high already. I was like, ‘I’m just pumped and ready to go.’

“Now I’m starting to get a little bit tired. I’ll just fight through the first two days, fight through it so the jet lag doesn’t catch up to you. (Tuesday) I should be fine.” 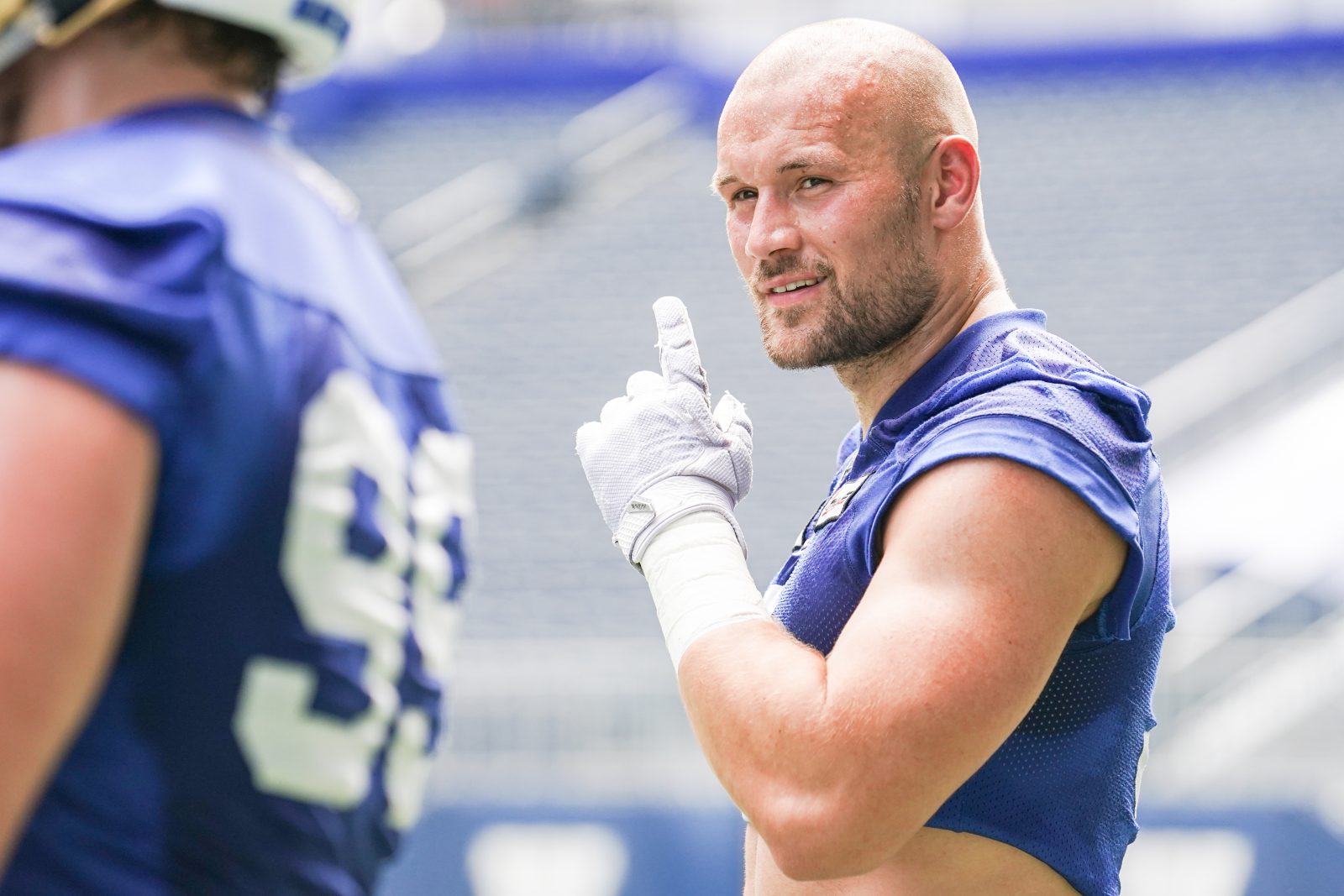 The face of the CFL’s Global initiative, Hansen had gone from project player in his rookie season to a consistent and reliable contributor along the defensive line in 2021, all the while playing the wrecking ball on special teams. But he also admittedly grew frustrated with Global players earning less than the league minimum during his first two years – a fact that will change next year as part of the new collective bargaining agreement.

Most of all, Hansen said he simply missed his teammates, being in the Blue Bombers locker room – he had been coaching during the offseason – and just the physical component of the game.

“This is the place I wanted to be from the beginning,” he said. “I’m glad they figured it out and it all came together. I love this place. I love the energy here. I love the fans so much… people from Winnipeg hit me up during the offseason and also when I didn’t show up for camp, they hit me up with ‘Come back. We want you here in Winnipeg.’ I’m glad to be back here.”

Blue Bombers head coach Mike O’Shea spoke of Hansen’s fit in the locker room and how excited his teammates were to see the big German had returned.

“When guys show up and everybody recognizes that extreme work ethic, I mean it’s pretty easy to like the guy,” O’Shea said. “And then when you get to know him personality-wise he’s a very easy-going, good-natured person. He likes his teammates, they like him.

“The football side is interesting because when players are working hard for another player to help them learn and become better and reach their potential and they are very receptive of that, that goes a long way, too. It’s not just his ability to work hard, it’s his ability to listen and take instruction from peers, too. Now it’s his turn to pass that along, to drag somebody else out with him after practice and do the work.

“He’s just another one of those guys… he’s a unique individual and he makes it work with the group. Nobody’s asking him to be any different. He’s just one of the guys.” 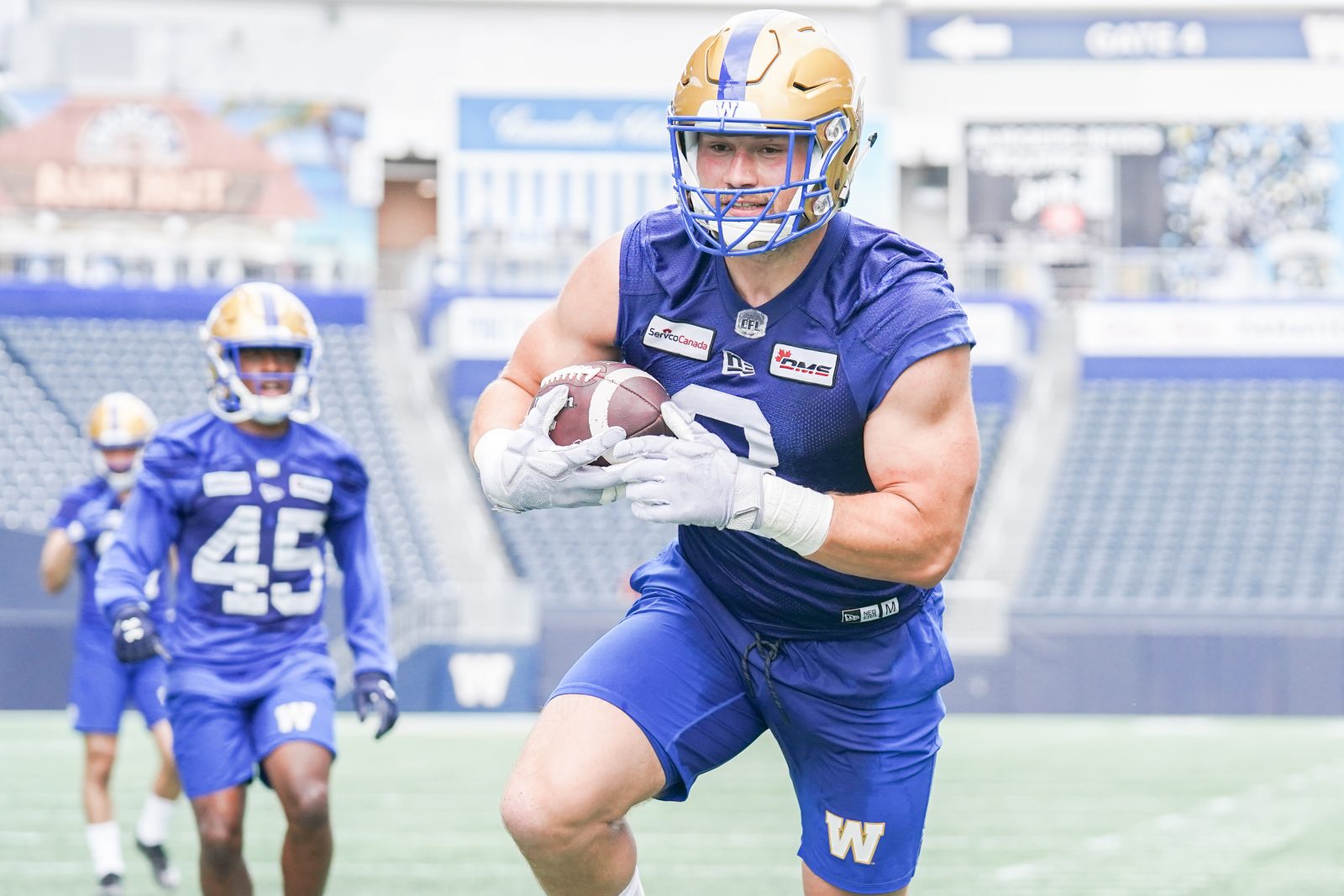 THE MAN IN THE MIDDLE:

Michael Couture did not practice on Monday after being injured in last Friday’s win in Ottawa, leaving Chris Kolankowski to work in his place at centre along the offensive line. Also taking extra work at the position were Liam Dobson and Tomoya Machino.

“I thought he stepped up very big for us in that game,” said quarterback Zach Collaros. “I’ve known Chris for a while. I train with him in the offseason in Toronto. He’s a great guy, a great football player. He works hard and he loves the game. We have all the faith in the world in him. He came in and did a great job in a tough spot.”

Kolankowski dressed for the Grey Cup last December but was thrust into the middle of the action Friday after Couture’s injury.

“You never want to see a starter go down, especially a centre – he keeps everything together on the line,” Kolankowski said. “But, again, it’s next man up if that’s the case, like today. I’ll try and fill in for Mike the best I can to keep the guys on the same page and they’re all ready to go regardless of what happens on Friday.”

Asked to describe his play up front, Kolankowski offered this:

“Gritty. Being an under-sized guy, I have to have a lot of effort, a lot of grit, gotta hit hard, be physical and then just study a lot and be well prepared. That’s what I try to be: be very well prepared for all the looks, all the situations and just be ready to go no matter what they give us.”

“He’s ready,” added O’Shea. “That’s why he’s here. He’s got a lot of grit, always has. From the time we saw him in the draft we liked how tough he was and that stick-to-itiveness. He’s an effort guy. He’s smart. Obviously he wouldn’t be here if he couldn’t do the job. He’s got all the attributes that will allow him to be successful and allow the O-line to be successful.” 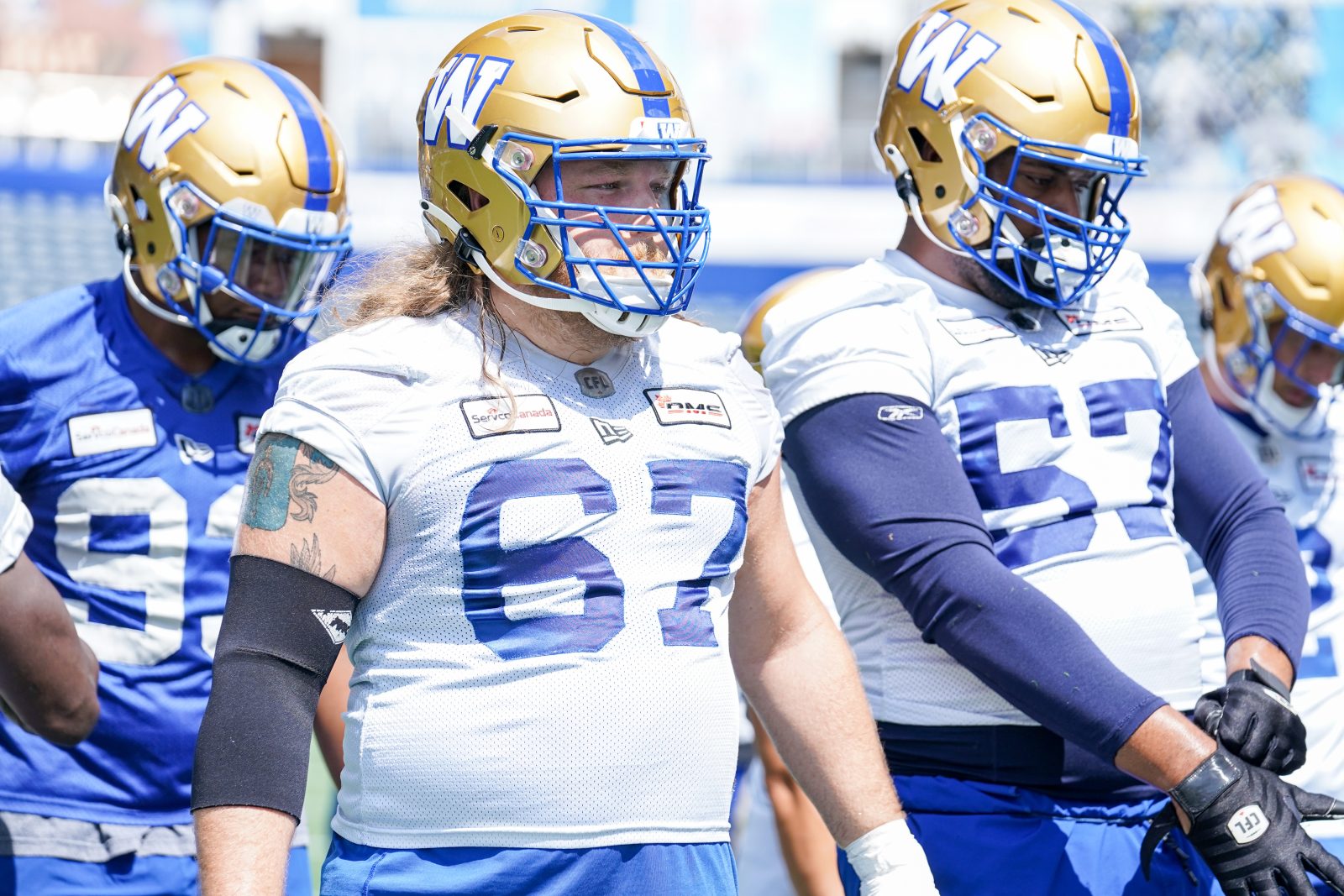 Collaros said after the win Friday he thought the club’s drive just before half-time – which resulted in a TD strike to Greg Ellingson – helped provide momentum for the offence into the second half. After stalling early with four punts and an interception in their first five possessions, the Blue Bombers then had two touchdowns, two field goals and just one punt before running out the clock to end the game.

Question is, is momentum an in-game phenomenon only, or can it carry over into the next week?

“That’s a good question,” said Collaros. “I think you can definitely build momentum with the way that you practice. So, it’s important like it is every week – I just got done talking to Biggie – to stack the good days together in all three phases. I think that does carry over into the game.

“This morning, for instance, you take in the gameplan, digest it and then apply it here on the field and make sure we get good reps on it. Then it’s Day 2 preparing, Day 3 preparing.

“We still have a lot of room to grow. Any time you can move the football you can gain more confidence as a unit but, again, it’s really just about learning about what we’re going to do this week and applying it in practice. You get confidence by just having good reps at practice.”

O’Shea wouldn’t provide an official update on Couture, saying that the club would make a more informed decision as the week goes on… Not practising on Monday were FB Mike Miller, LB Jesse Briggs, QB Dakota Prukop, and CB Winston Rose. Asked about Rose, O’Shea said ‘Winston is good.’… With Rose playing the spectator on Monday, Demerio Houston took reps at cornerback in his spot… Import tackle Cameron Durley had to be carted off the field near the end of practice Monday after suffering a leg injury.